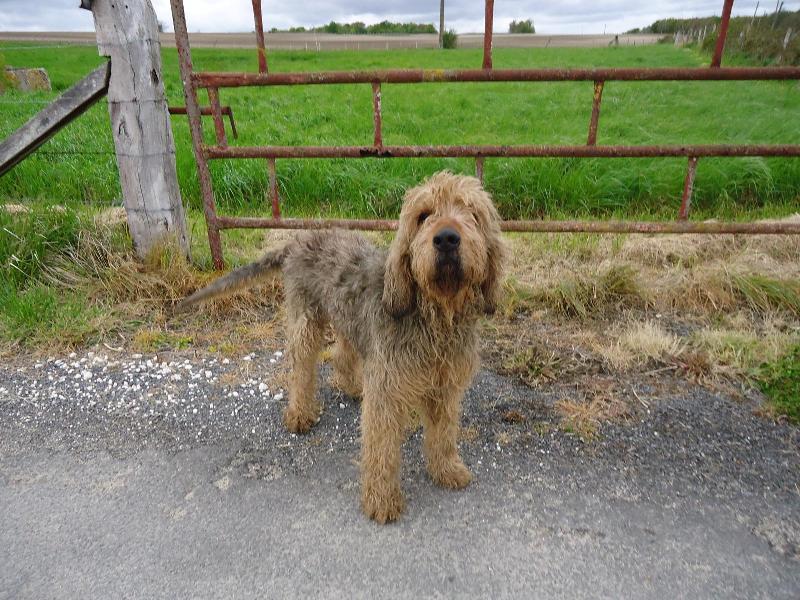 Before we met
Dédé’s move to England had been planned for a long time. He had been handed in to the SPA in Cognac some months back in a very dilapidated state but a visitor there, recognising the breed, and its rarity, got in touch the Otterhound Association in England and arrangements were made to have him taken out and into a foster home. 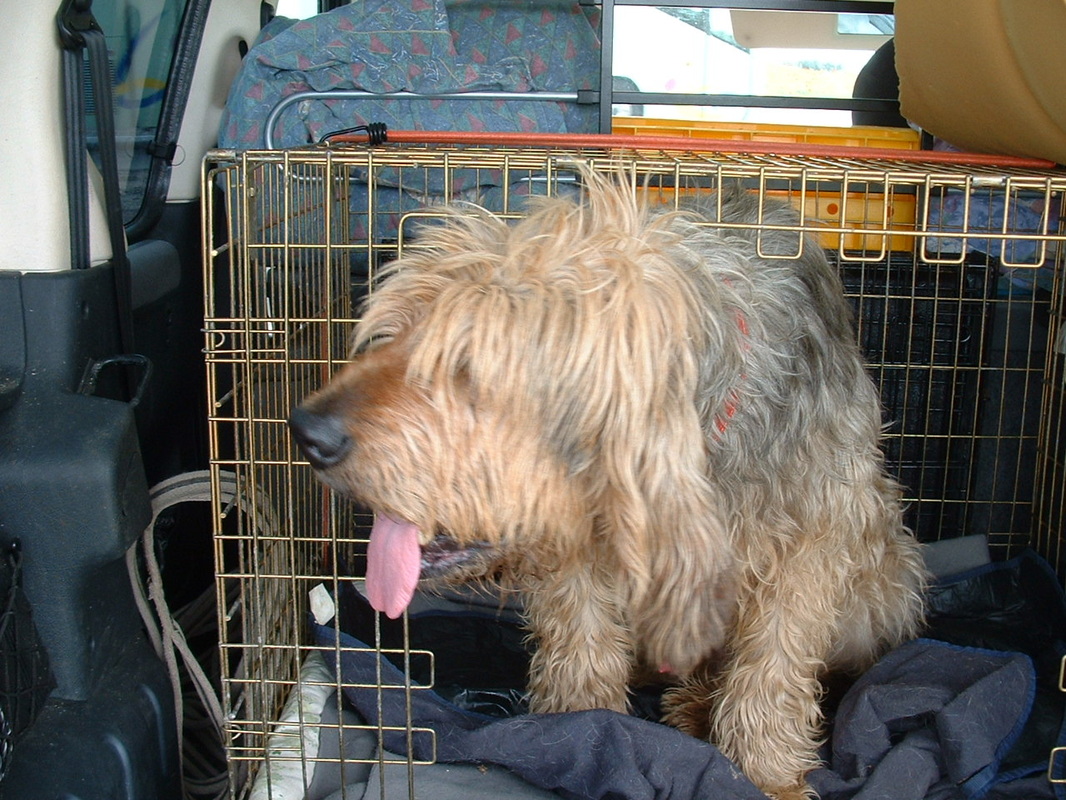 Ready to roll
Billy and Alison Gale, Otterhound owners themselves took him to their home near Chateauroux and had to leave all the windows down on the journey because of the stink! 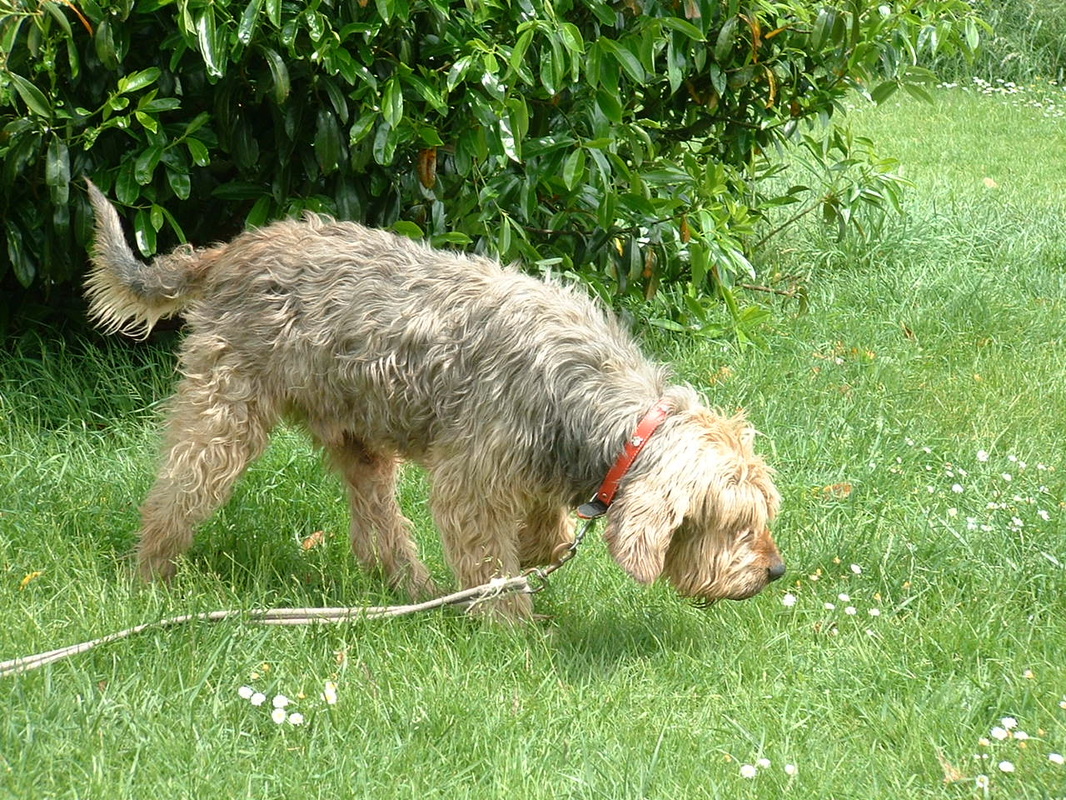 A break en route
After a long time of vet visits and documentation completion Barney, as he was now known, was ready for the move abroad. A couple near Bath had recently lost their own Otterhound and were fostering another for the Association. They were delighted to be given the chance to have him live with them permanently and agreed that if he could be brought across the Channel they would collect him from Dover. 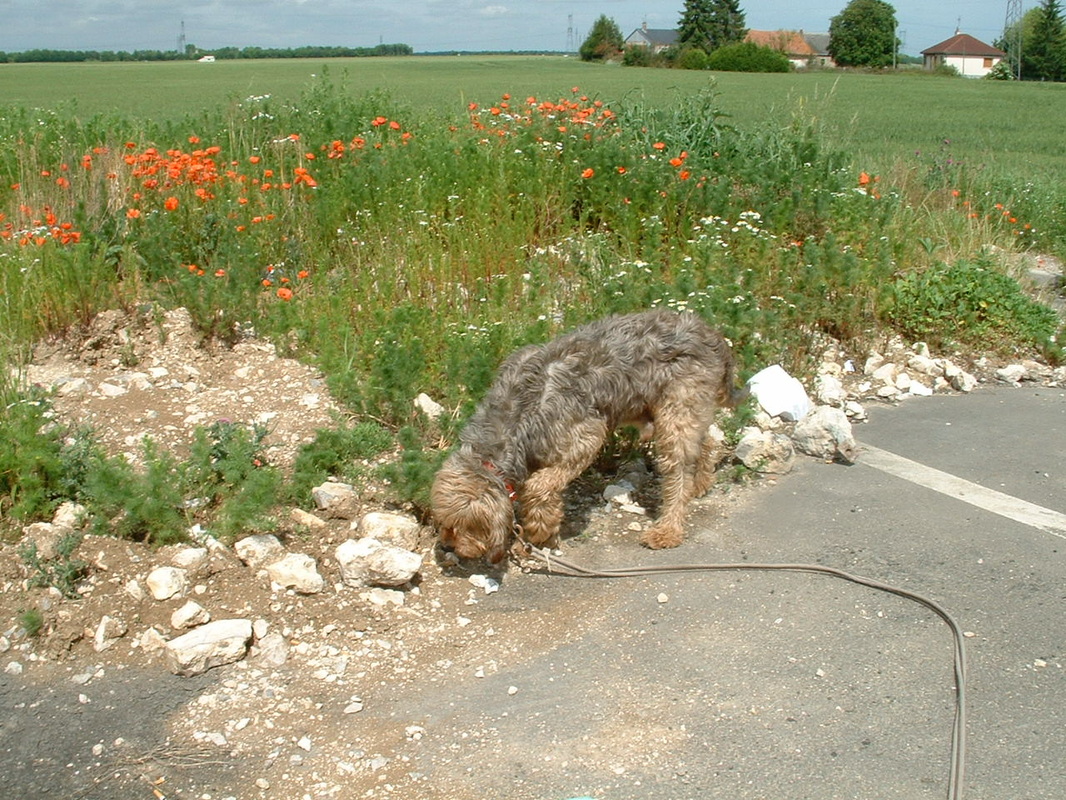 There was a time when it was thought that a saving in expenses could be made because of the impending transfer of an English Setter to Wales, but the 2 journeys could not coincide. So it was that just over a week ago I set off to spend the night near to Argenton sur Creuse, ready for the rendezvous with Allison, Billy and Barney next morning. Apart from this great big shaggy dog they also had a large bag of goodies and bedding for him, and some delicious home made scones for me. 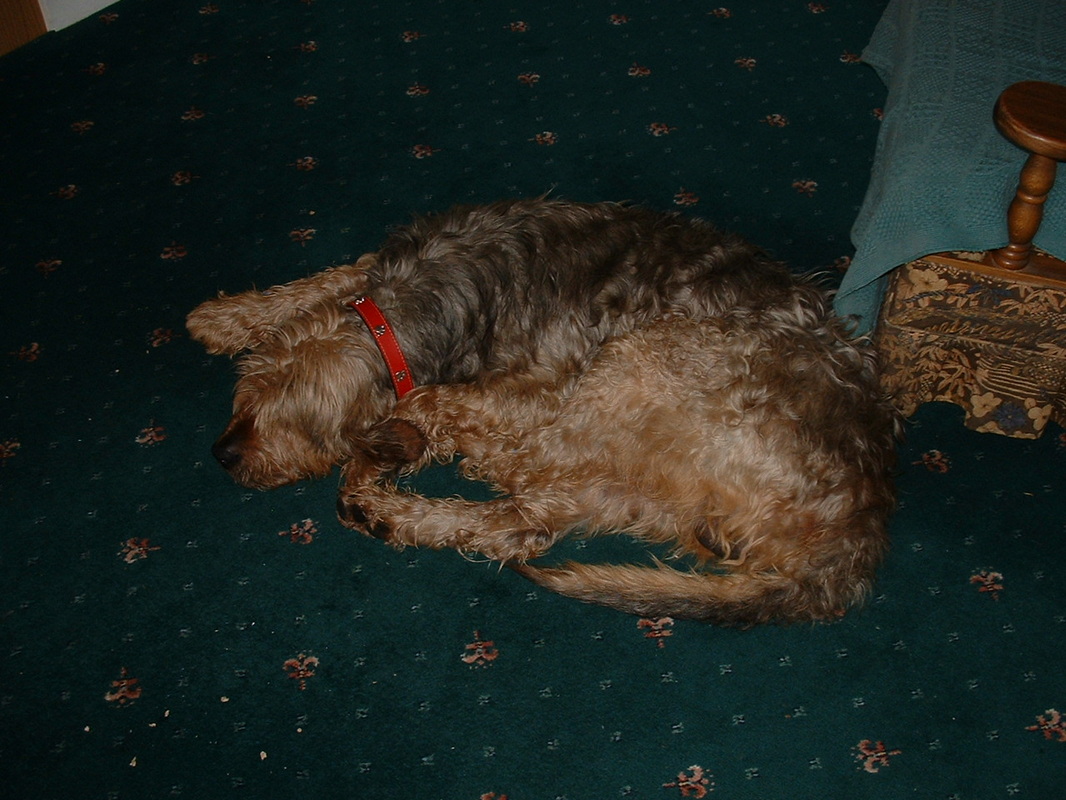 A welcome snooze at journey's end
By this time it had been decided, to save Anne and Bill, his new owners, from the long round trip to Dover, I would stick with Barney and take him all the way. The main effect of this change was that I would be spending the night in the car with my large companion and with some trepidation I set off for our overnight stop north of Abbeville.

Chez Jo is a large and very long established drivers’ restaurant but, with the car, I can park round the back away from the noise of the lorries in the morning. My main concern was to get there before the promised rain arrived as there would be a tricky job transforming a dog transport to a sleeping compartment. Luckily at 4pm it was still dry and, tying the big fellow on the lunge rein to a handy JCB the task was soon accomplished. 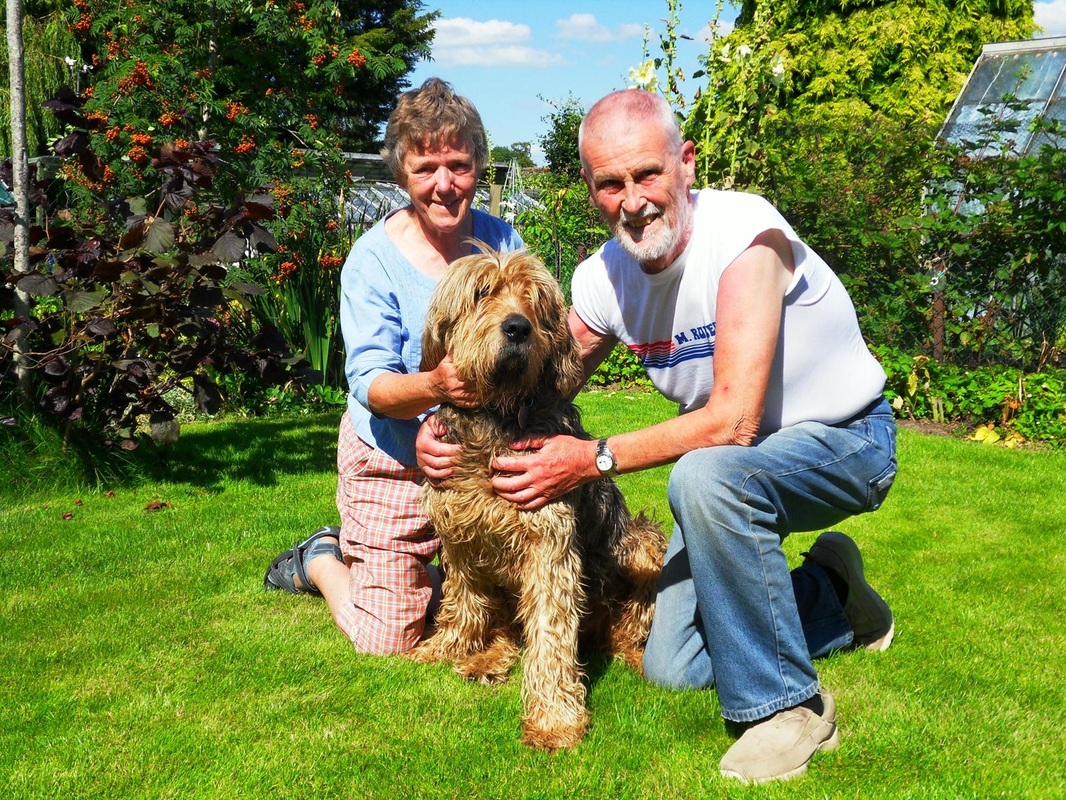 With Anne and Bill
I installed Barney in the car, with my bedding prudently covered with a large groundsheet and went into the bar for my own meal after first seeing to his needs. Back before dark I sat in the driving seat reading for a while, all the time noting the constant turning and lying down noises from the rear and hoped he wouldn’t be doing that all night. I needn’t have worried, once in bed and after 10 minutes of tramping all over me, he settled down alongside and, under the reassuring weight of my resting arm he was soon sound asleep. He didn’t budge till morning and we both slept the sleep of the just without interruption. 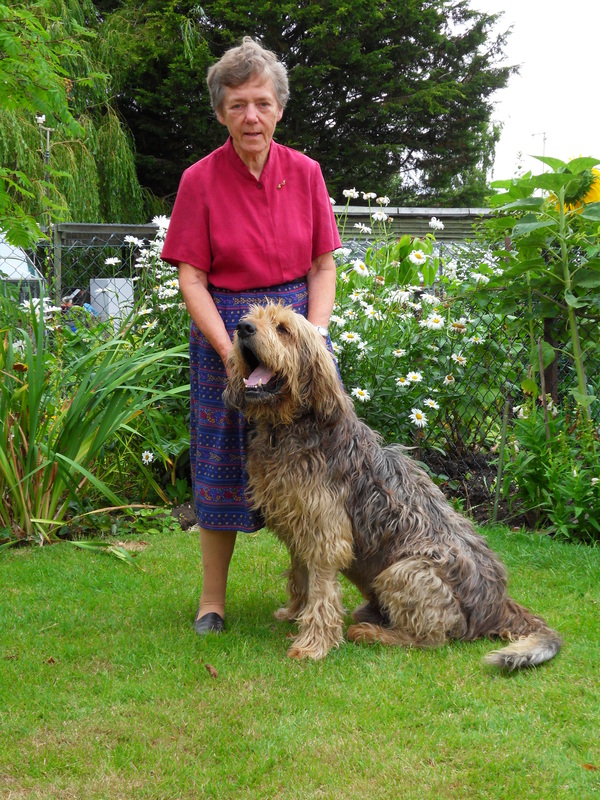 Due to the quirkiness of the P&O website I had been unable to book our passage from home and so turned up at the desk in Calais to pay over the counter. There was a moment of panic as I failed to find his chip in the usual place, left jugular, but eventually found it between his shoulder blades. What on earth was a French vet doing chipping a dog in the English position? Never mind, soon on board and after a nice calm trip, in Dover. 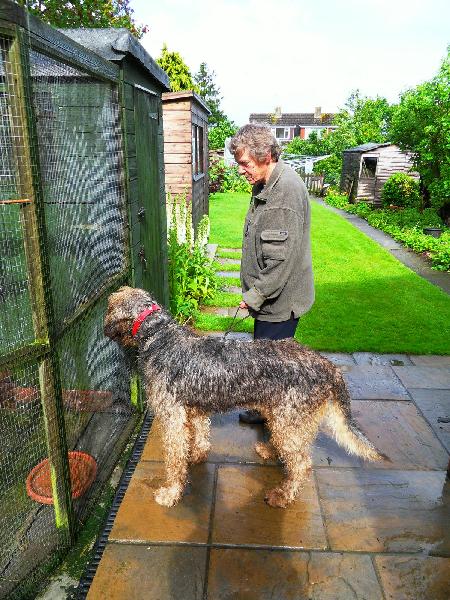 Introduction to the birds
I had allowed 6 hours for the 360 kms to Bradford on Avon but did it in 4 and we were soon welcomed into the home of Bill and Anne Riley. Barney was a hit straight away and after a tour of the garden, a drink and some food he settled down to sleep on the carpet. I was to stay the night and we had a delicious meal and a long chat before retiring to bed. I did manage to book my return ferry online this time. P&O for some reason does not like English cards with French addresses although they didn’t mind taking the extra for not booking online over the counter at Calais with one. 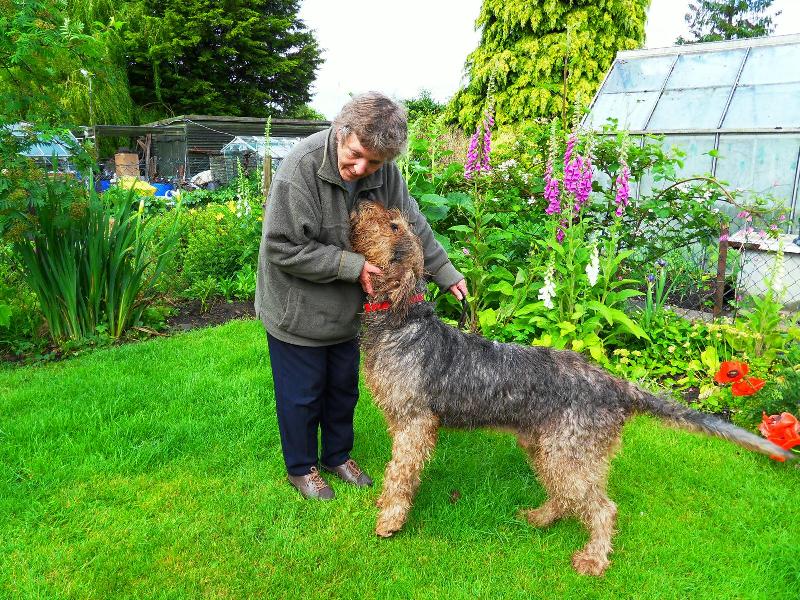 Are you my new Mum?
No rush in the morning, I wasn’t due in Dover till 3.40pm and took my time but nearly got caught out by mistaking miles for kilometres on the board and running into torrential rain and spray on the M20. I rolled into the port with 10 minutes to spare but then was unable to cross the massed lorries to get to the P&O kiosk and so had to plead with the DFDS lady to let me through. Again, I needn’t have worried; the bad weather had delayed the ferries by an hour. Funny though, as we left, the sea was calm and the whole journey was made under sunny blue skies. 10pm saw me back at Chez Jo for a welcome meal and another good sleep. 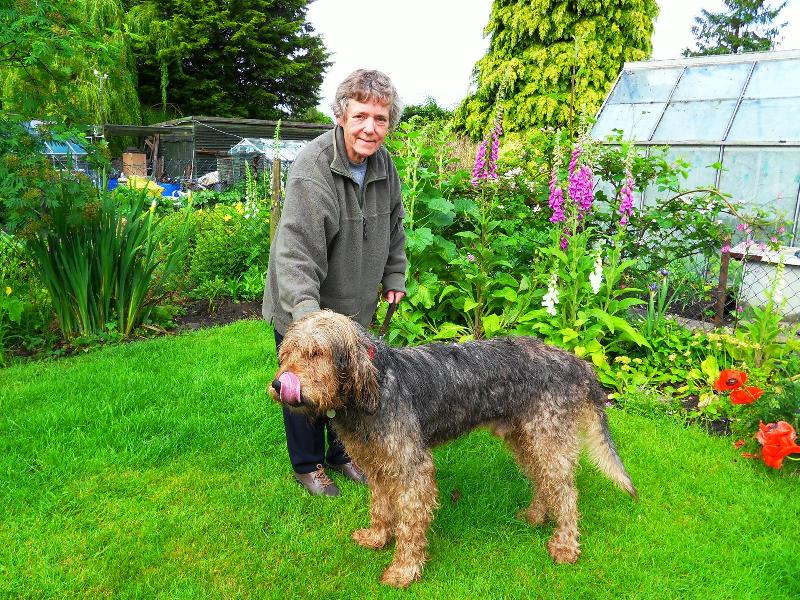 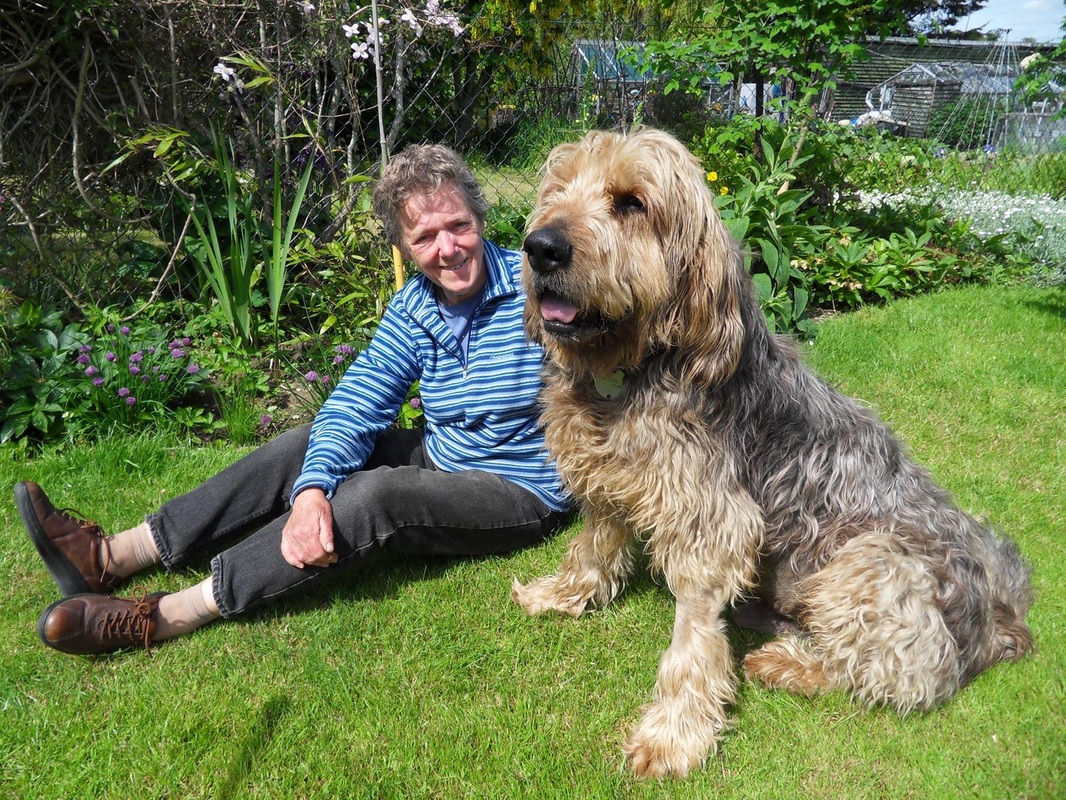 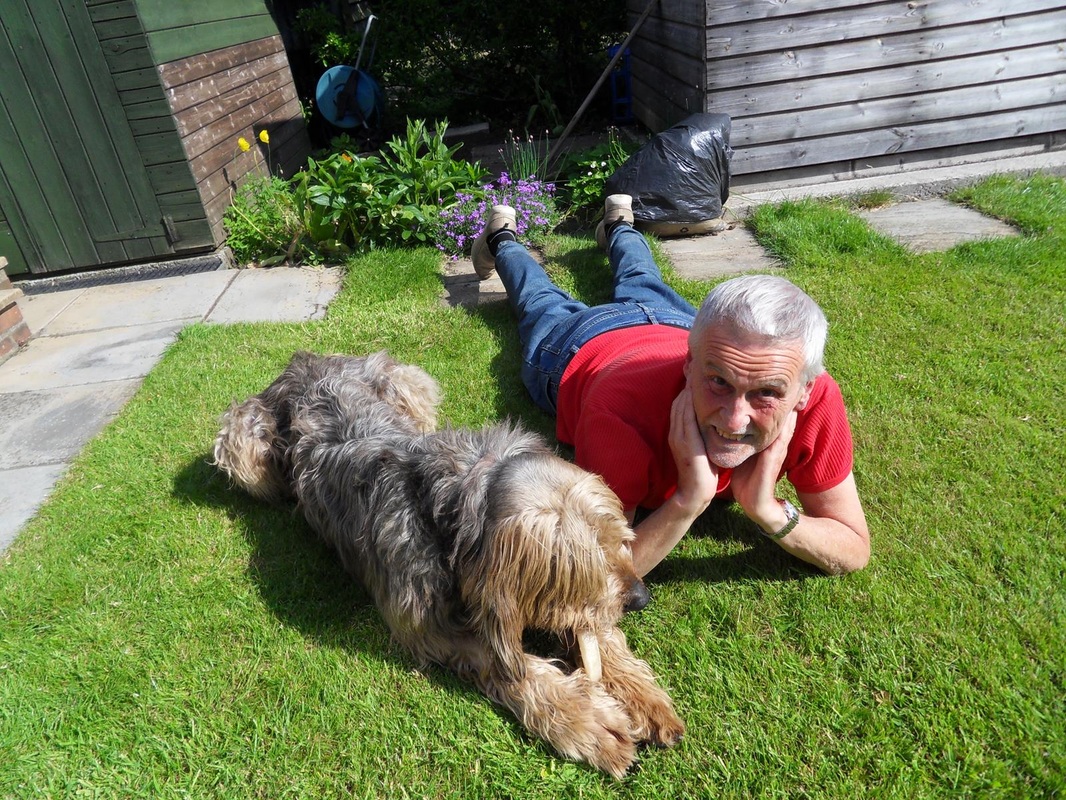 Barney, a bone, and Bill
Uneventful was the word for the run back home. I was pleased with myself for calculating accurately the minimum amount of diesel to put in to get the maximum out of my usual cheap stop at Igoville, both north and southbound.

Update - Visit August 2014
In August 2014, 2 years after I delivered Barney to Anne and Bill, I was asked to take a couple of cats to Stratford on Avon. Their stories will appear elsewhere but, suffice to say that, because of the northbound crossing being on a Friday morning and the first cheap return not 'till Sunday night, I had time on my hands in England.

After delivering the cats in the afternoon I had only 45 minutes to travel to the cottage of my cousin and her husband in a nearby village. No room to stay the night there I spent the evening with them over, and after a meal, before setting off down the road to find a suitable place to park. 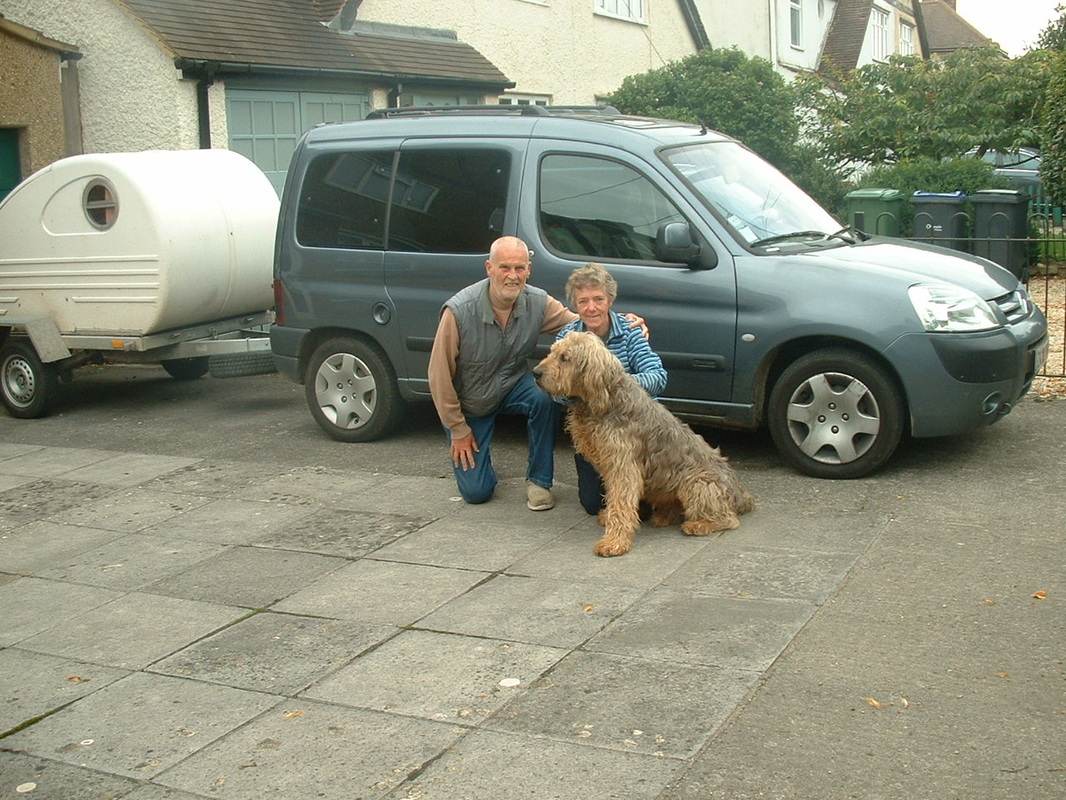 Farewell photos
The next day, Saturday, I had arranged to visit Barney, Anne and Bill. They were delighted to invite me to stay and I arrived in the morning to a big welcome from all three. We lunched together and then I went into a nearby town, Trowbridge, to find a particular item I sought. A new camcorder. I had the idea to fix it in the car and record places of interest that I pass through as well as film and photos of my various passengers, my old camera being a bit temperamental and not always producing the results desired. I followed Bill's directions to the Curry/PC World store to find a veritable coterie of black uniformed assistants huddled inside the door. Sadly not one of them appeared to have any expertise about the items on offer and had to resort to the computer screen to answer every question. However, one of the important questions I had could not be answered, whether it would fit to my standard tripod at home. The manager was asked, though not in my hearing and he apparently could not be called to talk to me personally, that all items fitted all tripods. In view of the fact that I could hardly return if it was not so I wanted proof. This was not forthcoming as they refused to remove the model I wanted to test it as it was secured to their security system by the screw hole. 'But you will have to release it or find one from stock if I buy, and I want to, so please find one that you can test'. Not possible, so I declined to buy but made a big show of noting down all the model details so I could buy it elsewhere. This I did when I got home, from Amazon France! I hope the improved results will appear in future stories. 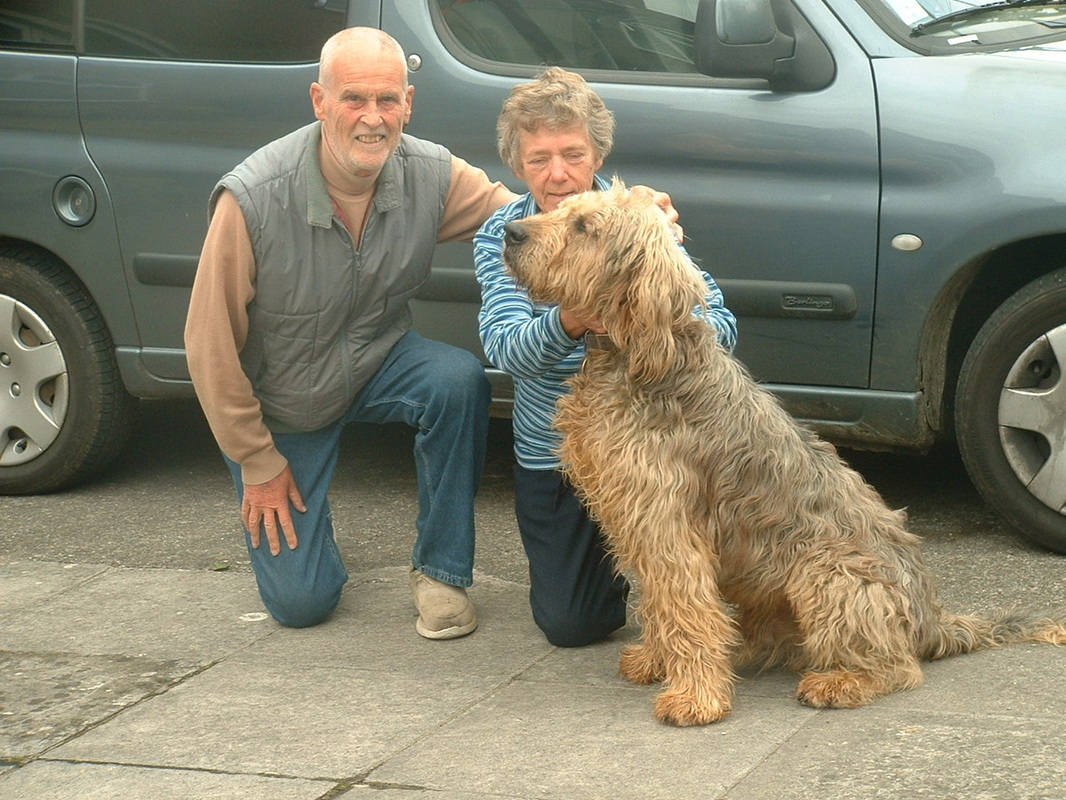 Back to Bill and Anne's, this time using the map feature of my recently purchased Garmin satnav. I worked out the route through outlying villages by using my paper map and then confirmed my progress as I went on the little screen. By using this perfect harmony of old and new technology I saved myself considerable time as the outward journey had involved an awful crawl through the centres of both Bradford on Avon and Trowbridge. 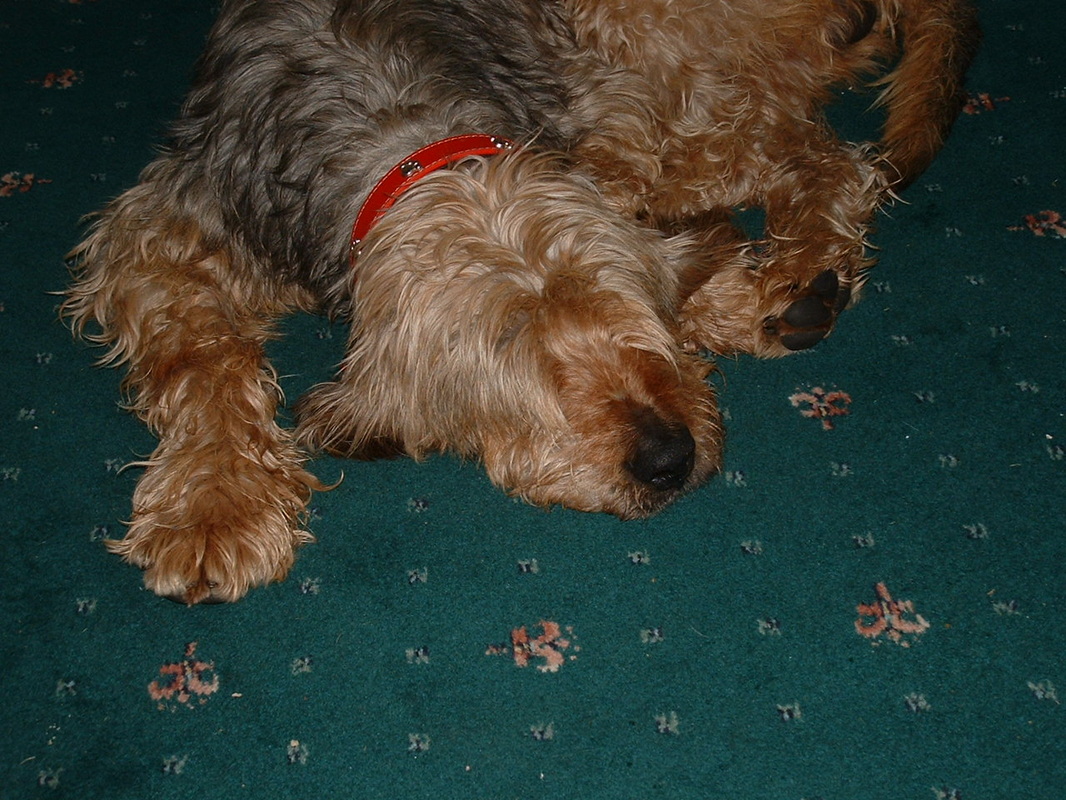 Something he's really good at
The afternoon was spent in pleasant catchup while Barney snoozed at out feet. He was in fine fettle for such a big dog especially as he had contracted, and apparently been cured of, stomach cancer in the intervening period. Bill and I watched some of the practice for the Belgian GP, he is an avid fan of motor sport and proved very knowledgable of all aspects especially my favourite period, between the wars. It was such a pleasure to talk to someone who actually knows the names I mention without needing explanation, Nuvolari, Rosemeyer, Caracciola, Seaman and Fernihough. 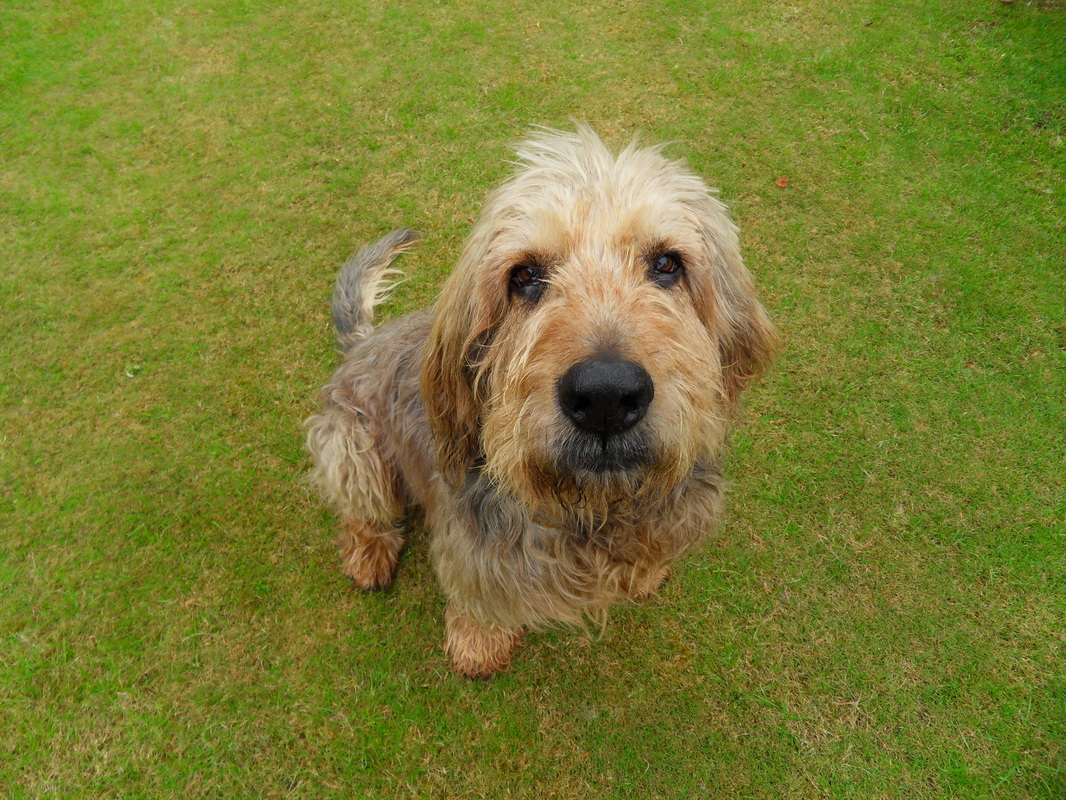 Dinner was a deliciously crisp stir fry with cauliflower cheese, both my favourites and washed down with the excellent Bordeaux that I had brought as my contribution. Hilarious interludes from Barney who has developed some deadly SBDs, possibly as a result of his stomach problems, punctuated the meal. Bill has no sense of smell, but I have, and Anne's is even more acute. The first sign we would get was Anne leaping up and wafting him vigorously with a place mat. It did not spoil the enjoyment of a thoroughly amiable evening, if anything it allowed Barney to join in. Some dogs pester at the table, some whine, some disappear altogether. Barney has his own special contribution to the proceedings and I for one did not object one bit. 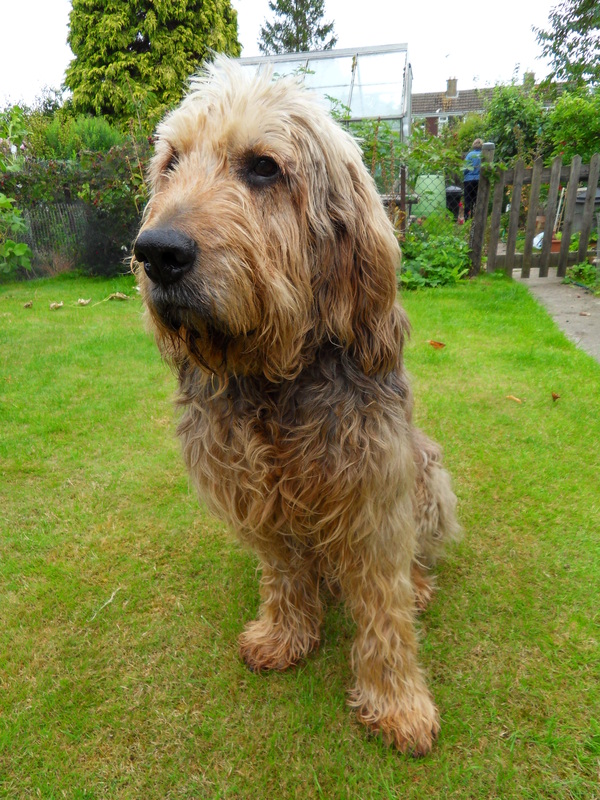 Another fine day in the morning as I joined Anne and Barney in the garden. No rush for or after breakfast and we had time for a brief photoshoot before my departure at about 11 o'clock. The run towards Newhaven was easy and only at one point did I encounter any serious traffic problem. This was at Arundel as I was heading for my cousin's at Worthing so that we could have our usual evening meal out before my gentle run to the port for the 11pm ferry. 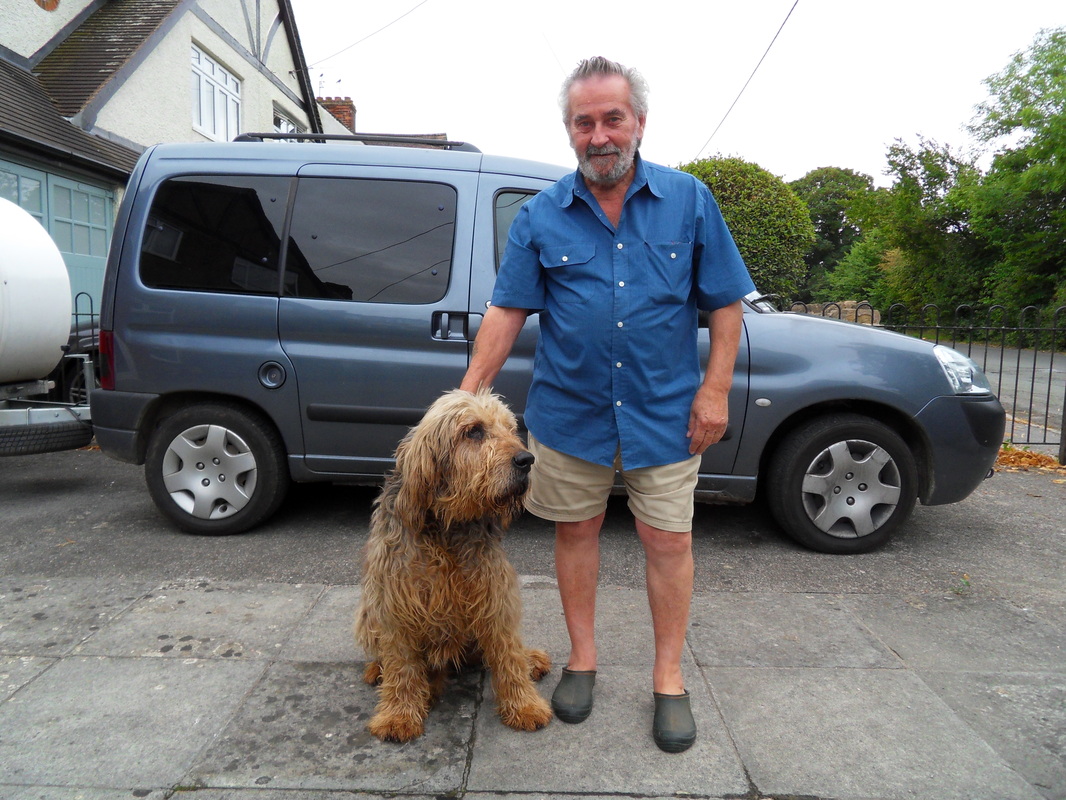 2nd parting
This was a Sunday night before the August Bank Holiday and I was surprised that the fare had not been hiked for the occasion. When I booked I had no idea so was not surprised at the time. However, it was a popular sailing and the queues, four side by side, stretched almost to the roundabout.