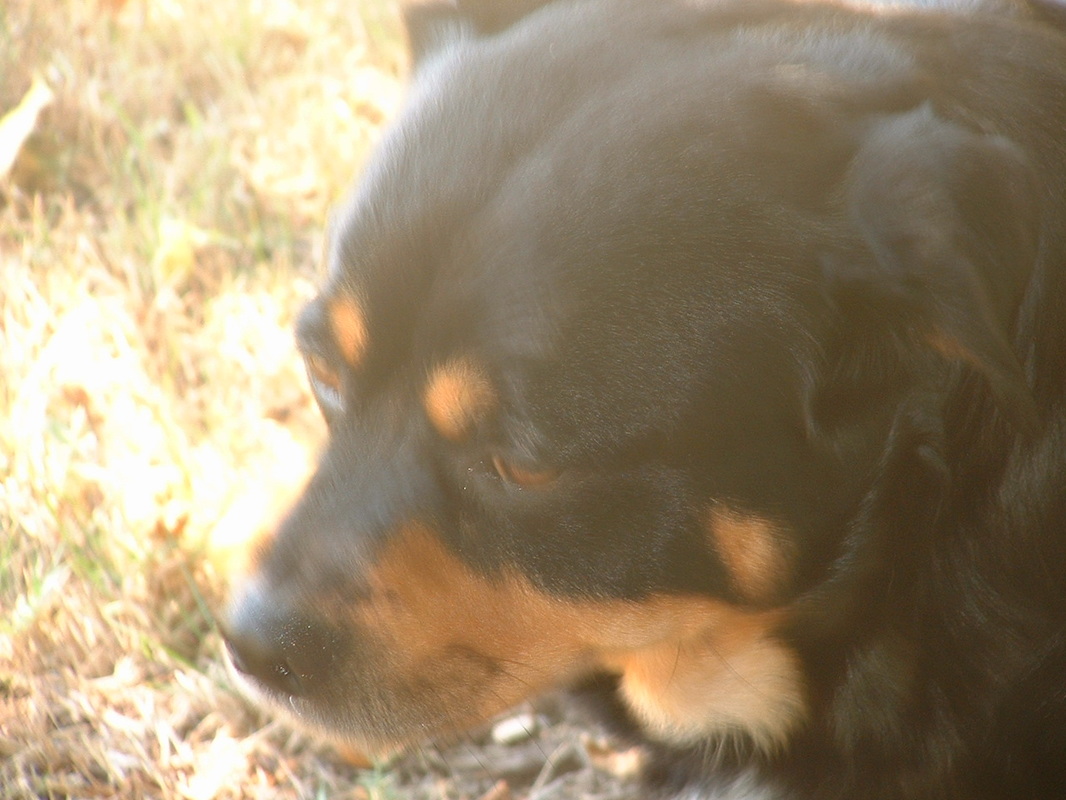 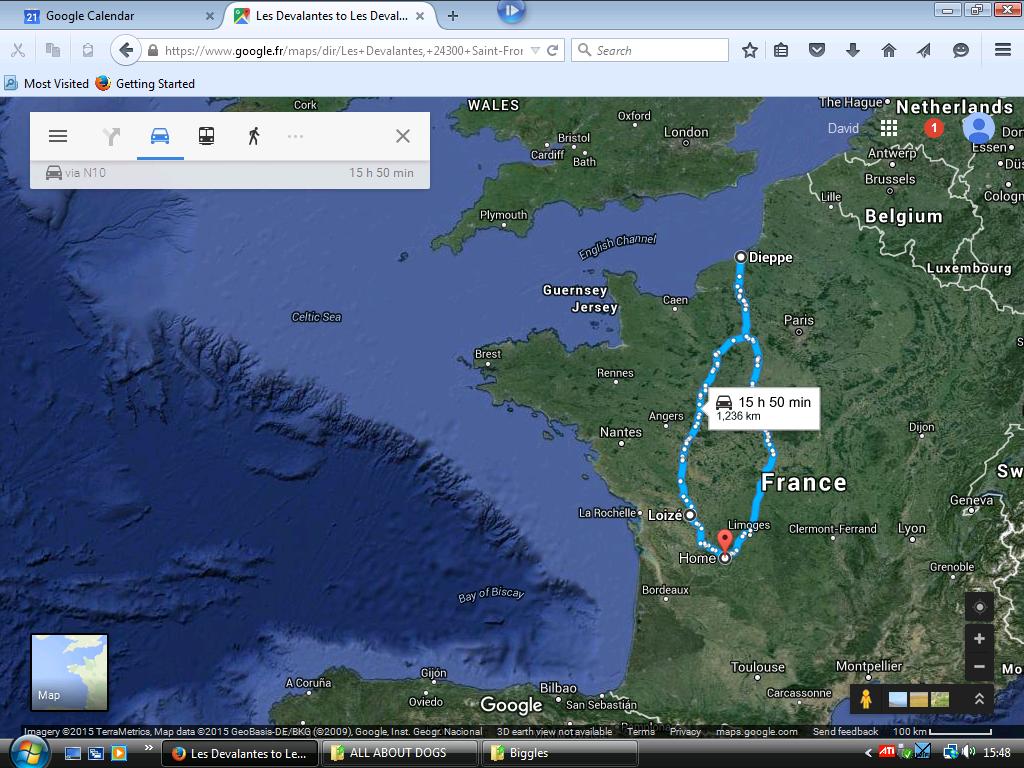 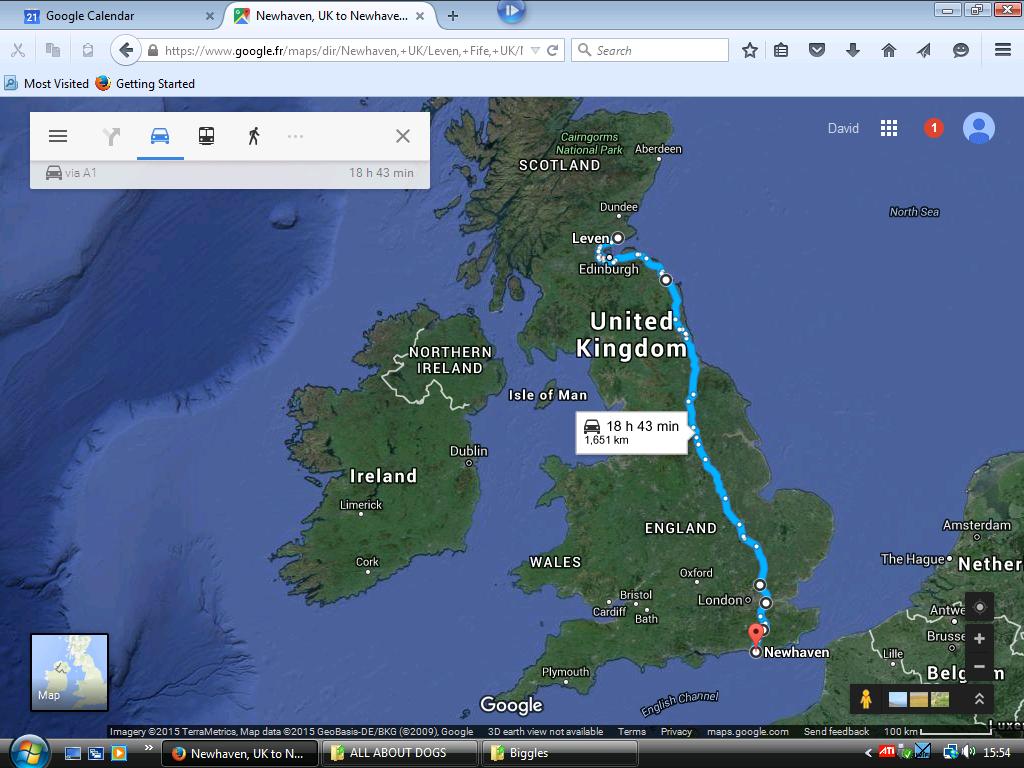 In July of 2015 I was asked to transfer a dog from the Deux Sevres department to the owners' new home in Scotland. The date was fixed for August the 10th but, due to summer schedules on the ferries from Dieppe, there was no need for an early start from home. Normally I use a full day to get to the port, where there is a handy routier in the old docks, eat and rest the night there and then do the 5 minute journey to the ferry early the next morning. However, as my sailing was not to be until 12.30 in the afternoon, there was no need for this and so I collected Biggles from his former home village at around midday and went only as far as a large routier restaurant, The Motel du Peage, about 30 kms north of Chartres. 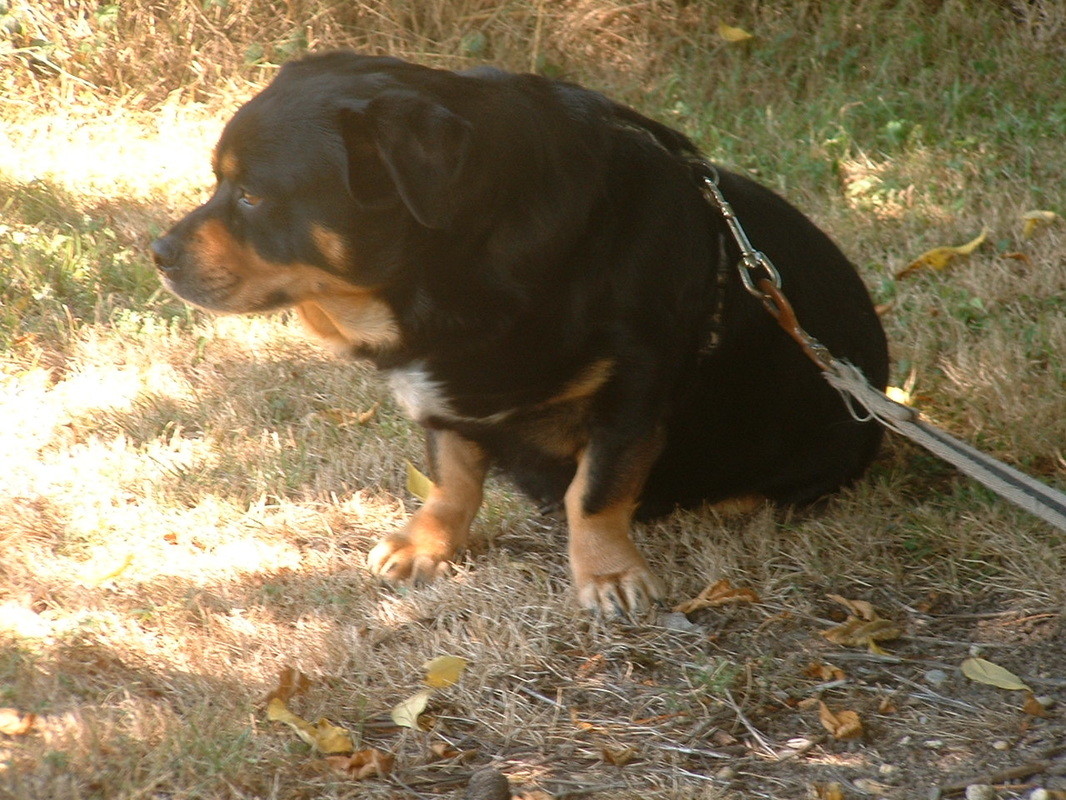 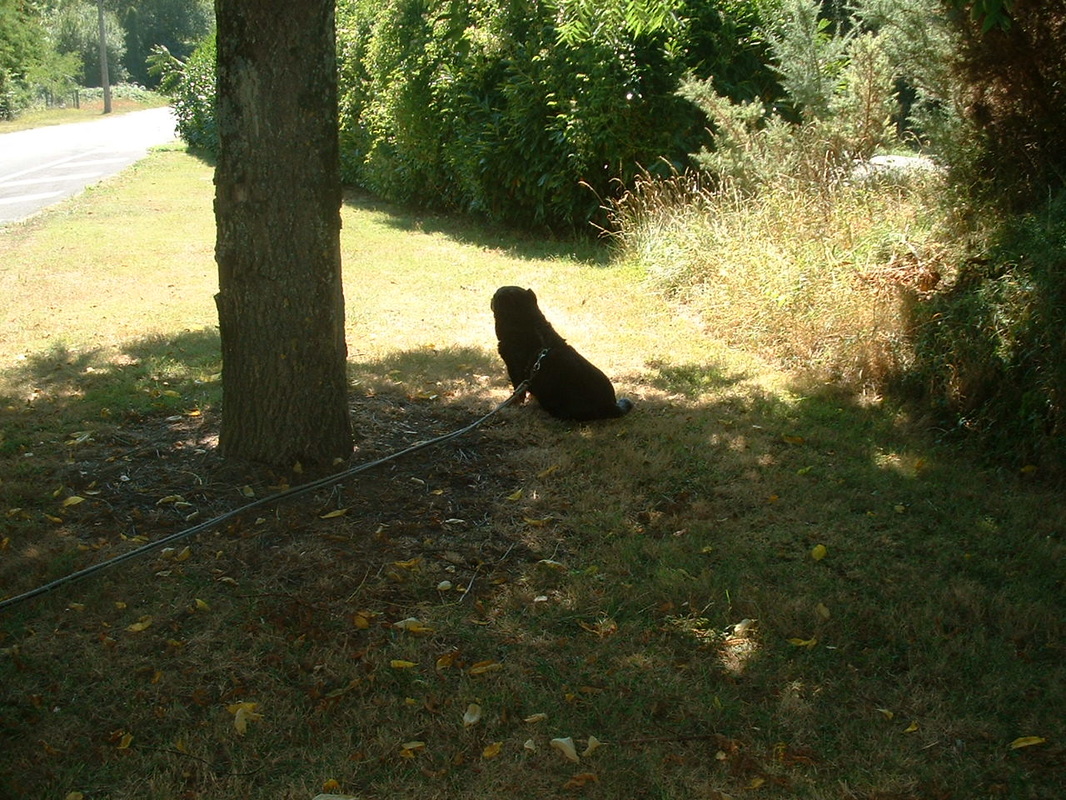 At a rest stop along the way he spent the whole time gazing back down the road towards his old home. 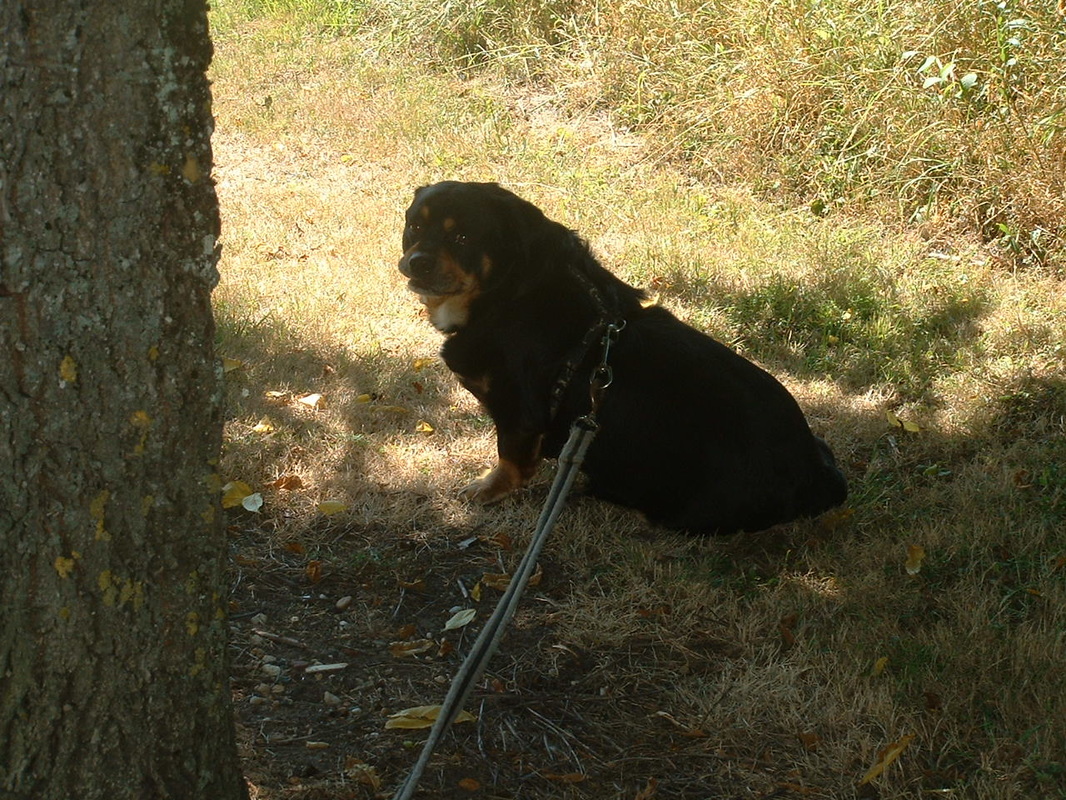 But turned to make sure I wasn't going without him when he heard my packing up preparations.

There is a large car park and, in perfect peace alongside, was some rough ground where we could be sure of a good night's sleep. In spite of the later start we still arrived well before mealtime so had plenty of chance to wander around with Biggles on the 8 metre lunge rein. He was a very quiet little chap and appeared to ignore my presence altogether, but he did get up and follow me around whenever I moved away for a better picture. 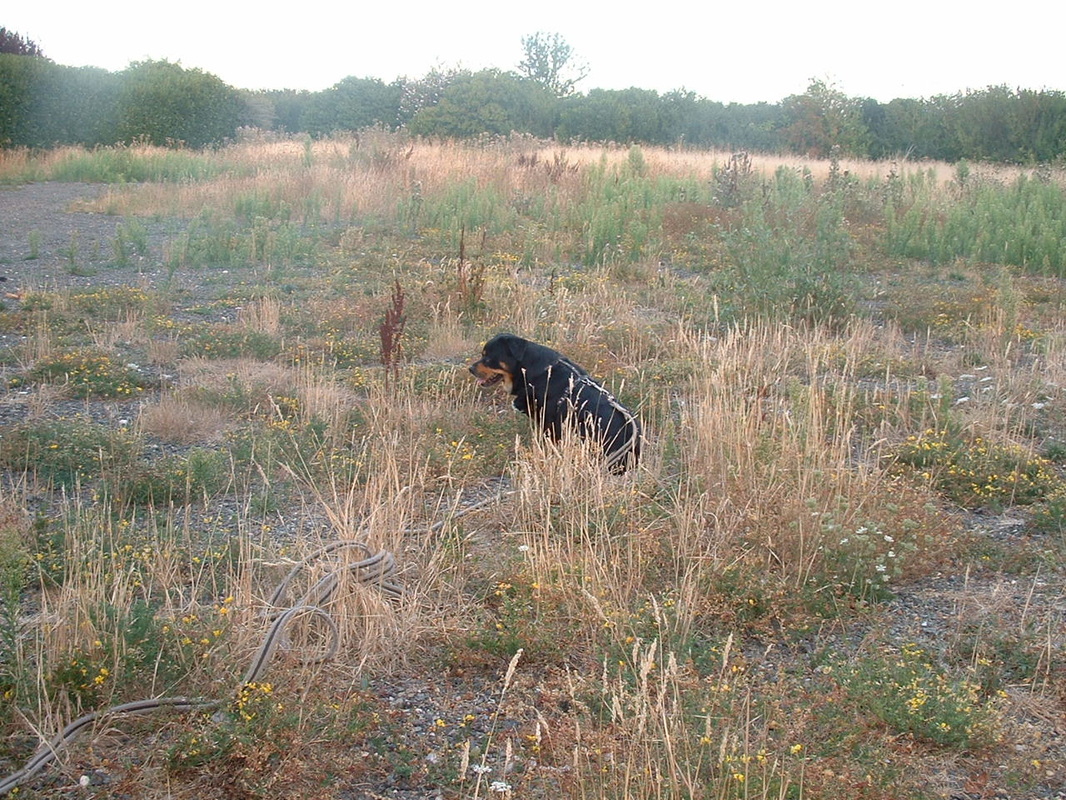 A rare moment before he got up and came back to me. 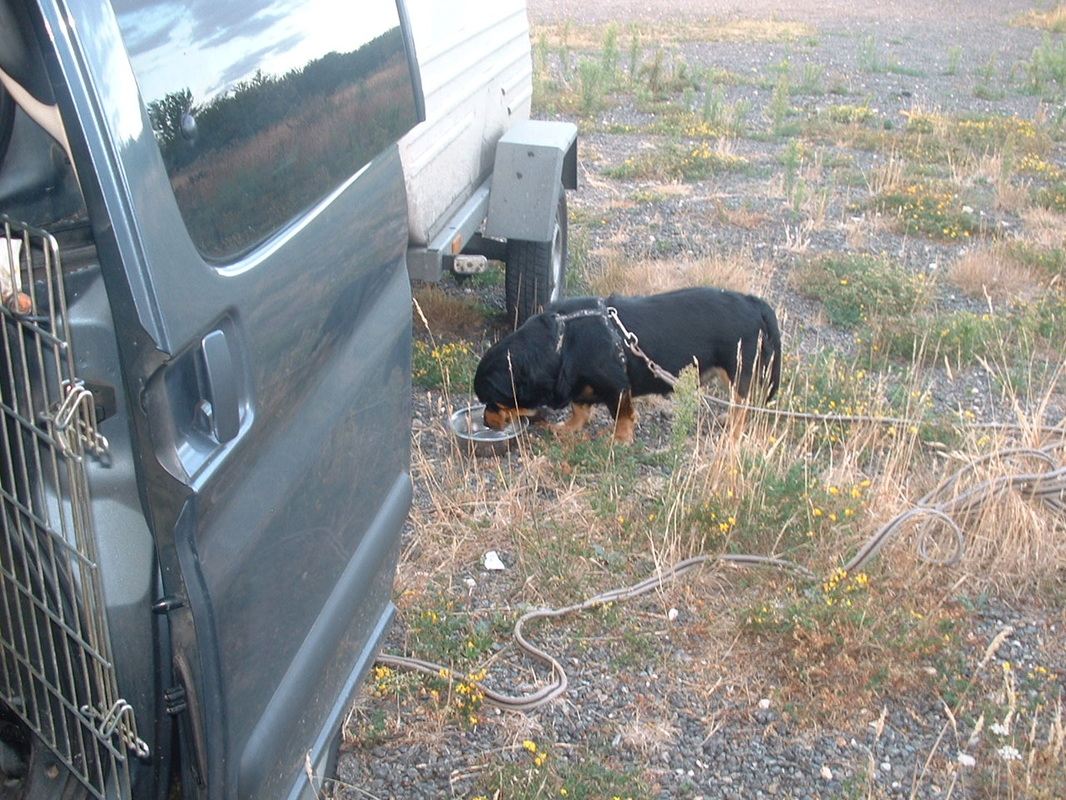 He did have a little water but no more than a bite or two of the croquettes I put out for him. After I returned from the resto we had another little tour before it was time for bed. We both slept soundly in our respective vehicles till the alarm sounded in the morning.

Then it was off to the ferry, a lot of vehicles, this being high season, but we were soon on board and off across the Channel.

Usually my early morning boat gets in to Newhaven at 8.30 am, leaving me a full day's drive before nightfall. This is perfect for a trip to Scotland because I can make it to an excellent transport cafe at Grantshouse, north of the A1 border at Berwick on Tweed. This later crossing though makes that impossible and I was set to try out another cafe I had known in the past, Stibbington Diner near Peterborough, but it was more than 30 years since the last time and I had no idea what it was now like. From information received I did know that, like most other such establishments in England, there was a parking charge even for those who buy a meal inside. This is unknown in France where it is generally recognised that paying customers deserve a free place to spend the night. I do not allow for this in my request for expenses so wondered if I was going to be out of pocket.

I needn't have worried, the parking man on hearing that I was a volunteer and not a company driver who would get total reimbursement, agreed that my stay would be without cost. It can't have done any harm that, while he was considering this, Biggles came up and made a big fuss of him. 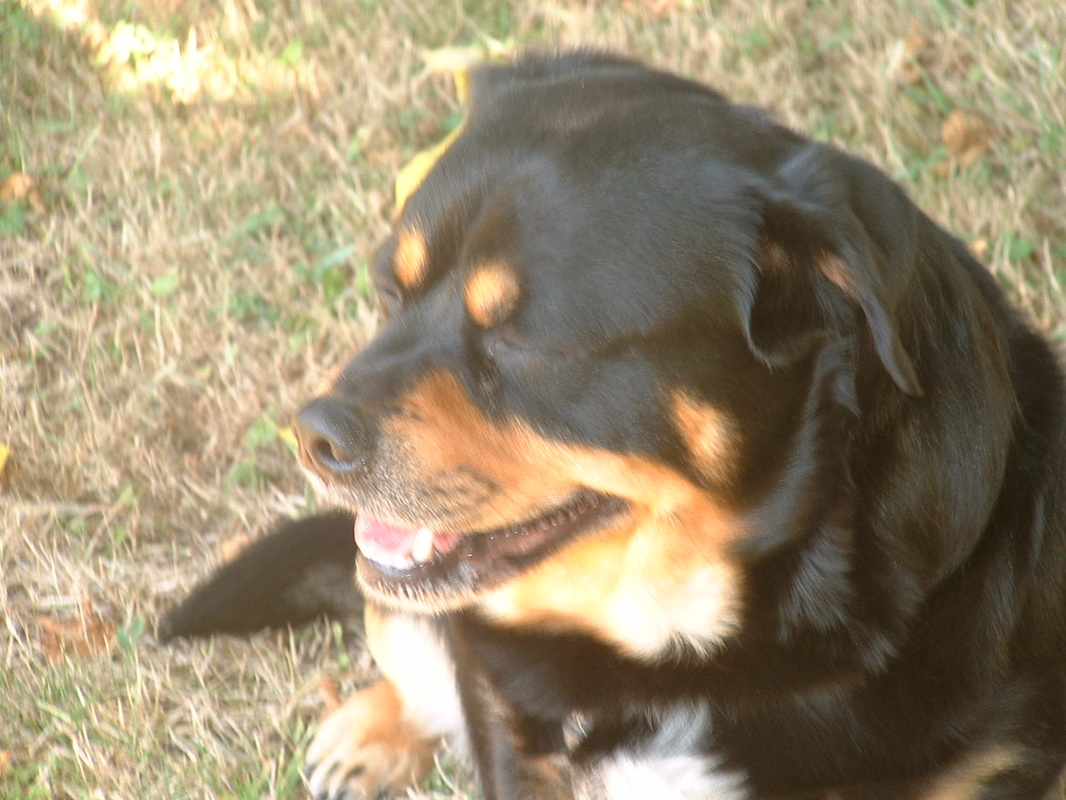 The meal, after our walk around a grassy area nearby, was only a little dearer than in a French resto but lacked nothing at all in quality. I chose the 'roast of the day' which this evening turned out to be roast beef with all the trimmings and followed it up, in spite of the enormous size of that, with treacle sponge and custard. Much as I love French cooking it was nevertheless a real joy to eat traditional English at its best again. I denied myself tea and also the very expensive Australian wine in favour of a large glass of water but did manage to educate the doubting server of my desire for just a small cup of coffee to finish.

After catching up on the TV news Biggles and I had a last walk round before bed, me to read (it was still early) and him to sleep. This we both did soundly till morning.

Next morning, breakfast and ablutions over, we set off at 6 o'clock English time for the 570 kms to Leven. The traffic wasn't bad and, apart from some roadworks our schedule was kept. In fact, bettered, and we arrived at the house of Eleanor and John mid afternoon. Their new house is sparsely furnished, they had only been in a few days and still awaited furniture, so we sat and chatted on fold up chairs while Biggles first explored his new surroundings before settling contentedly nearby. He had calmed down from the rapturous welcome he gave them both as I opened the side door and he had his first sight of them. 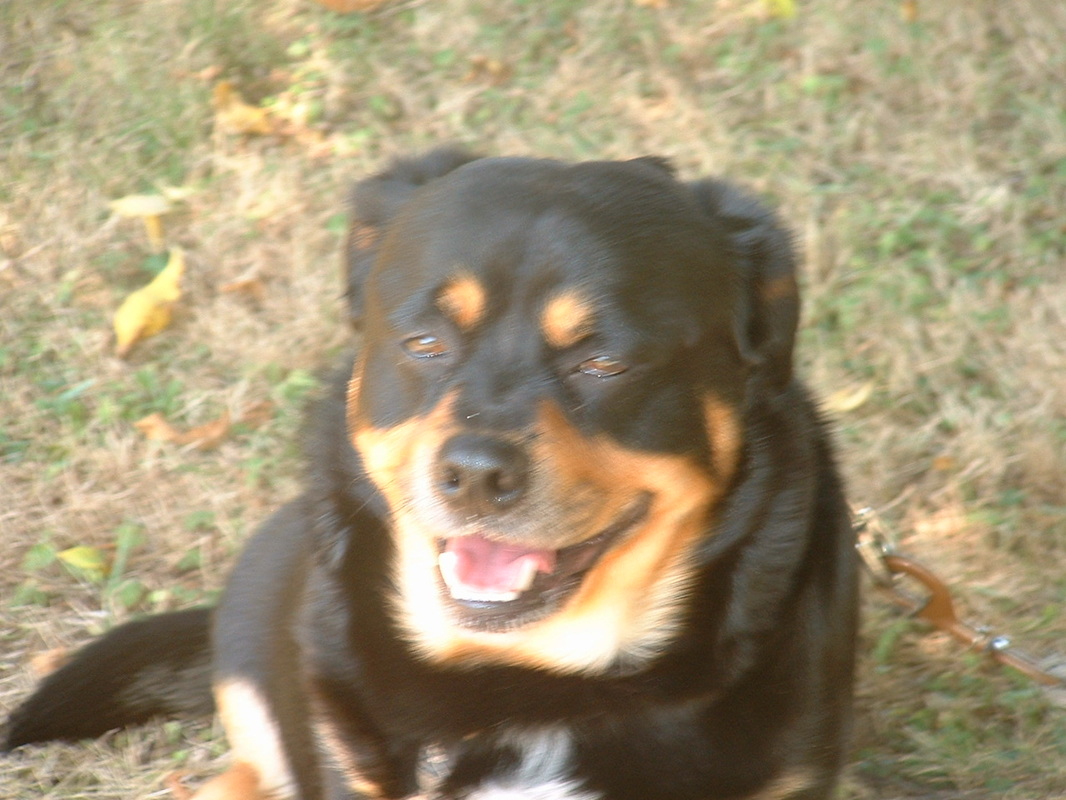 They had offered me a bed for the night but, after accepting a very welcome meal and further chat into the evening, I settled for my own bed in the Teardrop. Not that I doubted their generosity but, as with others I prefer to be in my own surroundings with all my stuff to hand. I know that I would forget at least one item, Kindle, pills or tablet (for my alarm) if I changed my routine. They are early risers so I was let into the house in time for breakfast and, in no hurry bearing my good progress of the previous day, didn't leave till mid morning for a brief visit to Sainsbury's in the town to top up with diesel. Not something you will often hear me say in the UK at their prices, but I would need every drop to get me back to Newhaven and Dieppe.

Stibbington Diner it was for a return visit, recognised by the parking man and again, nothing to pay. I had paid my homage to the Cedar Cafe at Grantshouse for a lunchtime snack of tea (half a giant mug specified) and home made cakes but still arrived in very good time at this overnight stop. This time the roast of the day was off the menu, all apparently eaten before the evening staff came on, so I settled for liver and bacon. A lovely indulgence and this time chose apple pie and custard to follow it. Stuffed! Nobody should think that I don't like French cooking and yearn for the menus of yesteryear in my old homeland, but it is a real pleasure to re-aquaint myself with a different kind of good food. But still the full English is not for me. Tempting as it smells, breakfast was tomatoes on toast. Just the job.

Another easy day was before me. Hailsham, Sussex was my immediate goal and I was due there at 8.30am in order to get the 2nd line electrics between car and Teardrop sorted so that my car battery will keep the caravan one charged up while running in order to power the fridge and other items in the latter. I found the place very easily and, half an hour early, had time to look at all the vans awaiting repair and renovation. It was obvious, because of the number of them in the yard, that they specialise in the American Airstream models and I passed a pleasant half hour looking them over in various stages of repair.

Then to my own repair. A young man, very knowledgable and skilled, connected everything up within an hour and I was soon on my short completion of the journey to Newhaven. He was very interested in my Teardrop, now mounted on a sturdy French chassis after the disaster of the English example of engineering at its worst. He was thinking of building his own small caravan and had already had the idea to use a trailer chassis. 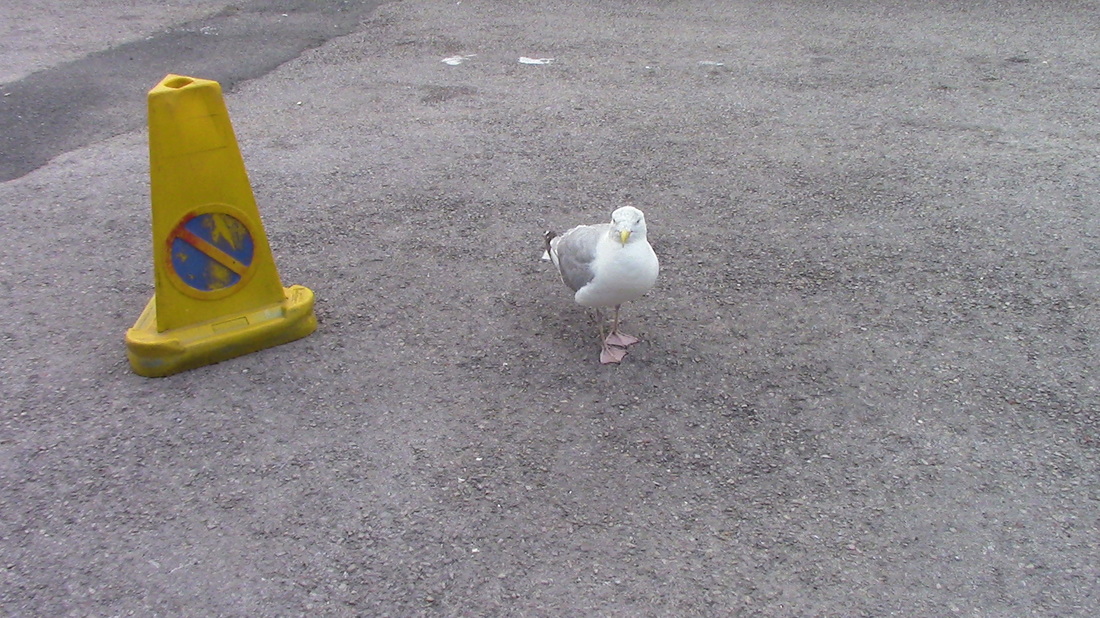 I wasn't the only one waiting at Newhaven. He stood there and watched me for 20 minutes!
So it was that I was in Newhaven before lunchtime. I had originally been booked on the Thursday evening ferry but, because of my need to get the caravan sorted, had tried to transfer to Friday evening. This was full, so now the prospect was to wait until the late night crossing Saturday.
I got a slow puncture repaired at Halford's nearby (for free, as their computer couldn't handle a foreign registration and would thus not accept my money!), did the usual shopping for 'essentials' at Sainsbury's and then parked up in the port. I called at the office to see if there were any cancellations and was told that they could get me on the Friday night boat, a gain of 24 hours. I eagerly accepted and duly pulled into line before joining my friend who runs the small restaurant there and eating the meal which would carry me to the next day. Eating on the boat, snacks apart, is not something I make a habit of.

The crossing was smooth, though without the benefit of live cargo to get me into the first off position, my departure in Dieppe was more tardy than I always experience in the northbound direction. A few hour's sleep in the port, a brief stop for fuel at Auchan and it was the road south for home which I reached at around 7pm. It could have been later, there had been some talk of a couple of dogs from Alencon to travel even further south after the rest of the weekend at home, but that was postponed for several reasons and I wasn't sorry to be making it back after 6 days on the road.