Black was a Dobermann boy who had been languishing in the SPA at Bar le Duc, the capital of the Meuse Departement of Lorraine in north eastern France. He was to be adopted by an Englishman, Jim, who is an experienced Dobie owner and had asked the Dobermanns en Detresse charity, DeD, to find him a needy case. So, all the formalities completed, I was asked to take him across country to a small village near Parthenay.

But first I had another duty to perform, for myself this time, but nevertheless in the interests of the dogs. Over many months of doing this work I had gradually improved and converted the sleeping arrangements in the Berlingo. Firstly a thick foam mattress was cut to fit diagonally across the floor in the space vacated by the folded forward rear seats. A bit inconvenient though and not much space left for a canine companion if we got caught out overnight. Then, I removed a single seat from the car altogether, with the driver’s seat pushed forward and a little foam built up on the floor area; this allowed me to fully stretch out along the left hand side of the car. Much better. It was still a bit cramped though with the folded cages taking up valuable room and restricting the available space for the dogs’ bedding. I wondered if the mattress was thick enough to allow me to sleep on top of the cages, would I feel the sharp grills underneath me? Apparently not, no different to sleeping directly on the floor. So that saved even more room. 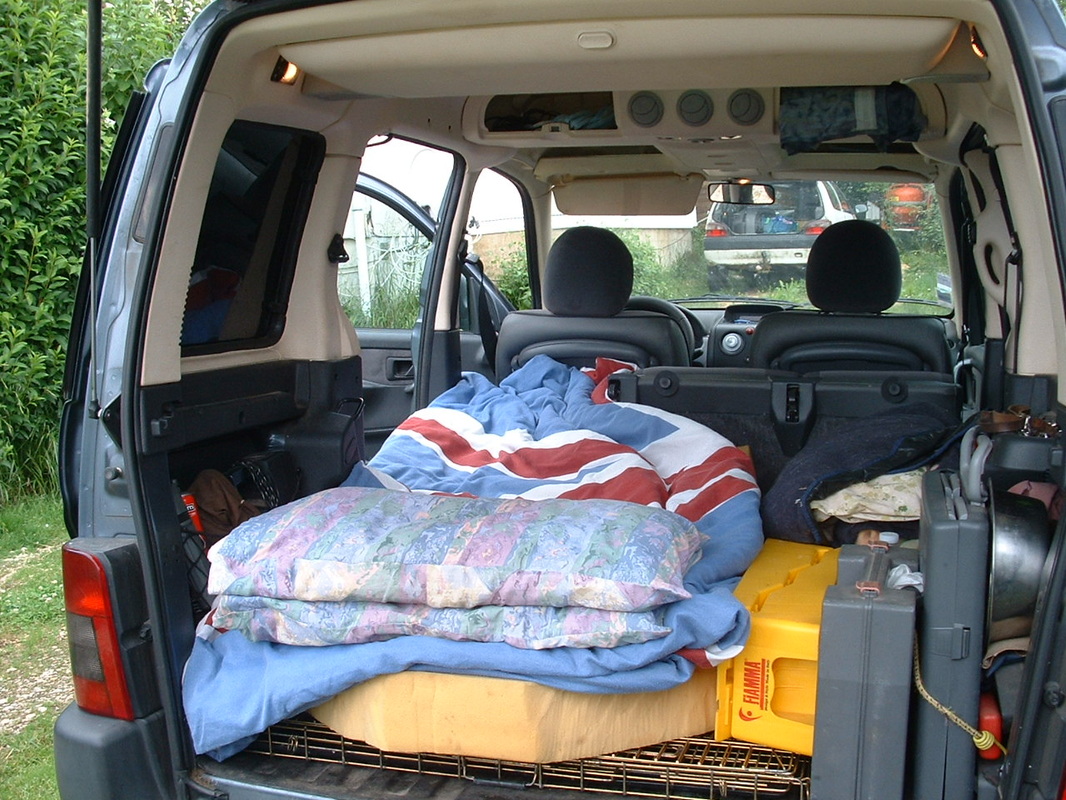 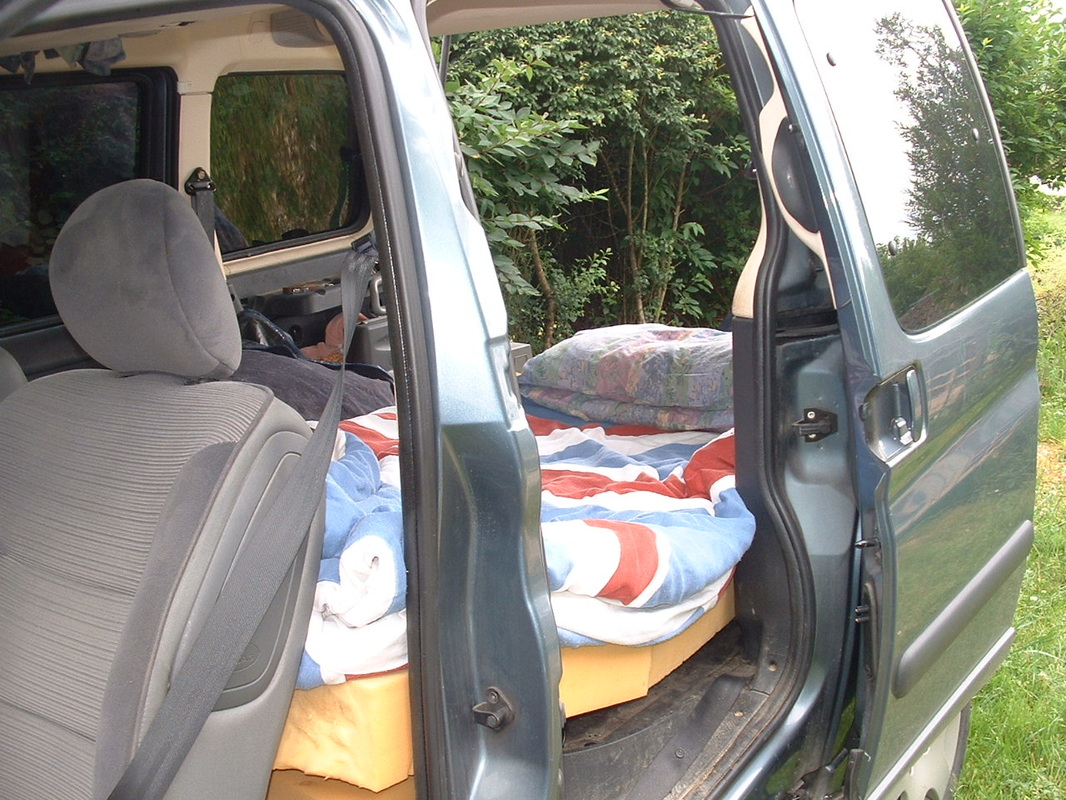 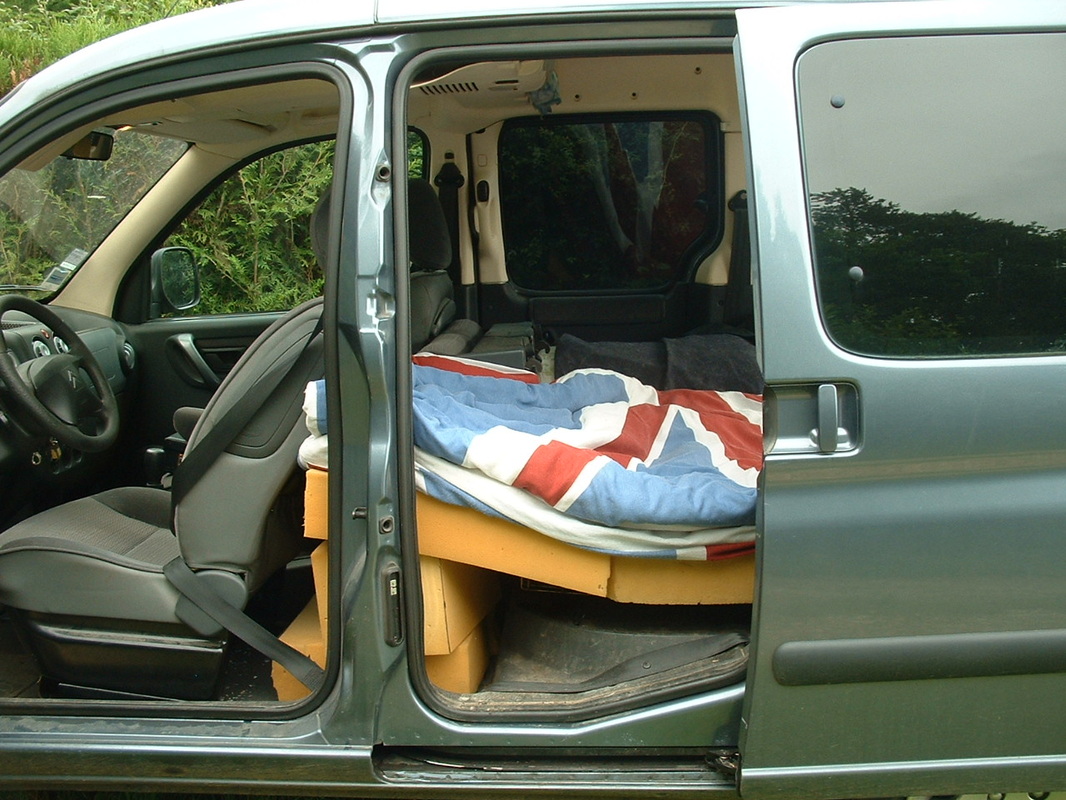 With my king size quilt under and over me I was as warm as toast, indeed even in winter I needed at least one window open a jar. I could even manage the odd dog within too. One large or two small was the rule of thumb. They would sleep, usually quietly, on top of the piled up blankets from the collapsed cages. However, if more than the specified number/size travelled, and if the journey was too long to complete in one day, or if it really couldn’t be arranged for an early morning collection – problem. I had always managed to avoid the extra cost of a hotel but with the advent of multiple dog movements from the desperate situation in Spain a different solution had to be found. Fortunately, most of them came in over the south western border at Irun, and, as most were destined for northern France or beyond, a late-in-the-day collection could be overcome by an overnight stop at chez nous in the Dordogne. We have large and comfortable cages there, donated by helpful well wishers, not always needed but there if need be. For instance after our old foster Springer Spaniel, Sami, arrived from Carcassonne. Despite his size and venerable 12 years he hates other males in ‘his’ domain and will attack on sight, so a delicate juggling act has to be performed for each duration. 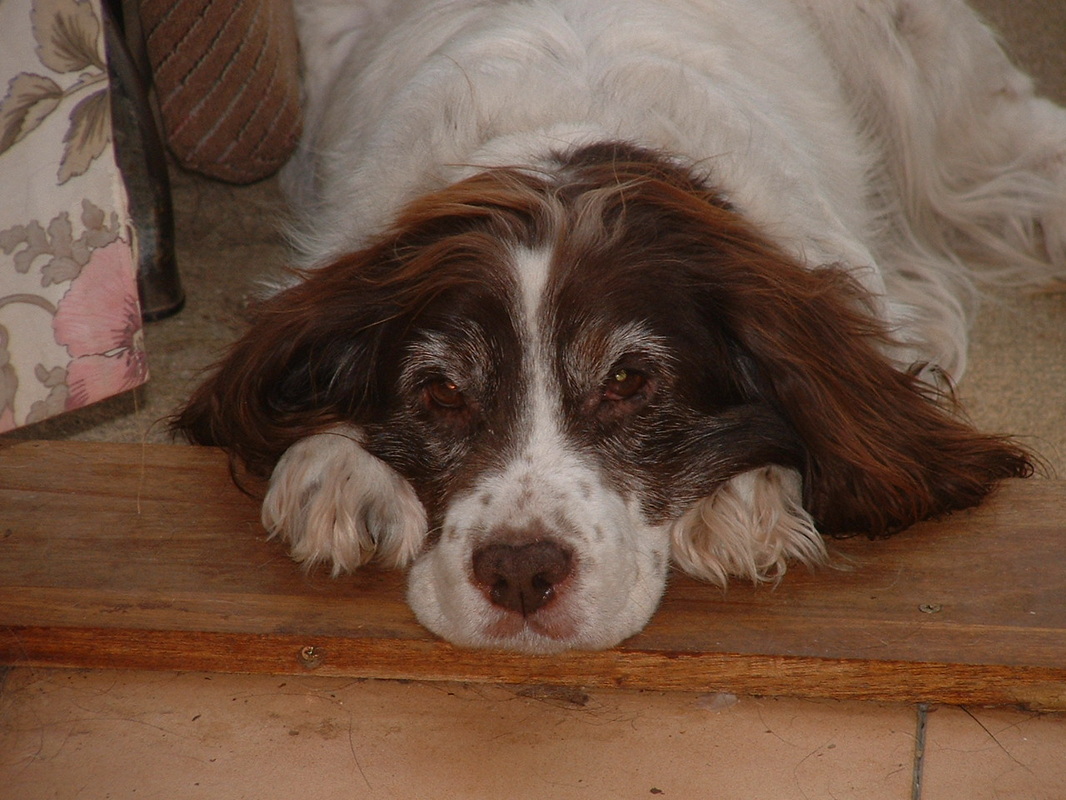 Sami. Butter wouldn't melt in the greying chops of this old chap, but beware, this is a Wolf, in a Spaniel's cuddly fur. If you are a male dog that is, he loves the ladies. 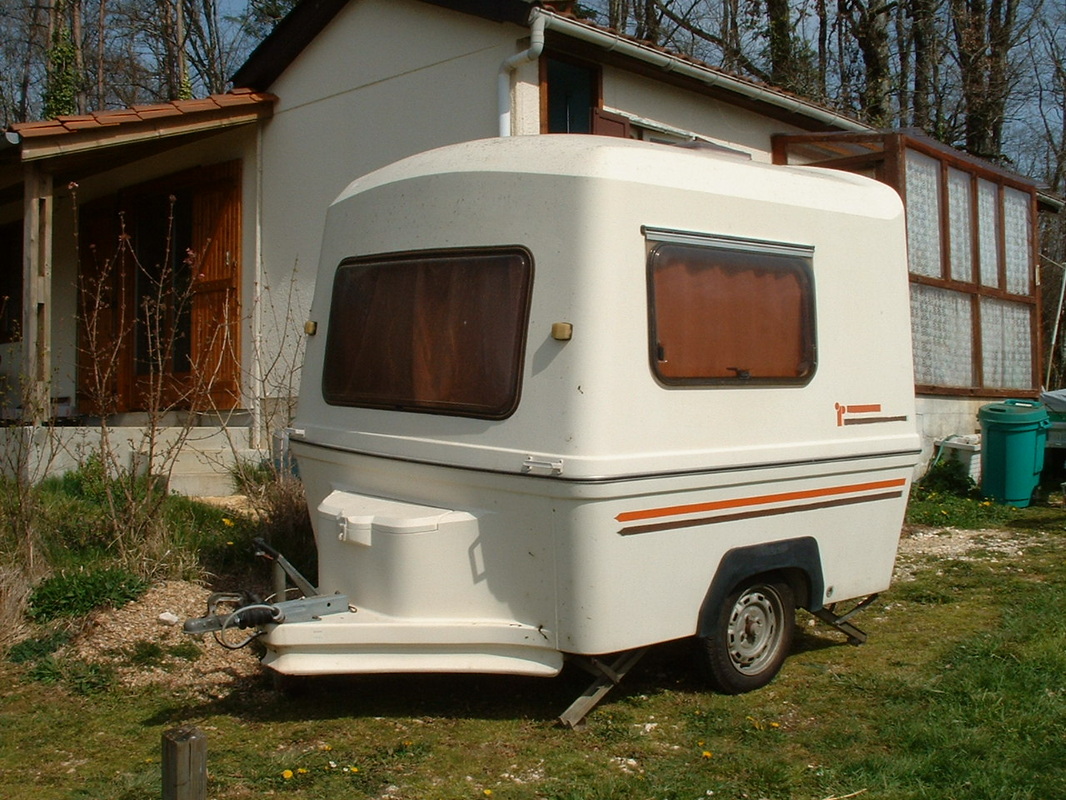 An old girl this time, born in 1985 and still going strong. Very light but, unfortunately, rather too high a profile for economy's sake.
When I first started I used to tow our small caravan with me if a certain night out was in prospect but the extra cost in fuel was too great to bear, hence the bed in the car. Then I had a renewed interest in a teadrop caravan that I had previously seen and was now reminded of. The weight of these is minimal and the aerodynamics so good that I decided that one would be a useful investment. All I wanted was a bed on wheels, fancy cooking and washing arrangements I did not need, I can get all those facilities at my routier stops. So I went for the cheapest. The Sleeper, from AVInnovate Ltd., and their Teardrop UK subsidiary at Leicester. The order was made, the delivery date was nigh so one day in April I set off for Dieppe. 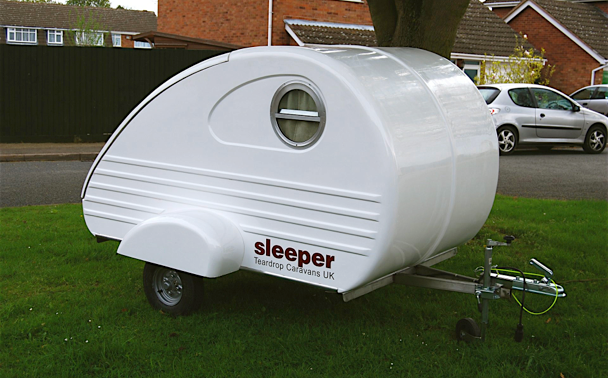 This youngster, born 2013, on the other hand is light and slippery. Actually increased the economy of the Berlingo. But a nasty shock was in store. 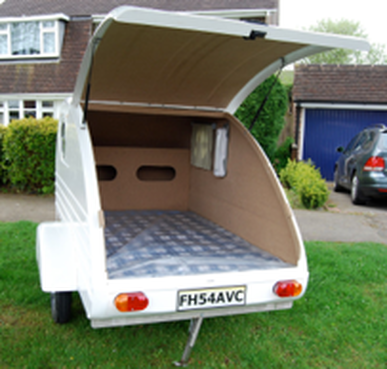 Everything I wanted, a bit of storage, and a very comfy bed. 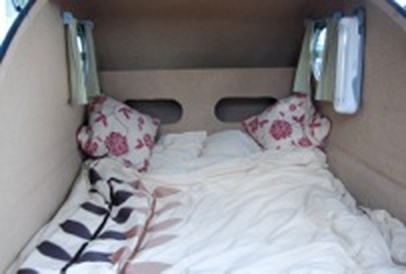 At the factory it wasn’t quite ready, a mix up over word-of-mouth arrangements, but a couple of hours later hooked up and electrics checked I was on my way. Returning via Dover this time for my rendezvous with Black in Bar le Duc I managed to reach a Carrefour some way into France from my previous fill-up at Rouen. I was amazed and pleased to discover no penalty for pulling the teardrop. Then to Bar, nearly 400 kms away.

There was no convenient routier near to destination so it was one of those rare occasions when I have to find the nearest supermarket. Parked up at Intermarché I settled down to eat my paté, cheese, baguette and fruit in the car, with the obligatory bottle of rouge of course. Even with the necessity of buying some plastic cups and plates the whole bill still came to less than a full blown resto meal. I set the alarm and settled to sleep. I had done a short recce before settling down to try and pinpoint the refuge but the road had a dreaded ‘route barrée’ sign on it, so I allowed extra time in the morning to get there.

The next morning, after a quick refuel at the pumps I tried to see if I could find my destination. Dutifully following the deviation sign I climbed through a residential area and dropped down to the other end of the blocked road, nothing. I ignored for the moment the road which was the address given, it was only 200 metres long and was plainly only houses, and returned to the start of the diversion. This time I ignored the sign and ploughed on through till I got a direction from a local resident. ‘En haut’ he said indicating ahead to where the road split. I chose the right fork because it climbed up a hill, en haut; I thought. The climb got steeper, the road got narrower, the track tarmacless. Then another fork, both en haut, I chose the left. Wrong, 100 metres further on I was in a field. Carefully reversing the caravan I descended to the fork and tried the right hand cart track. Another field. So much for en haut.

Back to the town I then went up the street I mentioned before, the one which is the official address. It too became a track but I ploughed on till I met a lady with 2 Rottweilers, while they tried to lick me to death through the open window she gave me directions to the SPA. It wasn’t in this commune at all, it was over the boundary in the next one, along the main road in the direction that I would shortly travel anyway. I found it easily now, choosing to follow her left waving hand rather than the insistent instruction ‘à droite’. How many people can there be who don’t know their right from left, either a hell of a lot or I’ve met most of them.

If you are wondering why I chose to persist along no less than 3 different cart tracks I should explain for those who don’t know, people don’t like to live next door to dozens of barking dogs and consequently many refuges are banished into the wilds. 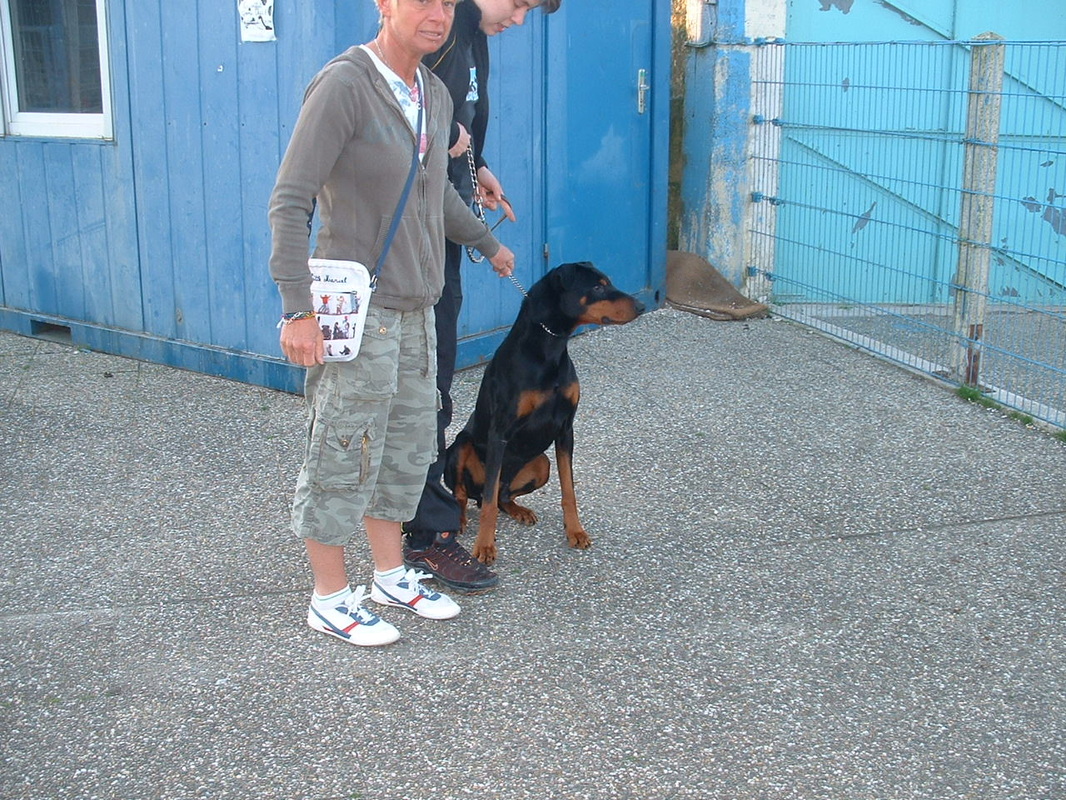 Two early morning cleaners and, at last, Black, our boy for the west. 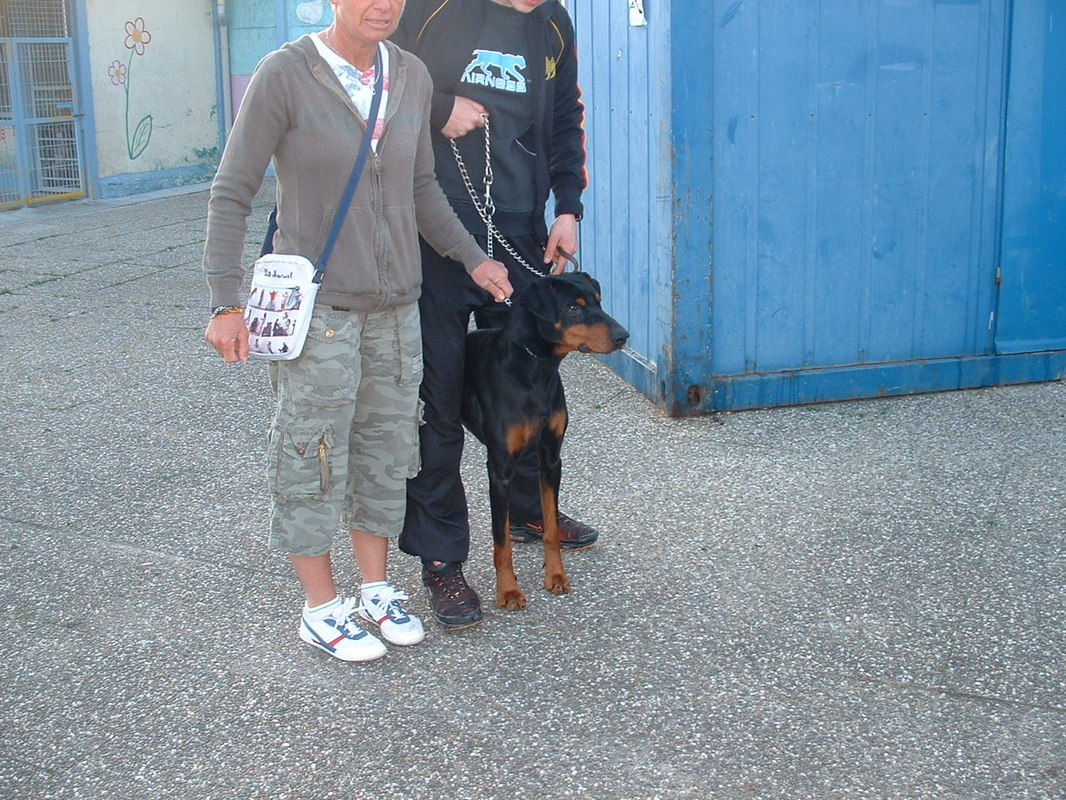 Once on site I had only a short time to wait before the cleaners arrived, a quick phone call to the Directrice, a short search for the paperwork and Black was produced from his kennel. They warned me to be careful, he would be off like a shot at the least opportunity but they needn’t have worried, I haven’t lost a dog yet and I had no intention of breaking that record. After a brief walk round and a couple of pees he willingly jumped into the back of the car and into the open cage prepared for him. I wanted to anchor him to the double chain at the rear but the lady insisted, no, it had to be the one further forward. I’m the boss but I’m not bossy so I demurred. A kilometre later, as I suspected; his head appeared on my shoulder: The chain was transferred to the rear. He now had plenty of freedom of movement but couldn’t get too pally. I hadn’t had my kick start morning coffee yet so an hour or so down the road we stopped at the routier where I would have overnighted had I come directly from home. Time for a livener for me and a wash and brush up, and a walk round the empty park on the lunge for Black. Then off again eastward bound. My route was to take me through 3 cities if I was to avoid autoroutes, Orleans, Blois and Tours, which I was not looking forward to but the cost was even less attractive. Nevertheless I soon discovered that I had on board one of those passengers who is fine and relaxed with the steady hum of tyres on tarmac and the gentle rhythm of the road, but who hates holdups of any kind and in particular, start, stop traffic. I could stand his whining and leaping about no longer and dived onto the dreaded péage. As a result I was 30 or 40 euros poorer but rolled up at our destination about an hour ahead of time. 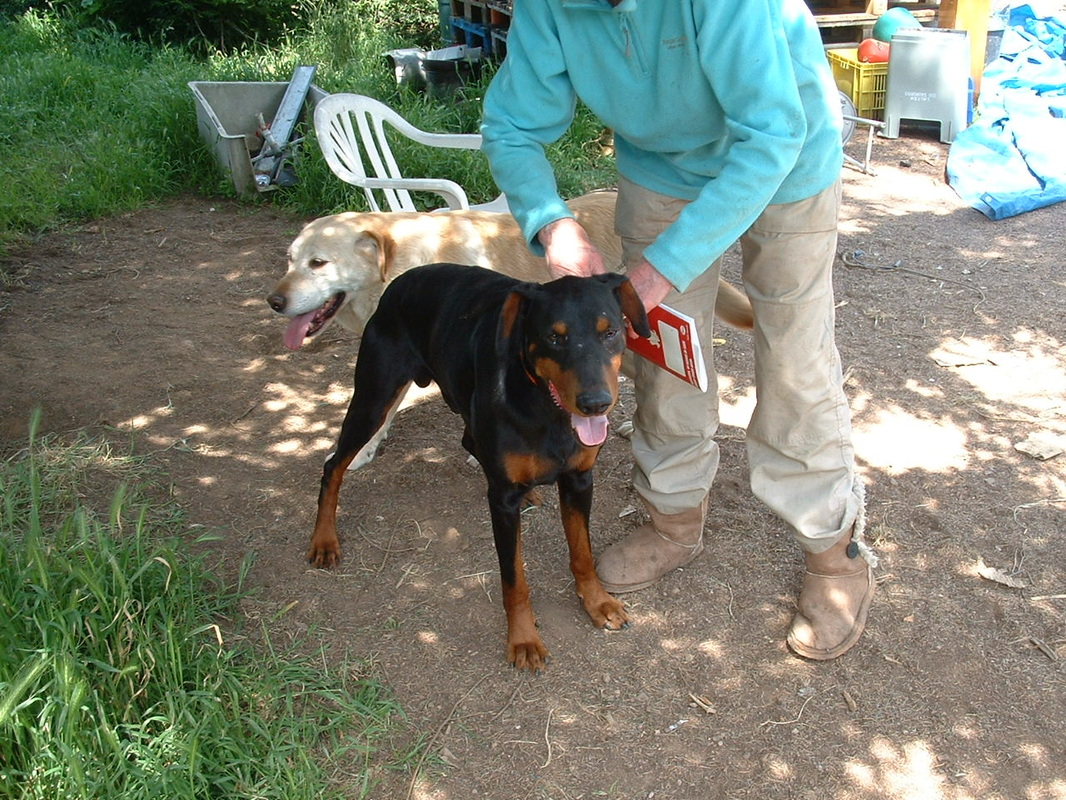 Meeting the gang at Jim's 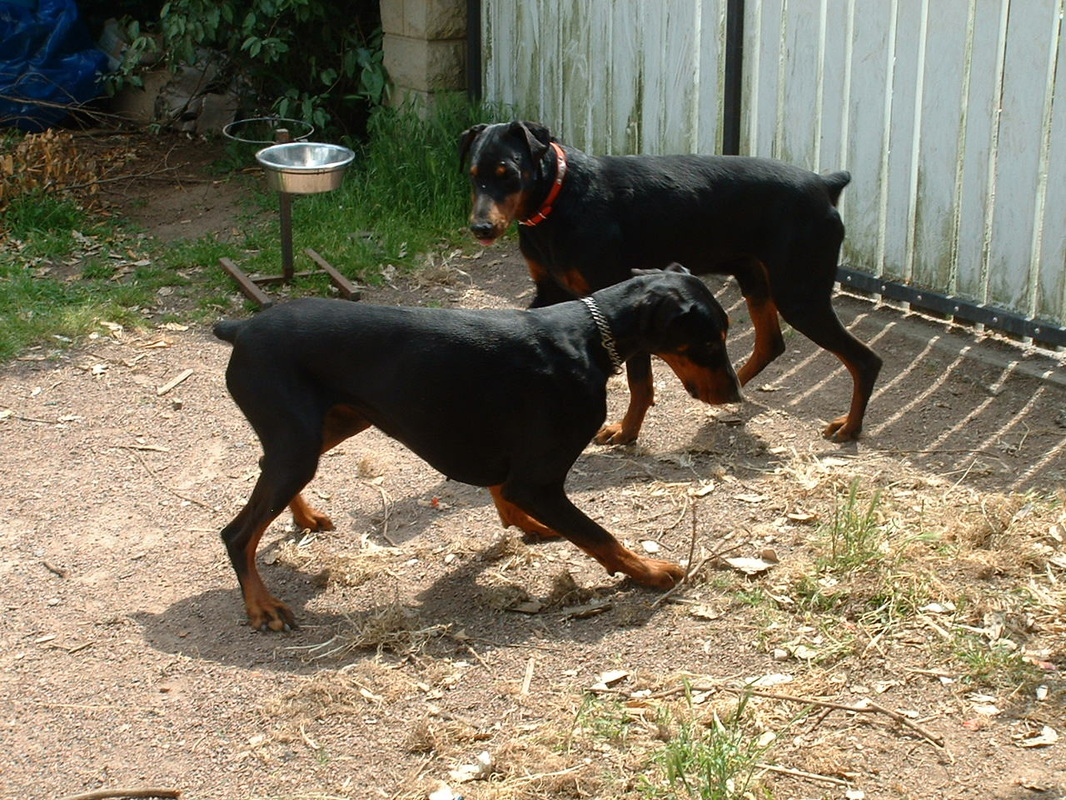 This was a later encounter, the lovely Guiness I brought from Laval. She loved to play with her new boyfriend..............
Jim and his gang were waiting at the gate and Black was soon off the lead and making new acquaintances. All went well at first but then a slight misunderstanding, a quick tempered snap or an unwanted and over reacted look and all hell broke loose. All on to one, the pack defence, but over as quick as it started with Jim and me, and Jim’s wife diving into the fray to separate them. Then back to happy coexistence. Not unusual, some people are like that too you know. 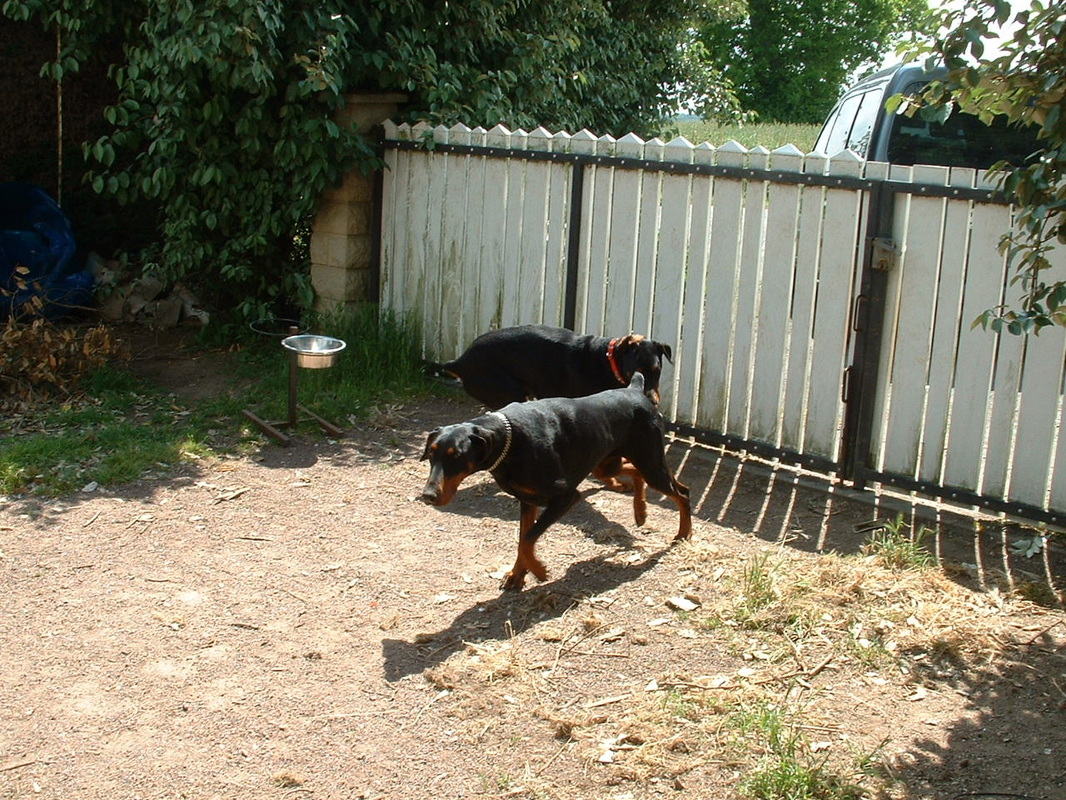 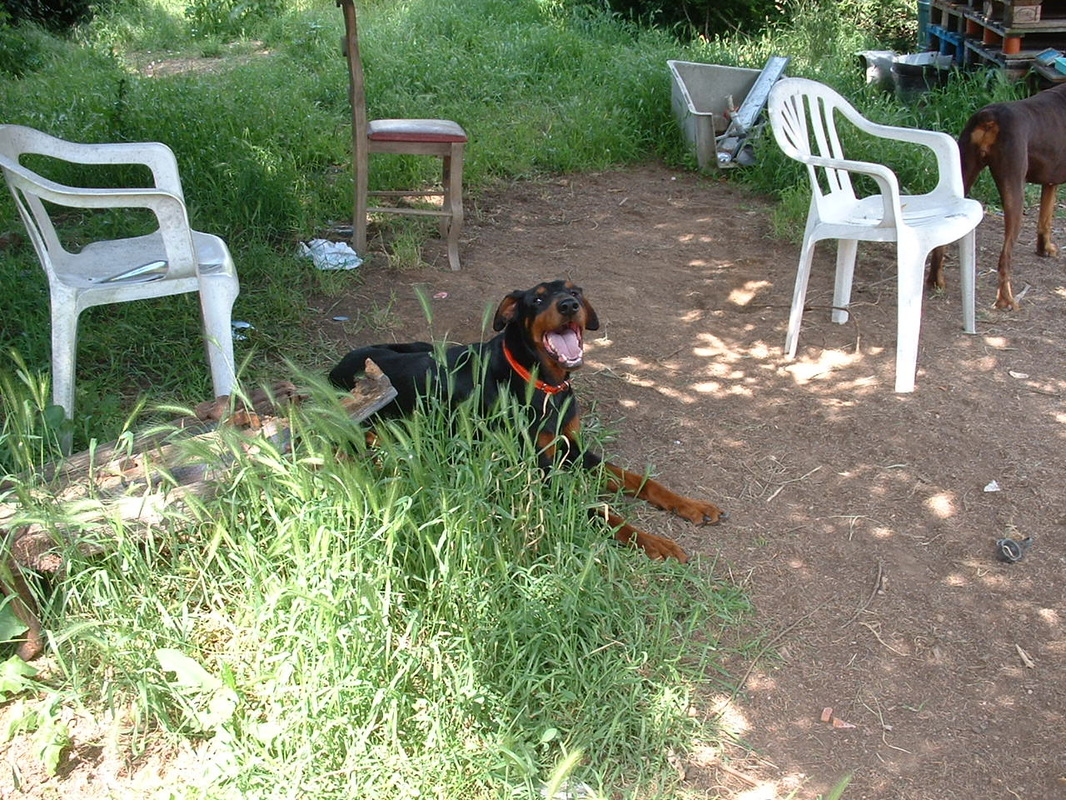 .........and was ordered to chill out for a while. He obeyed, but showed his disapproval.
I took my leave, first stop a quick email update at McDo’s in Poitiers then to Vivonne, the large routiers on the hill to the south of the city. A couple of kirs, a great meal, equal company and so to bed. Home before nine in the morning.

Black is now Duke, they're all black aren't they, Dobies? Well, those that aren't marron, obviously.