Way back in May 2011 I told the story, in another place, of  Blume and Tyson.

This is the sad story of Blume and Tyson

Two Dobermanns who had come to the attention of PAD the Dobie rescue organisation because a French volunteer in a refuge near to Cadiz in Spain had noticed the distressed condition of one of them, Blume.

She sent a video of an emaciated and unsteady Blume which was so horrific that most of us had seen enough before it was over. It was decided to raise the money to bring him to France and this was done. While this was going on it was revealed that there was a 2nd Dobie there, Tyson, who was in much better condition and it was decided to bring him along too.

The organisation of such a trip was complicated , the trip of around 2,000 kilometres to their new foster home in Chartres  would be too much for poor Blume so a way had to be found to bring them both to willing temporary fosterers at Toulouse. This problem was solved by the cooperation of Levriers en Detresse who regularly rescue Spanish Greyhounds and bring them to France in small vans with specially constructed individual kennels. They would have space for 2 more on one of their missions.

The transporter was met at the border by 2 PAD members who completed the journey to Toulouse where the 2 of them could relax in comfortable and sympathetic surroundings for a week or so.

My job was to collect them from there and take them to Artenay, between Orleans and Chartres where I met their new carers for the final leg.

In order to make the 580 odd kilometres in one hop I needed to be as near to the pickup point as possible to spend the night before so, I set off in the late afternoon for the 4 hour journey to Montauban.

I was early at the rendezvous with Michelle and Joseph and they were early too so we had a head start from the off. Before leaving though we gave them a brief walk round and, despite the evidence of the original video, I was unprepared for the parlous state of Blume’s health. He had to be lifted from and into the cars and could barely stand unaided in between. His ribs showed like a Greyhound and his prominent hip bones reminded me of the final days of my late Lurcher, Lurch. He apparently had a good appetite and had been well cared for during his week at Toulouse so there was obviously something more serious to be attended to on his arrival at Chartres . 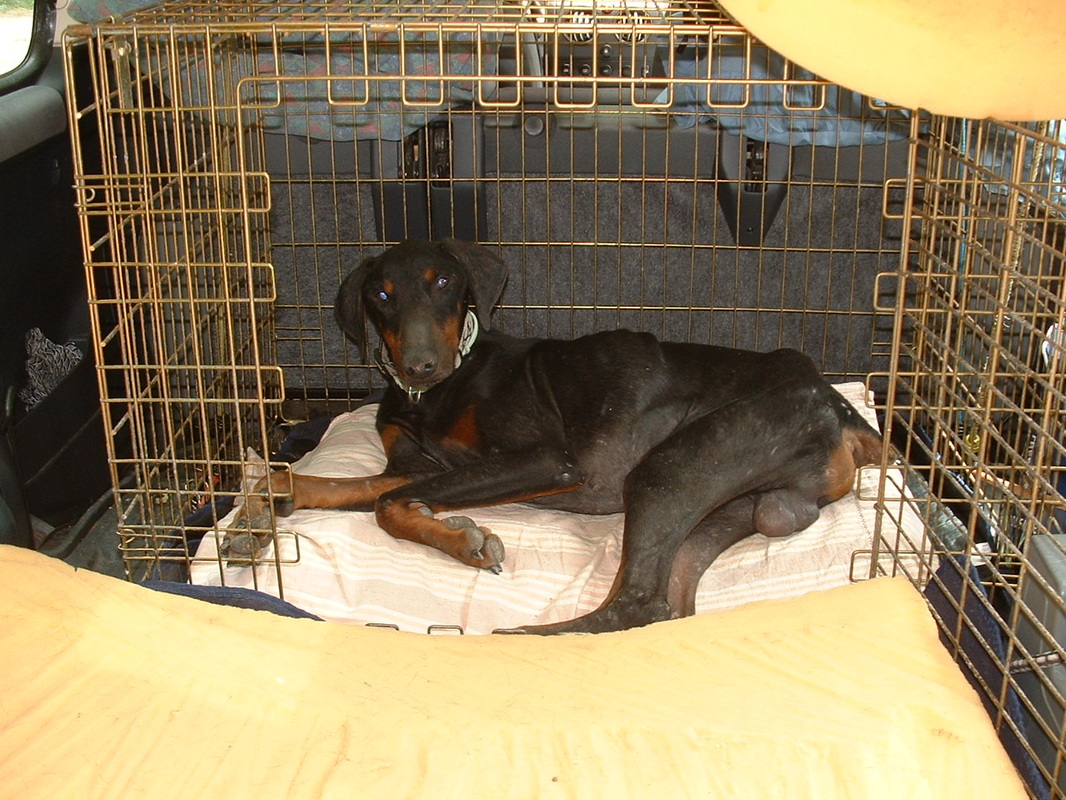 Blume, loaded, and in the position that he would adopt for the whole journey 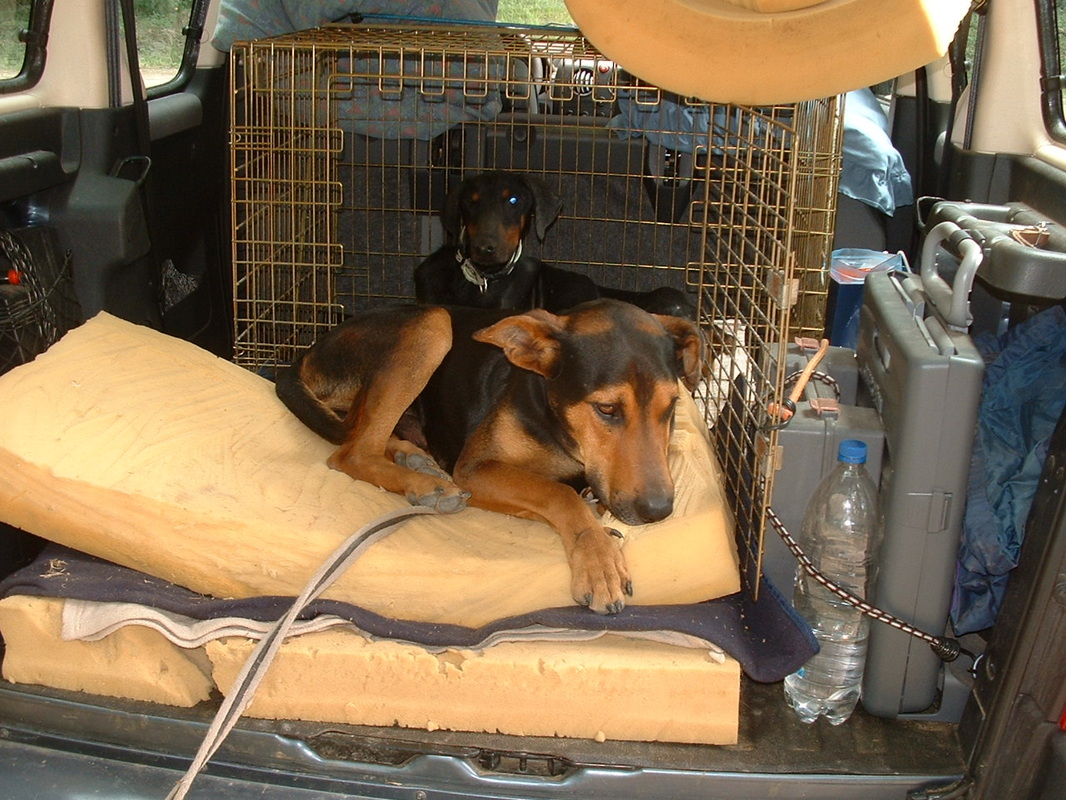 Tyson was next on board.......
I made very good time, straight up through the middle of the country but on our stops only the robust Tyson could be persuaded out onto the grass. Blume presented me with one solid crotte in the cage which was easily removed and took a little water, but nothing would move him from his prone position on the whole journey. 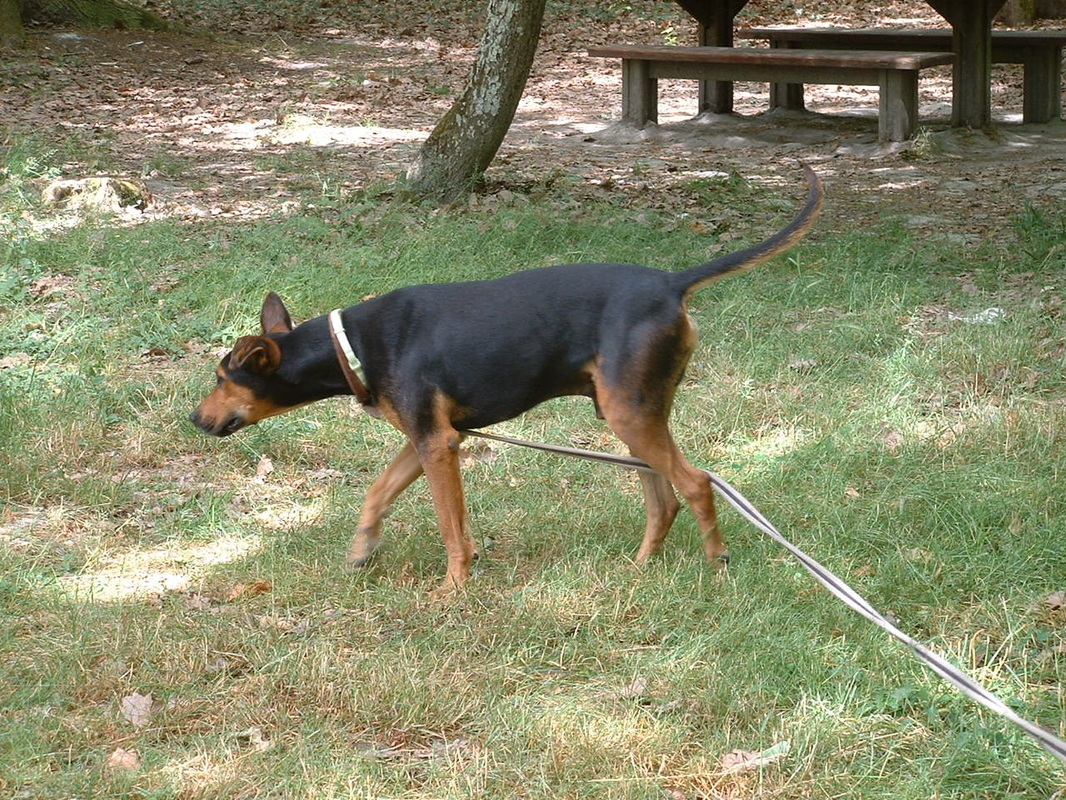 .......and walked alone at each stop
At Artenay I was met by Hélène and Guy who were as worried as I by his appearance. With some difficulty Guy and I removed lifted him from the cage, taking great care not to snag his legs in the bars. He did stand when lowered gently to the ground but was very wobbly on his legs, his rear end was especially weak.
After some photos for which he gamely sat upright he was lifted onto soft blankets for the final half hour or so to his new home. 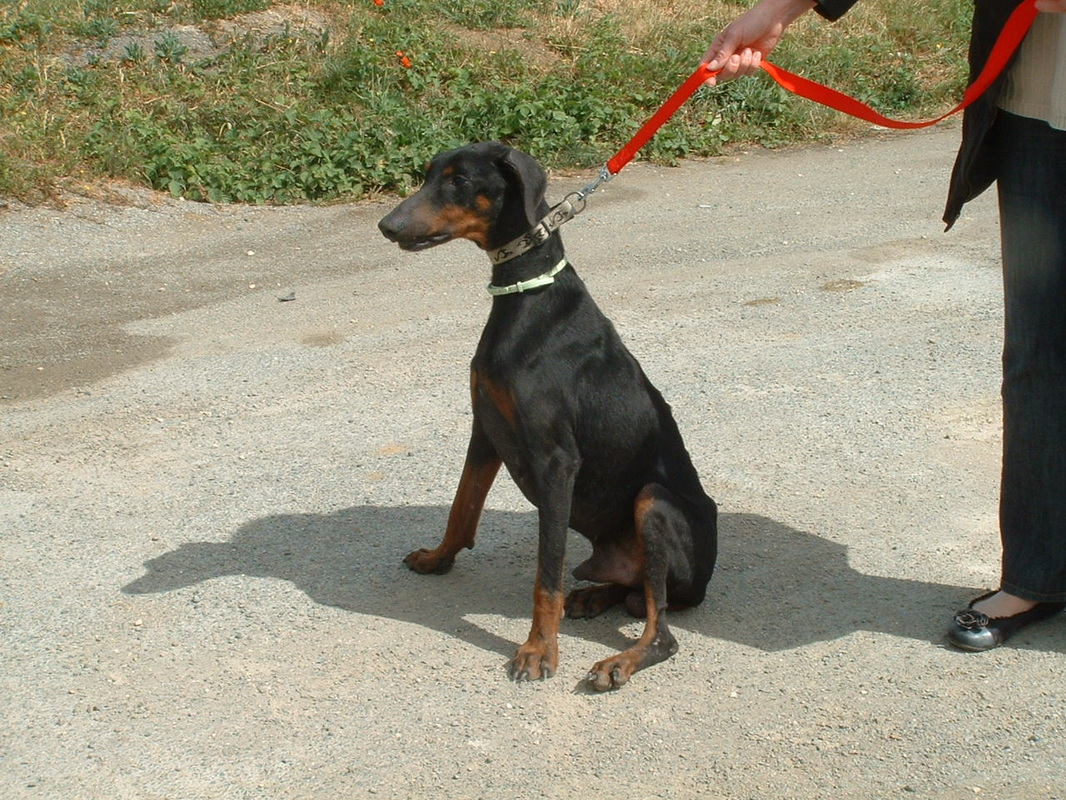 A big effort for Blume, but he couldn't hold the pose for long 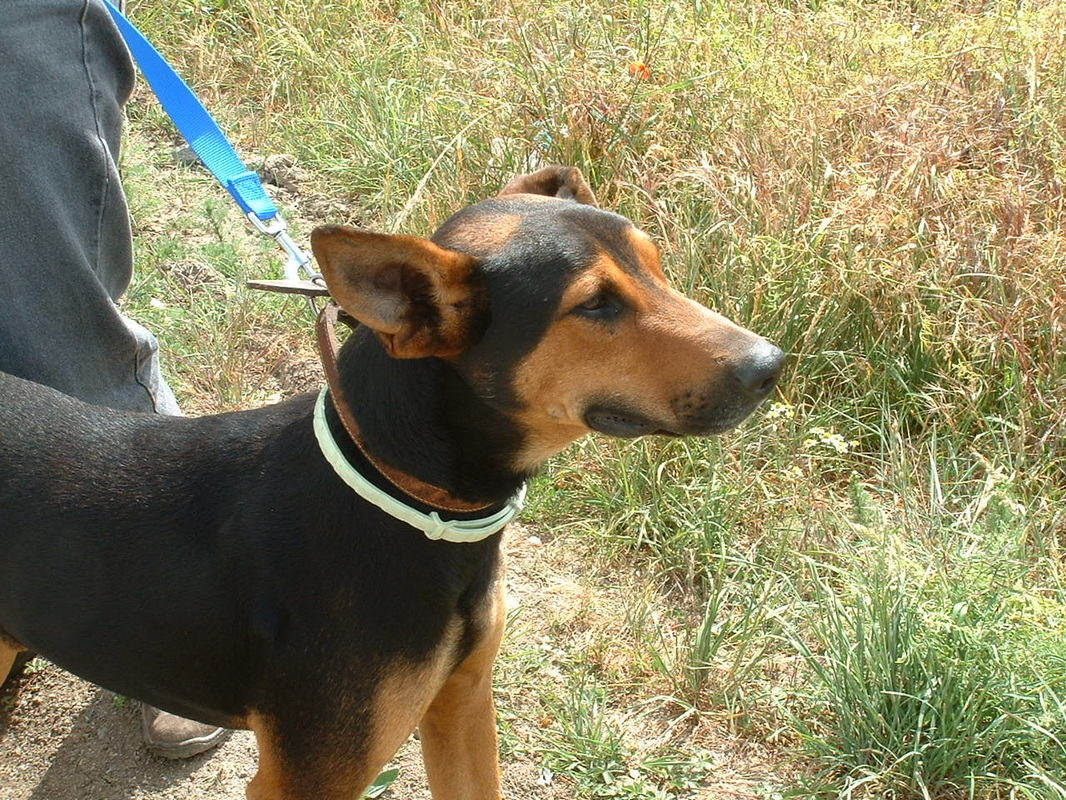 Tyson, eagerly searching new horizons
My job was done and I headed for home overnighting near to Limoges before heading straight for Hautefort where my own dog Ramona was supposedly waiting for me, but there was a shock to come on that score when I discovered that she had lost patience and taken herself off in search of me. That story is told elsewhere.

This tale does not entirely have a happy ending for, after enduring the wicked cruelty that landed him behind bars at Cadiz, a gruelling journey across half of western Europe, and many visits to the vet over the following week, Blume had to be finally put to rest. In addition to leishmania, which could have been treated,  he also had the wobbler,  a degenerative and incurable disease which well described the appalling weakness of his hindquarters. You can imagine the immense sadness that this news cast over all who had had a hand in his bid for safety, both supporters and those who met him along his way. The helper in Cadiz, the 2 couples involved in his collection and care to Toulouse and the couple in Chartres who tried tirelessly to find a better outcome for him. Least of all, because I knew him only for a few hours, I also was affected by this sense of loss.

The good bit. Tyson is fit and well and thriving in Chartres and is available for adoption, but PAD take their responsabilities very seriously and we can be sure that he will only move on when they are assured it is the right thing for him.

The update, after 2 and a half years, of Tyson’s story.

He had moved a little, for family reasons, from the city of Chartres to the small town of Chateauneuf en Thymerais, about 30 kms to the north west, and now, after one false start along the way, was at last to meet his new family.

Arranging a rendezvous in the central market place for 9am I travelled the afternoon before up to the village of Moisy. This is midway between Blois and Chateaudun and, just before it is the excellent routier of La Table Beauceronne with which I have had pleasant association since first discovering it on a detour with another dog some years ago. It is a modern building, set amidst a very large parking area for both heavy and light vehicles.

Timing my arrival perfectly I parked up just before 7pm and, after transferring what I would need for the night and morning to the Teardrop, strolled into the bar for the first kir. The chat was of dogs, the barmaid had an Alsatian/Malinois cross and, as she recognised me and remembered what I do these days, turned naturally to my forthcoming re-acquaintance with a similar friend the next day.

Dinner, as always was perfect, only 2 choices and, as regular readers may know I like it when the chef can concentrate all his, or her, attention in one direction. This was no exception, coq au vin or haché parmentier (cottage/shepherd’s pie). Now parmentiers in France have not always come up to standard in my opinion, too little meat and too much potato, but I thought I would risk it this time. Only last week I had gratefully received a home made example at the house of an adopter and was pleased to eat it indeed as I was far too late for the local routier, but she too had let the potato scoop slip when preparing it. This time, as I say, I decided against the coq, it was served with mushed carrot which, on the plate of a mate nearby looked more like Swede than carrot, and I saw that the parmentier came with salad, which means lettuce and, if I am any judge, in France that means properly tossed with spiced vinaigrette. And so it was, perfectly proportioned and dressed with a crusty cheese topping. Even in my eagerness burning my tongue on the latter could not spoil my enjoyment.

The cheese and sweet to follow with the little coffee at the bar ended a perfect evening and I retired to bed in the comfort of my little igloo highly satisfied to read before sleep.

One and a half hours for the 90 kms to Chateauneuf and I made good time finding the, rather smaller than expected parking area at 8am. In a stub end side street there were a few early stall holders setting up and I found myself a corner to park and wait. A text to Guy to announce my presence and his reply told me that his mother would bring Tyson to me in 15 minutes. Soon Tyson and I met again, he is a little rounder than before I thought, but wondered if it was maybe his Dobermann body behind the fine Ally head that fooled me. A nice gentle dog nevertheless and a Dobie with a tail – always a bonus for me! 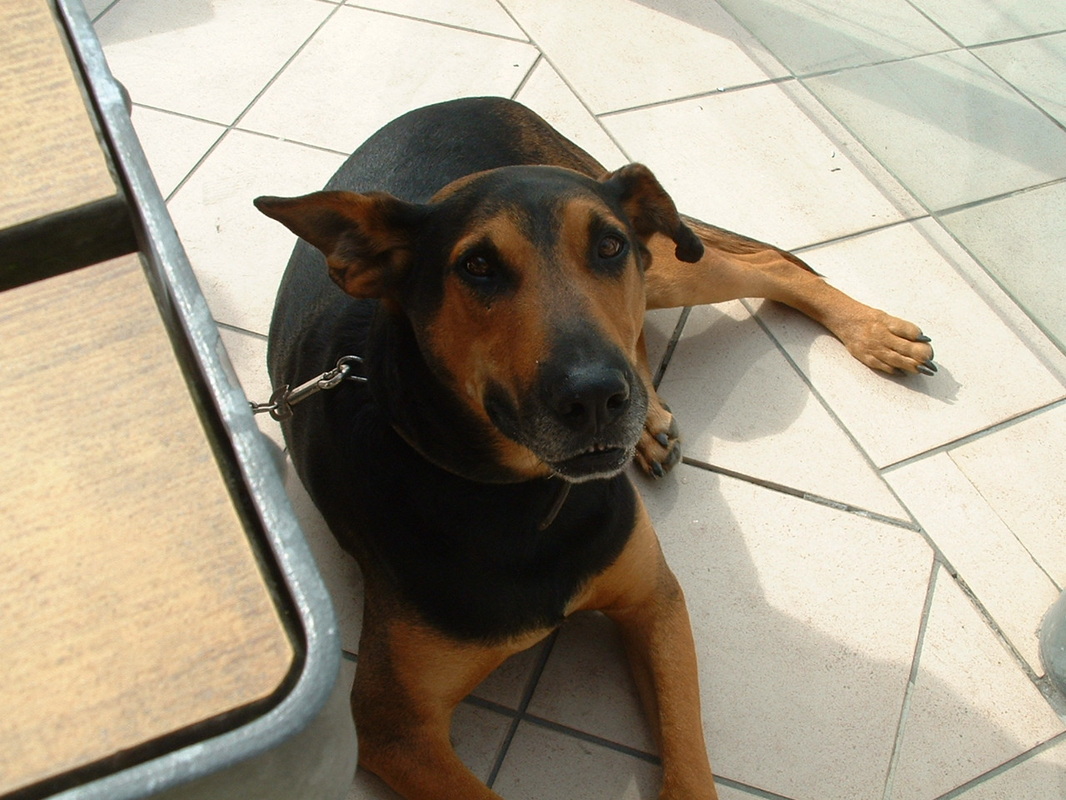 Can we go now, please?
He jumped into the back of the Berlingo without fuss and settled into the open cage. Documents and a few croquettes duly transferred and we were on our way at a quarter to nine. I love these softly undulating and straight roads in the Beauce with just enough wiggly little villages to break the monotony and we made very good progress past my overnight rest and on through Blois to Chateauroux. There, at McDonald’s we found Georgette and Marc, a retired French couple from the Corrèze already waiting for us. We walked Tyson on the lead and introduced him to his new companion, a little Terrier called Fenders. The latter was a little put out at first at all the attention that Tyson was getting and snapped aggressively a few times while, in the manner of many large dogs, Tyson leapt back and didn’t rise to the bait. After a few photos we went into the sun drenched terrasse for cool orange juices, and water for the dogs. Fenders had one last go but Tyson had had enough and lunged back showing a fine set of teeth. That was enough for Fenders, with a squeal he retreated and no more was heard from him. 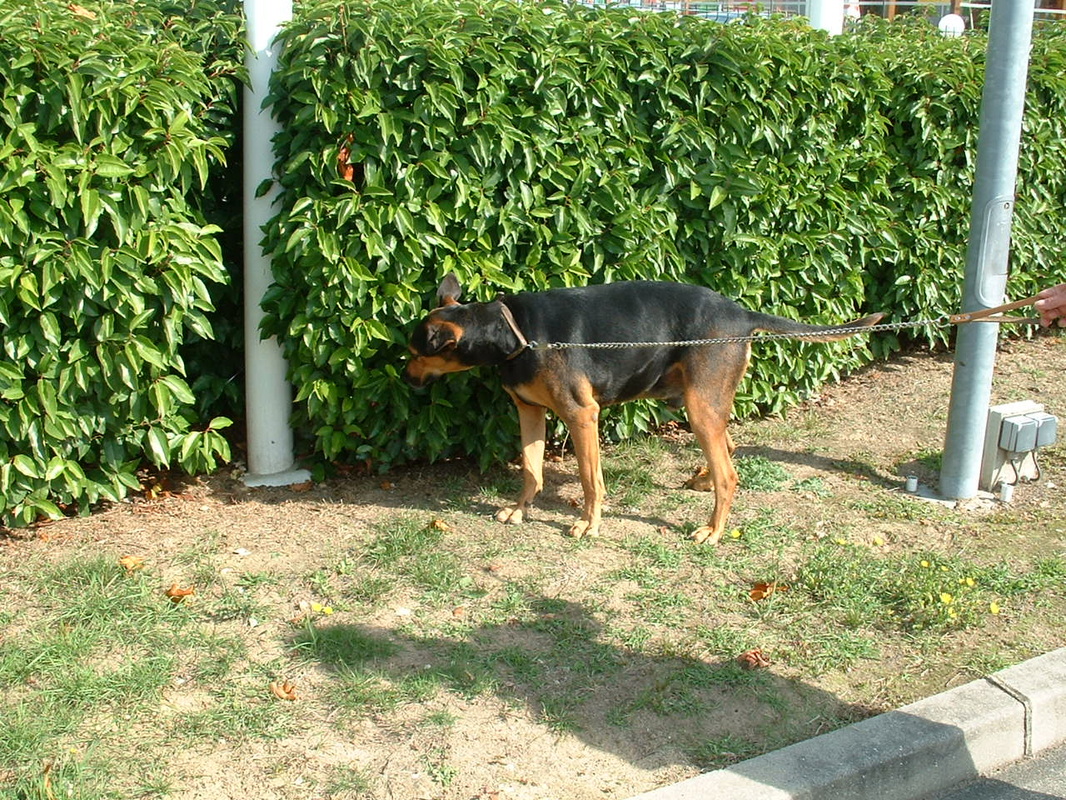 Hmm, interesting. I think he's been here before 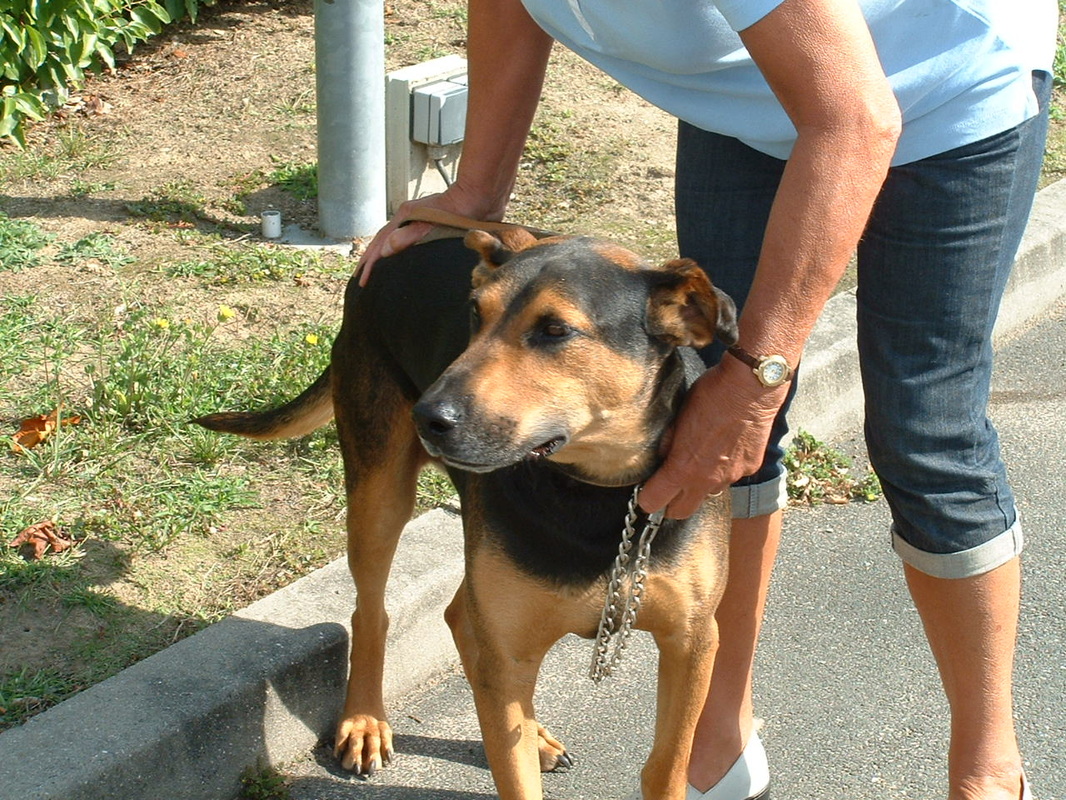 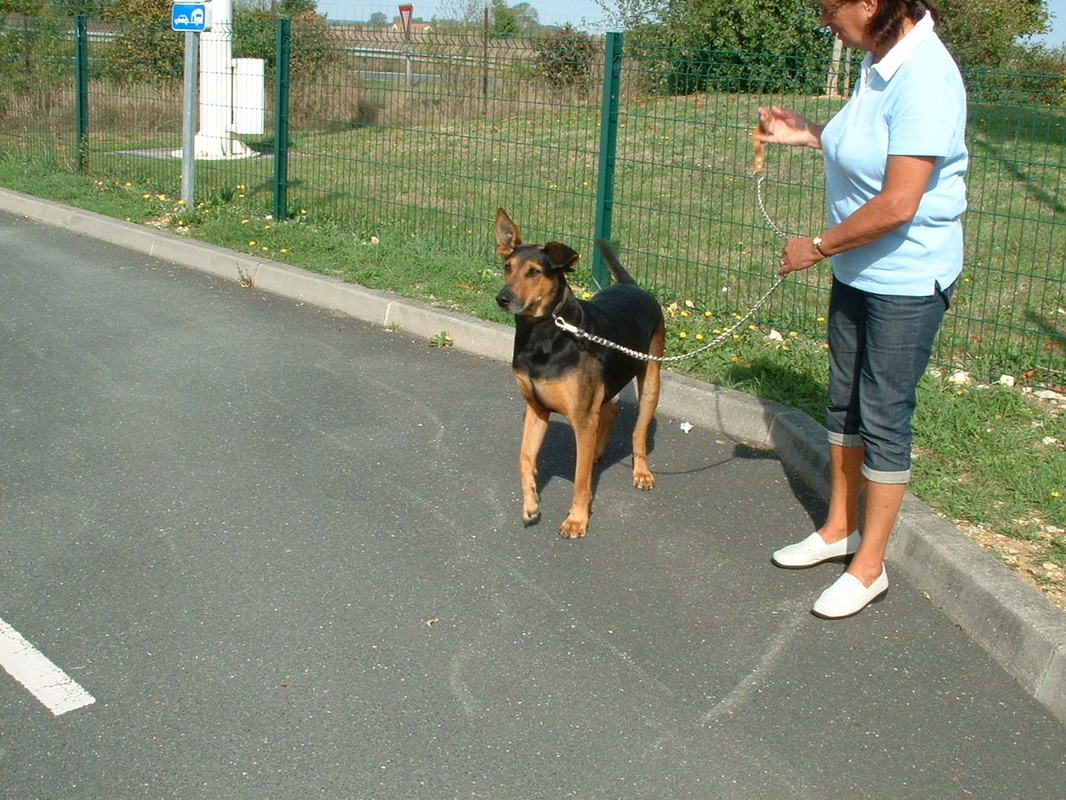 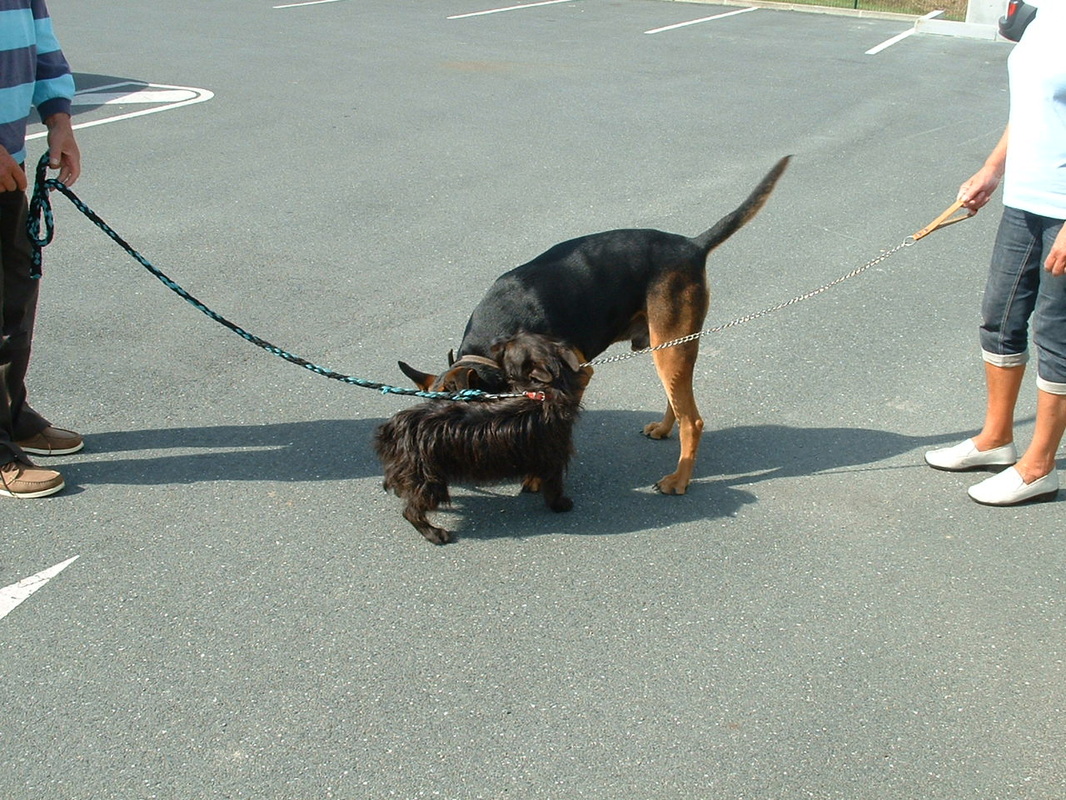 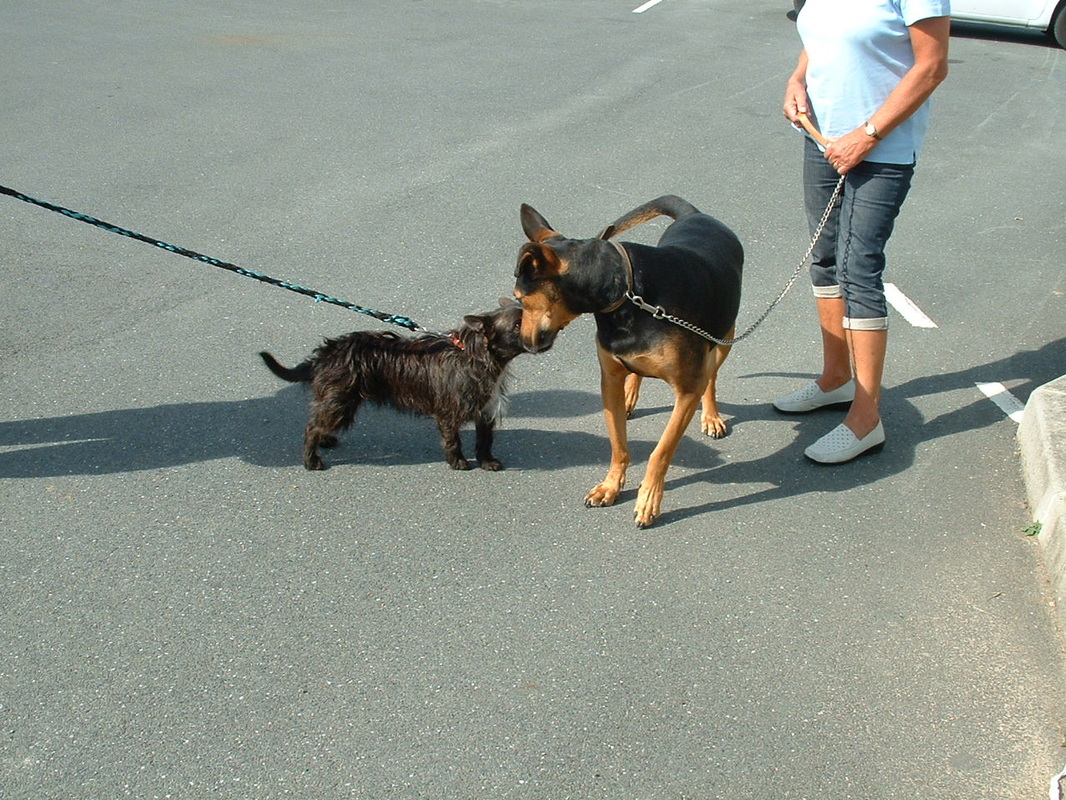 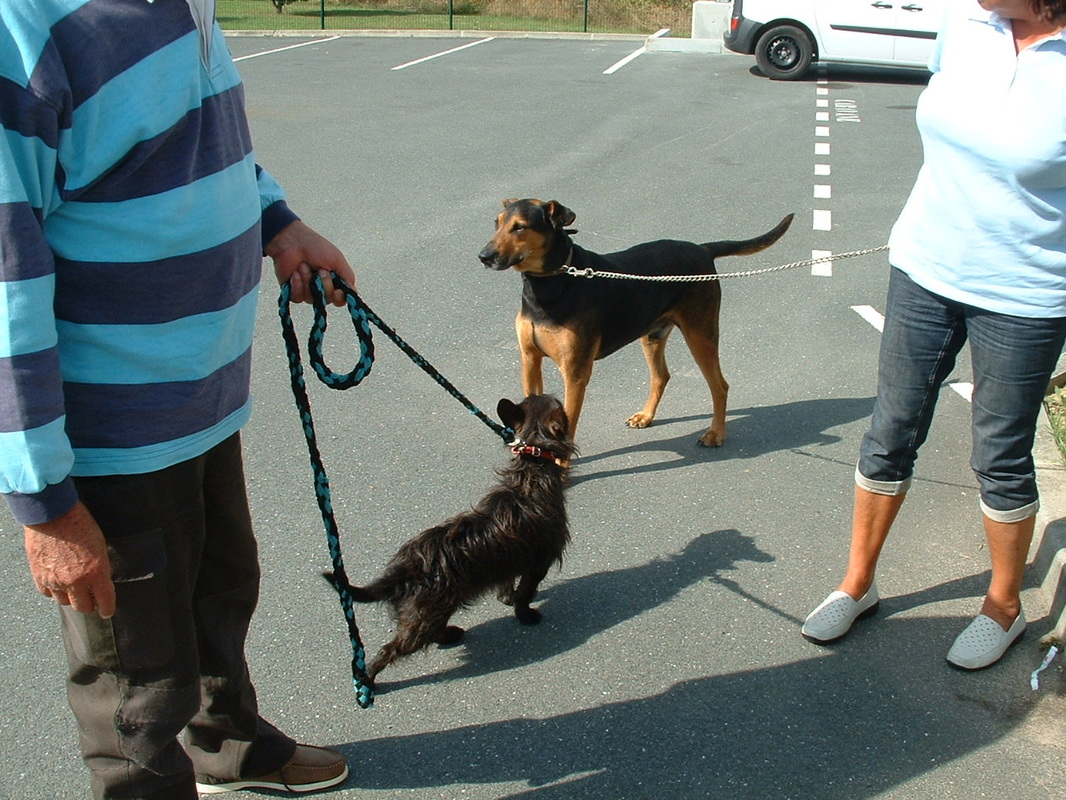 Might be wise to keep a little distance for a while
I checked my emails and then we were all on our separate ways. I arrived back home at 3.30pm and later heard that all was well with Tyson in his new home. With, the now friendly, Fenders, a cat and horses for company and a large terrain to run around in it seems that all his bad memories of the past can now be finally banished. I do hope so. 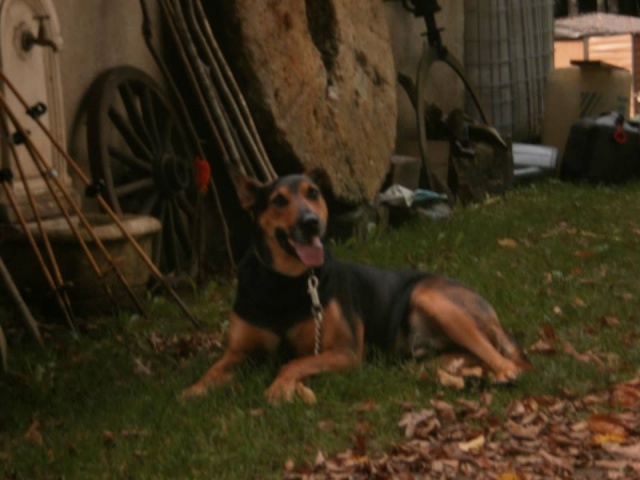 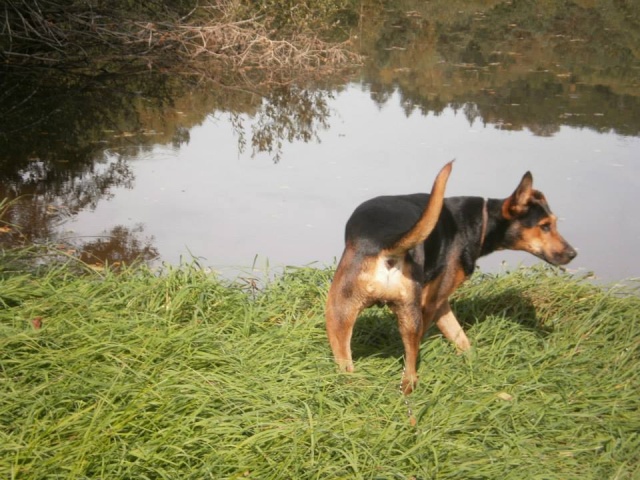 Umm, which way round? 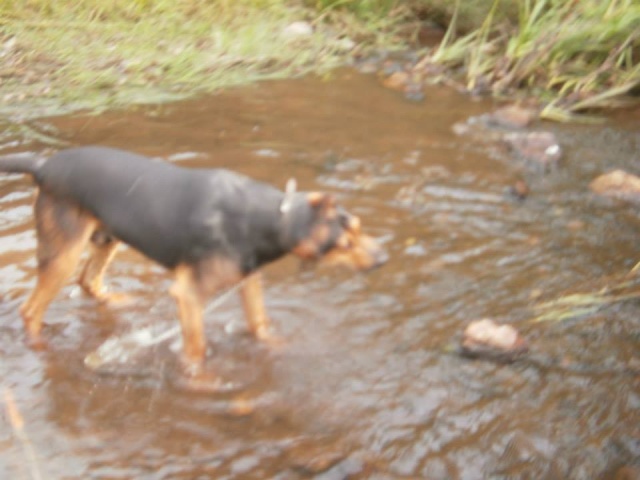