First, a mention of some changes. I now make videos while on the road and, as they carry commentary relevant to the journey, watching them gives a better understanding of it. However, if the content is too boring, I think there is sufficient text to nevertheless give the flavour of each expedition. For those confused by all this, a simple email to my address at the top of the site will prompt a response from me as soon as I return home. I welcome equally any comments, complimentary or critical, of this new style.

To see the videos in the text, copy and paste the links embedded 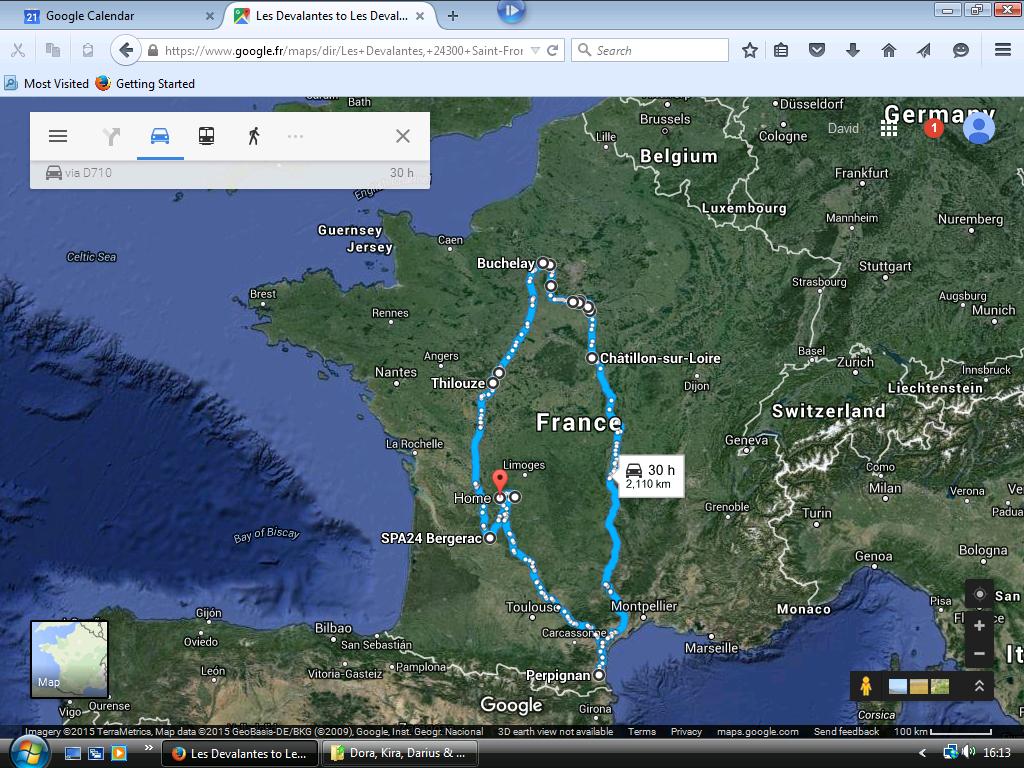 On a Tuesday in May I set off from home heading for Perpignan to collect a couple of Spanish refugees for PAD, the French Dobermann association. It was to be a full week with another Dobie to follow and then, to round it off, a Braque for Phoenix.

The run down was uneventful and I arrived at my destination for the night, the routier in Fitou, north of Perpignan, in good time for dinner at 7pm.

After parking the car and Teardrop in a suitable out of the way spot, always mindful not to take up valuable lorry spaces, and transferring what was needed, Kindle, tablet and lantern, to the Teardrop, I wandered across the rapidly filling park to the resto on the other side of the still busy old N9. Inside at the bar with my first kir, the only other occupants were 2 Dutchman who eventually were directed to my table in the salle. Very good company, 2 of us continued in deep conversation even after the first one left for an early start in the morning.

After dinner we wandered through to the bar where I ordered my little coffee but he had another kir. He wanted a smoke so we sat in the warm evening air at a table outside, alongside the now much quieter road. Coffee and kir finished but we were still talking, and, with neither of us on early departures in the morning, decided on a little digestive to accompany the interesting exchanges. He had a cognac, me a Calvados to go with another 'petit cafe' – cafe calva. This went on for some time and, by the time we went our separate ways I was feeling distinctly, shall we say, sleepy! I summed it up in the following short video.

Not required till 10am the next day to meet my 2 passengers but unable to sleep so late, I was up at 7 and left before 8 after my final visit to the resto and its facilities. Fine and sunny, the day promised well and I was glad, for all of us, of the air conditioner

After a short re-fuelling detour I found a spot near the junction 41 peage of the A9 and settled down with my Kindle to wait. Dead on time, first Marie-Chantale, a Frenchwoman who lives in Alicante and then Miguel Angel the young Spaniard who was bringing Kira from Barcelona, knocked on my door. Along with Dora who Marie-Chantale had collected from Madrid, these were my charges for the next 24 hours

We walked them both around for a while, exchanged paperwork and loaded them up for photos and departure. 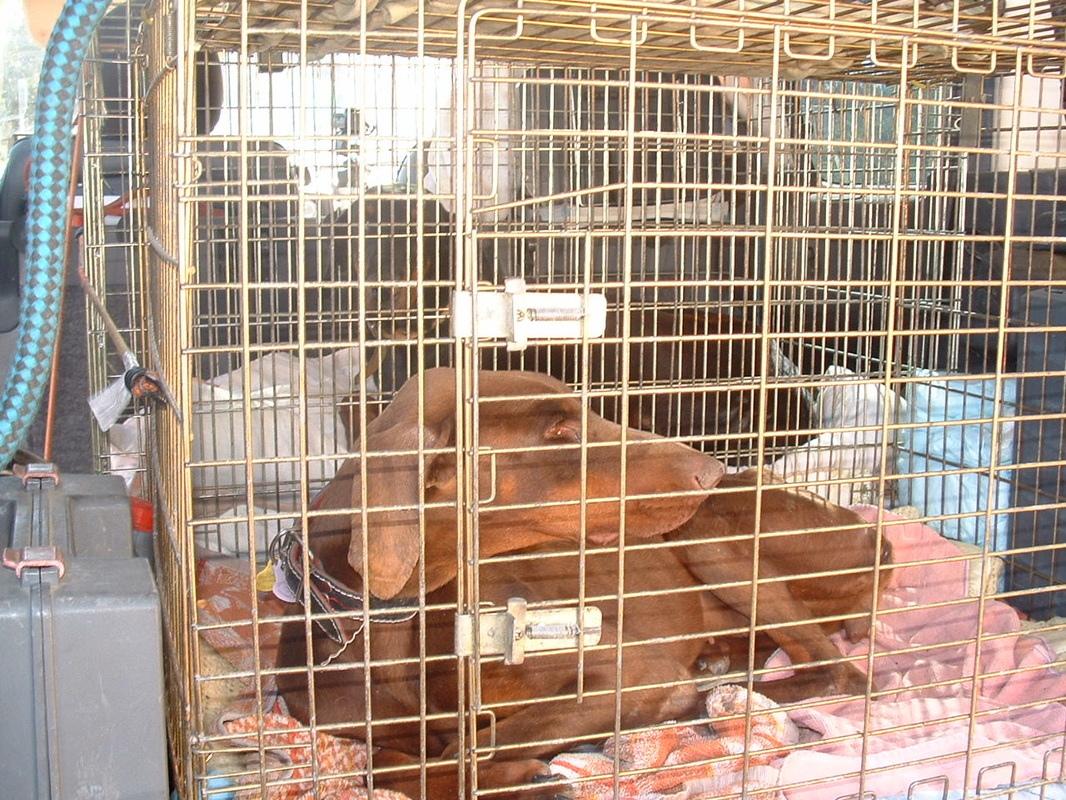 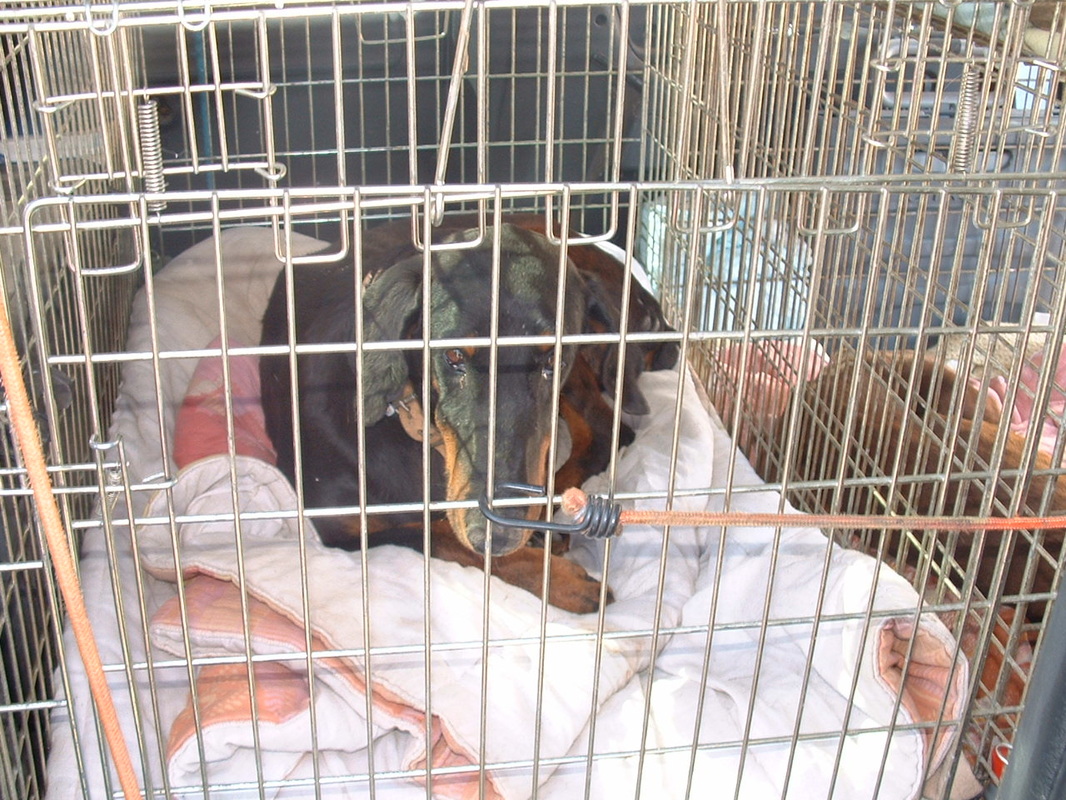 My route, including this trip but as you will see for the last time, took me north through Montargis to Fontainebleu and then around the various autoroutes close to Paris. Eventually emerging onto the A13 to the west of the city to arrive at my first destination at Mantes la Jolie. In nearby Buchelay there is a refuge/pension to and from which I have visited several times before for PAD. In the following video you will see why I no longer go that close to Paris when coming from south or east and heading west. There is no one outer ring worthy of the name, unlike the A/N24, the Francilienne or more colloquially, the cent-quatre, which traverses the south, east and north. I have since found a much better way after Fontainebleu.

My frustration at this knew no bounds and some editing has been required as you can imagine. I arrived an hour and a half later than estimated but all was well with my passengers who, as always were received kindly and posed for pictures before being installed in their new temporary quarters. 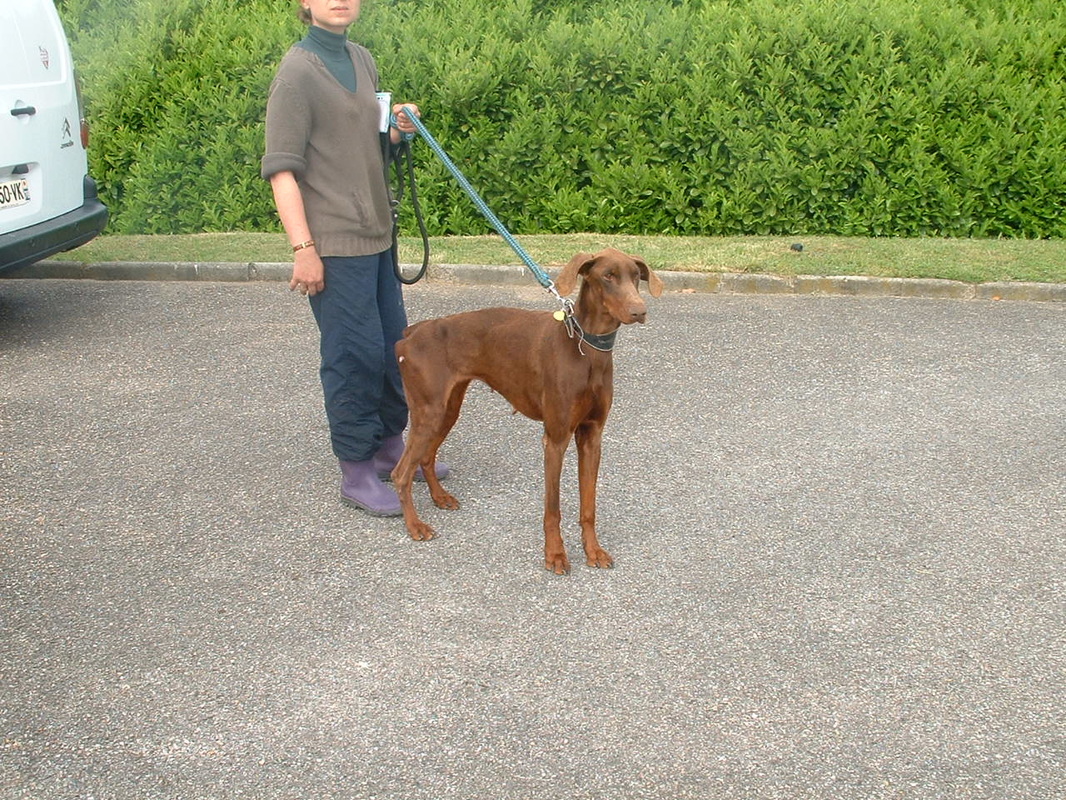 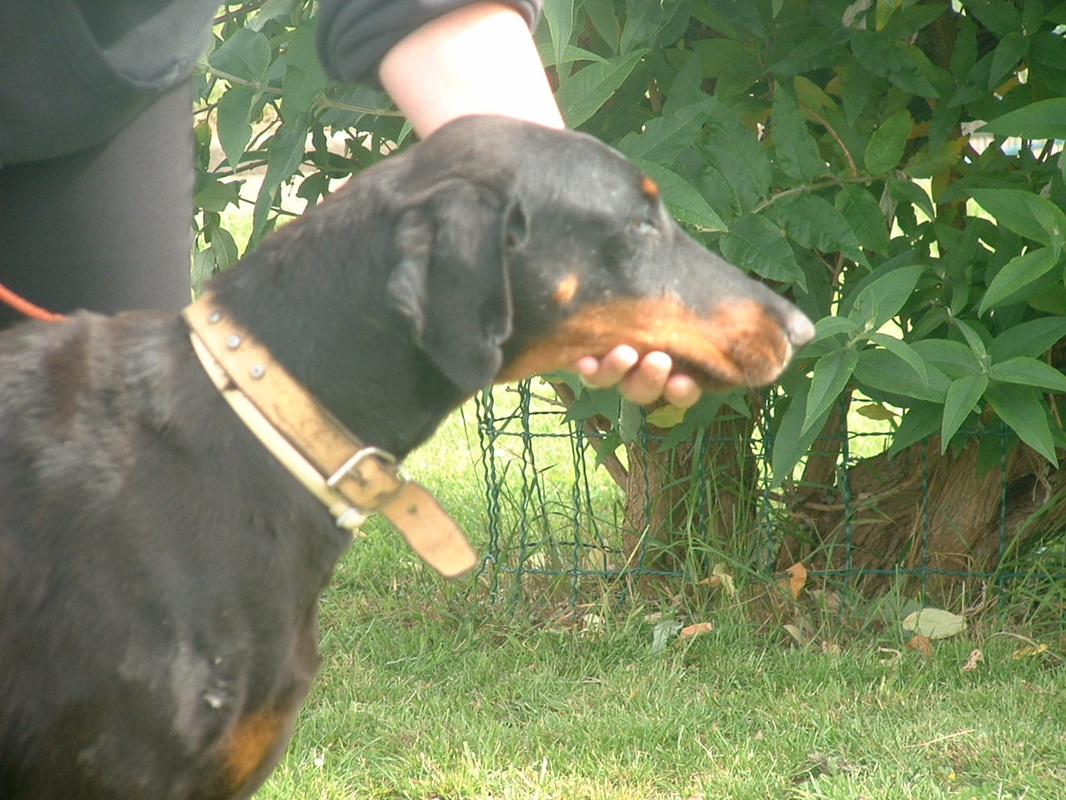 and Kira
Once that was done it was time to meet Darius, he has been here some time and is suffering from a disease called the 'wobbler' . Yes, even in French. It leaves its victims with weak hindquarters and I believe is liveable with if not too advanced, but incurable. Darius was considered a suitable candidate for more individual loving care in a foster home and, for that purpose, I was to take him the relatively short distance to a small hamlet near Tours. 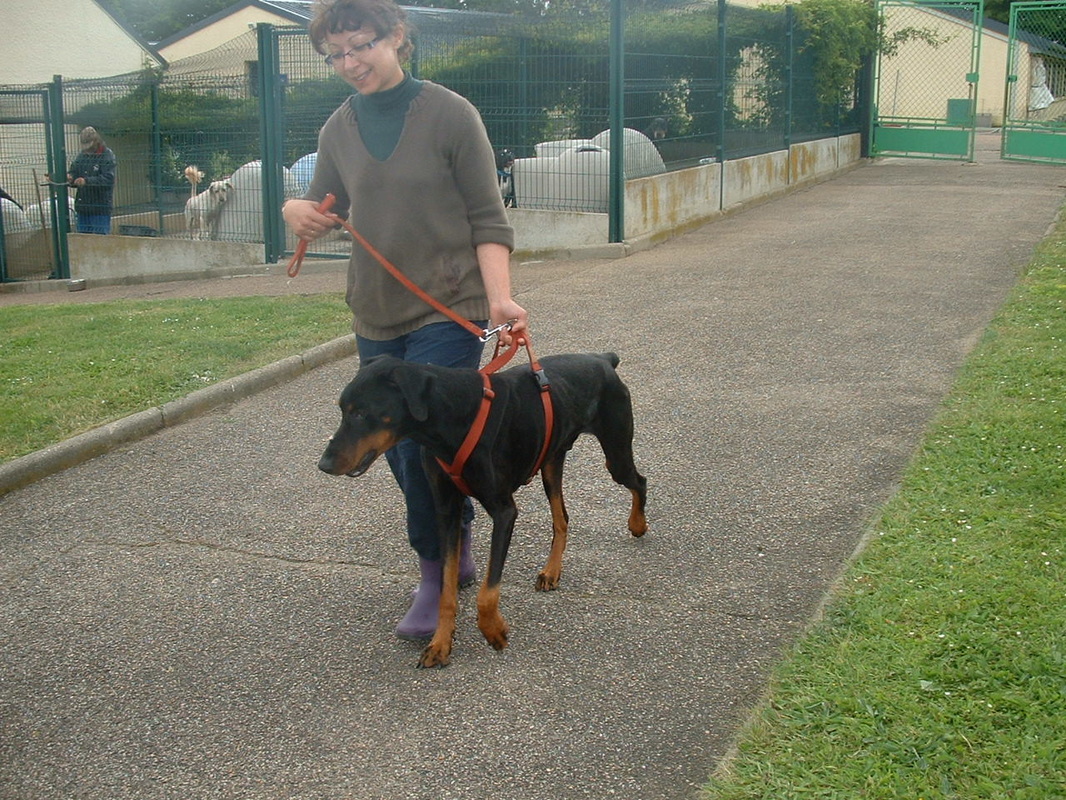 Darius arriving supported
As you can see, the care assistant helps him along by bearing a little of his weight. 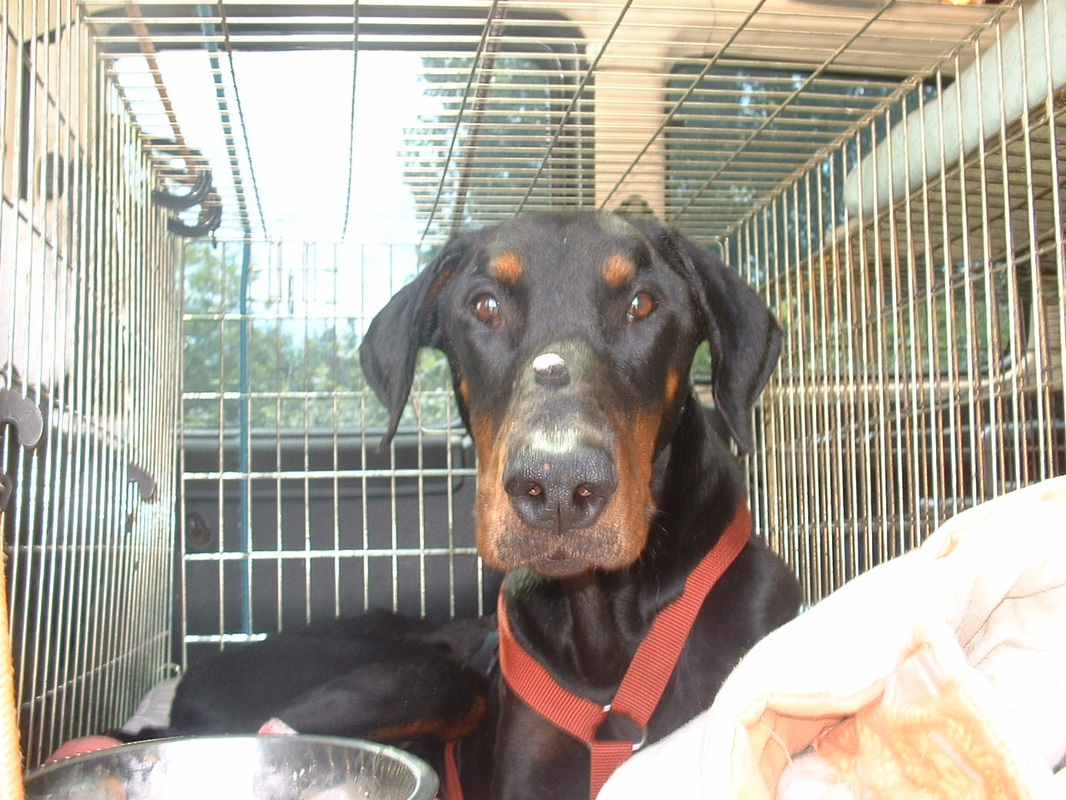 Darius installed
He climbed in fairly easily with a little help and his other treatable affliction can be seen on his nose. 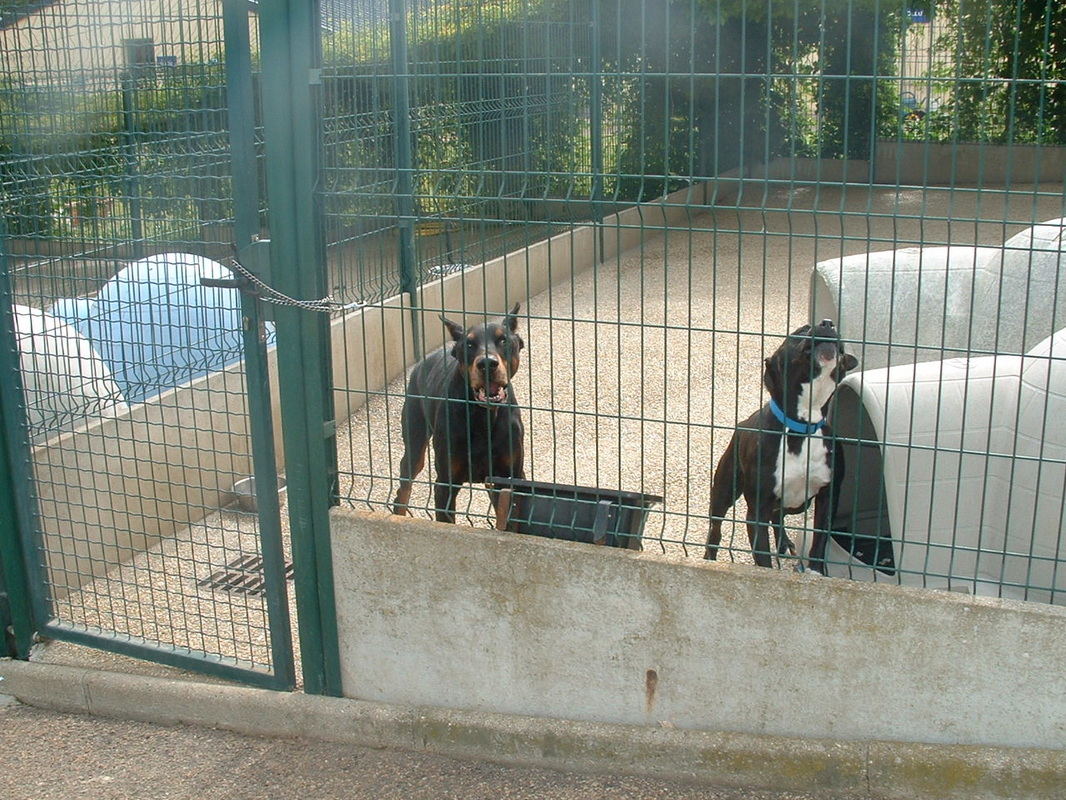 2 residents
Before leaving I spotted these 2 other inmates. The erect ears on the Dobie, is achieved by cutting the muscles in a certain way, a practice now thankfully banned in France for new births but still prevalent in surrounding countries. It is done I think to make them look fiercer, and is successful in that respect, but in no way does it make them fiercer. They are just as soft as any other dog, Dobie or otherwise.

We arrived at the hamlet and the home of Agnes, Darius' new foster mum at 3.30pm and, after a couple of photos on the road, 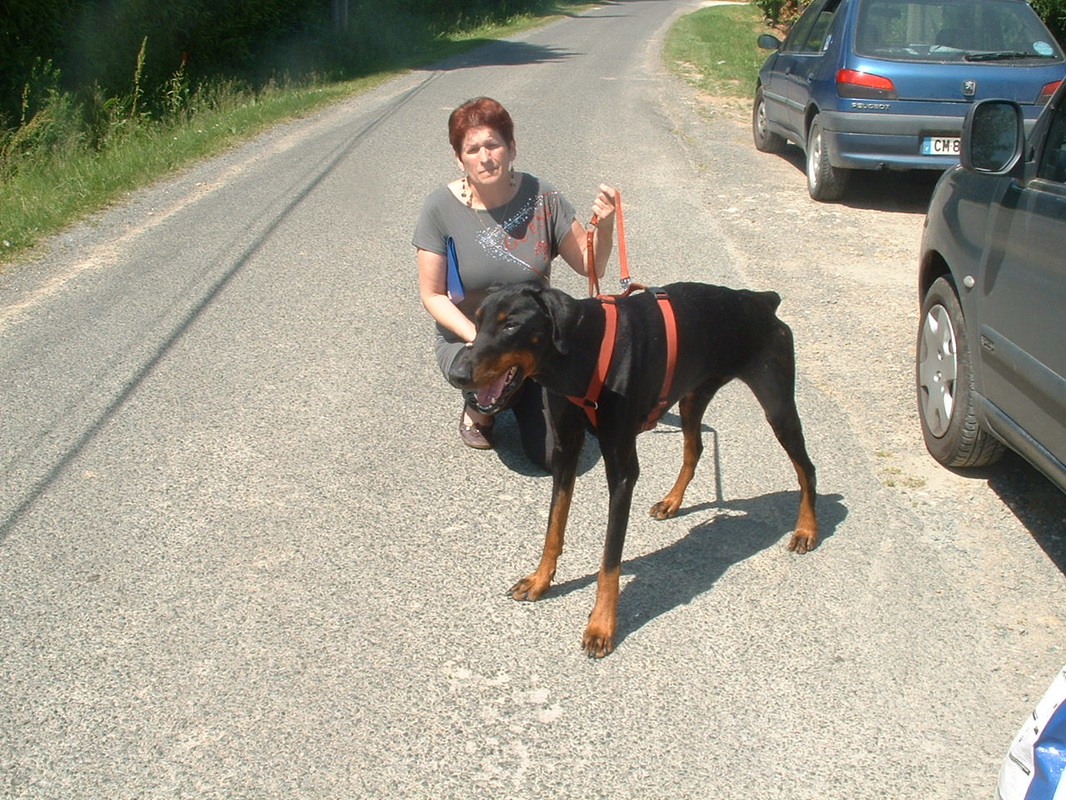 Darius with Agnes
went in to meet the family. 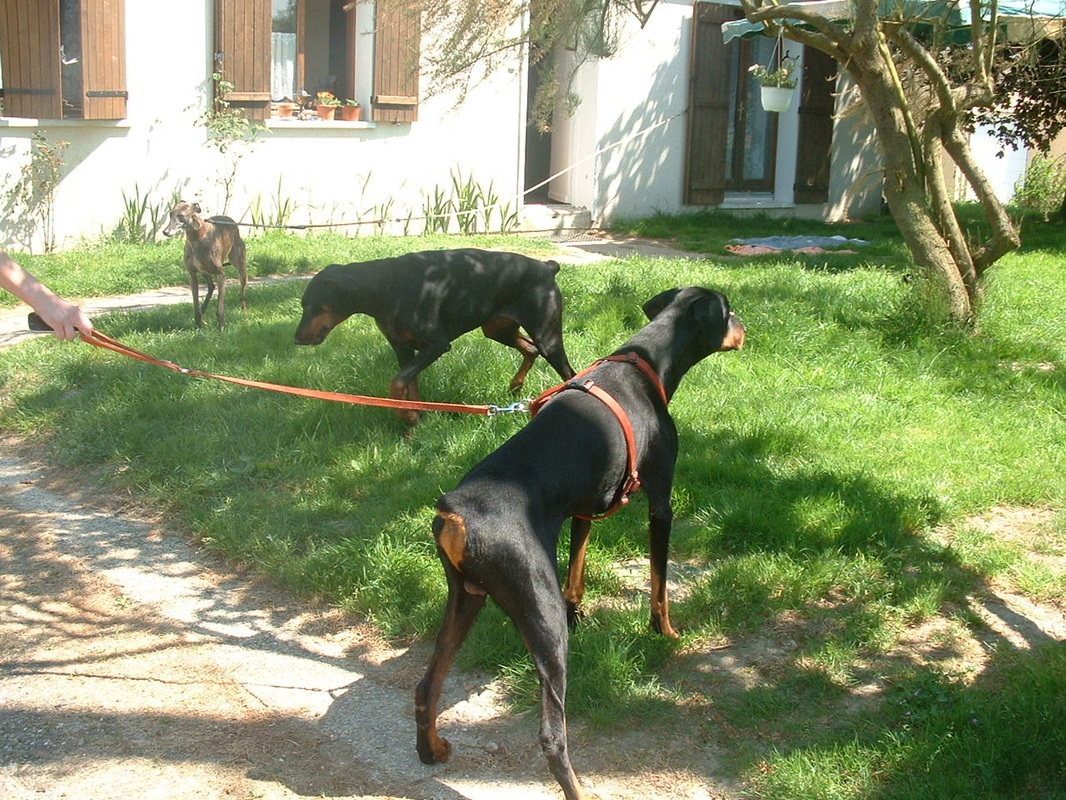 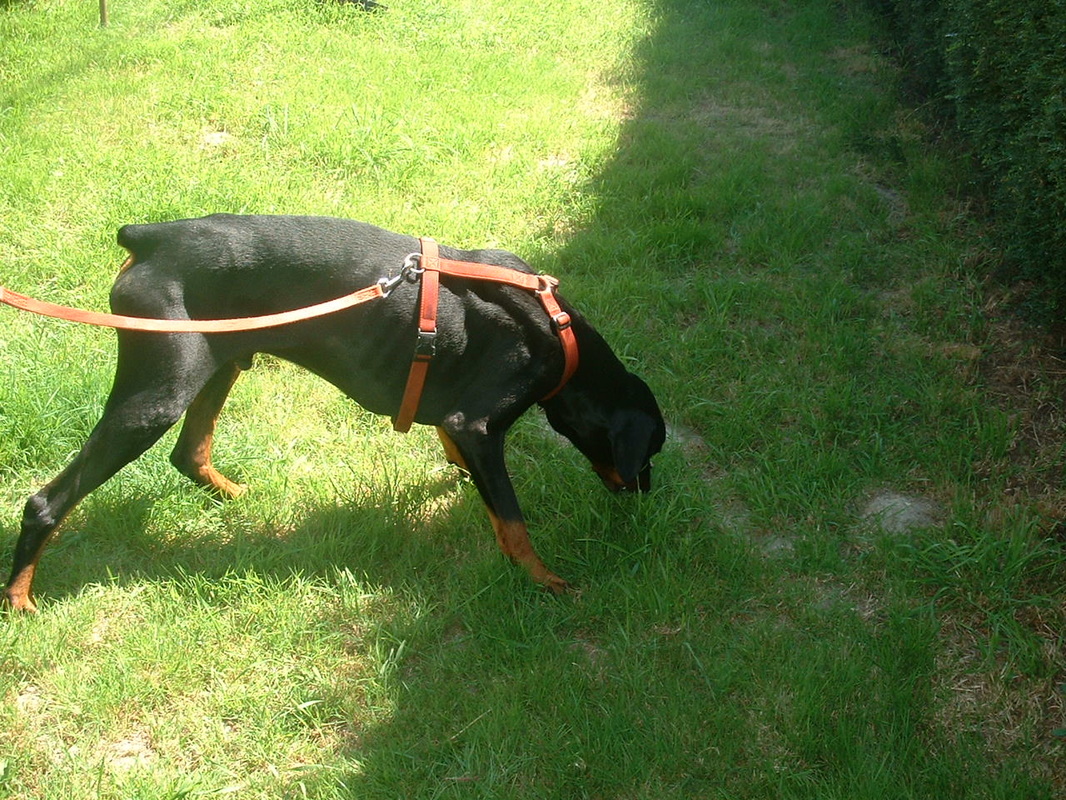 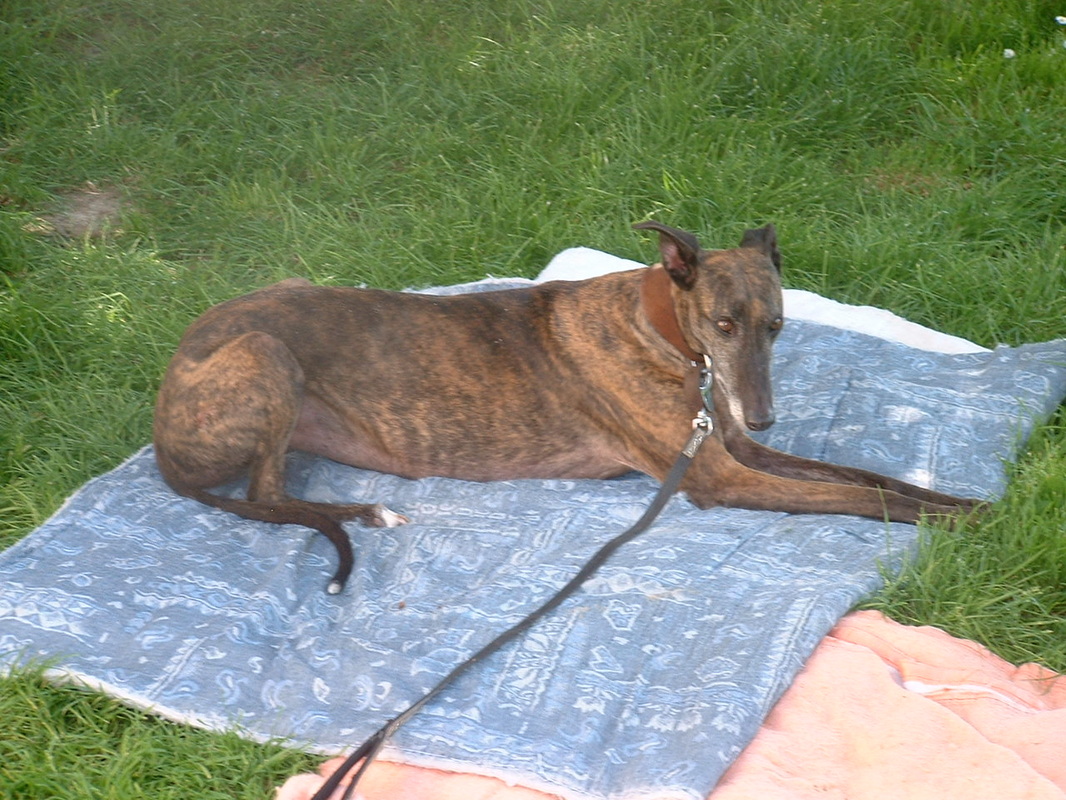 I can never resist a levrier
http://youtu.be/15S7JcMaC1A

Shortly before opening time I arrived at the Bergerac SPA and, once in, said hello to a few inmates before quickly loading the black Braque, Frisk, and getting on my way again.

Arrived at Simonie' s the Phoenix fosterer who shifts her charges at a rate of knots, hence I am a regular visitor here with new hopefuls. Took a couple of photos of Frisk but, in keeping with his name he is a bit difficult to pin down for a pose! 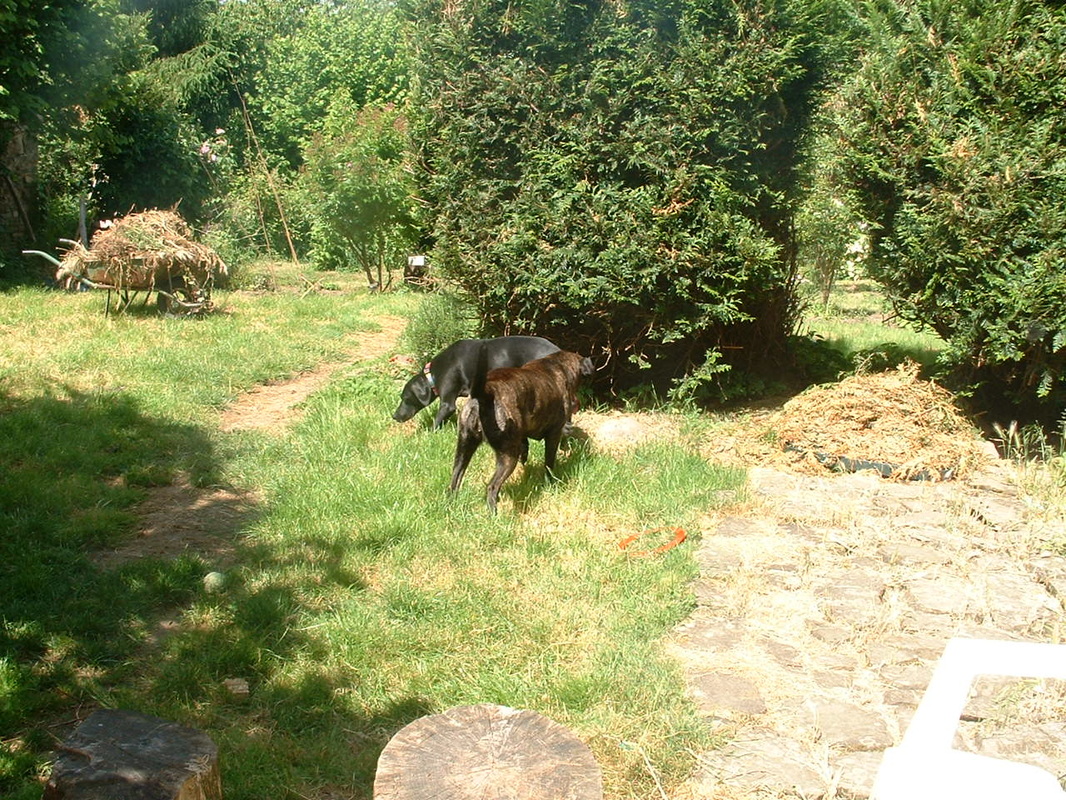 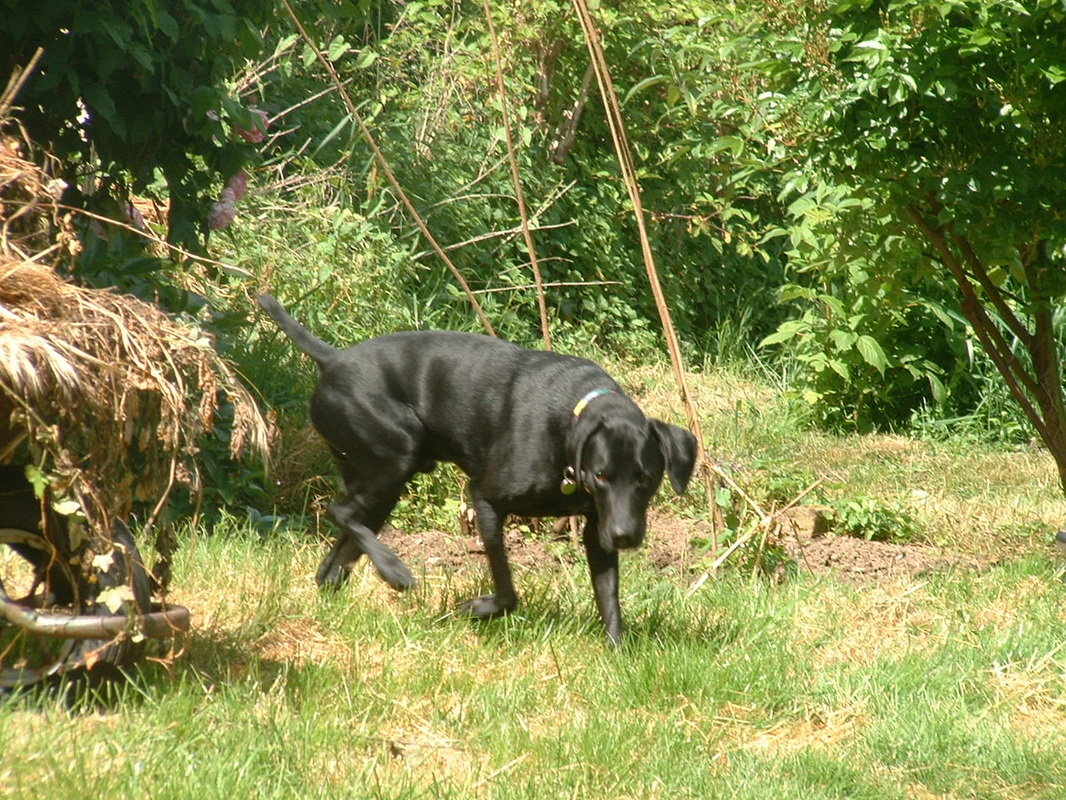 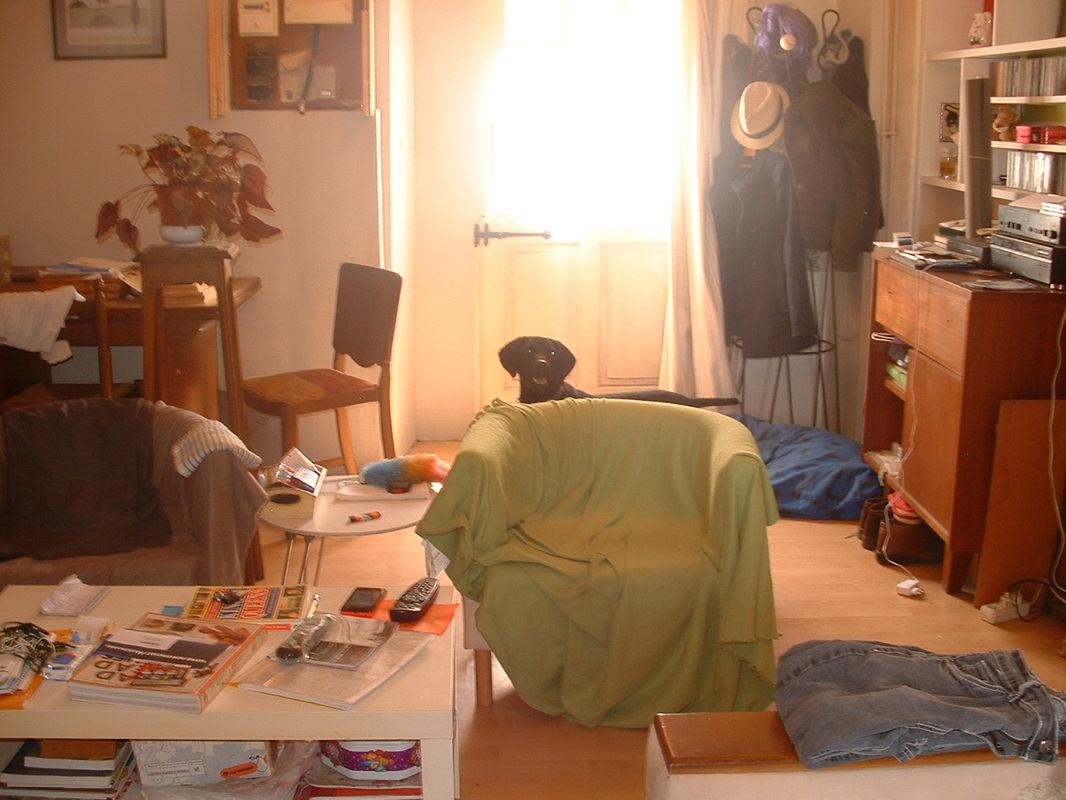 Home again, after 4 days on the road, at 1pm

Update. As of August 2015, both Dora and Kira, also Frisk, have permanent homes. Darius continues to improve in the gentle care of Agnes.

And, in September 2015, Agnes became yet another failed fosterer and adopted Darius.