Our time all together, Fran, Ramona, Ebony and me was coming to an end. Elaine was shortly to arrive from England and a date was decided for me to take her north to Brittany. A rendezvous had to be made at the vet, which was fortunately more or less on the route, for her final check and for the bill to be paid, Elaine had planned to stay at the cottage for several days after our arrival so that Ebony could have a break from travelling and also some time to get used to, part at least, of her new family as Elaine was bringing Skipper with her. He is a Jack Russell of fairly advanced years and it was essential that they get on. Her other dog, a Caniche and not a good traveller was waiting back in Devon. 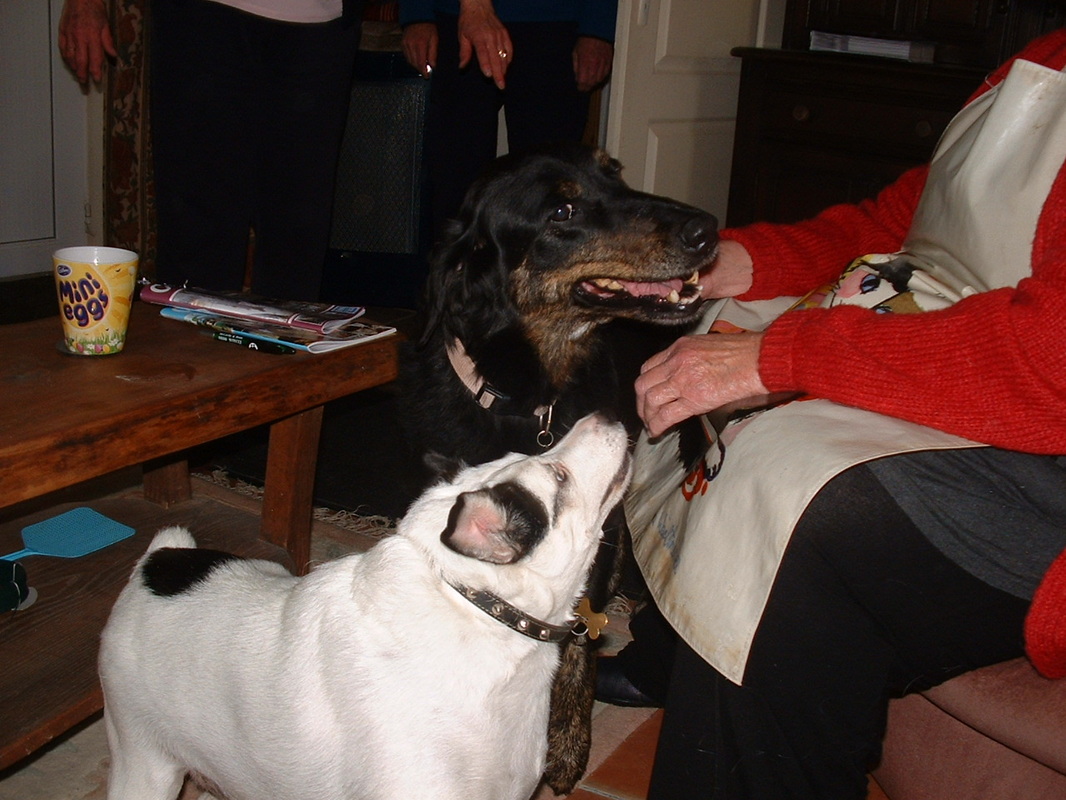 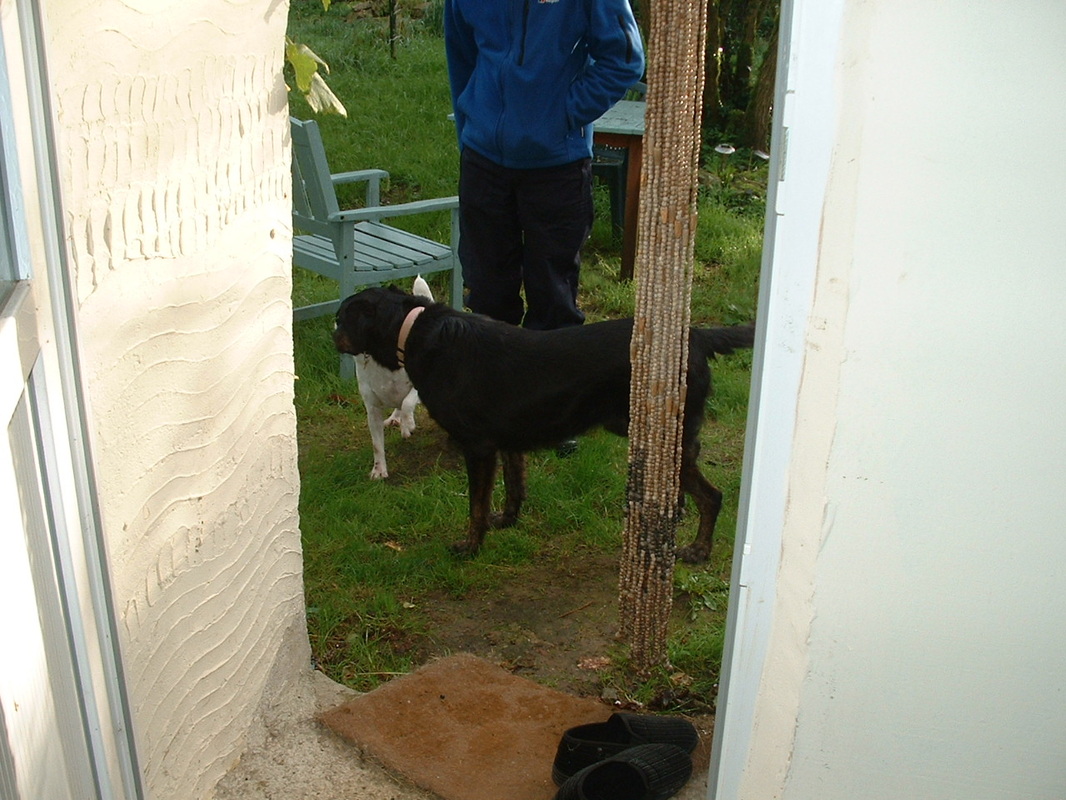 In the garden in Brittany
However, almost at the last minute we heard that my Father, in his 94th year, had been taken into a nursing home. His wife of a similar age could no longer cope with the stress of being an Alzheimer carer. We, naturally, wanted to visit him in Caterham and so it was decided that Fran would come with me, we would take the caravan, and that Ramona would have a short holiday in our friend Sharon’s kennels. That was not all. Another rescue organisation, Orphee, based in the Deux Sevres, had a Spaniel to go to St. Malo to meet his new owners from Jersey. Could we take him too? I was not keen, we had a ferry booked and a tight schedule but I did suggest that it might be possible under strict conditions of precise rendezvous which would not inhibit our progress. At the same time PAD, the Dobermann association, wanted a dog collecting from near to St. Malo and delivering the same night to Mante la Jolie, on the western side of Paris. That of course was impossible. After leaving Brittany we were to overnight near to Rouen and then to have a 2am start for Dieppe the next morning. I did, though, say that if the dog was ready on time as we passed by we could take it to Caen and handover to another PAD member to complete the journey.

As things turned out, both these proposals came to nothing for different reasons and, again as transpired, it was fortunate. We would have been sorely tested to make the ferry with all that going on.

North now from the brief stop at the vets we picked up my normal route at Maisons Blanches, the Centre Routier where the D948 crosses the N10 and takes us on to Niort. Roads were clear and we made good time with a brief stop for lunch at Benet, just to the north of the city and then on to our destination for the night, the routier at Grand Champ beyond Vannes. Easy to spot this from the main road in the cutting, an old Volvo tractive unit sits high on a pylon in the lorry park!

We arrived in good time before the dinner hour and Fran sorted out the caravan for the night while I walked Ebony round the still empty lorry park for a while. As usual she was as good as gold and happily returned to the comfort of the car after her first meal of the day while we went into the bar for aperos and a very welcome meal.

It rained for most of the night but we weren’t disturbed in our comfy bed. No sound from Ebony in hers also. We all awoke refreshed in the morning and after my usual 2 little coffees and a cleanup were on our way again about 9.

We were heading for a little village between Pontivy and Guingamp but that was easier said then done. The signage in Pontivy left a lot to be desired but, nothing daunted, the sun had come out, the satellite dishes still faced roughly south east and I was soon heading west out of the town before navigating through country lanes to get back on track to the north. The village was soon found as was the little lane on the outskirts. Elaine’s  description of the cottage led us to the door and with her two good friends who had travelled with her we were met at the gate. Skipper too was there and the meeting with Ebony went off without a hitch. We left them in the back garden to play while we had a cup of tea inside and a chat. A couple of hours was spent there as we had been invited for lunch. Elaine was missing for a few minutes because she took a helping to the elderly chap next door, a regular favour when she is in residence. It was his dogs that chased alongside us down the lane when we left, diving dangerously at the wheels for the first kilometre. Elaine is working on him, trying to persuade him to have them neutered, some of them are related and there is a suspicion that the couplings include fathers and daughters and mothers and sons. Old habits die hard in the country.

We headed north and east on the long good roads towards Caen and then beyond on the old N13 past Lisieux to the large and very popular routier at Boissy Lamberville. The parking area is enormous, room I should think for several hundred lorries. We parked initially in the car park near to the restaurant but after a terrific meal (Tripe a la mode de Caen for me, delicious, and rare, I never get it at home, it makes Fran feel sick just to cook it!) drove all the way down to the back of the park, at least 300 metres away, in a quiet corner to bed down for the night. With 2 hours still to travel to Dieppe in the morning and a booking in time of 0430 it was going to be a very early start.

And so it was, we moved off in the quiet dark to a friendly wave from the all night security guard. The trip past Rouen was without incident, I normally pass this city to the east but the excellent signing left nothing to be desired and Dieppe was reached well before the deadline. 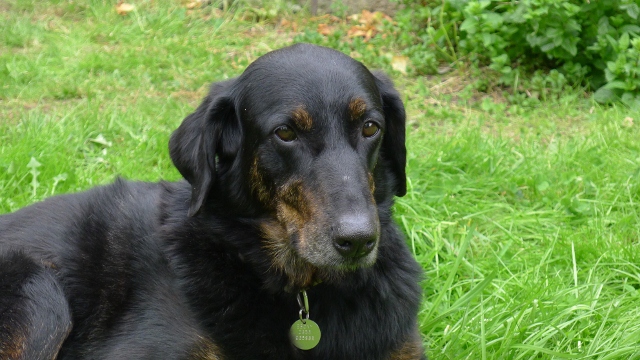 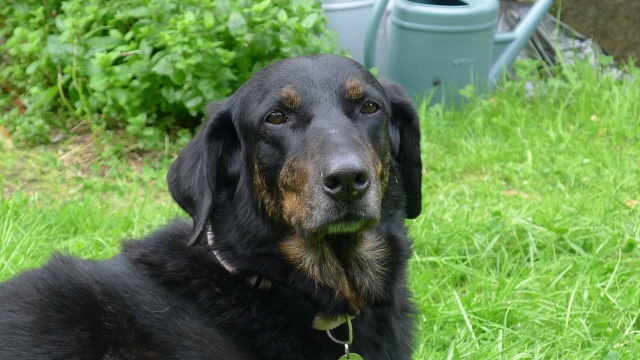 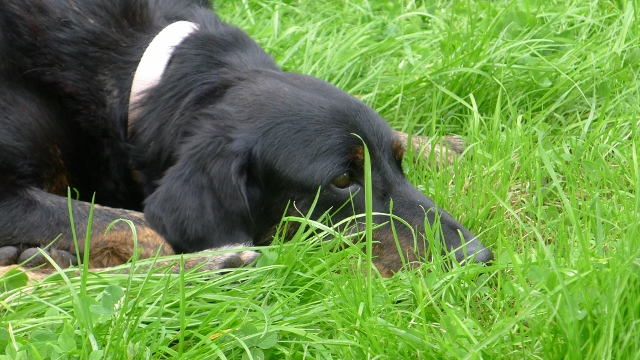 In the garden in Devon 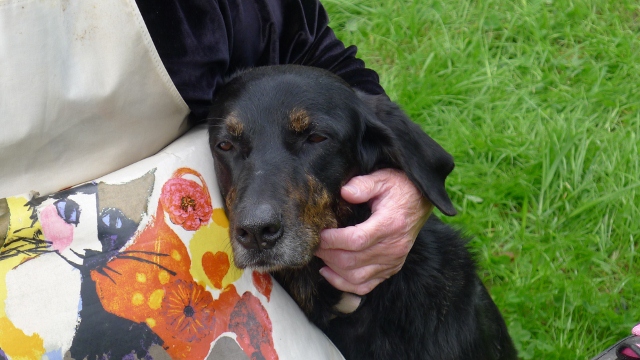 Contentment
Back home again Elaine kept me abreast of Ebony’s progress, her health continues to improve and she has settled in well with her new family. The female Caniche has become her firm friend, as has Skipper. We are looking forward to seeing them again next year.

Total distance with Ebony from Carcassonne to Brittany and return 1,922 kms