Eros was a very nervous Dobie who had been taken into care by PAD after his master in Paris had been involved in a near fatal, but disabling, traffic accident.

I had already taken him from foster mum Virginie in Bordeaux last to Pau, but big city life in a small apartment didn’t suit him so he was soon back where he came from.

Now he was to have another chance at happiness. A family way up in a village near to Vesoul in the Haute-Saone had watched him on the PAD website and decided that he would be a fine replacement for a much loved Dobie who died last year.

Thus I was once more on the road with Eros. Virginie, his fosterer in Bordeaux had taken the morning off work to drive him to Thiviers not far from me and close to my original route. This was because, nervous as he is, it was thought better not to be thrown in at the deep end with my 3 for the previously planned overnight stay. We met at the appointed time and with tearful goodbyes from her and her 2 children we were on our way. 5 minutes later, answering a phone call, I was back to collect his paperwork which in our anxiety for his well being on leaving a much loved friend, we had forgotten. My little friend Roady was with us, in a separate cage, due to the problems with our other foster, Sami, who doesn’t like male dogs. No trouble between the two of these though as they settled down within inches of each other for the long journey. 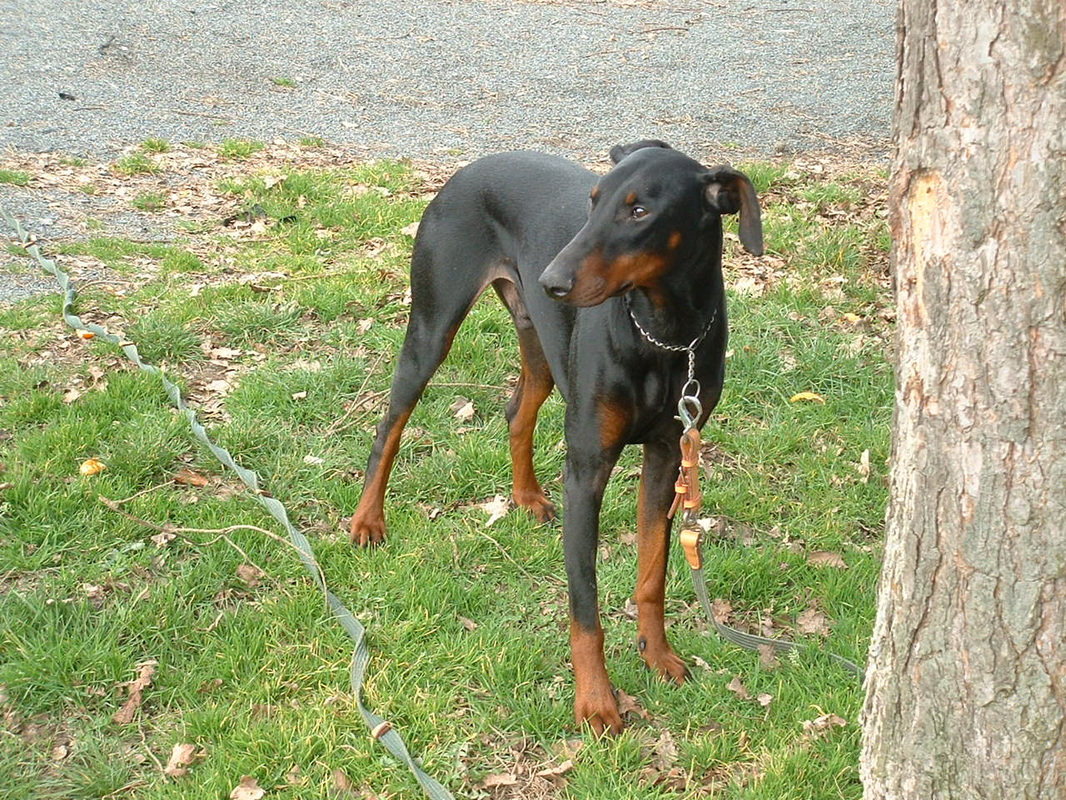 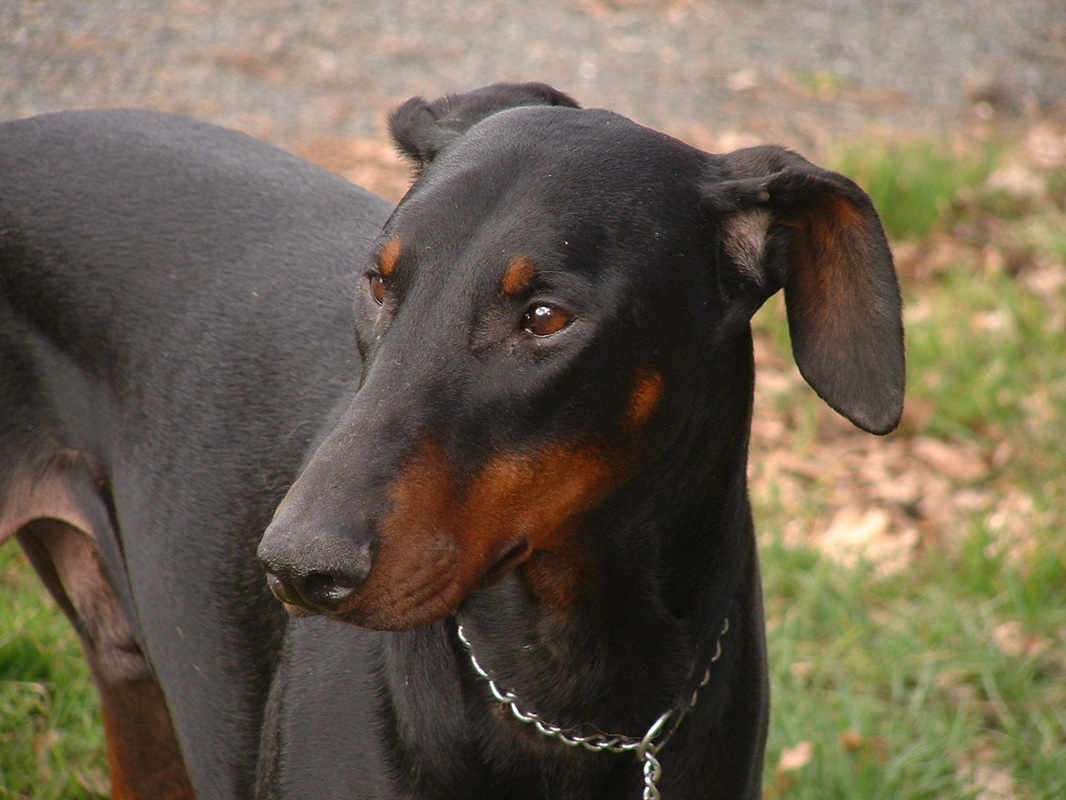 A tranquil break in the forest
We stopped just the once, about half way, in a large rest area on the edge of a forest. Eros readily jumped out after I had fixed the lunge rein on him and trotted after me as I led him to a convenient tree where he was secured with enough slack for a good wander. I then took Roady out and, after allowing the two of them to touch noses walked him round before tethering him also on a long lead. Both of them did what was necessary but refused a drink and then settled down to relax while I sat in the car and ate my lunch. Then we were off again for the remaining 300 or so kilometres to our destination. The traffic was kind and the towns and cities slipped by with ease, Moulins, Chalons and Dole. The latter where we turned off to take the direct route towards Vesoul and, after first checking out my planned stop for the night, a routier about half an hour from Eros’ new home, we turned off and soon found the village, arriving dead on time at 5.30. 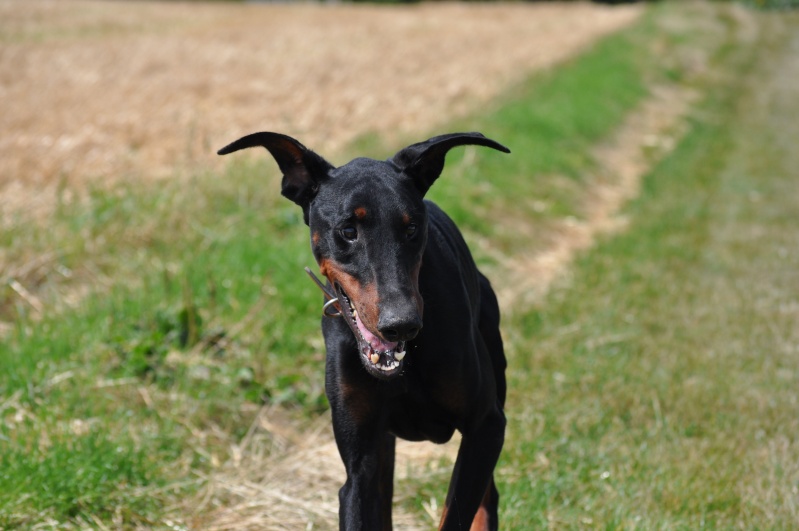 Running
Thierry met us at the gate and, in view of Eros’ known skittishness, invited me to reverse into the drive while he shut the gate behind us. Sylvie, his wife came out of the house along with their 2 children but it was some time before, faced with all these new faces, Eros could be persuaded to alight. When he did he trotted happily along on a short lead around to the back door of the house. Sadly, that was where the gentle introduction stopped. As the door was opened there was a loud and excited, but not aggressive, barking from inside. Eros recoiled but did enter with me while Thierry went ahead to calm the young Malinoise, Heidi, who was so eager to make the newcomer’s acquaintance. Eros put up with this for several minutes before he too started to bark back. And so it continued without pause until Heidi had been put in another room. Not a good omen. 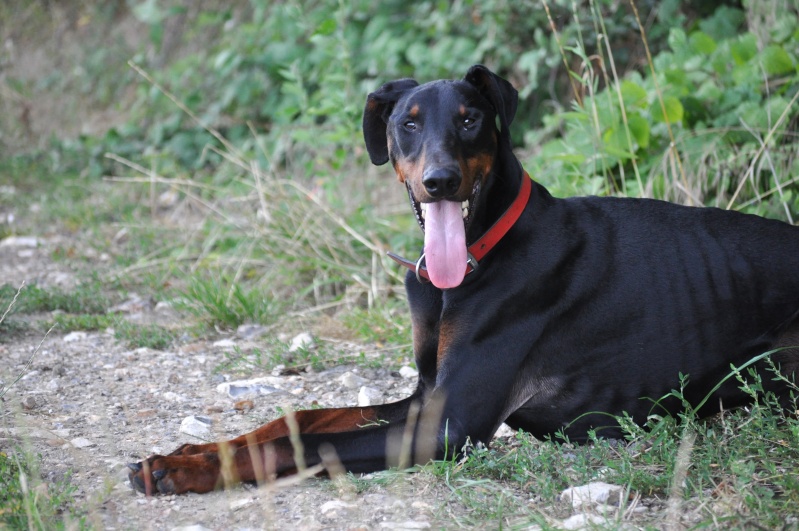 Repose
I had been invited, and declined, to stay the night but allowed myself to be persuaded to stay for a meal. I did though insist on sleeping in the car with Roady, he was being left out of things enough and I wouldn’t abandon him overnight. I thought longingly of the cosy routier waiting down the road and what I knew would be excellent fare there, but consoled myself with the thought of the 16 or so euros I would be saving! I began to regret my decision as the occasional barking from one room to another continued sporadically during the evening. 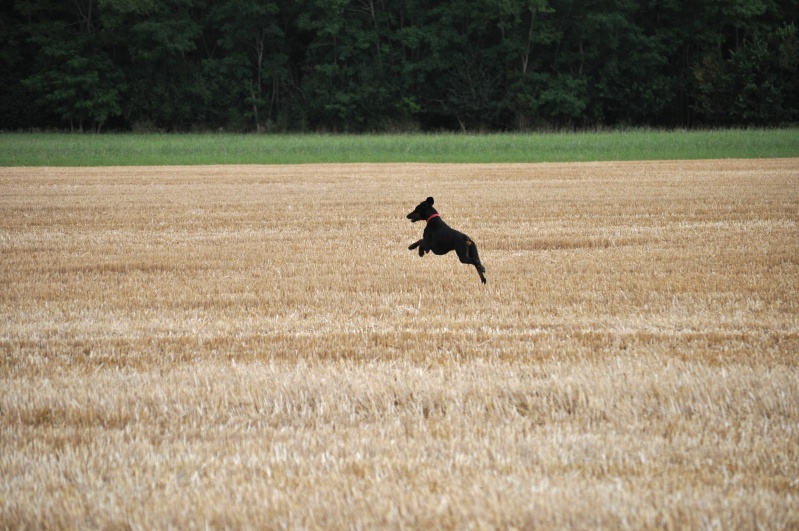 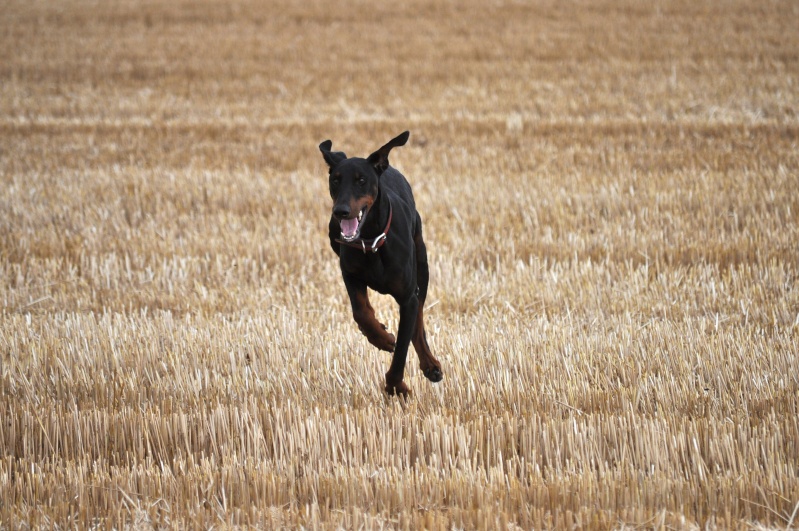 Flat out.......
I had been asked my opinion and replied that, as there was no malice only over enthusiasm of a still very young dog, patience would be required but remarkable results could be obtained within a few days. I said that it was necessary for Thierry and Sylvie to walk both dogs as much as possible each day together but on separate leads. To demonstrate this I agreed to go for a walk before dinner with Thierry with Heidi and me with Eros. It worked a treat. Eros was entirely unfazed by his companion and only a couple of times reacted if Heidi lunged towards us. I am sure that all would have been fine given time, and only a short time at that, after all he had had 3 or 4 Dobies to get used to at Virginie’s and had coped very well after the initial introductions. I thought therefore that all was well and it wasn’t until after dinner that they dropped the bombshell. They couldn’t accept Eros into their household. I was disappointed, I thought such extreme action after only a few hours of acquaintance was unnecessary, but it wasn’t for me to argue. It was fortunate that I had no other dogs to collect on the way home but I said that I couldn’t possibly leave with him unless authorised to by Mary, who organises these journeys for PAD. They rang her straight away. After a long and sad conversation the phone was passed to me and Mary said that she would get Virginie’s husband, Jean-Luc, to meet me at Thiviers but she would text me in the morning as we descended to arrange the precise time. 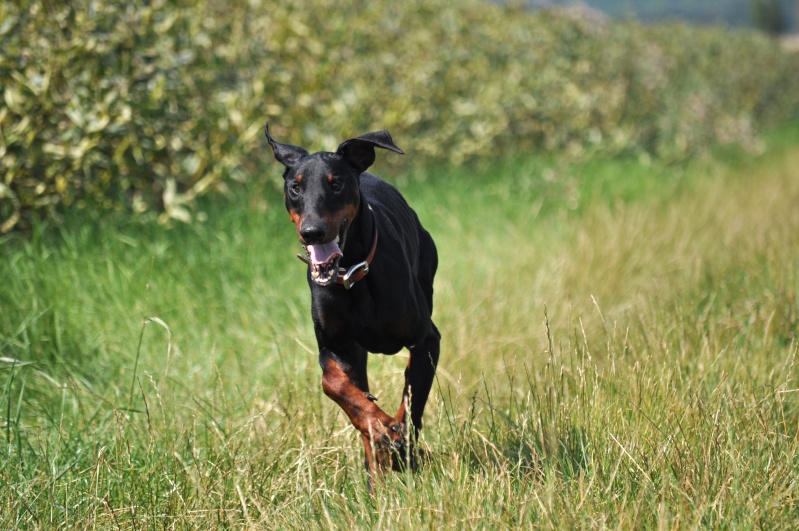 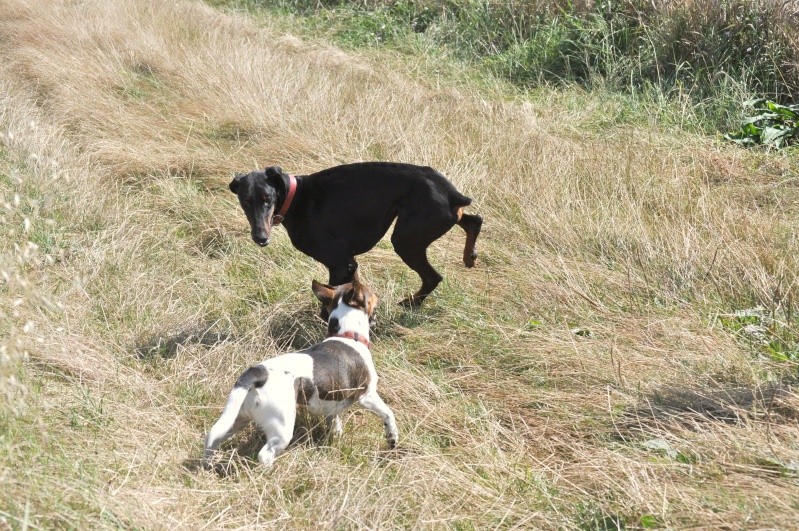 Playing
I arose at 5 and shortly, as I was rearranging the car, Thierry arrived with Eros, he had slept on the couch in their room and there had been no disturbance during the night. I wondered if they were regretting their decision in view of this but, if so, he didn’t show it. At 5.45 all three of us were off again, but only for half an hour, to that routier for coffee. The same one earmarked for my overnight stay. It didn’t help to see the menu board from the night before, still there on the wall, mocking me with its display of delights missed. I had no criticism of my hosts of the night before but a teetotal household was not something I had bargained for!

Dobies have cast iron bladders, so much so that when they do empty them, the operation is so protracted, several minutes, that they don’t even lift a leg sometimes. They don’t squat but sort of rock forwards which leaves the hind legs well clear. Unfortunately with a healthy specimen the force of discharge is such that the front legs don’t always fare so well. I mention this to explain how Eros, obviously disturbed by his recent experience, refused point blank to leave the safety of his cage until the end of our journey when he again saw a familiar face. And it was a long journey too, longer than yesterday’s, for instead of a text I got a phone call from Virginie to ask if I could take Eros home with me and Jean-Luc would collect him in the evening from there. No problem for me or for Eros because he already knew and trusted Roady and if his stay was to be brief he didn’t need to meet Ramona and Sami. Like Heidi, Ramona can be a bit full on with newcomers, but without the barking, and Sami, well he would just have to be in a different place. As it turned out it wasn’t necessary, Jean-Luc couldn’t make it, so could I take Eros all the way to Bordeaux, and how much would the extra be? I could of course and between us Virginie and I worked out a rough figure. She would check with Mary and I would work out exactly what time I could be there.

Fortunately she caught me near to Gueret, before I reached the A20, where I would have turned south. Thus the journey was a little shorter and less costly. I could carry straight over the motorway and travel the old truck route, they are diverted these days, via Bellac, and Confolens to Angoulême. This had the added advantage for me of passing what are probably 2 of the cheapest refuelling points anywhere, Confolens and La Rochefoucauld, and I wished I had twin tanks to take full advantage. Confolens it was though, the station is closer to the main road there and there is a convenient rest area where I could eat my lunch and the dogs could wander and stretch their legs. Except that Eros was in no mood to alight, and I didn’t force him. It wasn’t till we got to Bordeaux, 11 hours after leaving the village, that he jumped out at the sight of his beloved Virginie and then, after loads of fuss and kisses, allowed himself what appeared to be the longest pee in history. No sooner was that out of the way that Jean-Luc drove up and his joy was complete.

Despite the usual invite to come inside for a drink I declined and Roady and I were soon on the road again. Although I would normally welcome an overnight stop at Bordeaux, one of my favourite restos is there, it was only 5pm and I didn’t fancy hanging about in a bar for 2 and a half hours waiting to be fed. Besides which, leaving now, I could be home before 8 so the die was cast. At 10 minutes to the hour we rolled into the drive after a very long and, for me unaccustomed, day. 14 and a half hours on the road. Normally these days I limit myself to 10, quite enough for an old chap never mind what I was used to when working.

And Eros? He is happy back where he is loved, but still waiting for his forever home.

This day alone over 900 kms