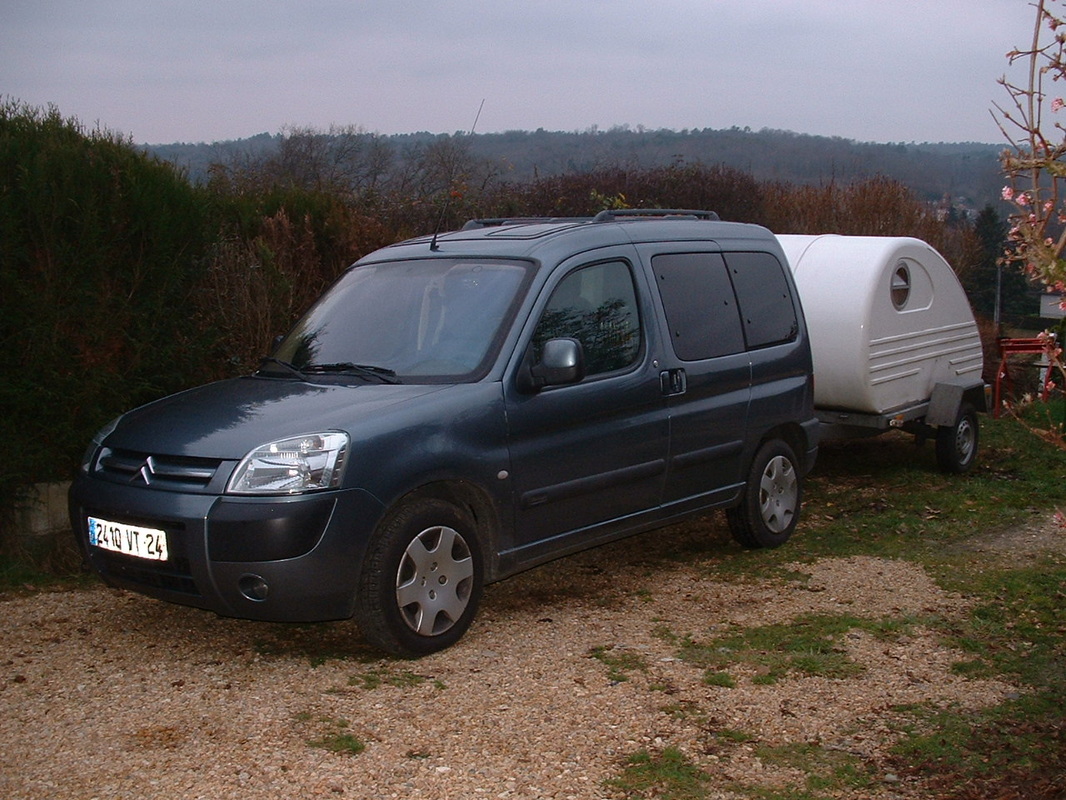 Berlingo and Teardrop Sleeper, on new chassis
Feather to Oz, and Thot to Angoulême

Sounds like my longest trip yet, Vergt in the Dordogne to Perth Western Australia, but in fact Feather and I were having a little bit of help by a couple of airliners along the way.

Feather is a lovely and very cuddlesome English Setter who has been looked after by the founders of the Phoenix Association for several years while their daughter established herself as a vet in Perth. At last the time had come and gentle Feather was about to embark on the journey of her lifetime. 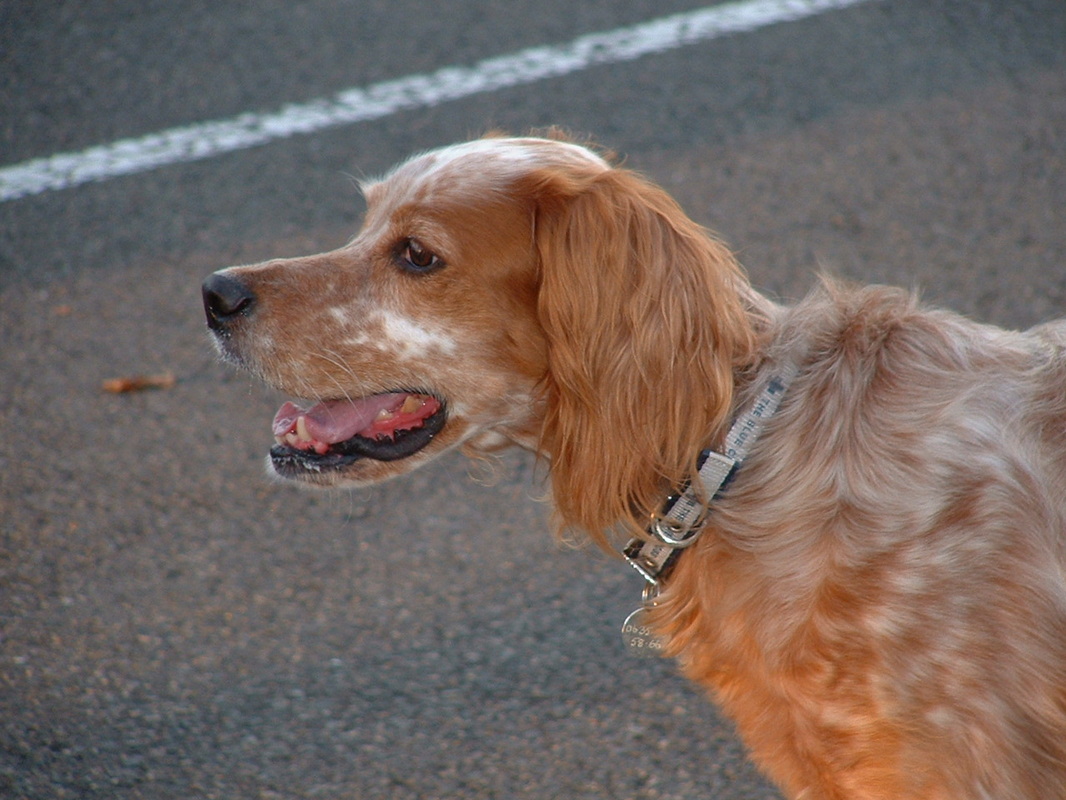 I got away on time and arrived at Vergt early to find Sheelagh just arriving herself from somewhere and explaining that there was an airline crate for Feather to travel in. It did fit crosswise in the car towards the front enabling me to open the cage door each time I wanted to bring her out of the side door. Rik arrived and they were both very worried that she would slip by me and run off. I tried to re-assure them and, in the event, was proved right, she was no trouble on the trip and I was at no time worried myself.

We left at ten past one and, after re-fuelling at Boulazac, started up the road towards Chateau Gaillard, about 50 kms south of Paris, with one stop at a pleasant, open, aire on the way. Feather was lovely on the lunge, after running manically about for a few minutes she settled to sit by my knee as I ate a short lunch at a bench and table.

On our way again we arrived at our destination shortly after 6 and I took the advice of the parking assistant to place the car in the shade of a lorry he said was leaving at 4 in the morning. This suited me because I was due to book in at Charles de Gaulle Air Cargo but wanted to make absolutely sure of being on time with much to spare. A puncture or some hold up on the road could cause Feather to miss her plane and that would be unthinkable with the subsequent re-booking and untold extra cost. I reckoned that the journey round the N 104 would take me a couple of hours or so in the early hours but set my sights on a 4am departure, just in case. I walked Feather after a drink of water on a piece of rough ground nearby allowing as much freedom as possible and she rewarded by doing all her business in the process.

I ate in the resto and gave her a short walk before settling us both down to bed for the night. I went to sleep at 9 but was awoken at 11 by the sound of barking from the car. I had to get out and bring her to the caravan, we were closely parked amongst other cabs and I didn’t want drivers banging on my door in protest. 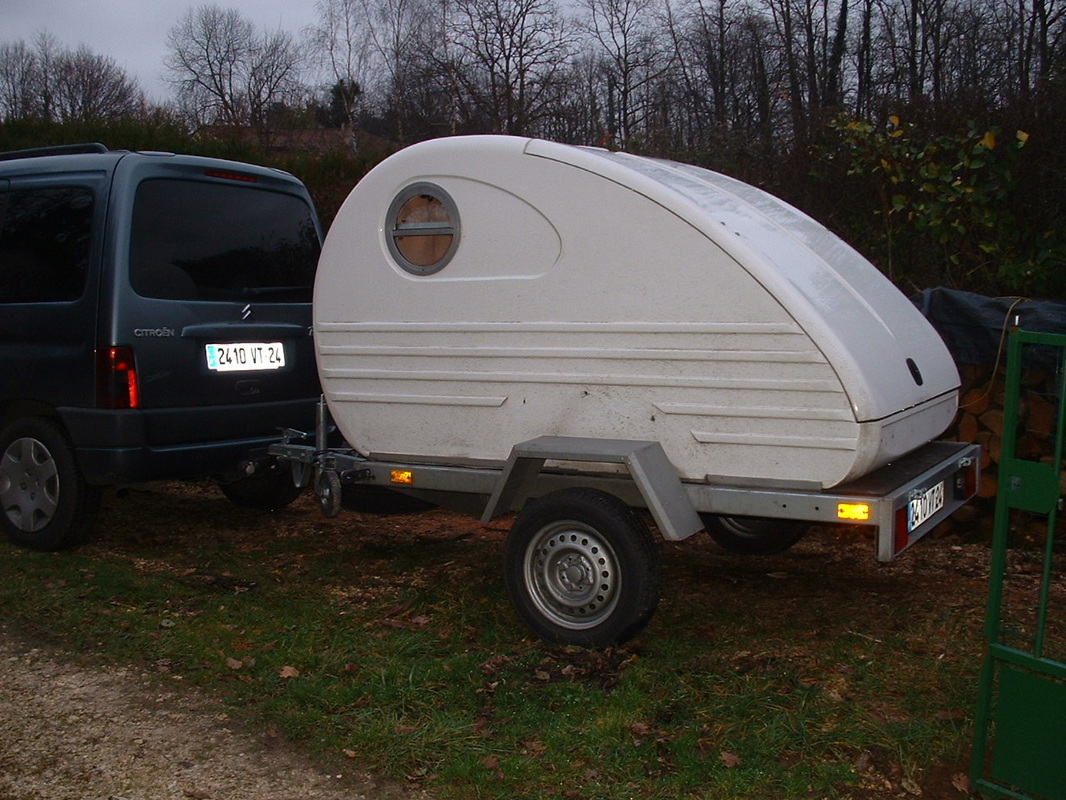 A bit of a help needed for the higher rear opening door on the new trailer chassis
She fidgeted for a while but then settled down and we slept till the alarm at 3am.

At the alarm I was up and out for a brief walk with Feather before going into the bar for coffee and ablutions. I was parked behind a wagon due to leave at 4 but at 4.15 the Belgian driver was still in bed. When the vehicle next to him moved off I tried to squeeze through the gap left to the one behind it but it wasn’t possible. Finally, and reluctantly, I banged on the driver’s door and he rose and, without rancour, moved his wagon forward a metre to let me out. He was probably pleased that I had curtailed his over-sleeping.

The road to CDG was trouble free and swift and I arrived over an hour early at 6.15. There was someone there who said he would return in half an hour and 2 hours later all was completed and, well walked and photographed, Feather was finally loaded onto a van to travel to the holding warehouse. 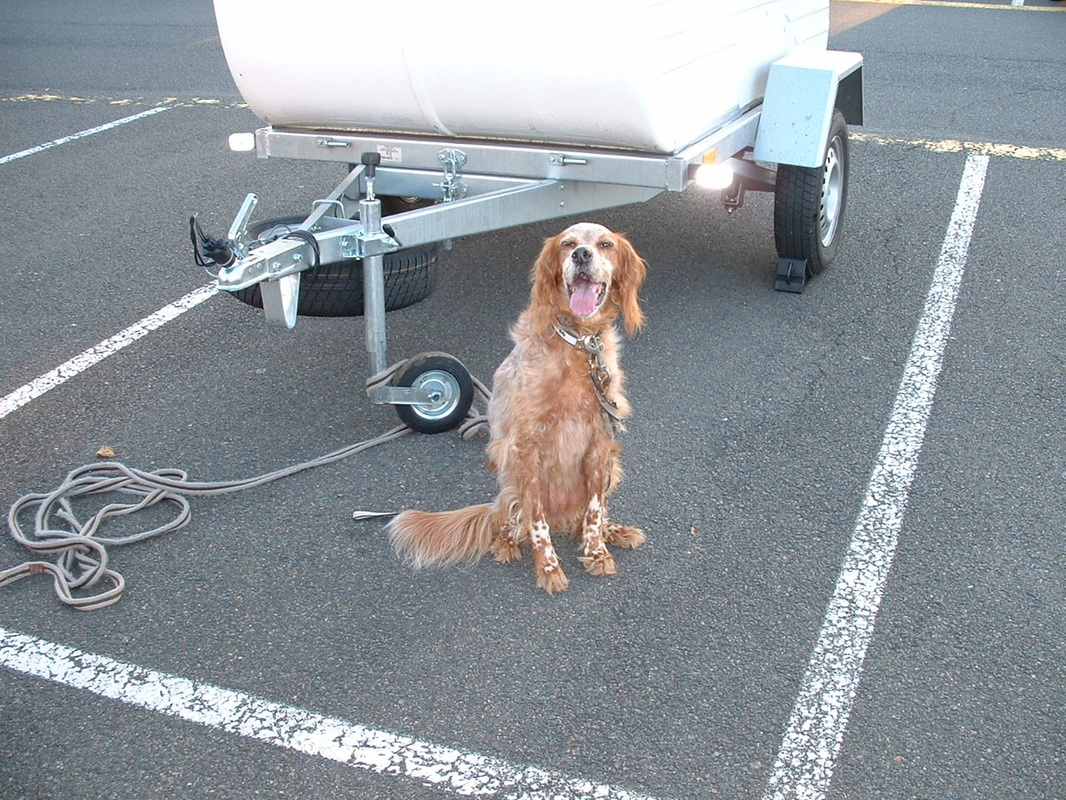 She had several personal comforters to calm her during the journey, she loves human contact and would get none now for a long time, apart from the staff visits to refill the water feeder which I had, under instruction, fitted securely to the bars of her cage. I was asked by the handler if she was ‘mechant’ or friendly and, for explanation I pointed to, and translated, the little note stuck to the box which read in English ‘Feather loves everyone’.

I was released from my duty as she was whisked away and turned my attention to the road eastwards to collect my next charge in the Vosges. After an hour my heart was in my mouth as I got a phone call from the forwarding company to say that all was well with Feather’s vet inspection and she was fit to travel. I at first thought that I was being recalled.

The fine weather and the arrow-straight N4 on which I was travelling made for pleasant driving but the lack of time in preparation for this route showed when I realised that I should have by-passed Troyes and be heading for Chaumont. What I had thought was an entry to Troyes from its by-pass was obviously the turn off from the N4 to the town, and the route I should have taken. The diversion however may have been quicker, certainly not slower although some 30 kms further, because I arrived in the village destination 45 minutes earlier than expected.

I found the house easily and was confronted by a constantly barking Podenco who turned out to be my passenger, not a good omen for the journey or the overnight stop. Soon, the paperwork completed, he was loaded and, immediately calm, We were on our way. 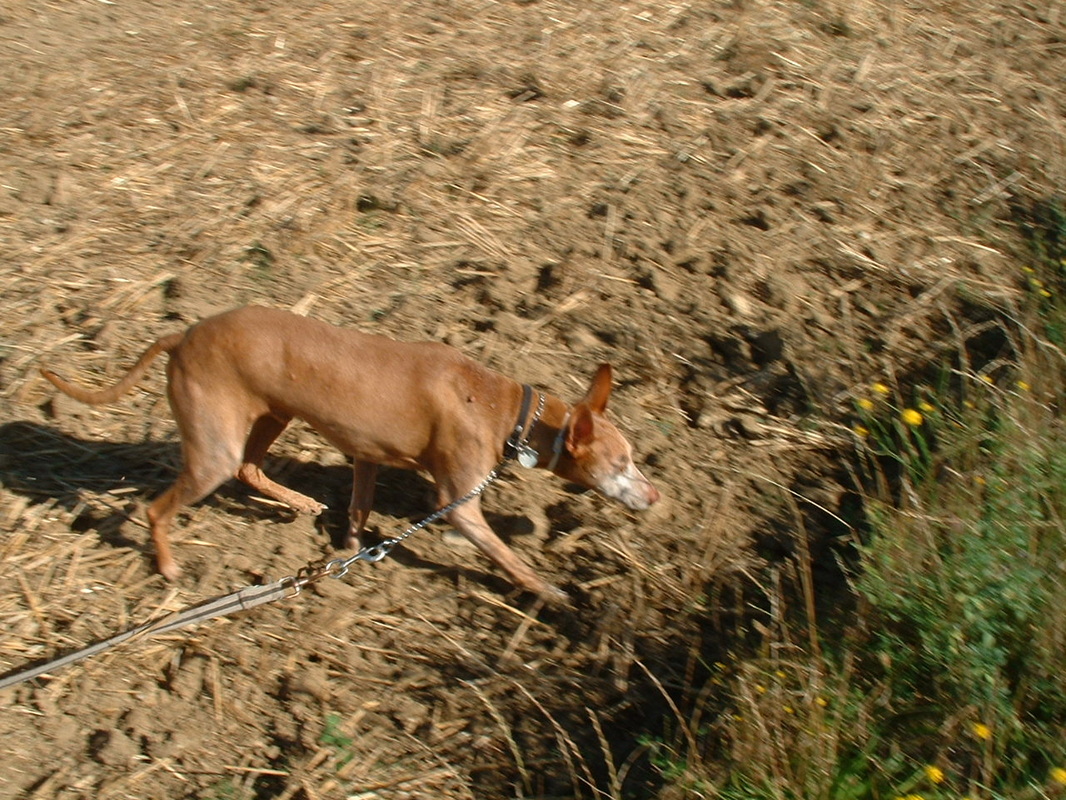 I felt good and not tired at all after my early start and soon made calculations which suggested I could complete 2 goals. Firstly to refuel at Chalons sur Saone where it is very cheap, and secondly to reach the Centre Routier at Moulins where the eating is very good and the positioning of it a good starting point for my very long day tomorrow to Capbreton and back some way north. I had been booked to go right down to the Spanish border to collect a dog for Paris, after dropping off Thot in the Dordogne for his handover to his new owner for the last lap to Angouleme. Things were to change but I didn’t know that then. Both objectives were achieved and I ate very well before bedding down in the car park.

Previously I had given Thot much walking on the lunge, he is very nervous and fearful, and will only leave the vehicle if I am further than a lead length away from him. The same with eating and drinking. Water and croquettes (given for Feather but forbidden by the airport carriers) he likewise took only when left alone to do so.

Despite all the noise at my arrival at his previous home he made not a sound on the whole journey and during the night. I phoned his adopter, Madame Beaumont, to ask if she could meet me at 10 at the rendezvous near to my home instead of the previously agreed afternoon, and she was pleased to do so. This will give me a flying start for the long journey to Capbreton and beyond.

I awoke to the alarm at 4 and, after a quick walk round for both of us, we were off 20 minutes later. We made very good time and I arrived back home at 10 minutes to 8. The urgency of my return became somewhat irrelevant when, on going through my emails, I found a message from Maryvonne cancelling the Capbreton to Paris transfer of Dess. This is because the adopters in Dunkerque had changed their minds and adopted another dog. I was sorry for the dog and the family who needed to find him a home but was not disappointed for myself. It has been a hard week and I was not looking forward to another couple of thousand kms which included a 2nd trip to Paris.

I took Thot down to the cemetery to meet his new owner, her husband and grandson and, after persuading him out as usual with the lunge and a little walk around on the field opposite with a few photos, he was off in their little car to his new home. 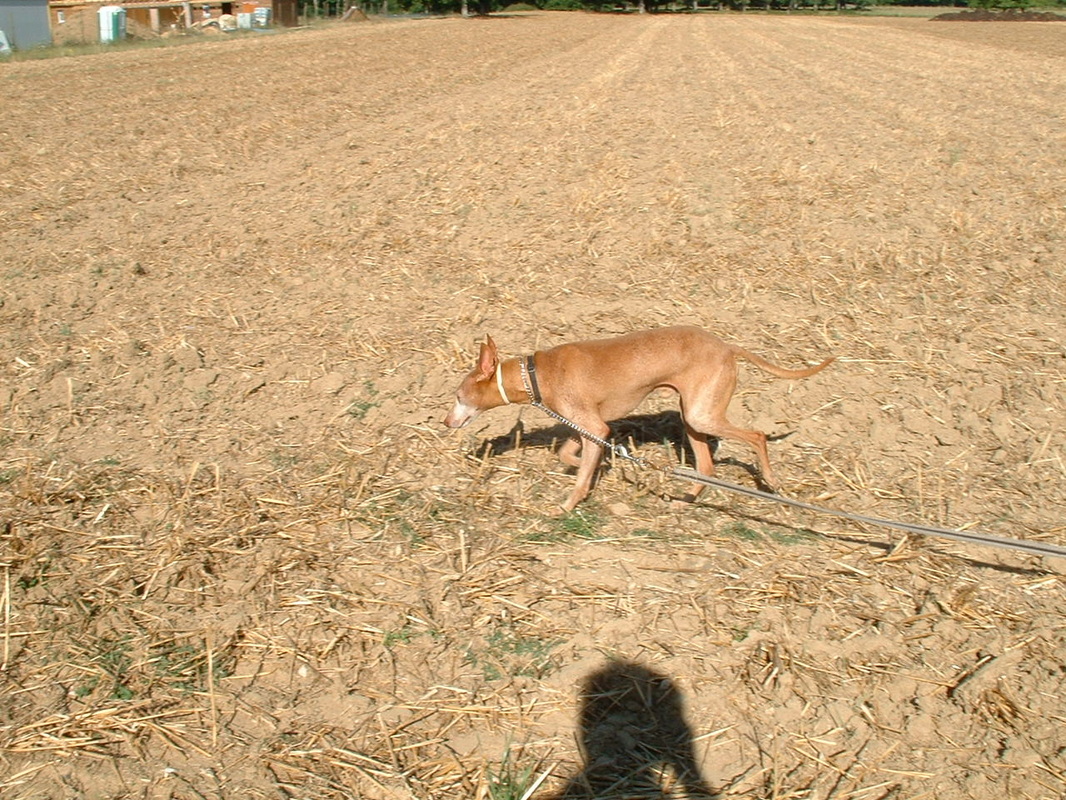 I hope Thot has found permanence in his new home, I don’t know, but I do know that Feather reached Perth safely after her long double flight and, on being released from her travelling crate, flew into the arms of the first human she saw. I did say she liked human contact.