Just a little run, not far, not long. Two cats from Issac, near Périgueux, to the Charente. Five hours from home to home, maximum. How wrong I was and how appropriate the use of the word ‘maximum’ was to become.

At the behest of Phoenix I turned up at Lynda and Trevor’s house as planned at 10.30 and waited while Lynda sorted my two charges for the day, Patti and Hogan. It took a while because one of them, I can’t remember which, was a little nervous and not keen to go. But that didn’t matter, there was plenty to chat about and I was in no rush.

As we finally got the last one on board my phone rang, it was Maryanne, my contact at one of the French rescue organisations. She wanted to know if I was available to collect an Alsatian from Bergerac and, did I know a pension near to where I lived where he could be taken. Somewhat mystified I said yes, I’m sure Sharon near Nontron would have space but I would ring to make sure. That was fine, she would get back to me with the details in a text as I would be on the road by then.

Then we were off, almost due north on the D roads, across the Isle at Mussidan, then up through Riberac, and Vertillac to Angoulême. There I turned west along the so-called Rocade de l’Est to the N10. I tried the slightly shorter genuinely eastern by-pass when it first opened but found the surfeit of roundabouts tiring and not worth the saving. By contrast driving to the south of the city is easy going and it is not long before the open road of the N10 is reached. Dual carriageway then all the way to my destination, a small village just before Ruffec. My phone signalled an incoming text just before the turn-off but I thought that this close there was no point in stopping. Dee was waiting at the gate to indicate the house and opened the gate as I read my message. Maximo had been delivered to a French family in a small hamlet to the east of Bergerac from Spain, from where he had been rescued, on Saturday evening, two days before. Maryanne accepted the cost of transport and boarding and wanted to know when I could collect him.

I waited till I was inside before replying, first there was the more pressing business of introducing Dee to her new pets and them to her and, of course, the resident dog and cat,  Jack and Misty. No problems there though Dee and husband Mike wisely controlled the situation bearing in mind the nervousness of at least one of the new arrivals. 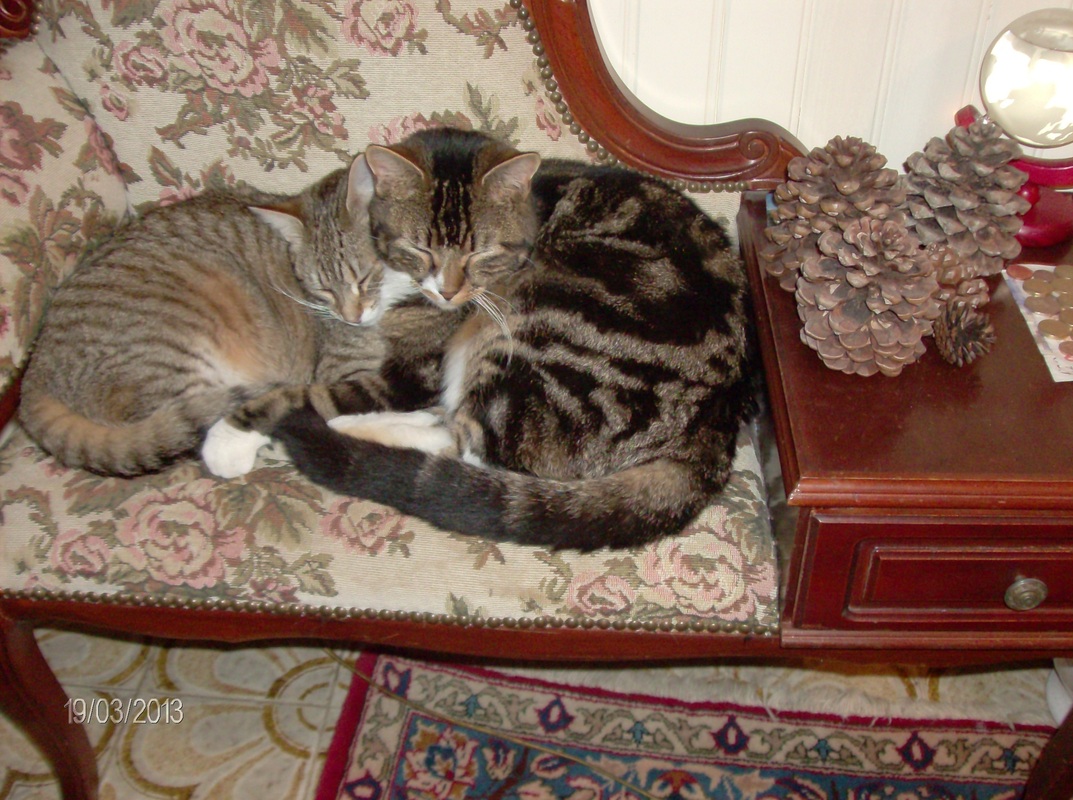 Patti and Hogan, making themselves at home
Then back to the business of Maximo. Dee had given me a generous slice of her delicious home made ginger cake, and later a parting gift of the whole cake, gratefully received, and while I munched on that and drank a cup of tea I phoned Maryanne. I told her that I could do the transfer this evening if necessary but, as it was a two hour trip down there and not much less back and already 2.30pm, I would prefer to do it tomorrow morning. Maryanne was fearful for Maximo though. She said that these people had alleged that he was uncontrollable and ‘mèchant’ and were threatening to dump him at the SPA to be killed if someone didn’t come today. Of course, I relented and, after a call to Fran to warn her, and through her, Sharon, of my impending late evening, I set off back down the road.

This time I headed for Périgueux. The commune of Calès is much closer to Le Buisson de Cadouin than it is to Bergerac and this was the quickest way. All I had was a ‘Lieu Dit’ address, not even a name for the people concerned, but, after asking a couple of locals for the hamlet I cruised slowly down what appeared to be the main thoroughfare until I saw a large Alsatian lying down underneath the tree to which he was tethered. I tuned the car when I saw a woman emerge from the house and gesture to someone else within. This was obviously the place. The dog barked as I approached but otherwise made no visible sign of aggression. The couple, in answer to my question, assured me that the dog was fierce and that he had already bitten the husband. They stood back as I approached him with my lunge rein in hand. I wore my thick gauntlets as a precaution and gently stroked his luxuriously thick mane as I clipped the lunge to the choke chain he was wearing. He was calm as I then gently led him towards the open rear door of the car but he was not too keen on entering the cage. ‘No problem’, I murmured, ‘take your time, you’re to big to be lifted and anyway, if the man’s bloodstained hand and the woman’s repeated ‘attentions’ are anything to go by, I’m the last one who is going to grab you.’ 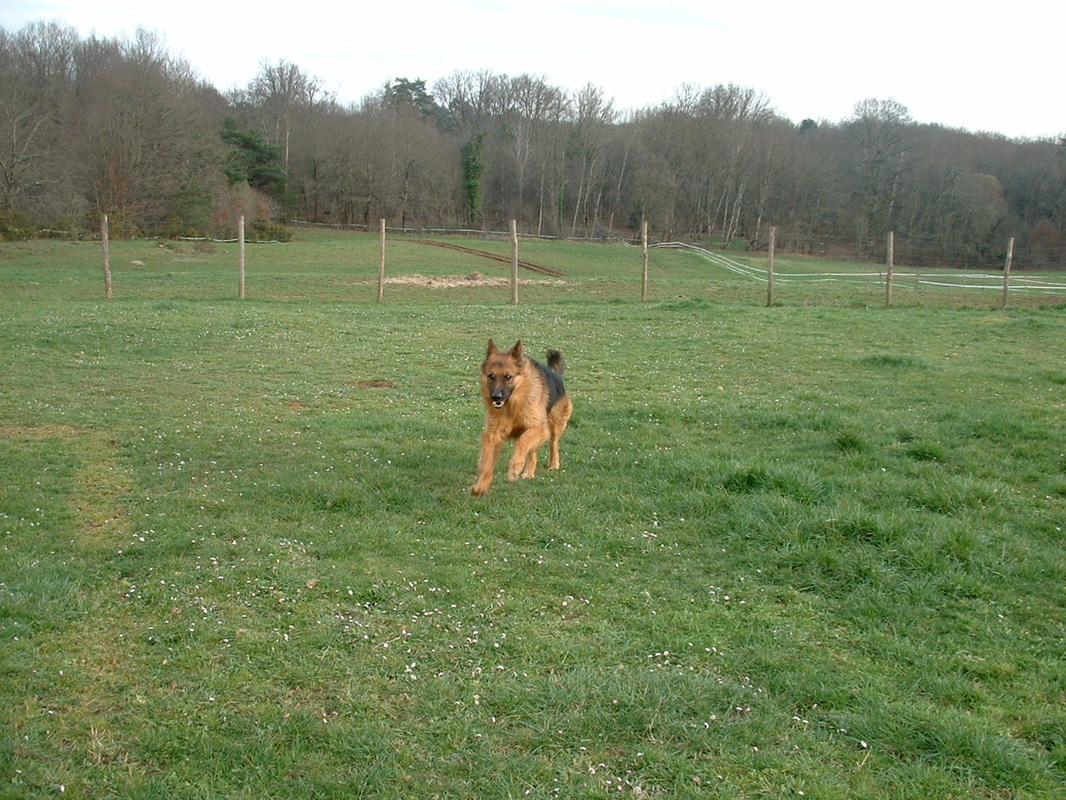 I opened the side door of the car and passed the end of the lunge through the back of the cage and out of it to the man of the house to hold. He took up the slack and was about to try to pull the dog on board. I stopped him from doing that. They then decided that they would like their choke chain back and produced a very up market red harness, easy to fit with a clip each side, which had accompanied him from Spain. Unfortunately in their fear they clipped it in front of his legs rather than behind them, useless like that but, before I could stop them they had unclipped and removed the choke and clipped the harness. Fortunately Maximo showed no signs of wanting to escape and stood still till the harness was correctly positioned. Then with a little patting of the interior for encouragement and the sight of the friendly face of my constant companion over several weeks, Roady, in the front cage, Maximo jumped inside. A brief touching of noses through the bars with his new friend and he settled down quite happily as I closed and secured the door. Although his demeanour so far had been anything but vicious I decided to leave the lunge attached and in place for the journey. Mainly to make unloading in the dark at Sharon’s safer but also just in case he objected to my putting my hands into his new ‘space’ to unclip the rein. 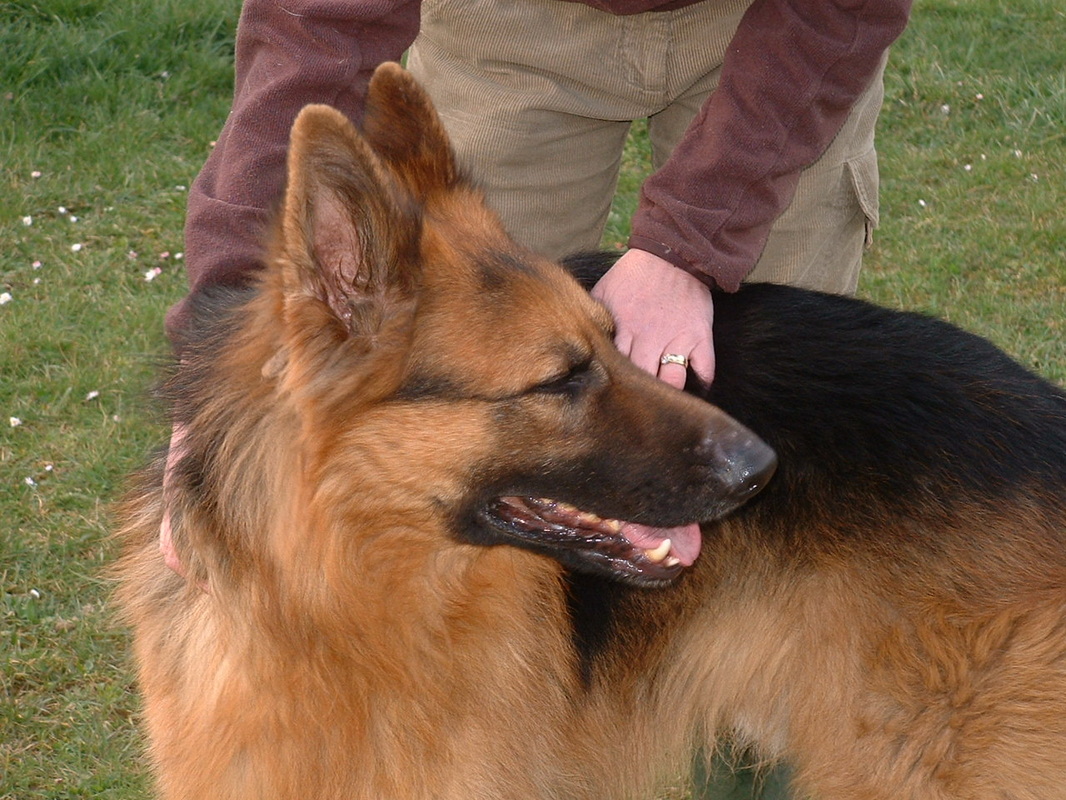 Papers transferred and we were on our way, retracing our route north to Nontron arriving at Sharon’s, pre-warned by Fran, at 7.30pm. A brief resumé of the circumstances and we opened both doors to allow him to jump out and through the gate into the large compound surrounding the kennels. Sharon took hold of the lunge as he passed and followed him with me inside. We allowed him to wander around the strange terrain with all the freedom that 10 metres will allow. He was fine, no aggression, no problems, and when the time came for him to be put inside his spacious kennel he went in without protest and waited for the lunge to be reclaimed.