Roady, a cheeky chappie, abandonned on a busy road and looking for a home
Roady from Limoux

Roady was discovered by me on the road from Limoux to Castelnaudary. I scooped him up in the nick of time and into the car. I had delivered a large Dobermann from the Nord Departement and, for once with plenty of time to spare, was looking forward to a leisurely drive as far as Montauban where I was to spend the night.

Several asked-for directions brought me to the local vet in the city and the doctor checked him for a chip. Nothing. No collar and no tattoo either, so I set off at their suggestion for the refuge after giving them all my own coordonnées.

After a short delay on a country lane to make sure that a young woman who had just destroyed her car by bouncing first off, then on, then off the other side of the road before finally bouncing back on and half blocking it, was ok and that there was more competent help at hand, we arrived at the refuge. It was closed despite a sign saying that this was still within opening hours. Another sign said that it was closed for the weekend but gave a number to call. The number was that of the vets from where I had just come! After we sorted out the confusion it was agreed that the only thing I could do was take the little man home to the Dordogne. 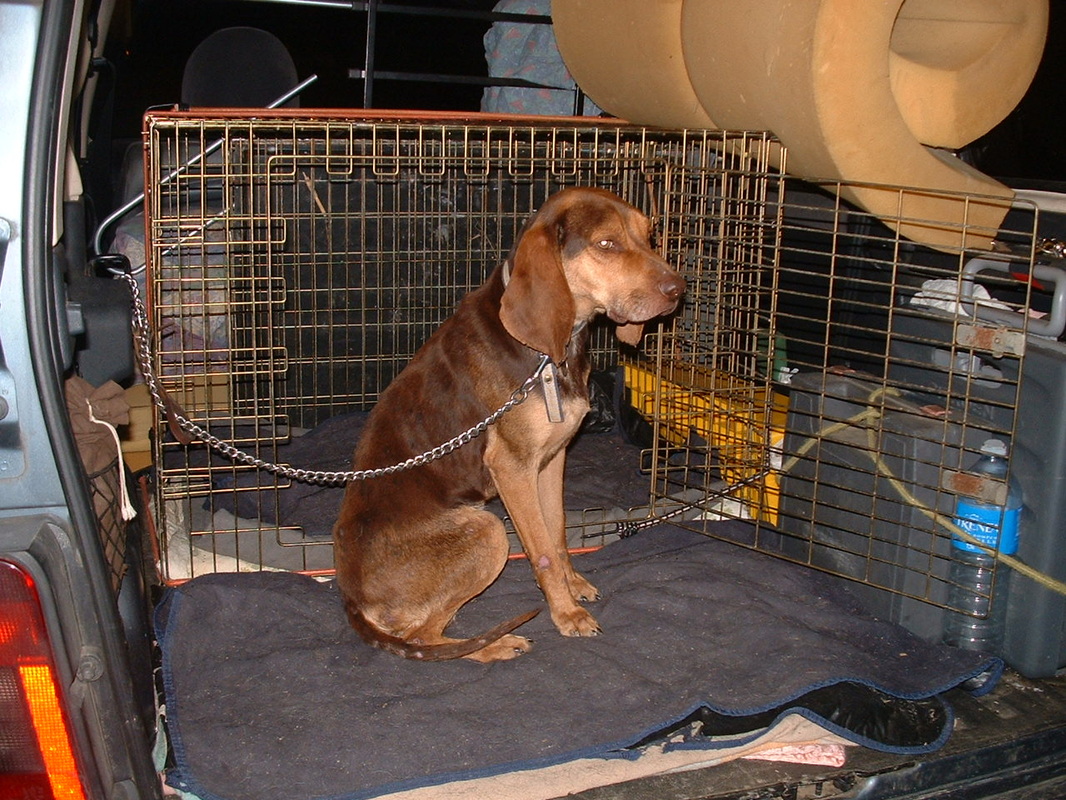 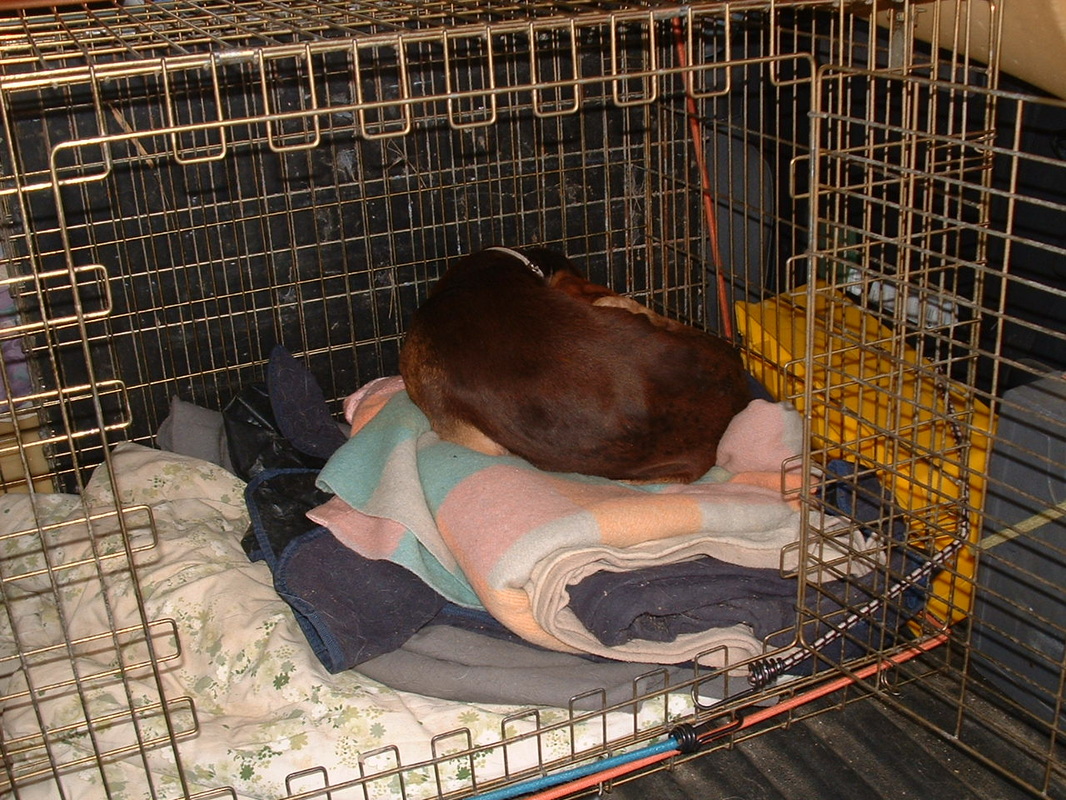 The little ball that you see above was how he travelled all the way in the cage and, when we settled down for the night after the interior of the car had been transformed into my sleeping compartment, how he remained for 8 hours snuggled up next to me.

Back home he is proving a little character. He soon made friends with Ramona and Sami 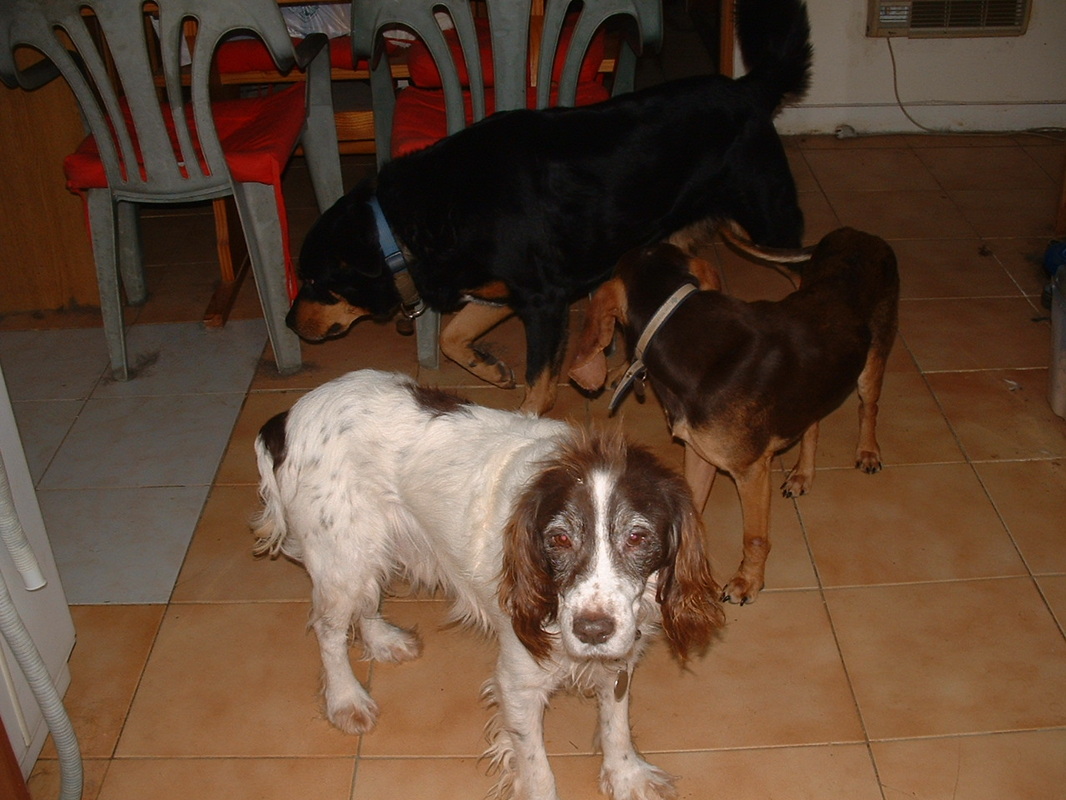 and was not put off by the former's sergeant-major assumed role of shouting at him if he put a foot wrong. We all had a peaceful night after he willingly walked into the extra large cage I keep for transient visitors and settled onto the generous amount of soft blankets within. 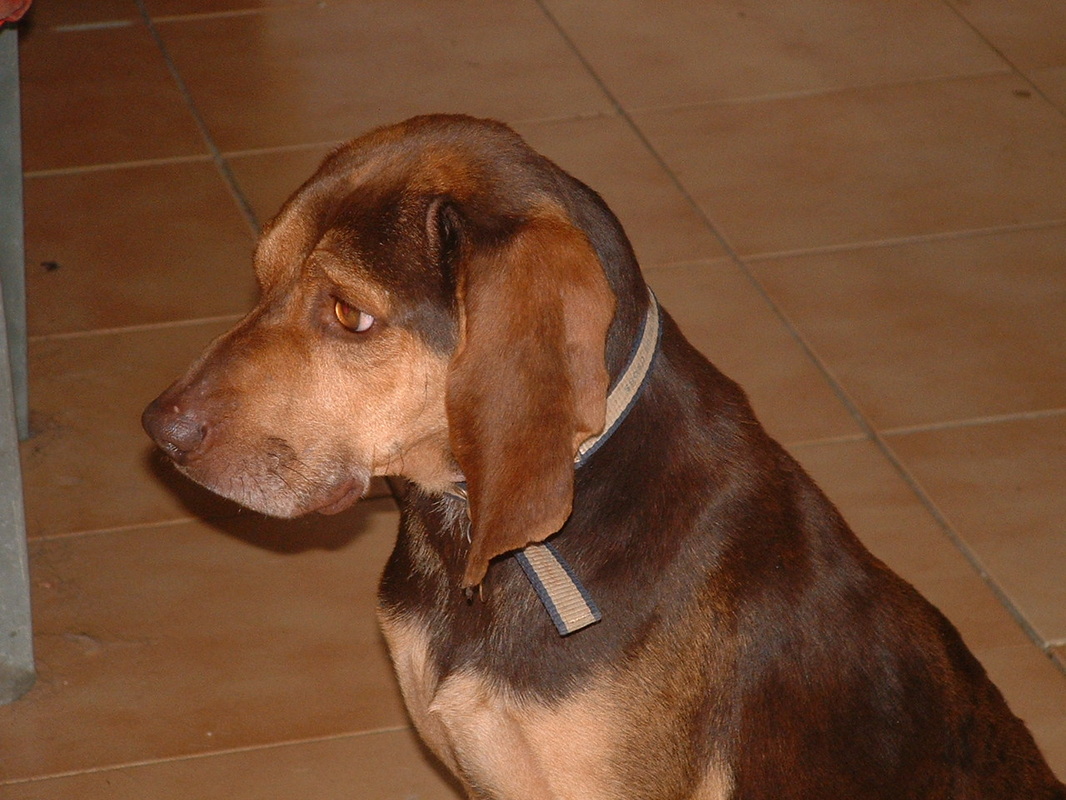 He is thought to be a Bruno de Jura chien de chasse and probably 14 months or so old. He has scars on his back and lesions elsewhere on his legs. A visit to my vet confirmed that he does not have leishmaniosis.

Well, after more than a week and no hint of an owner at all for Roady it was time to think of a new home for him.

Obviously there will be no rehoming fee as such, but I would like to recuperate the money we will have spent on him at the vet. So far that has come to €237 although the most important thing is to find him a good home.

He is very quiet and spends a lot of time curled up sleeping. Sami, with whom he initially made friends has taken a dislike to him (reverting to his known antagonism towards other males) and we now have a careful juggling act to perform each time one or the other needs to go outside. 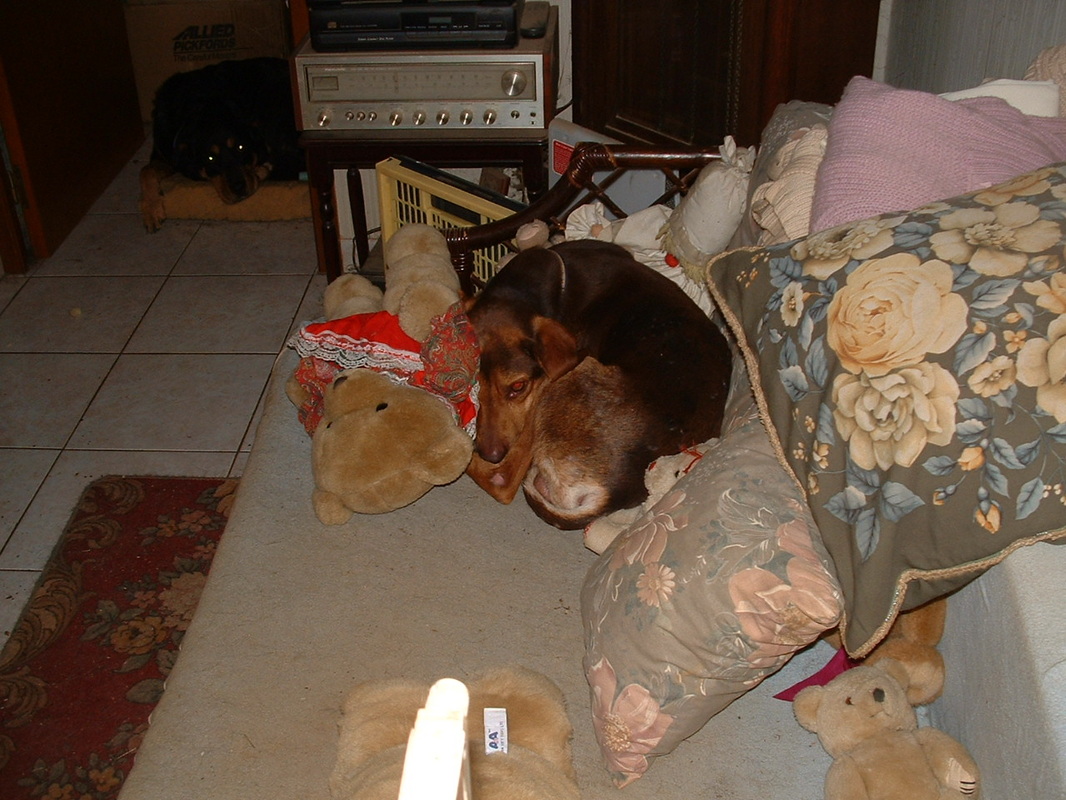 He is learning to recall to the whistle and his name although still on the 8 metre lunge in the field. He sits for his food and has now mastered waiting until told to go ahead. There have been a couple of accidents, mainly not his fault but due to necessary delays while Sami is cleared from the area, but otherwise he is clean in the house and goes all night in silence and with no problems. 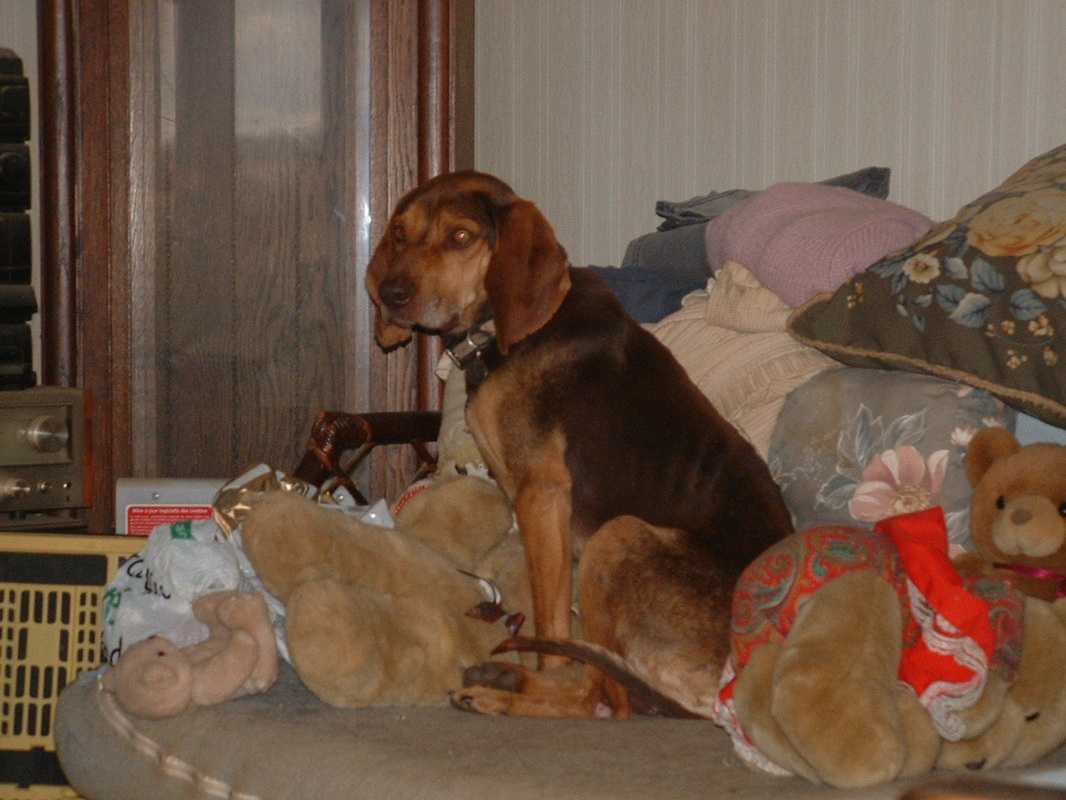 He likes his cuddles and gets on fine with Ramona, and would do with Sami if allowed to. His size can be judged by the pictures I first published next to the cage in the car which is just under 70cms in height. He weighs in at 14.2 kgs. I'm pretty sure he is a cross as his legs seem a little longer than some I have seen and he does not appear to be developing the Bloodhound-like characteristics of heavy jowls and wrinkly skin. 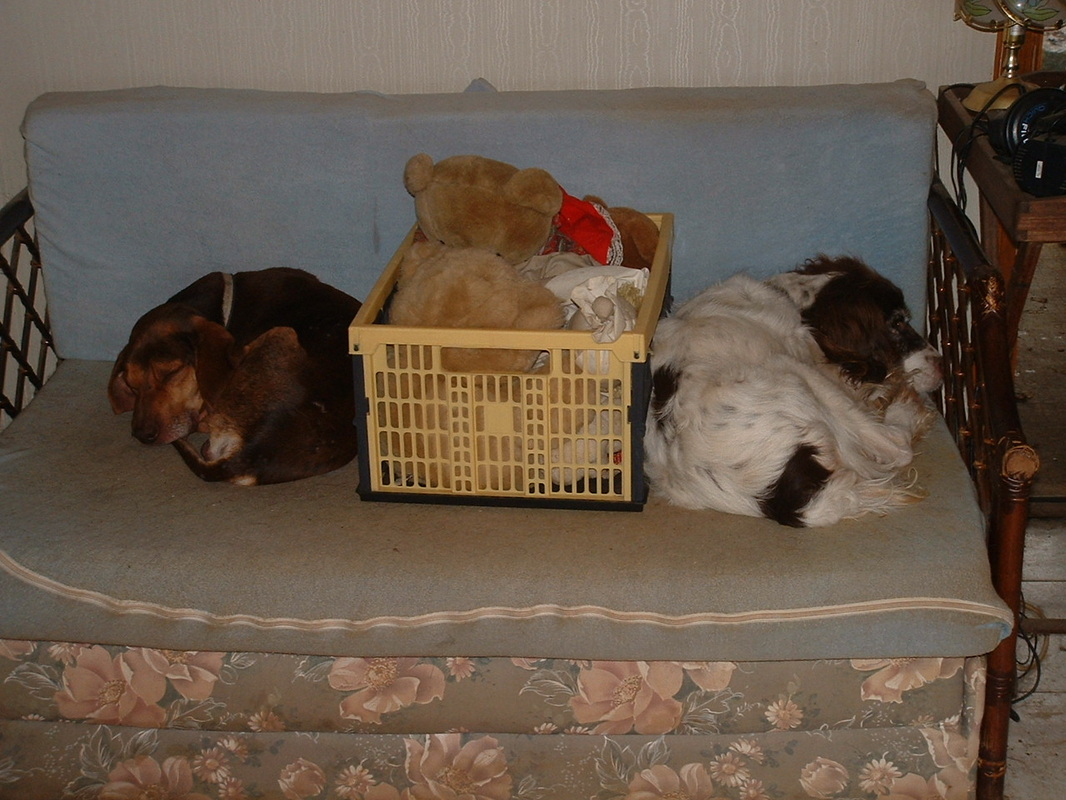 An uneasy truce, a compromise? Whichever, it is a victory of sorts, but vigilance is our watchword and the squirter bottle is never far from hand.

In our short acquaintance he seems to be calm and well behaved but does still need a firm hand regarding where it is, and is not, permissible to go.

Now castrated, vaccinated (including rabies) and chipped he is ready for a new home. He is now able to travel anywhere in Europe with his brand new passport.

Here are a few more photos of Roady proving he can get on with any dogs who will let him. Because of the problems with Sami he travels with me everywhere on my dog delivery journeys. 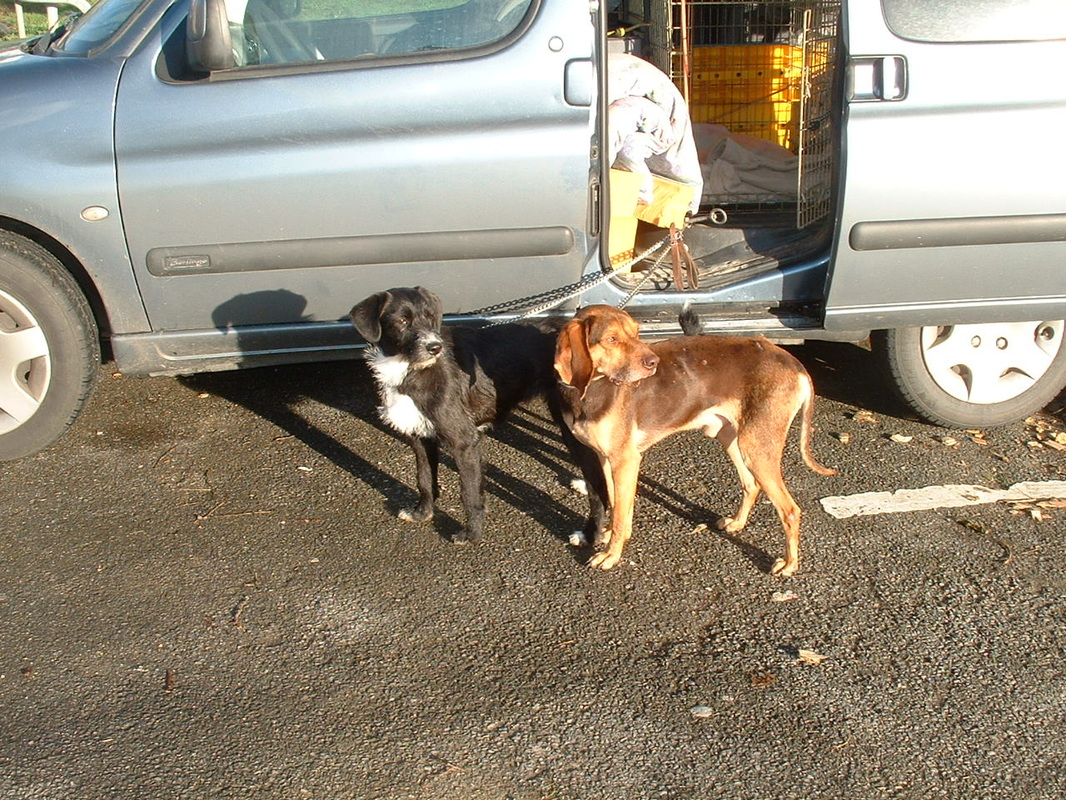 A break in a long journey with Christelle, we all slept together too 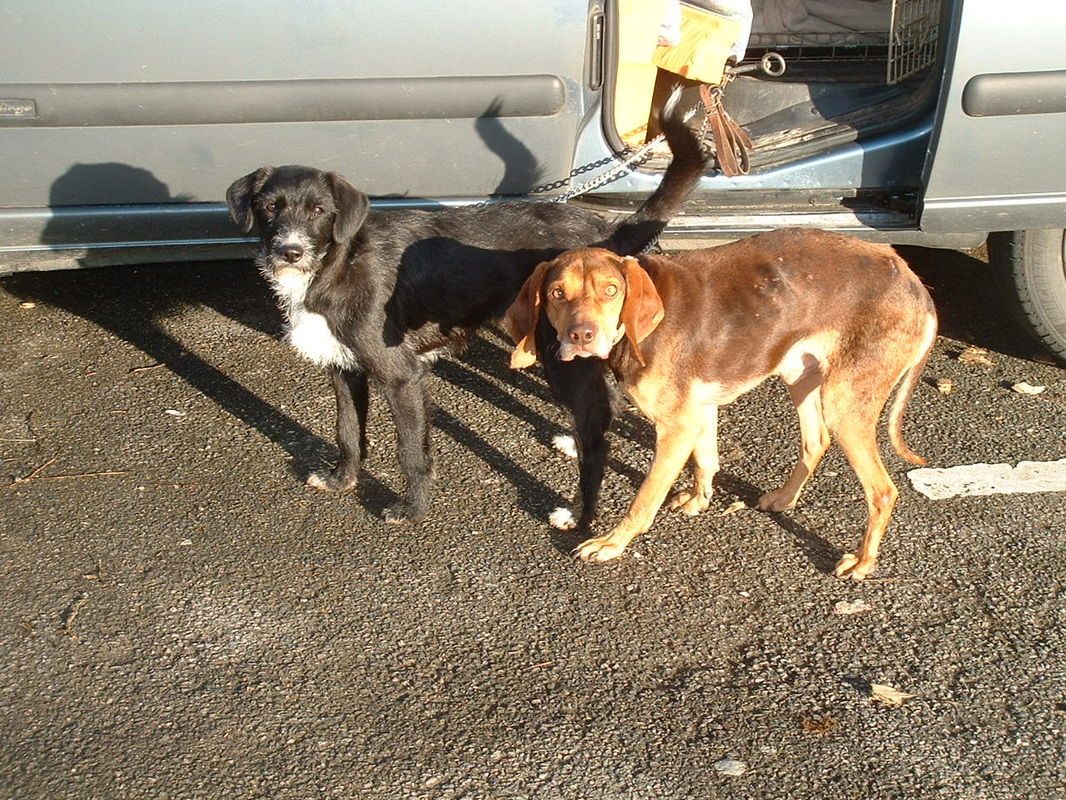 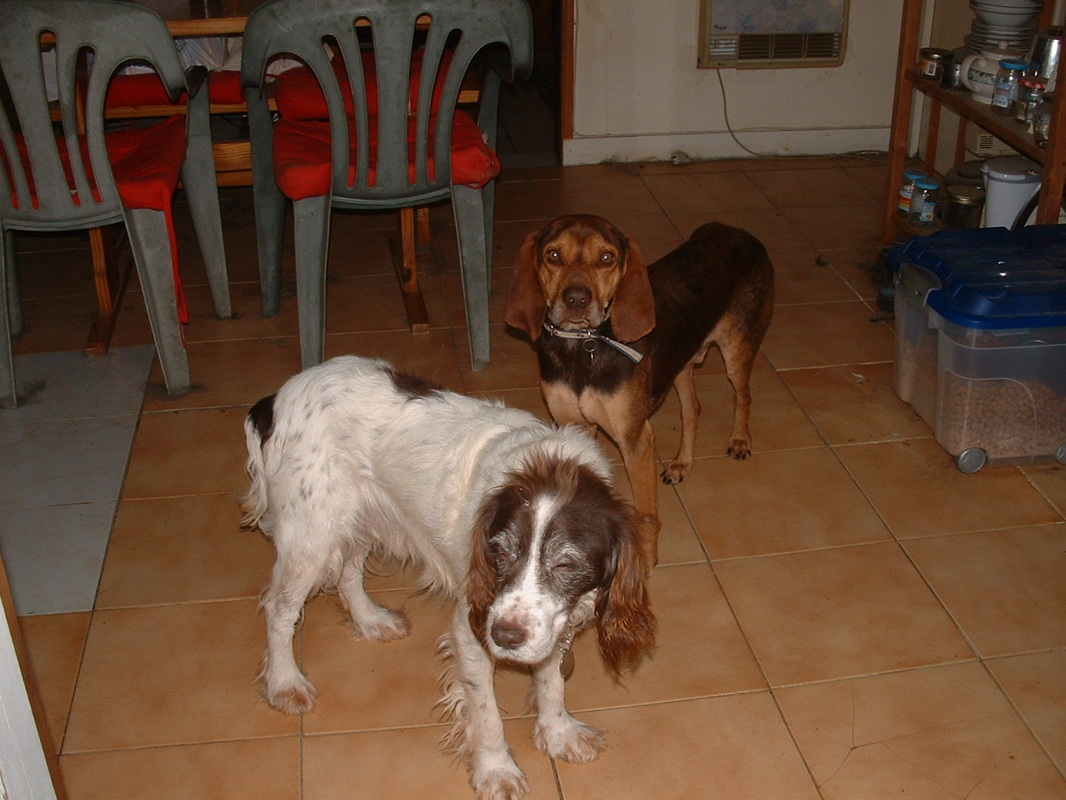 A happier moment with Sami, soon after first meeting 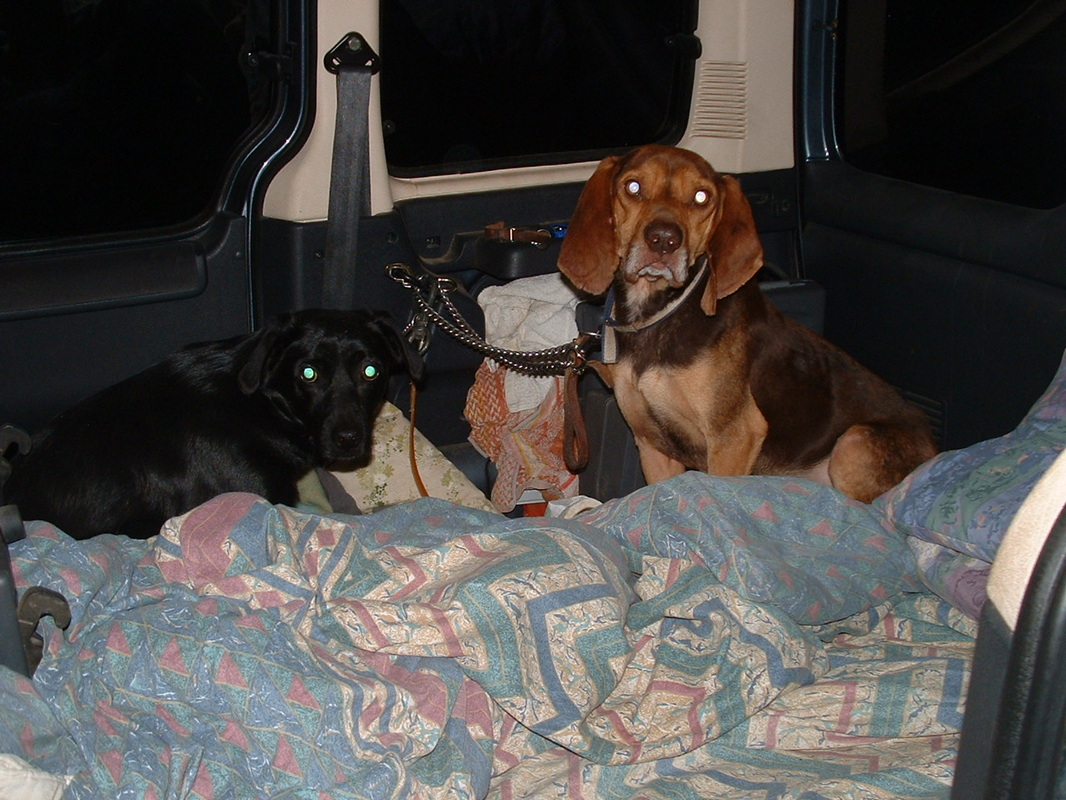 Ready for bed with Blacky. They travelled all the way from Beziers to Valenciennes together. 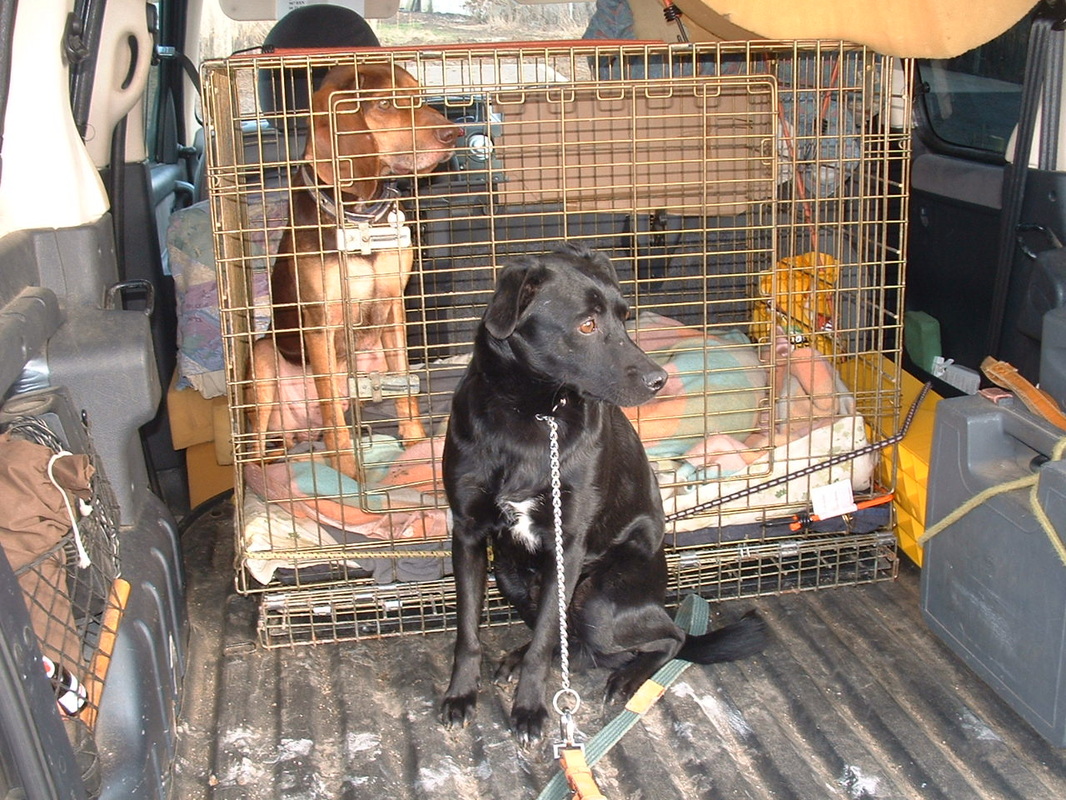 A break in a long journey. Blacky was nervous and a known escaper so I walked them seperately. 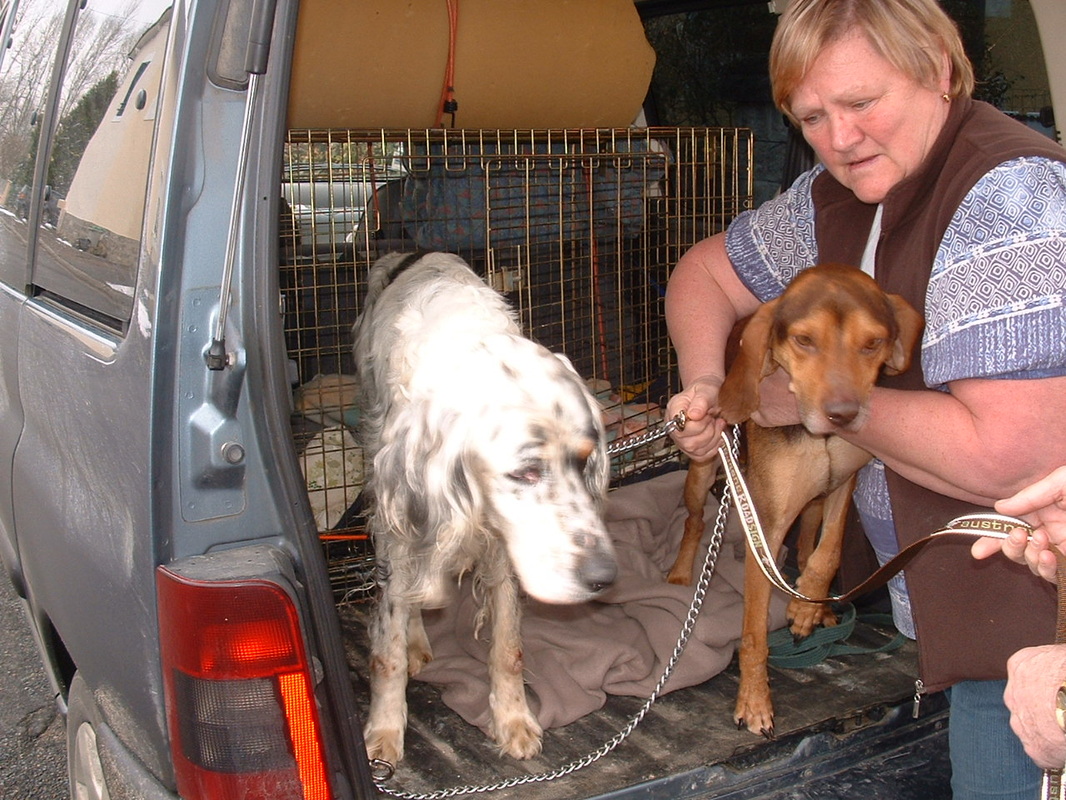 With Usky, the Setter from Bergerac SPA. They didn't share the cage because Usky was a little too large, but they were friends for a short time nonetheless....... 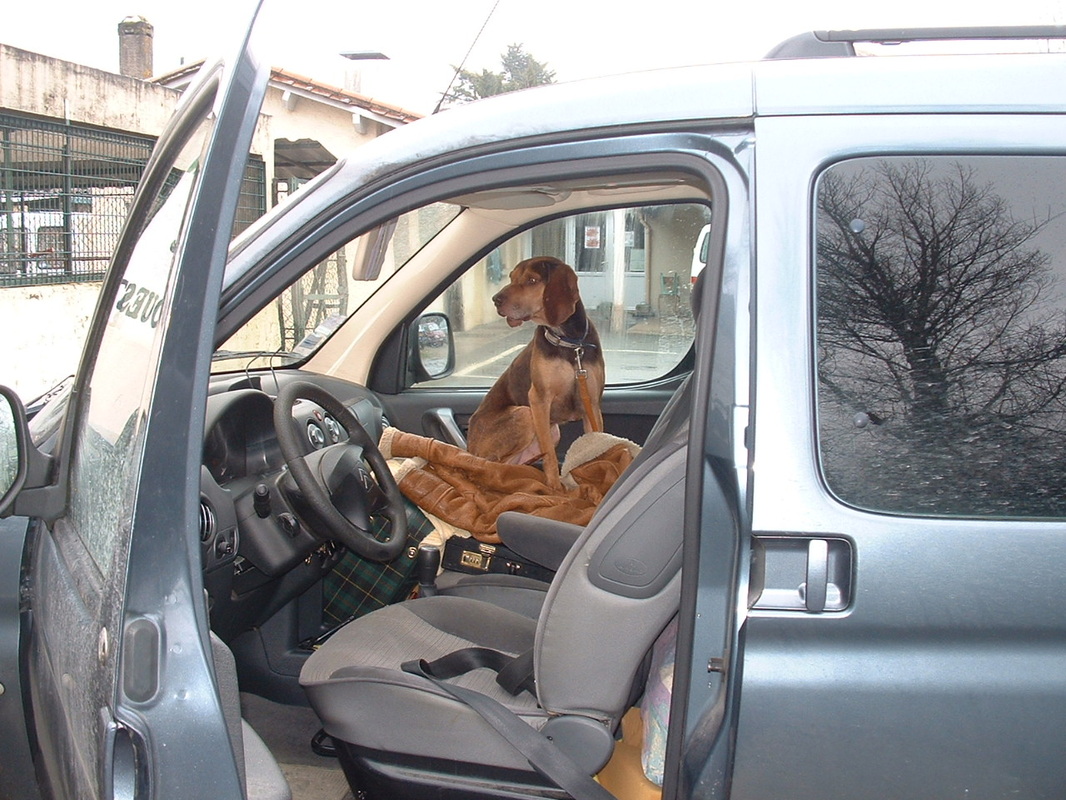 .......so Roady resumed his co-pilot role
Well, after two and a half months, Roady moved on yesterday afternoon. At the end of his latest adventure with me, delivering the magnificent long coated Alsatian, Maximo, to Paris and then doing the rounds of Haute-Vienne and the Gironde collecting new travelling companions. With Aramis and Alice, he was delivered to Vergt to catch his overnight lift to Holland. There, in a foster home of the Lady's Rescue organisation near Amsterdam, it is hoped that his hunting blood may be more acceptable to would be adopters. Here in France, and the Dordogne in particular, the proximity of tempting deer and other wild life is seen as too much of a distraction for a pet dog. 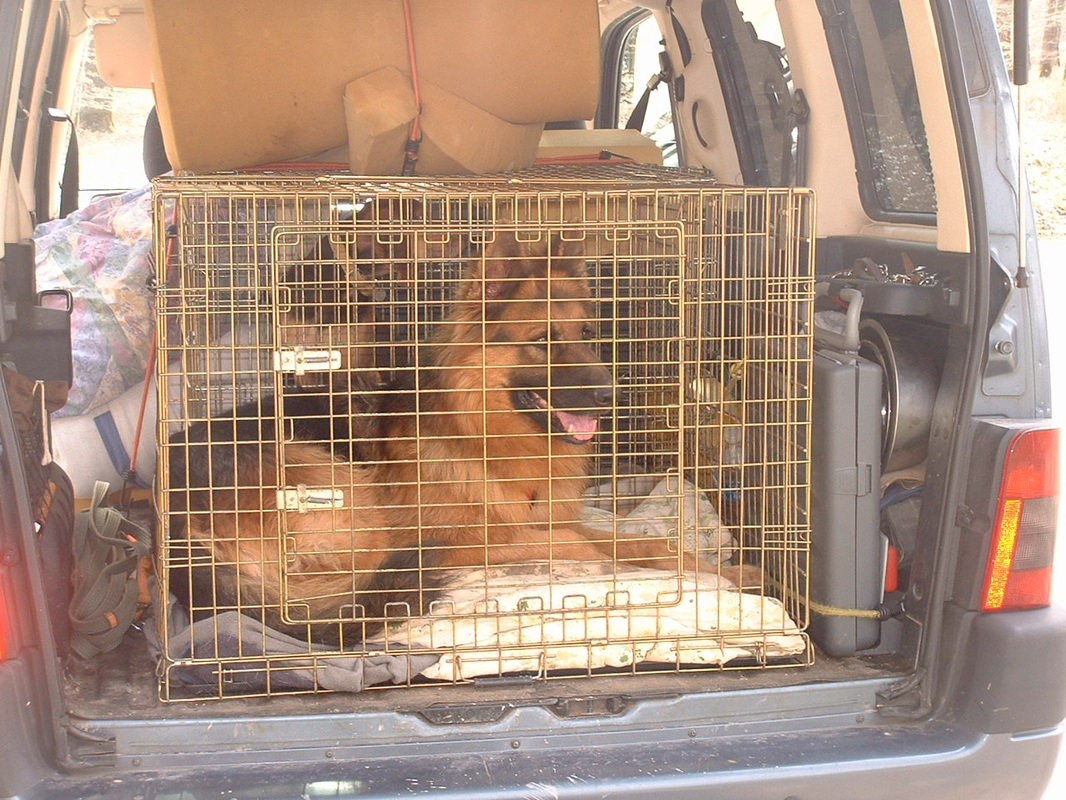 Maximo. Now in Paris and also looking for a home. Anyone? 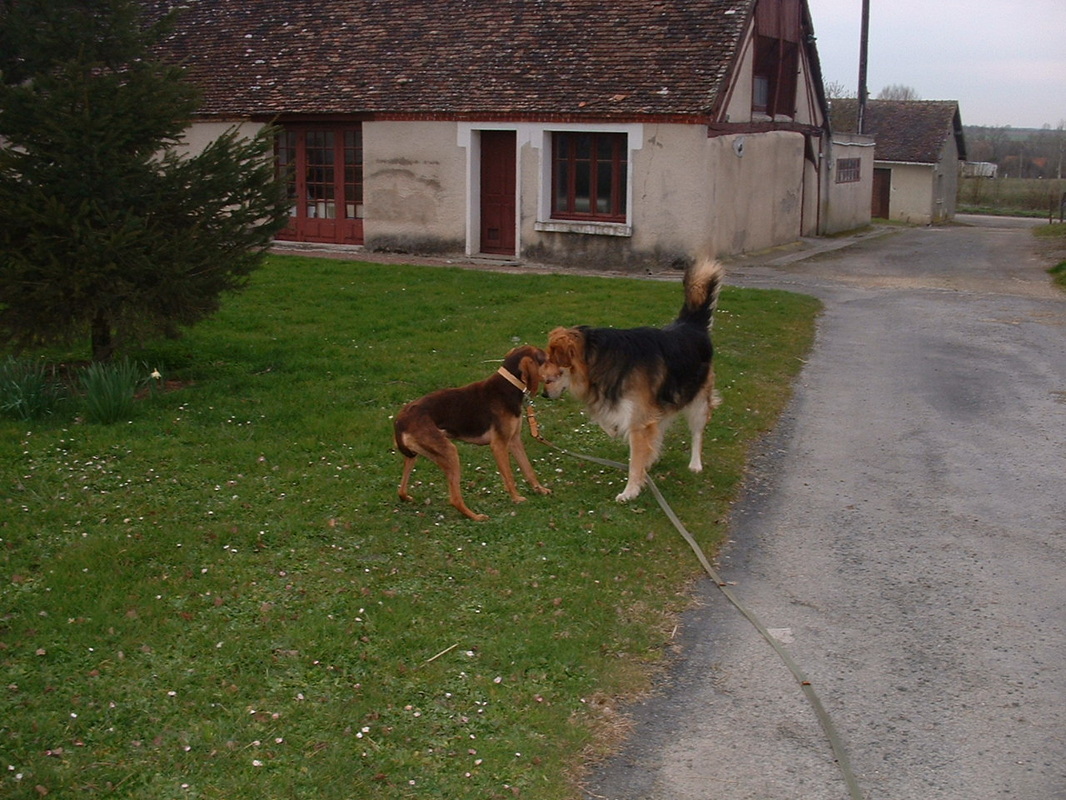 A new friend made along the way. This was outside the routier at Gracay where we spent the night. He wasn't so keen on the donkey which loomed unexpectedly and frightened the life out of him 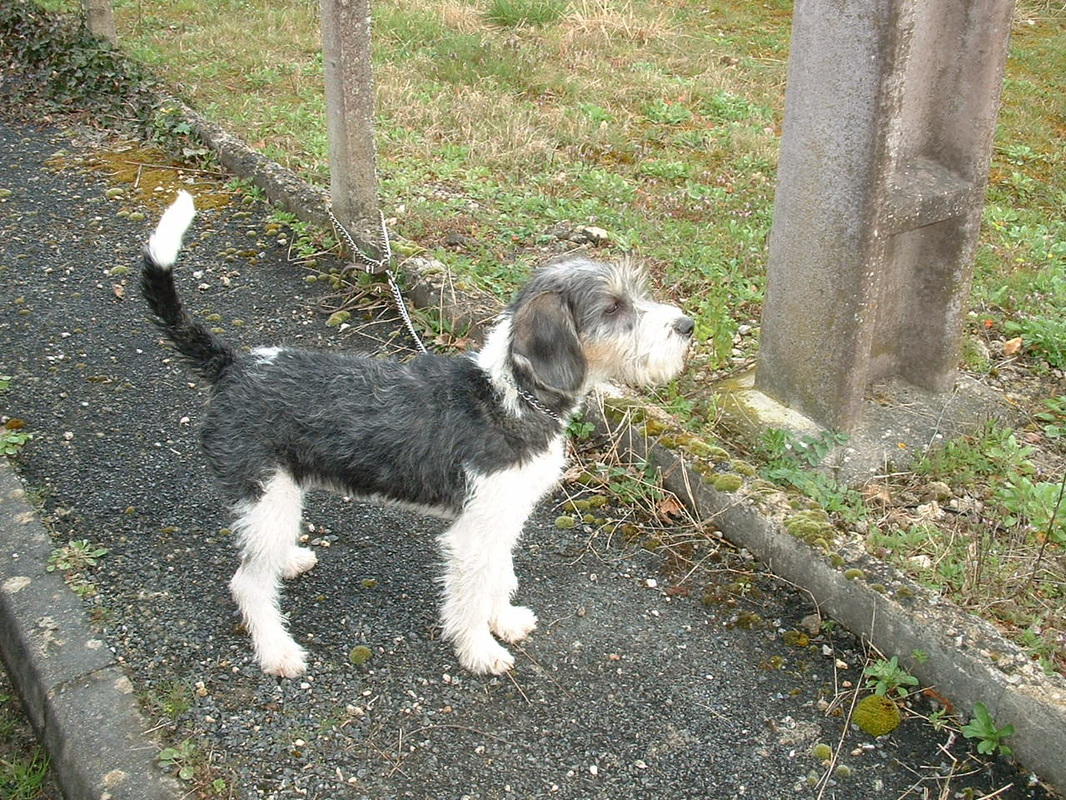 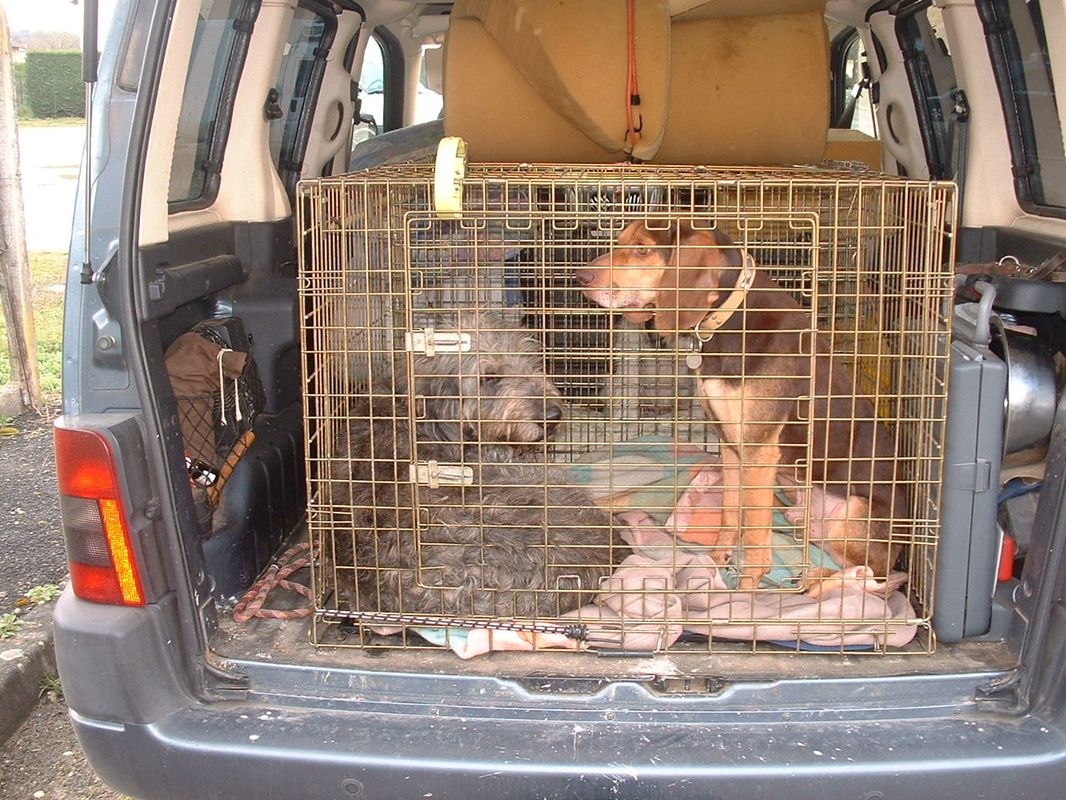 .........with Alice and Roady for the off.
Our house is quieter now, Ramona and Sami keep glancing at Roady's bed wondering where he is and we are missing him too. However, it is a little less stressful not having to keep him safe and constantly operate the 'airlock' when one dog or the other has to go outside. The first mealtime last night was an unusually relaxing affair.
But it is me who is missing him most. Since we first met on that  busy road in the Aude back in January, we have travelled exactly 10,422 kilometres together. Little wonder that I kept glancing in the mirror on the way back from Vergt into the empty space behind. And now he has added another 1,000 kilometres to his tally, but with new friends this time.

So appropriately named, Roady appears to have come to the end of his long journey.

The good news from Amsterdam is that he will join his new, hopefully forever, family next Friday.

He has visited, and been adopted by, a family with no other pets but 4 children for him to play with. He will love that, a very active little chap he had little chance to express his exuberance under the necessary restrictions with us.

We are chuffed to bits and look forward to the promised photos and updates.