Rubis, from Serbia to Lyon, via Belgium

In June 2014 Fran and I with our two dogs, Sami and Tosca,  set off with the caravan for Cambrai to attend the PAD AGM. This is no ordinary AGM but a very French affair.  Held over 2 days of a weekend with much fine dining, fun,  and walks for all the dogs who,  of course, are equally welcome.  But that report is for another time.


We parked our caravan at an excellent municipal site near to the centre of the town and only a 10 minute commute each day to the venue.  It had been agreed that,  instead of us all returning directly home on the Monday morning we would combine pleasure with pleasure and help out with a Dobermann girl in terrible distress near to the Belgian border. 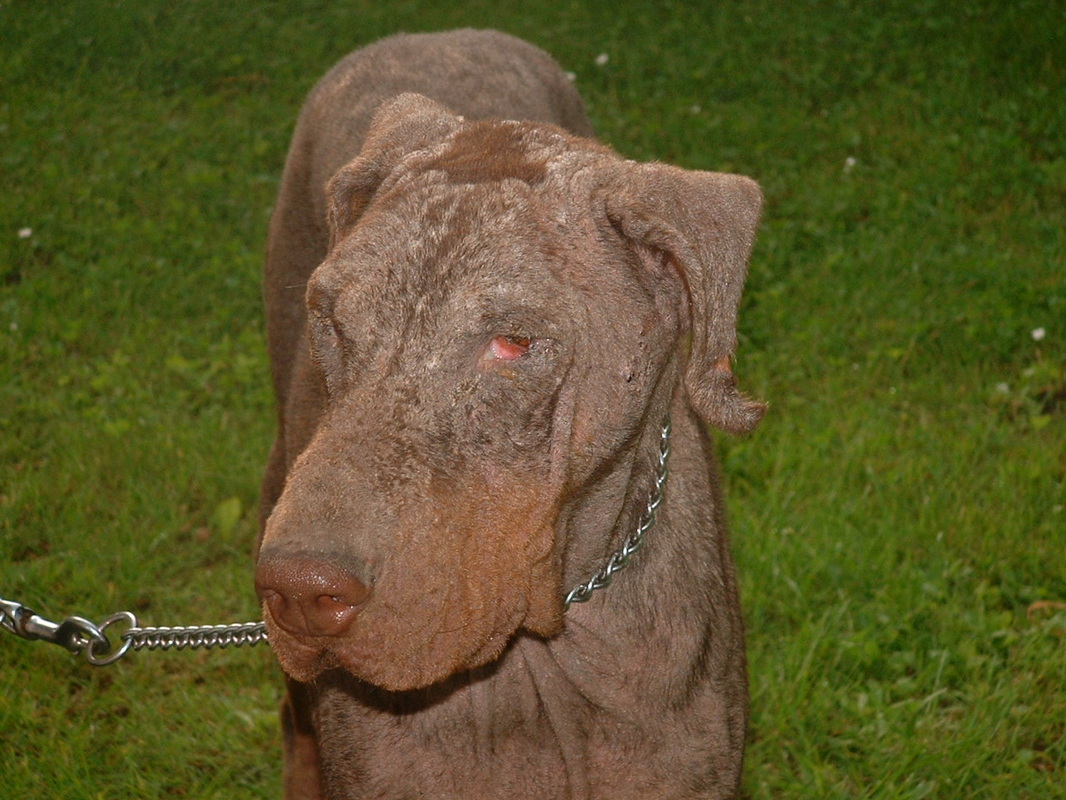 Rubis, as I first met her, barely able to see out of her eyes. Demodecie hardens, wrinkles and cracks the skin. She looks more like a Shar Pei than a Dobermann
Rubis had started life in faraway Serbia back in May of 2012, thus only 2 years old, but, after being abandonned in Belgium and then adopted by a young man with presumably the will but not the resources to treat her she was at last, after nearly a year of persuasion, taken into the care of PAD.  PAD (Protection Associative de Dobermann) is not just a rehoming organisation, it exists equally to rescue and bring back to health Dobermanns wherever they can be found in need. And so it was with Rubis, she was suffering from a horrible disease called demodecie, which seems to affect Dobermanns more than most. I have some small experience of this in the past having transported a large male called Goldy from the north to a foster home in the south where, within months he was completely cured by care and costly treatment. A feature of this disease is that it destroys the fur on the dog leaving it open to the elements and thus suffering and even death from exposure. An extreme case of this was Brianna who was due to leave with me and her male companion, Gary, from a refuge in the south but sadly succombed to her illness the night before I arrived.


Rubis was in just such a state when I travelled on that Monday morning the 80 kms or so to the border where I found her shivering and fearful in an outside kennel in the back garden of a tiny terrace house. The young man who handed her over indicated by his obvious gesture that I must be prepared for a malodourous journey. He was wrong, the odour that we experienced at that time was not from Rubis,  a fact which was proved on our subsequent journey south. 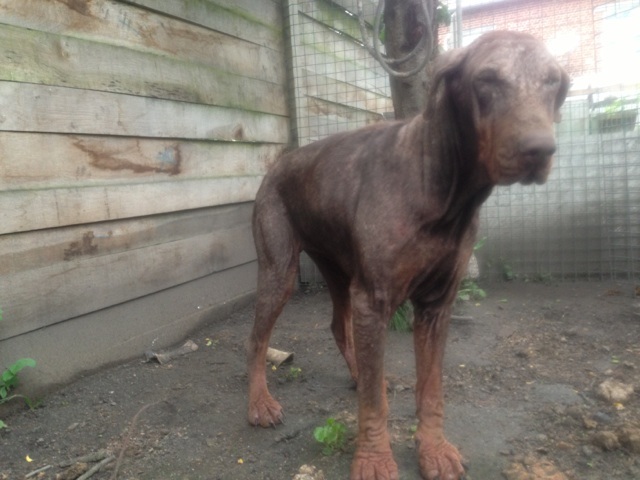 This had been her home for a year
She readily jumped into the back cage and settled down in perfect co-existence with Sami and Tosca who had come with me, sharing the larger front cage. The journey back to the campsite was without incident and Fran, the caravan, and all our stuff were packed up and connected just before the violent storm which had been predicted, but for the night before!  We set off in driving rain and progressed steadily southwards, in equally steadily improving weather,  through St. Quentin, Soissons, Chateau-Thierry, then past Troyes and Dijon towards Chalons-sur-Saone. 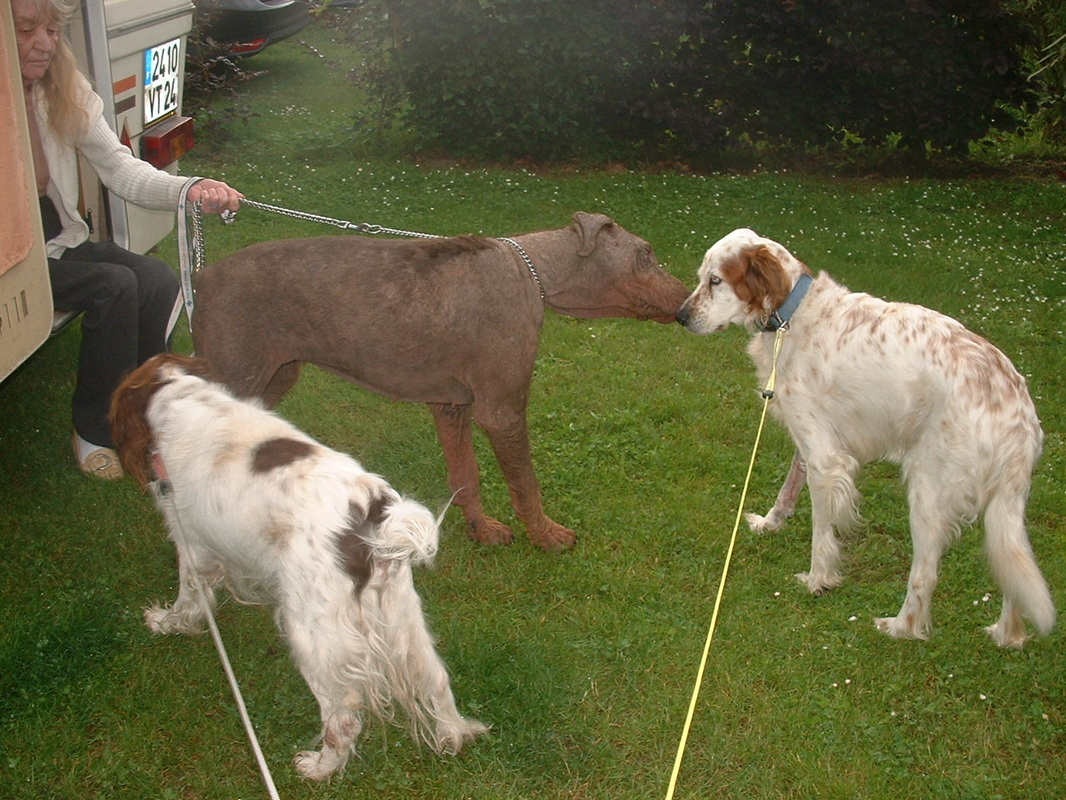 Meeting the family.....
The routier where we had hoped to spend the night was, as I half suspected, closed, this being a bank holiday, so we parked in a large lay-by and set about making a meal in the caravan. All the dogs were fed then walked in a nearby field before being settled down to sleep in the car. 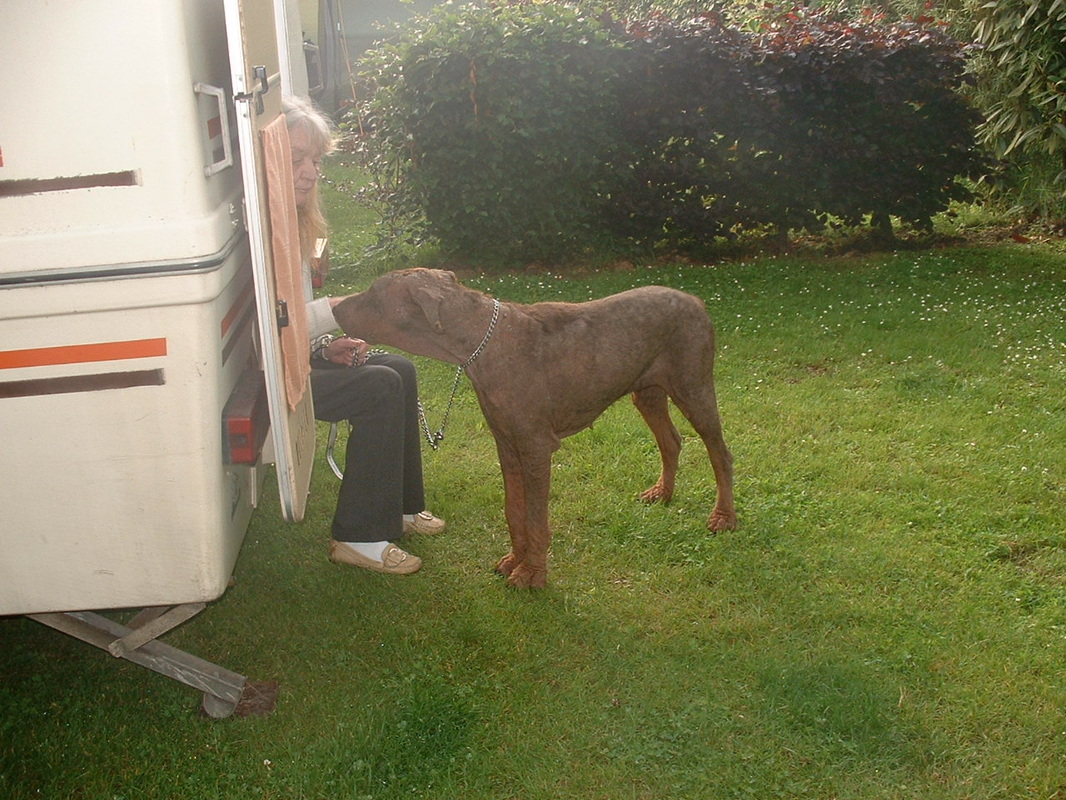 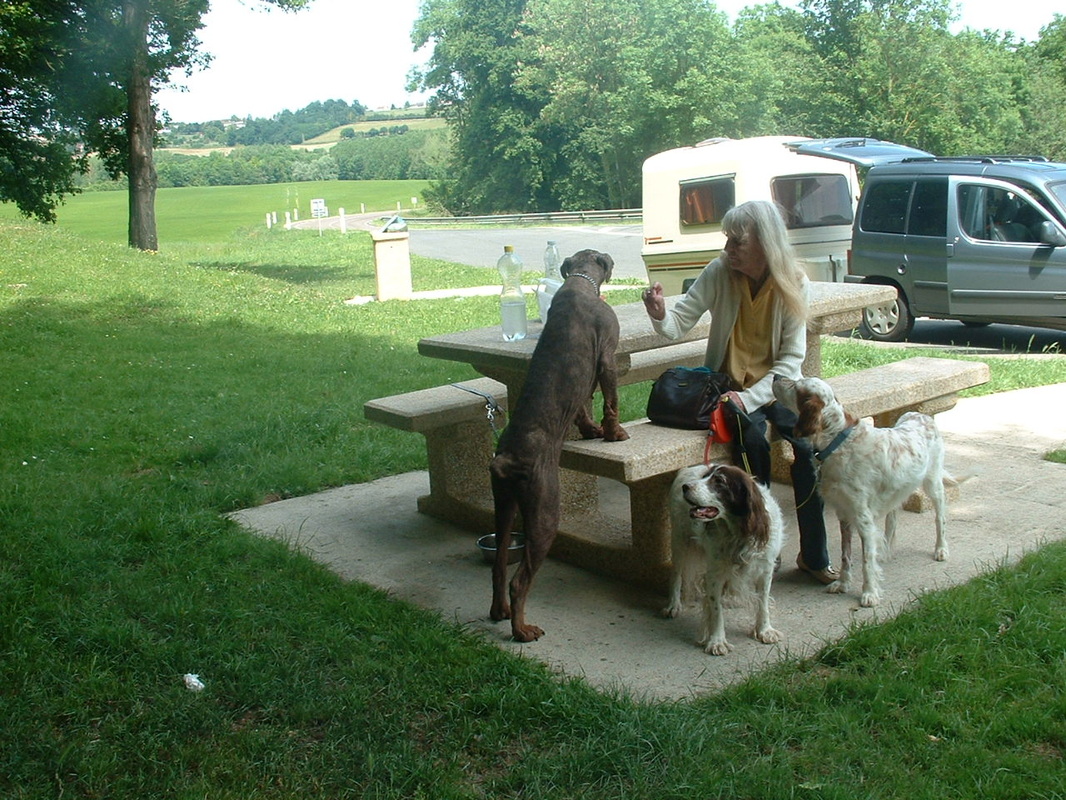 Lunch en route.
No problems in the morning, a brief stop for coffee on the way to Chalons where I diverted from the main road to fill up at a cheap Carrefour that I know, and then we turned south west at Villefranche- sur-Saone to skirt Lyon to our final destination to the west of the city. We got there by a tortuous route around a village of narrow, and hilly one way streets which eventually brought us along a railside chemin to the large house of the lady who was to bring our Rubis back to health and adoption. The turning into her large garden was too tight to turn into so I set myself up to enter in reverse. The only problem was her electric gates, they wouldn't open, and it was fortunate that the driver of the large 4x4 blocked behind was not impatient to get to his own destination. A bit of a push solved the problem and soon, gates open and closed, all three dogs were set free to explore their new surroundings. Rubis in particular was a revelation. We had already seen the sorry and frightened dog liberate herself mentally in congenial and non threatening company on the journey but we were hardly prepared for her joyous exploration at a pace of the large garden now at her disposal. She raced back and forth before falling with relish on the large bowl of water set out for them all by her new protector. She certainly had not been used to this kind of treatment or freedom in her life before. 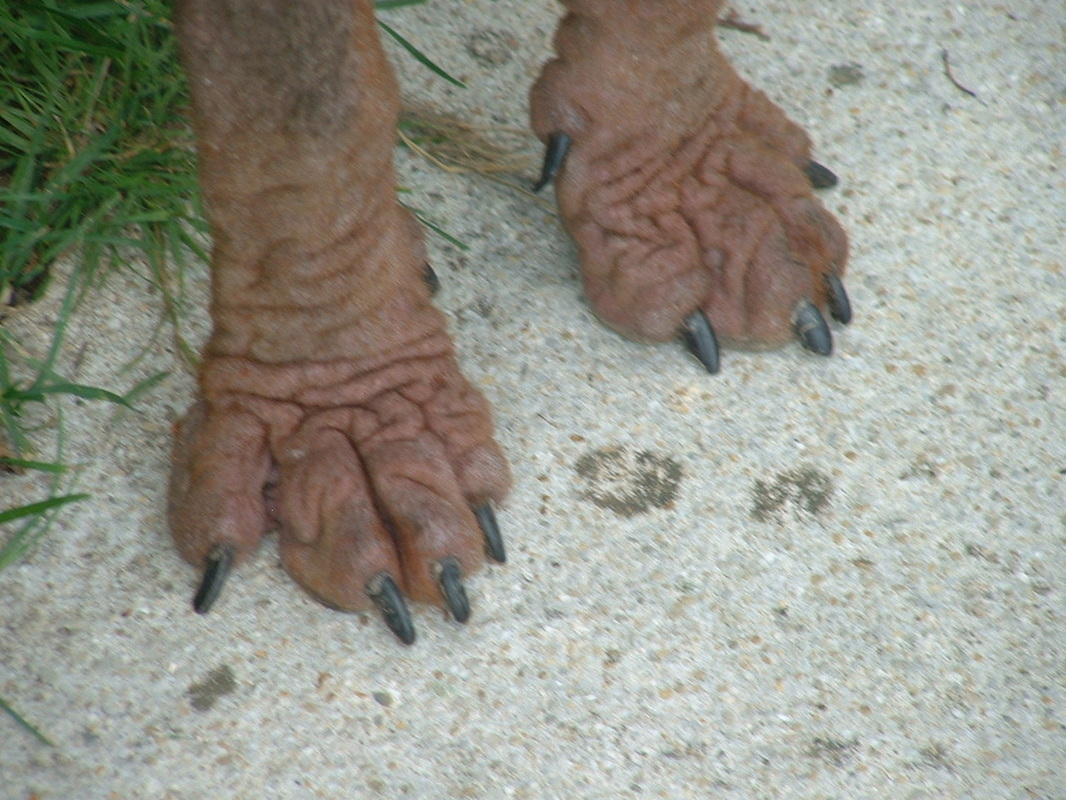 The disease has an alarming effect on feet.
We passed a pleasant hour in the sunshine with Madame Joelle, then it was time for us to go and take our leave of poor Rubis, though no longer really 'poor' Rubis, she was already firmly on the road to recovery.


Our route home took us to Limoges but, as it would be after 8pm when we got home and would not feel like cooking, we parked at the Centre Routier north of the city, ate well, and bedded down for the night.

Freedom, care and attention, coupled with regular vet checkups have all combined to start the transformation. It may not look like much but the regrowth of fur on her back and elsewhere is significant. Goldy, the fellow sufferer I mentioned earlier was nowhere near as bad as her with this condition, and it was 3 months before he was fully recovered enough for adoption. 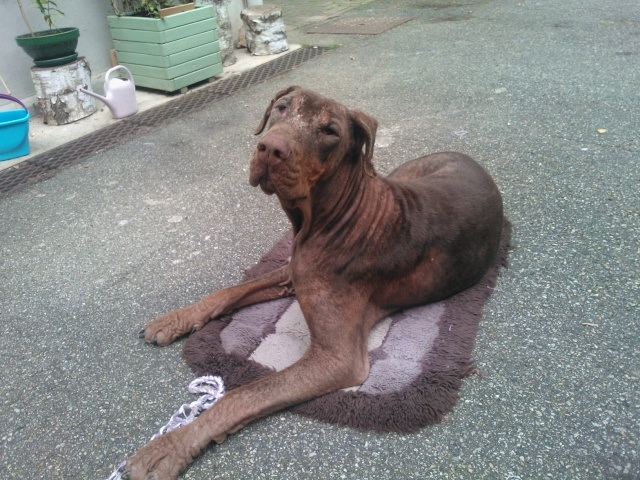 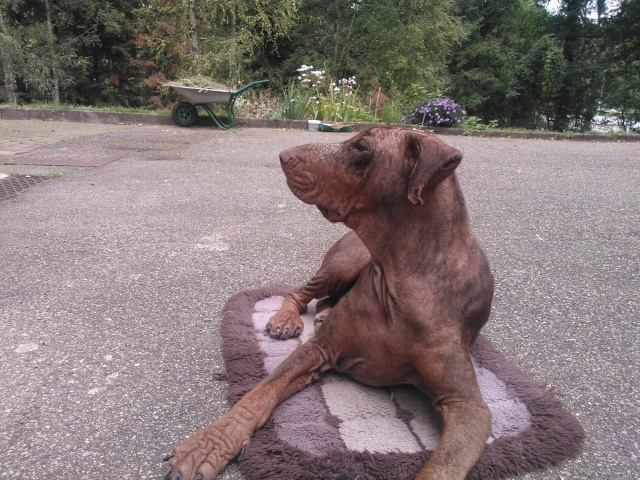