Rupert, the great escaper. Our longest resident at 9 months, till happily re-homed with Kath.

It wasn't long before more jobs came in, fast and furious. Two more doubles in quick succession.
Firstly Scruffy and Alex, mother and son, from a broken home in the Gers and needing to be taken out rapidly to a foster home in a small village in the Charente.

Arriving early one morning at a large house on the edge of a village I found the owner, sad at his situation which had caused this upheaval and also at losing the 2 little terriers. A friend from the village was there to help and lots of stuff, toys, food and bowls etc. were to go with them. They were very close these 2 and, although I had 2 cages  ready for them it was decided that they would be happier travelling together. So it was decided. 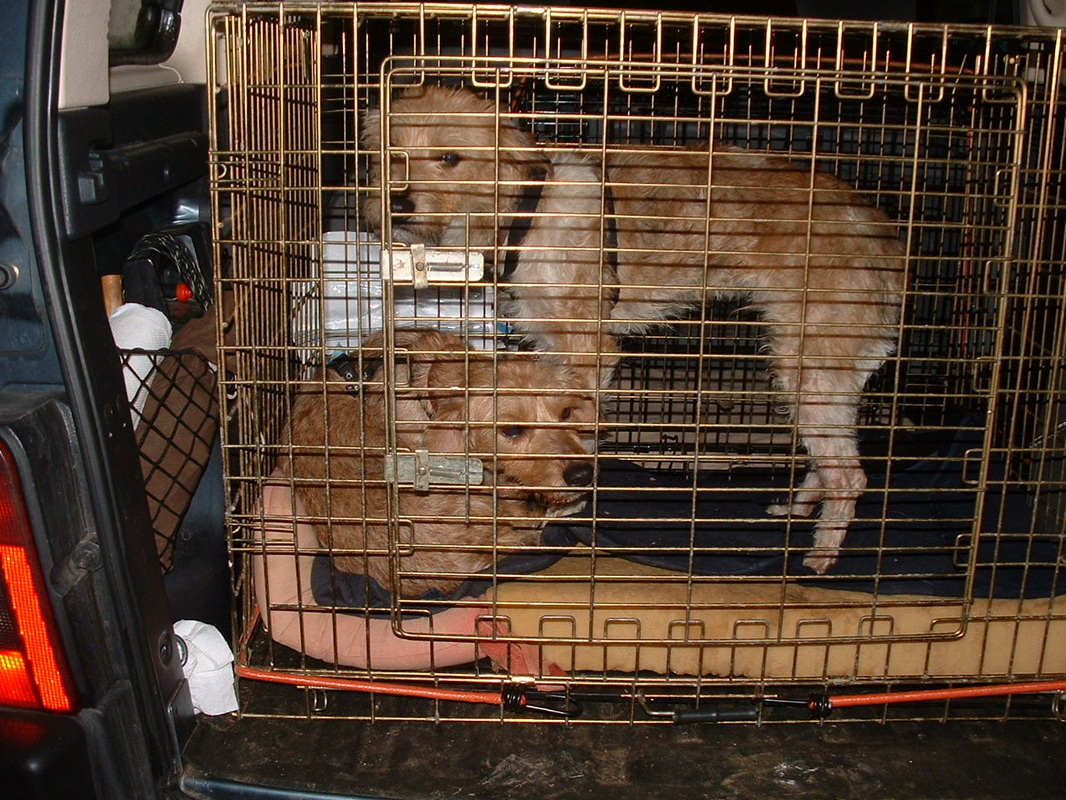 The 6 hour journey was uneventful, we stopped once for a break, a walk around and the offer of water to the north of Périgueux and arrived in our destination village after dark, and in the dark! Several queries produced no sound information but I was directed vaguely to a lane leading out of the village. As I slowly climbed the hill I noticed a house lit up with Christmas lights and a woman in the garden. She too had no idea of the people I was searching for but her young son had. With an abandon and trust largely absent these days in many places he climbed in the side door of this stranger's car and perched precariously on top of a bag of croquettes, the only place vacant. Back down the hill 100 metres then right into a darkened alley and round the back of the house on the frontage. Only my headlights illuminated the scene, 2 back doors, left and right. He indicated the left. Ignoring his protests I thanked him for his help and insisted on driving him back home before returning to find Katrina outside waiting for us.

Soon we were in the back garden where Scruffy and Alex were introducing themelves to her own dogs, a Springer and a couple of smaller ones. More than that, she had a bag of chicken bits and the 2 newcomers greedily broke their 24 hour fast. 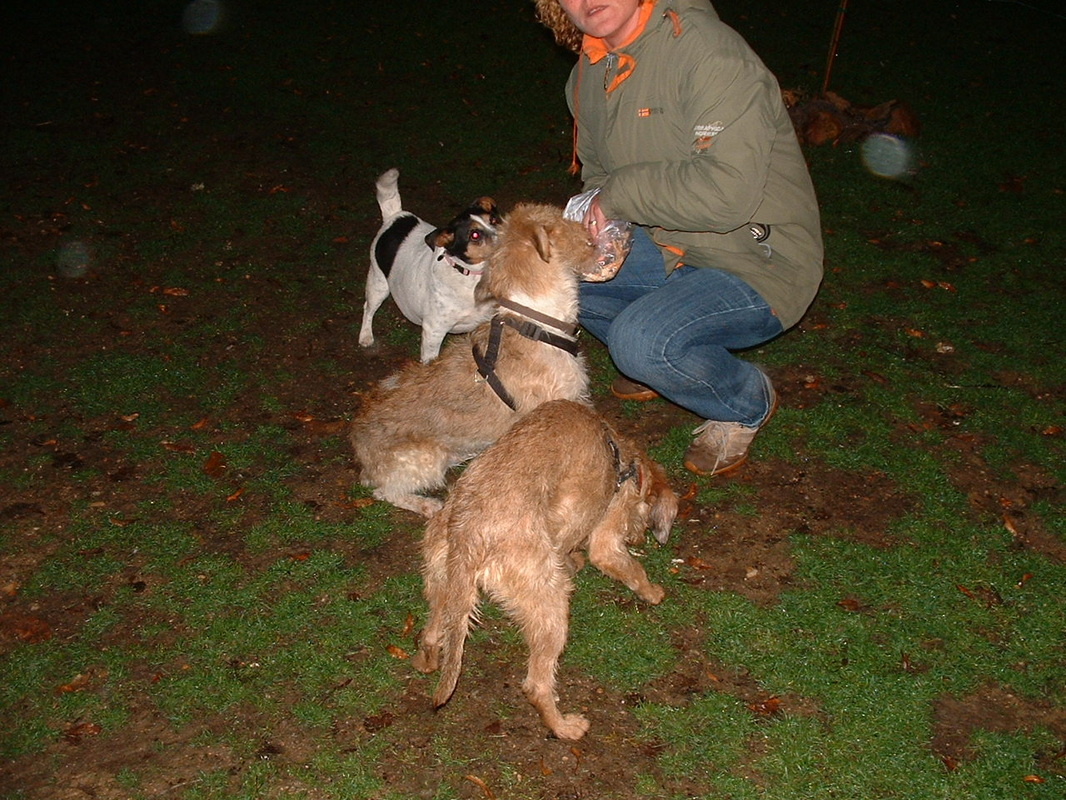 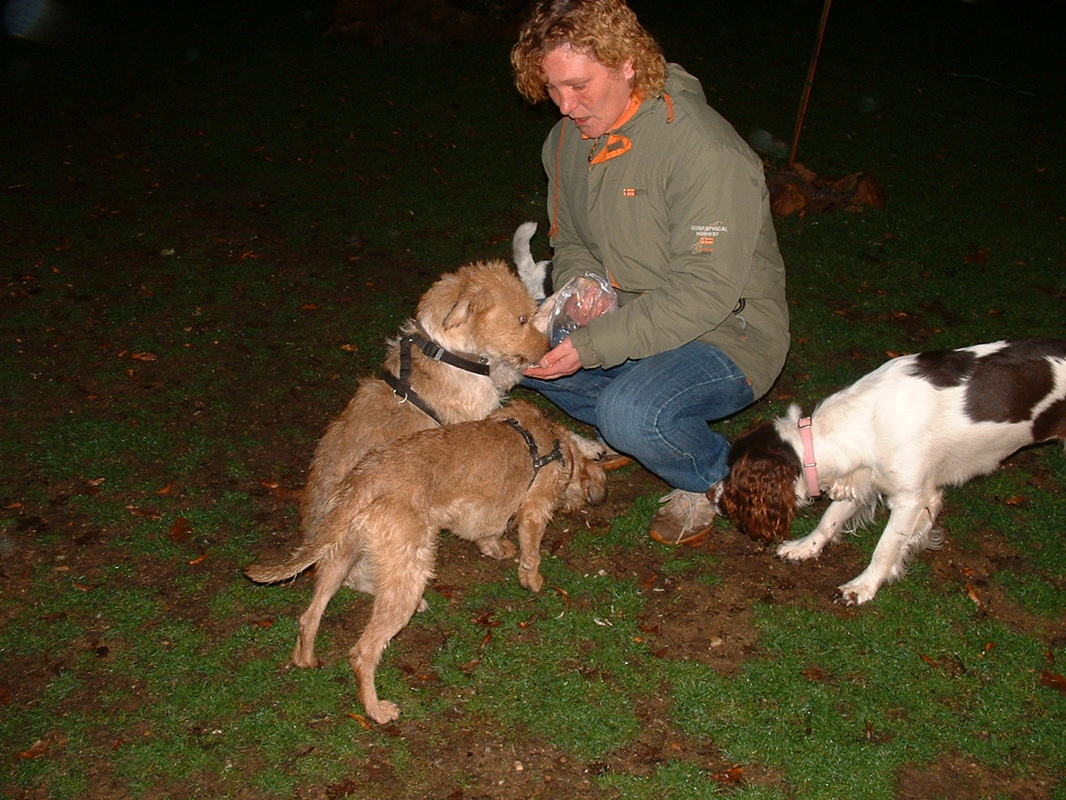 Then it was my turn, not to eat, but for a welcome cup of tea and a chat before returning home.

The story has a bittersweet ending. Someone wanted to adopt Alex but not his mum. However Katrina had fallen in love with her and decided to keep her, so the die was cast and Alex departed for pastures new. Not so sad for dogs who take such parting in their stride, but we learned months later that he had disappeared, never to be found. We can only hope that he found another loving owner all by himself. Scruffy continues to thrive.