I had a call that there was a young Rottweiler girl in peril at Perpignan. Apparently the result of a broken home and who was not now wanted by the remaining partner. She was being neglected as a result, left alone on a chain for days on end and only saved by a kind neighbour who came in to feed and water her. 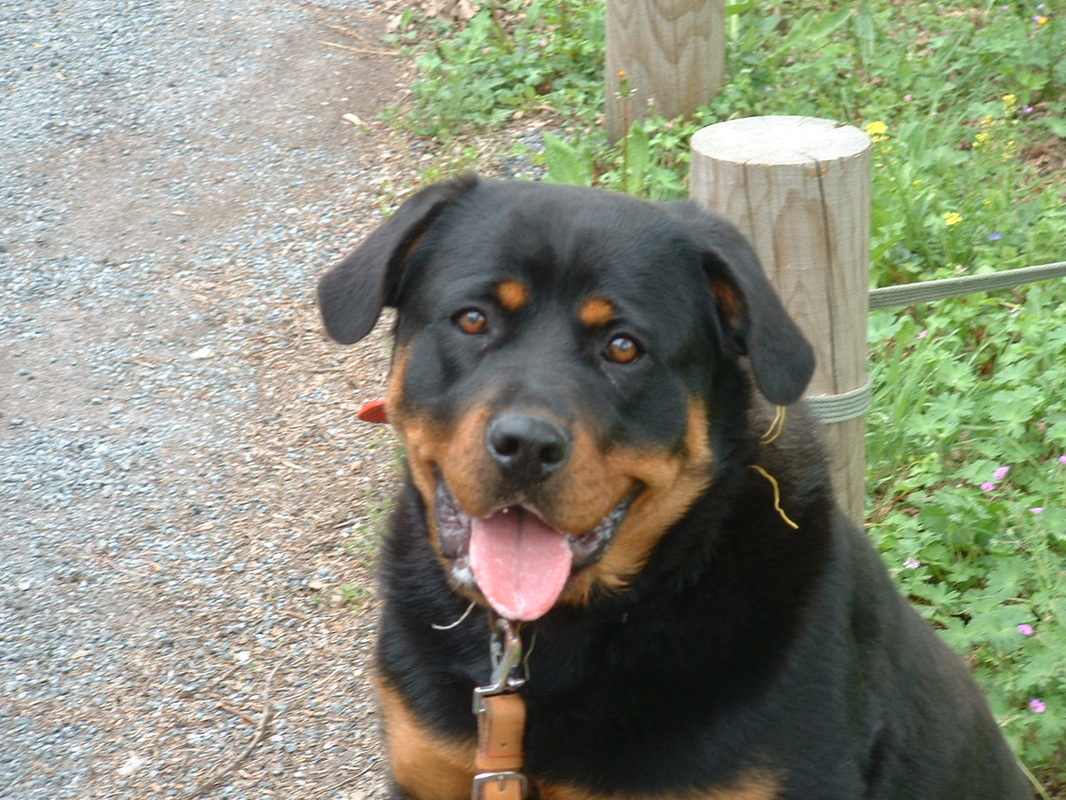 The owner was a little unpredictable, one moment asking for help, the next resentful of necessary questions. She did agree to allow the dog to be examined by a vet which gave her potential rescuer the chance to check if she was chipped or tattooed. As requests to relinquish her from the ‘owner’s’ control wavered between ‘yes’ and a suspicious, ‘no’ it was decided that as there was no legal title to use other means to get her away. An understanding relative was contacted who agreed to spin a yarn and bring the dog to a rendezvous. This was done but it was thought that it was unwise for me to come too close to collect her so a further rendezvous was arranged at a nearby péage.

I travelled down a well known route via Cahors, my first refuelling point, to Montauban, my overnight stop. I had wanted to do the job the following week as I was fully occupied by a bank appointment, the May 8 holiday at which we always support our Ancien Combattant friends at the memorial and a long distance job to Barcelona. However, it was an emergency so I decided that if I left directly from the bank at 4.30pm I could be 280 odd kilometres away at Montauban in time for dinner. That would leave me a longer than usual journey the following day but, in the circumstances, was doable.

La Delice d’Annie just off the autoroute south of Montauban with its patron Jean-Francois in attendance is a favourite place of mine. And not just mine as the serried ranks of the enormous lorry park bear testament to. After reversing into my usual spot under the trees on the grass out of the way of the heavies I found a space at the bar just enough to squeeze through and collect my kir. I sipped it outside in the warm evening air idly watching yet another driver arrive, circling the parking area looking for the smallest of spaces to insert his 18 metres into. As I got through to Fran on the phone he found it, just big enough, he cautiously inched it in. No shunt needed, a real professional.

And so to dinner, helping myself from the vitrine I settled next to fellow diners and we gave our orders. Mine, blanquette de veaux with a delicious liquor and a generous portion of carrot, an amply stocked cheese board followed by smooth ice cream. Un petit café on the way out and so to bed. To read, to sleep. What a life it is on the road.

The alarm went off at 4.30 the next morning and I was soon inside the resto which opened a little earlier than the published 5 o’clock start. I reckoned about 4 and a half hours to my rendezvous with Helen and her French husband Robert near to Perpignan. I took a very familiar route past Castres and Mazamet towards Beziers. This time though I decided on a new course from there in the village of Labastide Rouairoux by turning right over a mountain road directly towards Narbonne. Not too tortuous I enjoyed the change and was soon on the main road south from the latter towards Perpignan. 10am was my rendezvous; I pulled into the parking area of péage sortie 41 of the A9 at 9.15. I love being early, time to relax and walk around, perhaps read a little. My phone call found Helen and Robert on their way and soon there themselves. A retired couple they had done a sterling job in rescuing Simba, perhaps at some risk to themselves and would contribute to her escape financially. 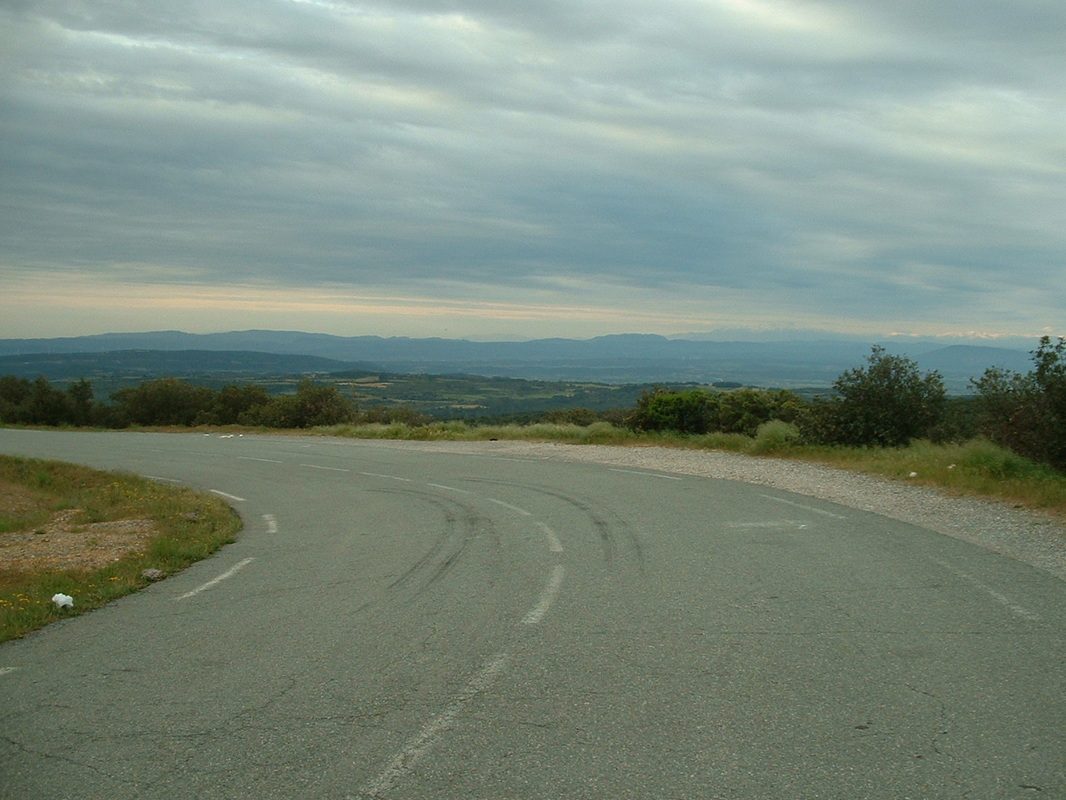 South towards the Pyrenees
This large and robust, fierce looking but very gentle dog, emerged from the back of the car and walked happily with me for a few minutes on the nearby grassed area. She was very strong and did pull a bit, but looking as she did I was ready for that. We encouraged her into the back of my car. It was in large dog mode, that is, one cage behind the folded rear seats with its door secured in the open position. I was sure that the less than agile Simba would not be able to climb over the top to join me in front while we were moving but experience has taught me that where dogs are concerned nothing can be taken for granted and I clipped 2 normal lead chains together and secured her to the rear anchorage point. This allowed her free movement throughout the cage and the space behind it, but no further.

After 16 minutes chatting with Simba sitting calmly in the back of the still open car, Helen and Robert said their sad goodbyes and my new lady friend and I took to the road. The return trip was a mirror image of the outward one, apart from the 3 stops we made en route and the bypass of chez Jean-Francois at Montauban. At each stop I reached in through the side door to clip Simba to the 10 metre lunge rein before opening the back and releasing her from the restraining chains. She was very obedient, she knew her name and she stayed when instructed in English with the accompanying flat hand gesture to allow me to take photos. Very useful, many dogs, anxious to stay in contact, annoyingly, but charmingly, insist on walking towards me completely destroying the photo opportunity. She took the water offered, also unusual, and, although needing a bit of a leg up, climbed willingly back inside when the time came to move on. 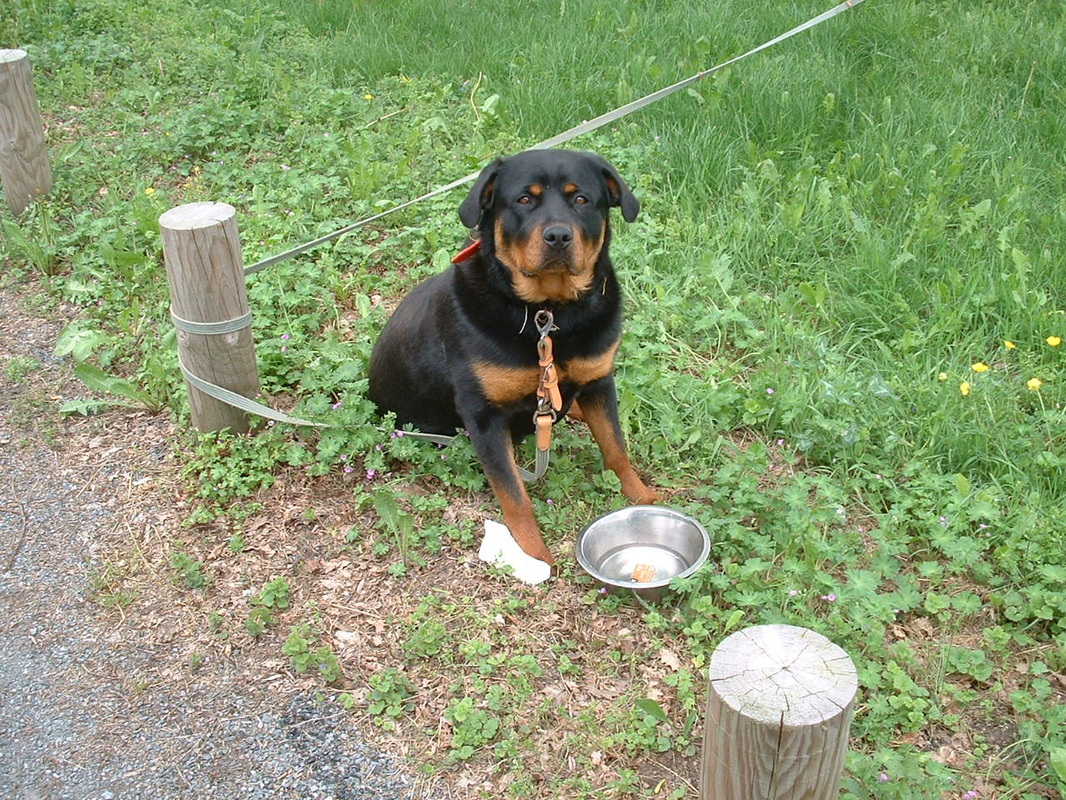 It was a long day for both of us, because of my enforced late start on the first day I had some 13 hours to do in total before we rolled into the garden of Sharon’s Chenille de la Dordogne kennels at St. Martial de Vallette in the Dordogne and it wasn’t much less for Simba. Once there and the gates firmly shut behind us by husband Andy, Simba was allowed to roam the large garden in unhindered freedom for the first time in a long time. She loved it but came back to me for reassurance from time to time while we chatted, the last time to sit between my feet with her back to me but head turned vertical to plead for a little fuss before I left. 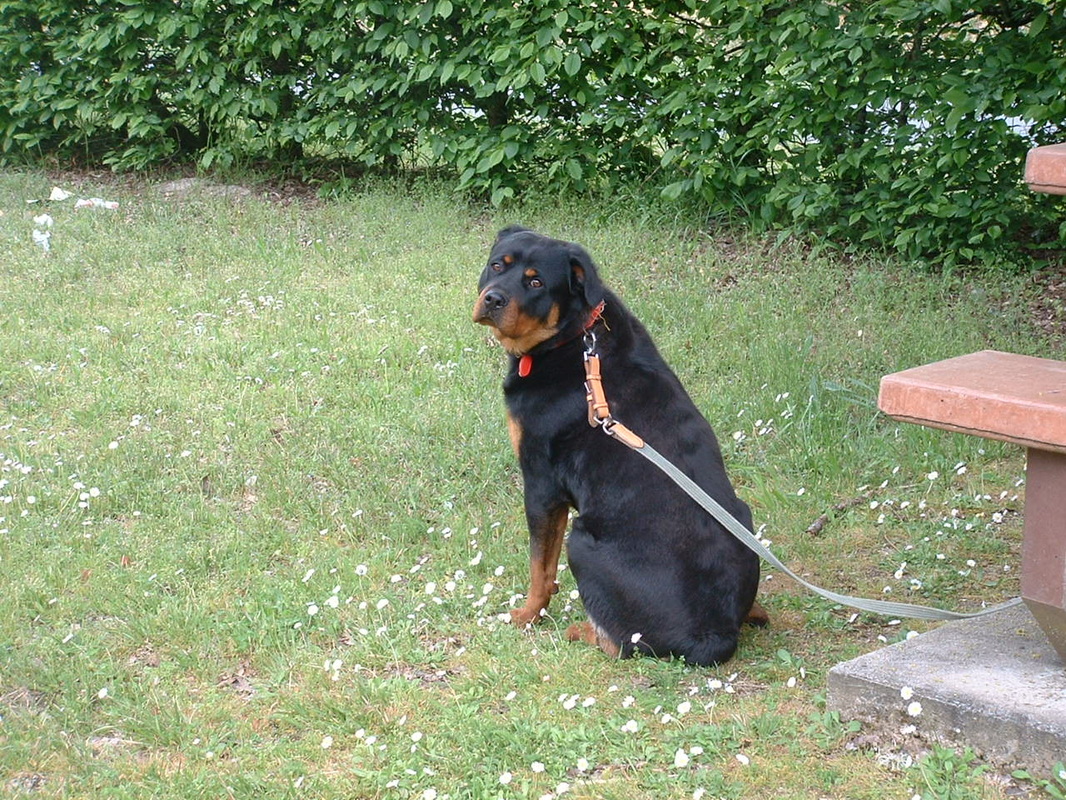 I left at 7.30pm for the 20 minute drive back home, happy that Simba was in a better place but a little concerned that Sharon had taken on a category 2 ‘dangerous’ dog which may be difficult to rehome given the severe restrictions placed on owners by the law. If ever proof was needed of the silliness of this branding of complete breeds just because of what some unscrupulous people had trained them to do, sweet and gentle Simba was that proof.

Just over a week later Simba is behaving well within the robust parameters of such a large and heavy dog but has been diagnosed with a laxating patella. Yes, neither did I, but apparently something has come adrift in her right hind knee and might need an operation. Happily the vet thinks this isn’t terminal and, also happily, some kind person is donating the money for the op. Till then, she is not on the market, but soon will be looking for some kind Rottie lover, experienced with the breed and able to give her the love, and education, that she has so far been lacking.