Sirius, our first Beauceron foster. Lovely boy, Should've kept him.
Raised on a forum, the plight of Siria the Dobermann, once rescued from a puppy farmer's neglect by an English family, now on hard times in the Tarn et Garonne.

The situation was urgent as she had only just been offered a foster home way up north in Le Mans and the desperate efforts of the members of the Dobermann protection forum, PAD, to organise a relay which would involve at least 4 different helpers was understandably impossible to bring together in such a short time. With only 3 days to go such bizarre solutions such as moving her to Bordeaux for a few nights or to Montpelier then via Paris were the straws being clutched at.

So I was asked to help by doing the whole journey in one go. It wasn't clear if either the family who owned the dog or the fosterer at the other end could offer me bed space for the night so I made the caravan ready.

The caravan adds considerably to my costs, which I do not pass on, so I left leaving with it till the very last moment and, literally, as I was walking out of the door the phone call came to say that a bed and a meal was waiting at the pick up point. Too late to alter my plans and, in any case, the lack of a similar available bed at the other end, meant I had to take it anyway.

A drizzly day stayed with me most of the way south but, exactly on time 4 hours later I rolled up a leafy country lane to the single story stone built house which was my destination. A cacophony of noise from various small dogs inside greeted my entrance but I was soon sidled up to by my, silent, friend of the next day or so. Siria is a lovely black and tan Dobermann, her prominent nipples betraying immediately her former unhappy life as a puppy machine.

After a large dinner the chat, about dogs and horses, with the odd glass of wine or two went on longer than any of us intended but, at 2 in the morning I was settled into my large comfy bed for the night.

I had wanted to set off at 8 on Friday morning, 600 kms to destination is 10 hours journey (not driving) time for me and I wanted to deliver Siria at 6pm.
I left half an hour late and arrived half an hour late. Thanks to Google Earth I had previously been able to pinpoint the precise house in a narrow one way, and well parked up, street near to the city centre of Le Mans, so was spared the daunting prospect of dawdling along trying to read house numbers while keeping one eye on the road.

In contrast to the previous day our journey north was made in almost continuous sunshine. Very nice, as we made several stops, 4 or 5, and each was a pleasure with such a calm and obedient dog. My 8 metre lunge rein once more proved its worth, giving Siria much freedom to wander about in addition to the other necessities. 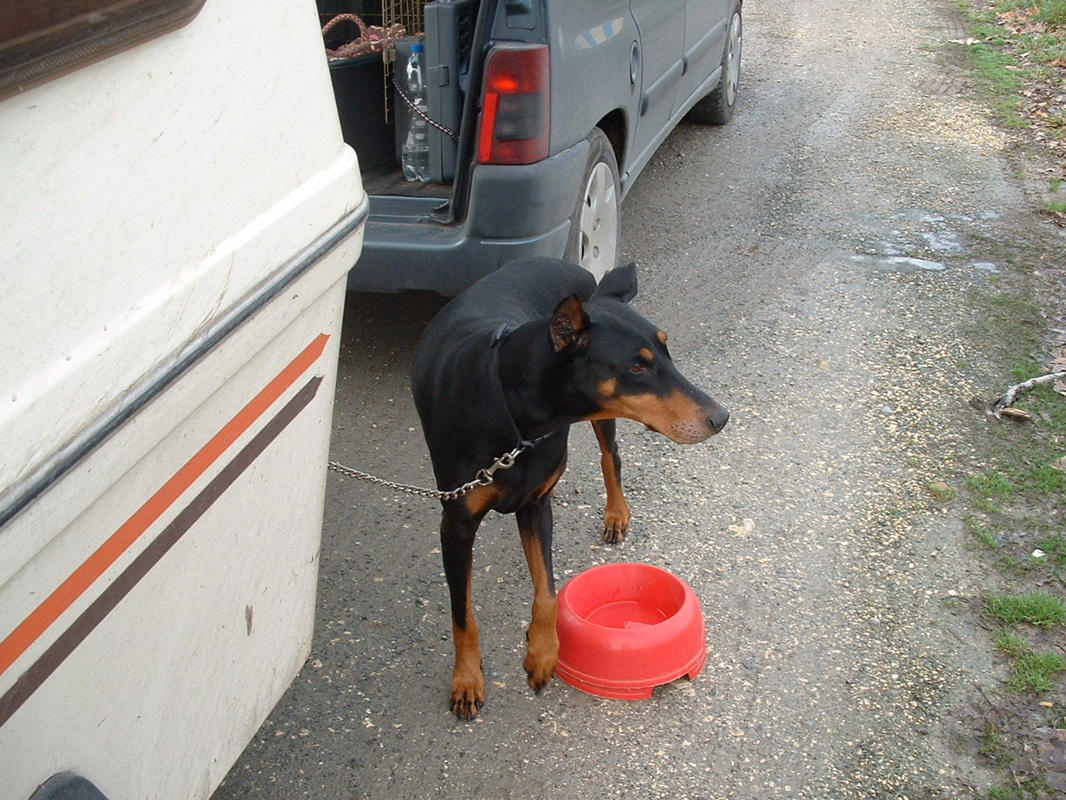 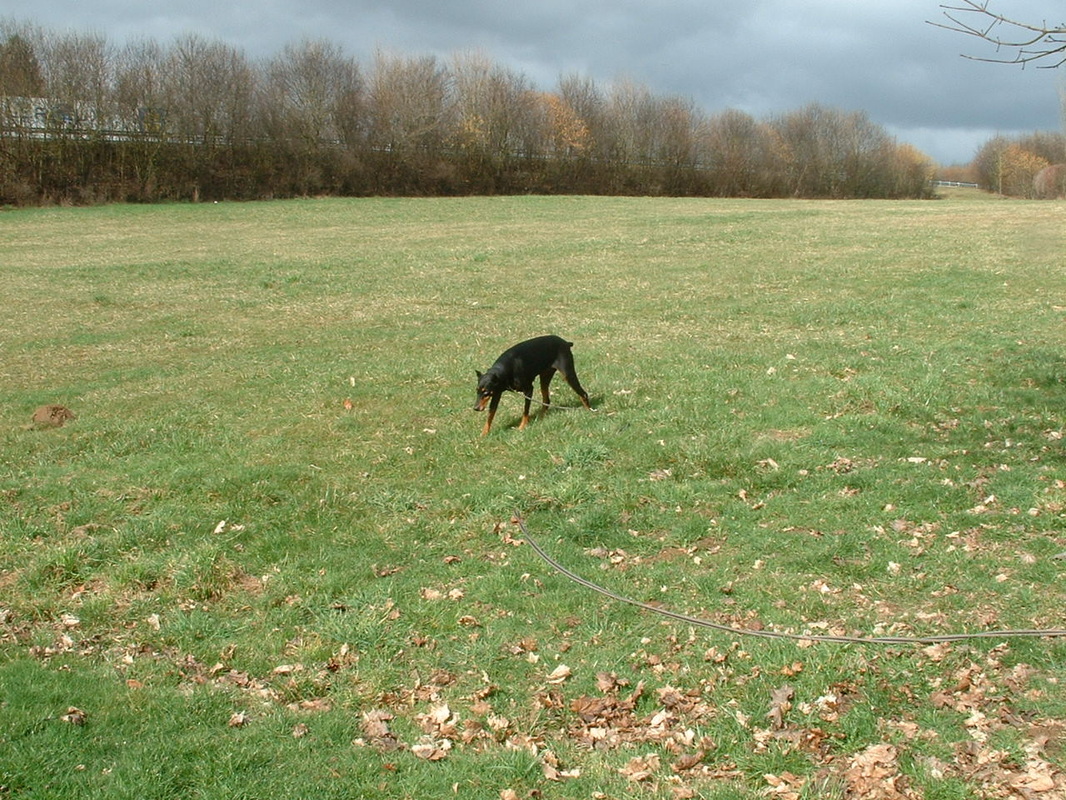 After that a little relaxation before the lid comes down for the next stage. With larger dogs like her I usually leave the cage door open with suitable bedding behind it so the  dog can choose the most comfortable place to stay. I think it can be seen why I described her as ‘La Reine'. 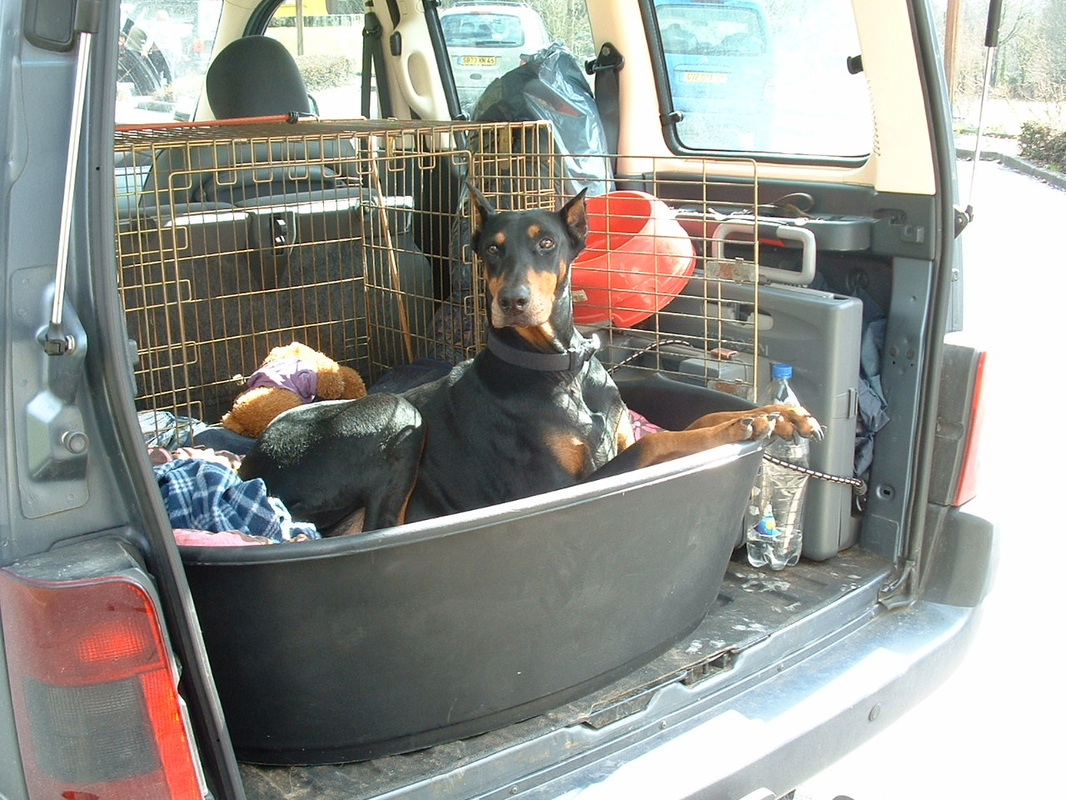 She had spent the first half hour of the journey deciding which was the most comfortable spot before finally realising that her own bed and bedding was the favourite, not far away was her teddy bear in the cage, and just behind the door, her bowls. What more could a girl need?

My well planned route was fine, for the first 30 kms or so, then, heading north east towards Cahors, my planned refuelling point, I saw the dreaded 'Route Barree' and 'Deviation' signs. I don't use satnav and avoid the use of a map normally by means of my bold 28 point typed instructions on the sun visor so I persisted in following the signs even though I knew by my 'compasses' (satellite dishes) that I was heading in a roughly west of north direction. By the time I got to Fumel it was obvious that a continuation to Cahors was out of the question so chose the D road NE to Gourdon and soon my objective, the old N 20 to the north. The whole thing had only cost me an extra 10 kms.

With the caravan I find the most convenient autoroute speed is 100km/hr. Much above that and it swings a little, more to do with the short wheelbase giving it a bit of a sit up and beg aspect, rather than the weight, which is considerably less than the steady Berlingo.

At Chateauroux, back on the nationals, it was off to Tours where I planned to venture the free motorway of the A10 up the east side before jumping off for a short bit round the northern rocade to my turn off for Le Mans.
Nightmare, not only did the 'free' section charge me 90 centimes but the 'short' northern section cost me half an hour of stop/start heavy traffic between lights and roundabouts. My grumblings were matched by Siria's whimpers. Sitting up to see the scene she liked it no more than I did, it is the steady hum of the wheels on the open road that she, in common with most dogs, likes. 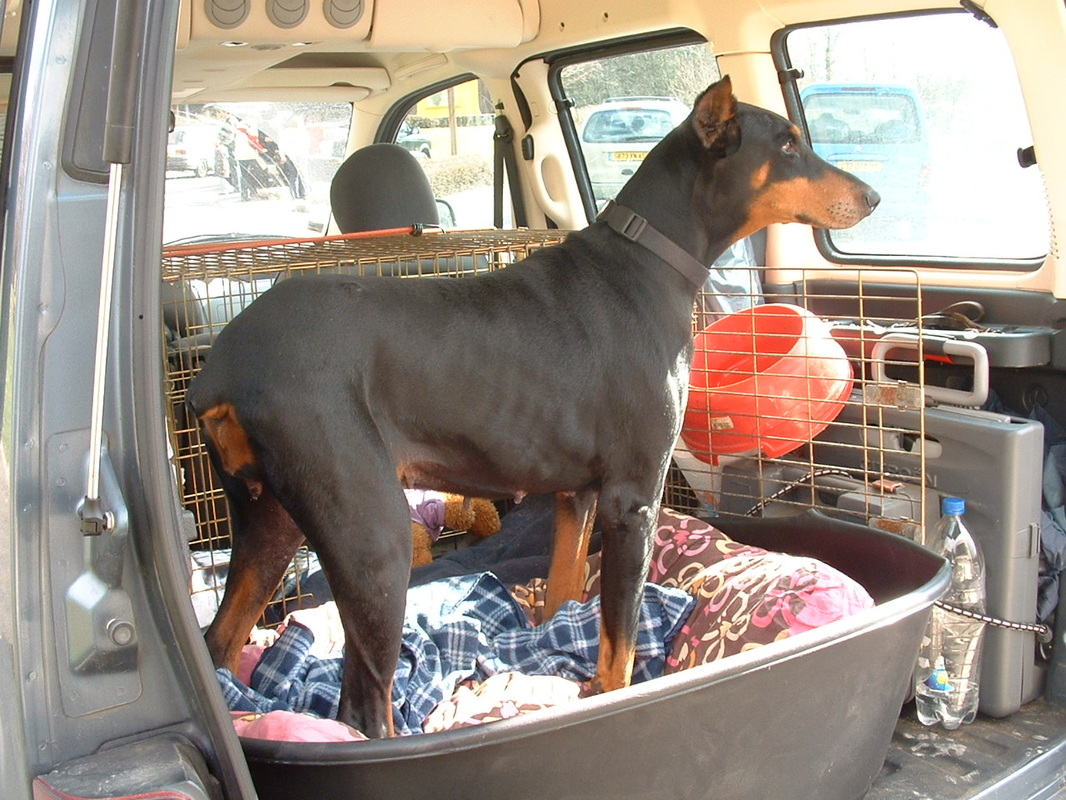 Because of the lack of room in the street of my destination I had planned to drop the caravan at a routier I know between Tours and Le Mans and return there for the night afterwards. Two I passed which appeared to be closed and the third, was no more, converted to a private house.

Thus I arrived in an off road lay-by and dropped the van while Siria had a little wander. All disconnected and ready to roll I discovered that the padlock on the hitchlock had seized. No way was I leaving an unsecured van out in the wilds so the procedure was reversed and it was off to brave the side streets of Le Mans with a bend in the middle and a little more space to find when I got there.

As it turned out the street was every bit as tight as I thought it would be but the place I found 100 metres beyond Siria's new temporary home was big enough for the whole lot and would have been needed anyway for the car alone.

Soon, Siria, bed, bedding and food were unloaded and paperwork checked and delivered and, after refusing on the grounds of time an offer of a drink from the pleasant lady and adult son of the house, I was on my way. But this time straight out of town as my journey round the Le Mans rocade had been every bit as traumatic as Tours. There was some sort of exhibition in town and the traffic awful. I was soon bowling along country D roads in the darkness and heading for La Fleche. Old habits die hard and I ignored a right turn to the town and carried straight on along the truck route. What a stroke of luck. At 8pm I came upon a main road and, while waiting for a space in the traffic, there on my right was the blessed red and blue sign of the holy grail - a routier. And what luck too I thought, as I ate my 4 course meal (kir, wine and coffee compris) in the good company of other drivers, that the damned hitch lock had seized as well.

After a peaceful night spent at the rear of the lorry park I was off in the morning in search of a bar and coffee (no matches in the van, the only drawback of being a non smoker ), and wondrously at the next crossroads another routier, open. It is a well know adage that, much after the manner of buses, you can travel 100 kilometres without a water hole and then find 2 routiers in quick succession.

The journey home was different entirely until I got to Limoges and distinguished by long, straight, fast roads. The only problem, now back in the drizzle, were the 'Harry Potters' arriving in the far distance. Why on earth would anyone driving a dull grey car on a dull grey drizzly morning, not bother with headlights and prefer their 'cloaks of invisibility'?

Home at 2pm Saturday after dropping the caravan in its place and well enough in time for the rugby, much discussed and ribbed about in the bar last night.

Almost the longest trip so far, apart from an Alicante emergency a few years ago, but definitely the longest since Nettie's volunteer register kicked off the current spate.

I didn’t know it then, but she was to be the first of many Dobies transported for PAD. Dobermanns have not always enjoyed the best of reputations but I can honestly say I have not yet met one that was not gentle and well behaved, nor anything but perfectly clean in the car. Later I was to have the pleasure of sleeping alongside 2 of them.

Eventually, Siria was adopted by her new foster mother, Catherine, and, a year so later at the PAD AGM in Brittany, she came to say hello to an old travelling companion. 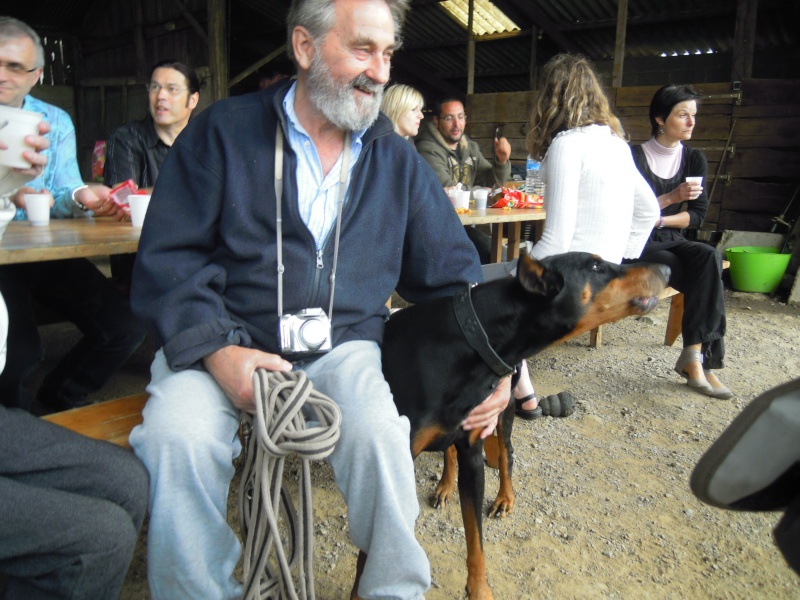