Homecoming. Lira with her broken leg.
Bebe was a small Griffon cross who had been found tied to a post by an English visitor. After he failed to produce any idea and any interest in ownership he was adopted by his kind saviour. Unfortunately she had to return to Cornwall, but before she left she set in train all he needed to eventually rejoin her on the other side of the Channel, including finding a foster home in France for the duration. 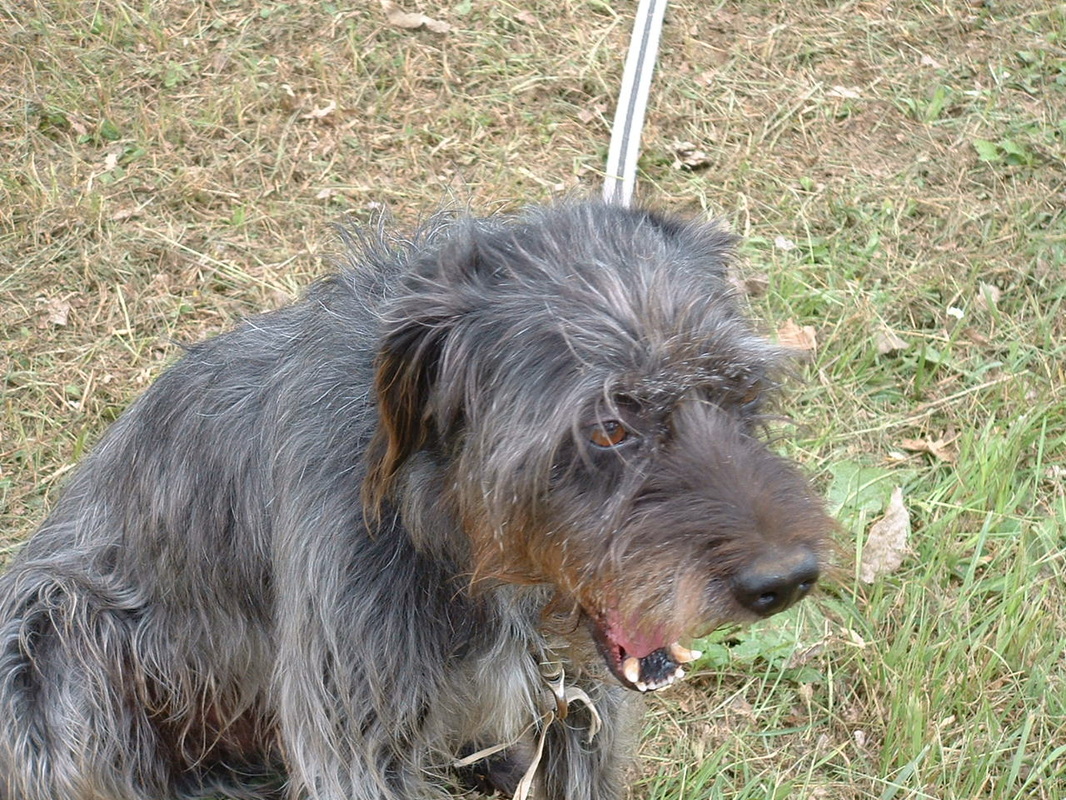 At last, after 9 months, he was ready for the big journey and I was asked to bring him to Portsmouth. Considering the distance I had to travel in each direction, and not wanting to waste the several hours on the ferry trying to be comfortable in a recliner, I insisted that I should do the journey at night and have a cabin each way. Of course this cost more than all my road miles put together and, as Bebe's kind owner had laid out hundreds of pounds already on him, I suggested to her that it might be better if she bought a day return and met me at Ouistreham instead. This she thought a good idea so we arranged to meet in the ferry terminal at 2pm.

My journey down to the village in the Tarn was uneventful and I easily found the house of the English family who had taken on the task of looking after Bébé for so long. They also had 2 dogs of their own and another one that they were looking after for an absentee owner. 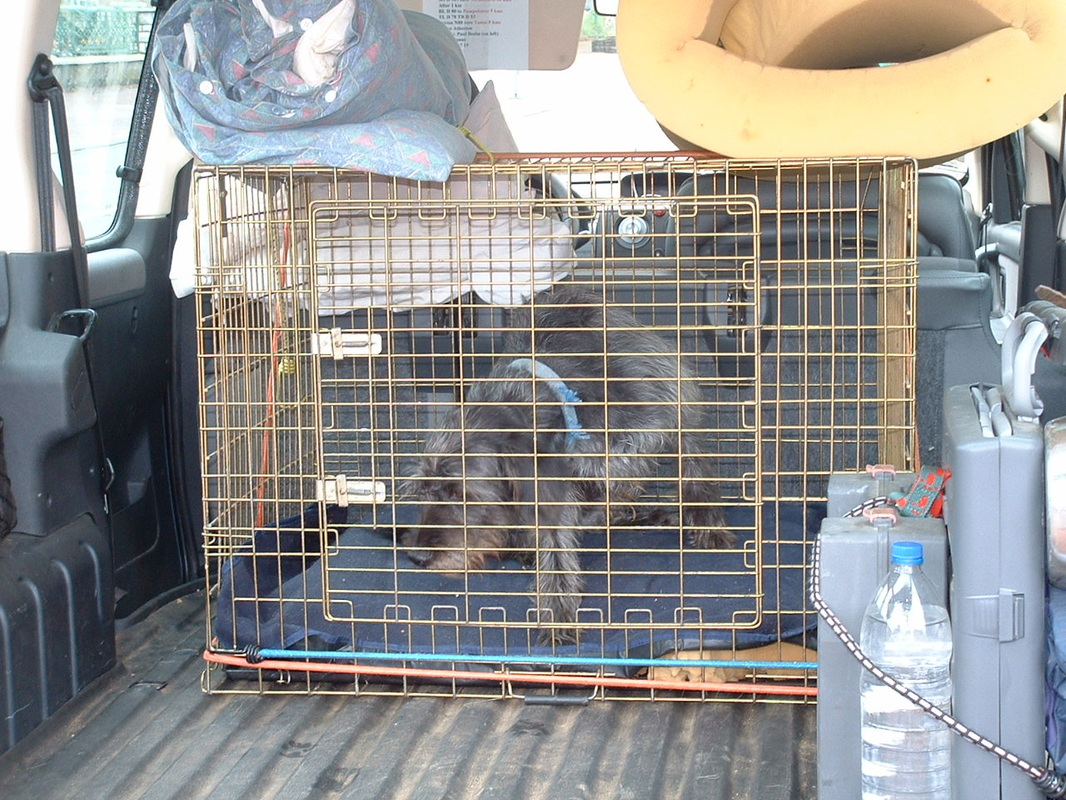 This man had turned up one day and asked if they would take care of his dog for a week or so. As promised he turned up a week later, thanked them profusely and departed. A few weeks after that he reappeared and asked again for a week's board for his pet. No problem, but a week after that he rang to say that he couldn't pick him up straight away and would it be OK for another week or 10 days? Of course it would. Unfortunately that was the last they saw of him - and that was 10 months ago. His name and phone number used to hang on a disc on the dog's collar but it disappeared long ago. Perhaps the dog knows what's best for him.

Anyway, a good run up north, broken by an overnight stop chez nous, where Bébé and Ramona quickly made friends with each other even to the extent of her giving up her priveleged spot next to my bed to him for the night, saw us arriving in the port an hour early at 1pm. 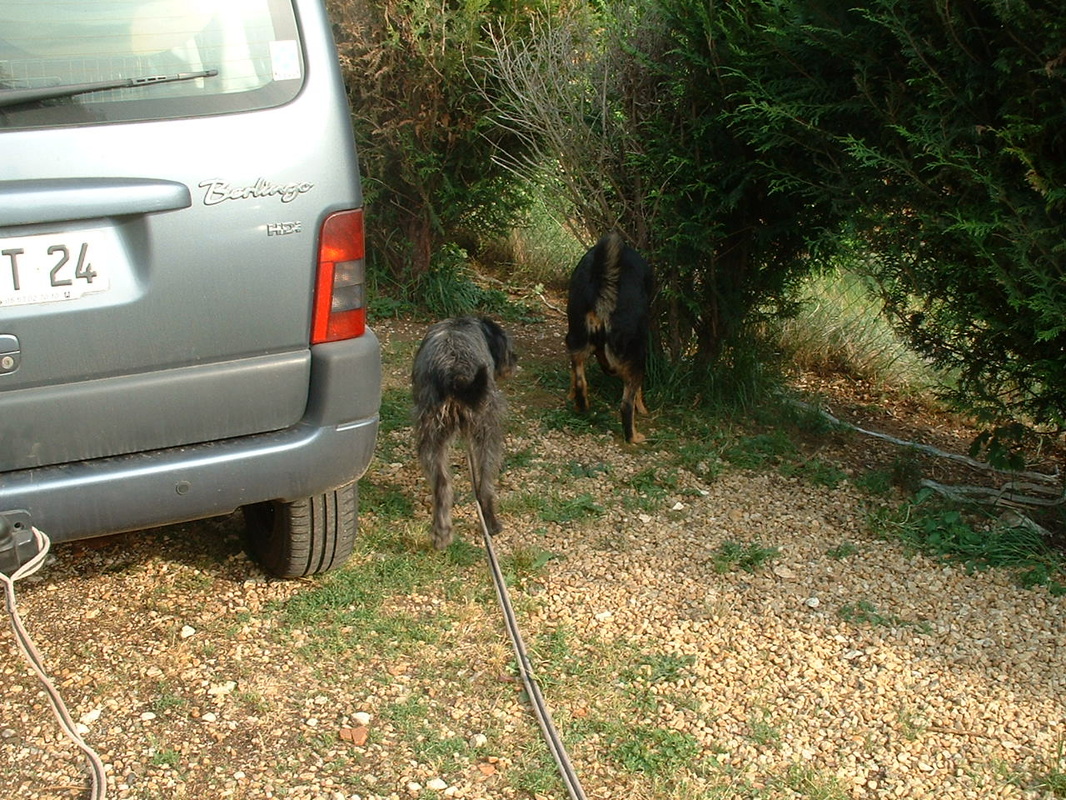 Bébé with Ramona, investigating
Caroline was waiting for us, very excited, after all she had only known him for a week or so 9 months before, but, after a walk on the lunge rein in the sun he happily jumped into her car for the final leg of his journey.

Off they went to check in with all his brand new paperwork and I spent some time in the car finessing my return route, or more particularly to try and work out where I had gone wrong traversing Le Mans on the way up. I had just started the engine, ready to go, when the phone rang. It was Caroline in the terminal with a serious problem. The Brittany staff had picked up the fact that Bébé, though previously vaccinated against rabies, had not been chipped until a week after the vacc. to which his subsequent blood test referred. And that is against the rules, it must be done the other way round. This is to ensure that the chip number is known at the time of the injection, and marked accordingly.

I was at a loss to advise, at first I said that she go into the town immediately to find a vet to re-inject him. But then realised that that was no good, he would then have to wait in France for another 7 months for the whole process to be completed again and I had visions of carting him all the way back to the Dordogne to give Ramona a welcome companion again.
Instead I asked her to see what the staff will suggest and, while she did that, walked into the terminal to see what transpires.

The really helpful lady on the counter, speaking perfect English, was on the phone to DEFRA in Dover for their advice. After a long conversation Caroline could breath again, DEFRA said she could travel and gave her a 'conversation number' to produce in Portsmouth should she have any trouble landing there, but she must visit a vet in the UK and start the whole process alll over again if she didn't want the possibility of similar trouble the next time she wanted to cross northbound. Greatly relieved she went back to her car and onto the ship. I was greatly relieved too, though must admit to a touch of regret that I would no more have such a well behaved travelling companion. 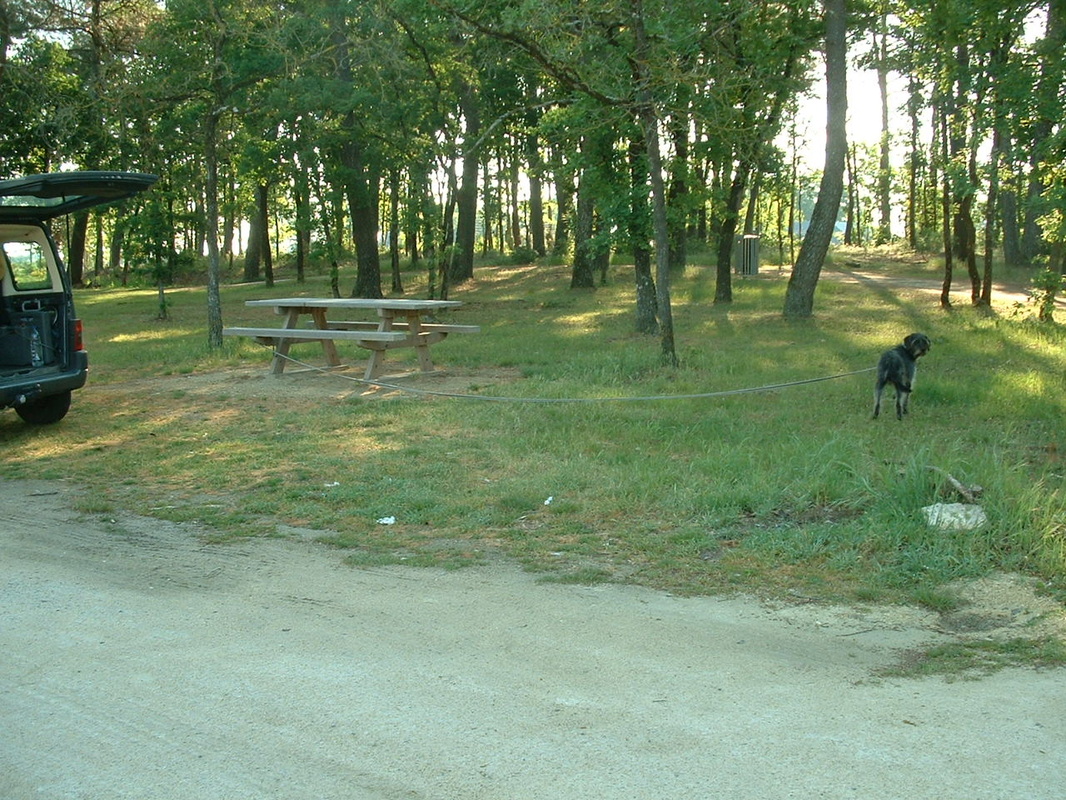 On the road again, and my belated study time produced a trouble free run through Le Mans to my destination for the night, Le Point du Jour, a routier half way to La Fleche where, with La Patronne and other drivers I sat outside in the sunshine with a refreshing cold kir. A good meal, good company, and an early bedtime to read a while. I never finish what I am reading but usually wake briefly around midnight to put my loosely held Kindle away. Good job it switches itself off after a short while without a page turn.