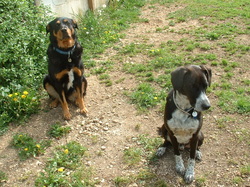 Ramona, left, and Bosco. Our last two official fosters
Another Dobie. This time Eros, a young lad who was living happily with his master in the Paris area when one day tragedy struck. His master was badly injured in a motorcycle accident and lay close to death in hospital. Death didn’t come but the injuries were so severe that it was plain he was not going to be able to return to his former life, and to Eros. 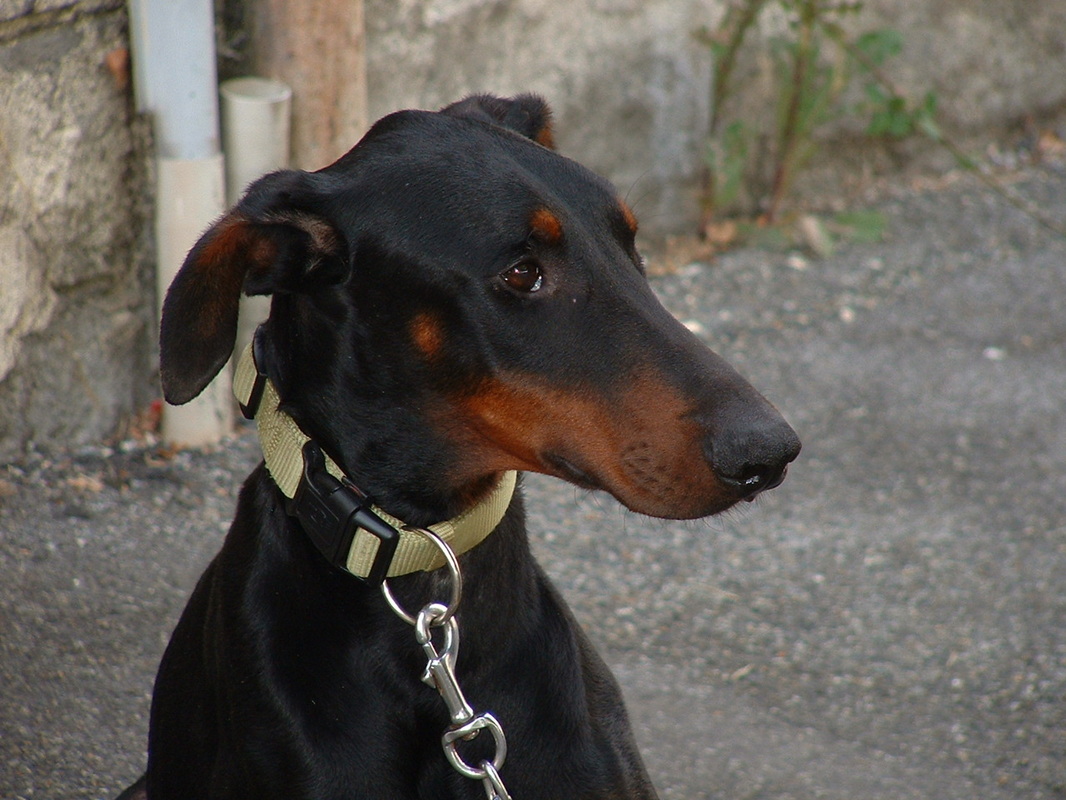 Eros was taken into a pension, paid for by PAD, the Doberman rescue association and the search was on for something more suitable. He didn’t like it much where he was, too much noise and bustle, and so it was a welcome opportunity when PAD member Virginie in far off Bordeaux offered temporary fostering. Temporary, because she already had a young family in a small suburban house and several other Dobies sharing it. Soon a co-voiturage of volunteers was organised to get Eros down to her and there he was, happily living with his new friends, when I became involved.

Monsieur Cassagne is a PAD fosterer who lives in Pau. At first sight he would not seem to be ideal. He lives in a small flat near the centre of town with a tiny but secure space outside his back door. What he lacks in space though is made up for in his enthusiasm and love for the breed and his own pleasure of walking his dogs, he recently lost to old age his last companion, several times a day in the nearby parks and open spaces.

I set off one sunny mid morning for the three hour journey to Le Pian Médoc, to the north of Bordeaux. I pride myself on always being on time and was only slightly worried as I approached the rocade where I was to turn north and then west to cross the Garonne over the spectacular Pont d’Aquitaine. I have passed this way many times in the past and on occasions the traffic progress has been very, very slow. However I needn’t have worried, it wasn’t the rush hour and I sailed over without a pause. It is spectacular, the view on one side across the city and the other the estuary of the Gironde stretching away to Royan and the Bay of Biscay. Not as spectacular from a car as it is sitting high and mighty in a wagon, but I have seen it from both viewpoints and never tire of it.

Back to concentrating on the exit numbers. I had planned my route and listed the names of the avenues and roads that I needed to turn into on the visor above my eyes and was confident that I would be early. After leaving the rocade I soon saw a landmark that I was expecting, a Renault dealer and knew that my left turn was only 100 metres away – but it wasn’t there. I couldn’t, and can’t, explain it but the road just wasn’t there! So I continued on for a little way hoping to pick up a clue. When I was driving professionally I never travelled without a whole bagful of city street maps, not just of France but of every adjoining country that I might be called on to journey to. Bordeaux was no exception and I would have soon been back on track but since I bought my laptop some years ago I have discarded the paper which by the time I finished weighed a ton, or seemed to. I don’t use satnav, don’t trust it, and in any case have usually found a better way than that predicted by either Google Maps or Autoroute, but I do have with the latter a plug in GPS locator, just in case. So I fired up the machine and plugged it in. At first it gave me my position but, before I could relate that to where I wanted to be, it failed. I have no idea why but there it was. I tried a couple of turnings and asked a couple of residents but no-one knew my destination. Then, my saviour, McDo’s. For those who know of my aversion to this ‘food’ source that may come as a surprise, but they do have free wifi and for the price of a cup of coffee I was soon, via Google, back on track. A quick phone call to Virginie and then I found the place, half an hour late. I discovered something useful, once Google Maps was on my screen it stayed there, even after I moved away from the wifi signal. I was even able to move the map along to check my progress. Bizarre numbering by the way. Only a few hundred metres from her house I was at 473. A little further on 200. Finally I got to the end of the road, number 17, and next door, on the corner, number 7. Jean-Luc was in the garden, gesturing me to drive round the back.

Virginie had asked if I would like to eat with them. I had politely declined, saying that I would have a long way to travel, and in any case I normally only had a snack midday. She said that that was all they had, so I accepted. When I got to their small house I was invited in and offered an apero, declined, apart from water, and shown to a seat. They had cooked some stir fry vegetables in a wok and there was fresh bread on the table so, as we sat down, I tucked in. A fine snack I thought, but then I noticed that Virginie was fetching something else to the table, cold roast pork. I chose the smallest piece. That finished, there was cheese, I had a little with the delicious bread, but finally drew the line at the yoghurt, despite being sorely tempted. Some snack! 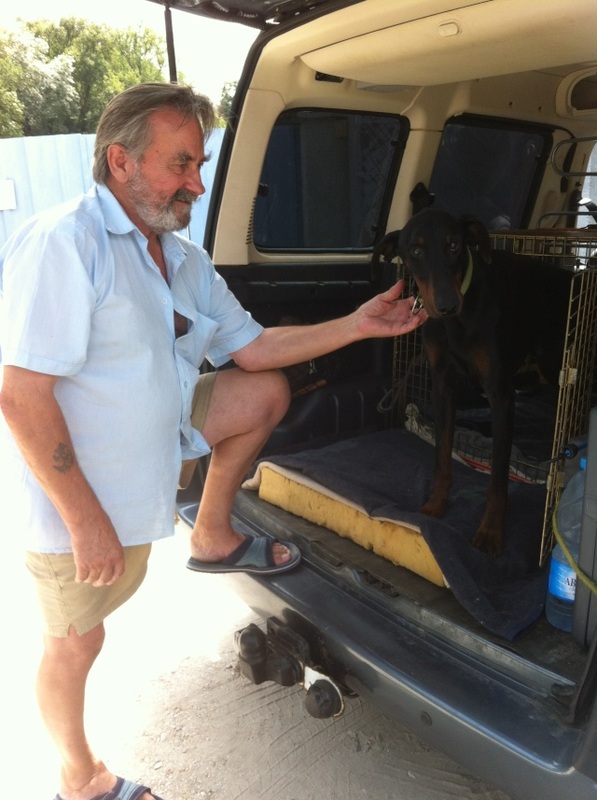 Sadly we walked to the car, with the Dobies in close attendance and, once obediently inside, Eros sat quietly while Virginie took some pictures. Then we were off. No trouble finding my way back to the rocade, a right turn and another for the A 63 and then again to leave in the direction of Mont de Marsan. The road to Pau is clearly marked and the long straight roads of the Landes requiring keen attention as vehicles without lights loom from the grey distance. This is one of the few areas where I approve of daytime headlights and switched mine on.

In Pau my directions were clear. After the rocade the first big roundabout required the 4th exit, the Boulevarde d’Alsace Lorraine, and then the road I wanted was 6th on the right. Easy-peasy. Not so, the 4th exit was not the Boulevarde but I took it anyway and continued to where I turned left at some lights. I knew I had come too far so it seemed like a good idea to turn left again and see what transpired. I thought longingly of my Pau street map back home but immediately came upon a major road. I stopped and read the sign opposite, Boulevarde d’Alsace Lorraine; I couldn’t believe my luck, turned right and soon found the road and address I wanted. M. Cassagne, pre warned by Virginie of my delayed ETA, was waiting in the road with a space at the kerbside reserved for me. Eros was loose in the back, with the choice I normally offer to larger dogs of cage or open space behind it, but, although he had been calm and well behaved on the journey I took the usual precaution of reaching in through the side door and clipping him to the 8 metre lunge rein. Good job that I did for, as I opened up the back door he shot out like a bolt from a gun and had used 5 of the 8 metres before I was quick enough to grab it. His momentum carried him on in a wide arc which brought him round into the street until he banged against the side of the car. Thank goodness in this small city centre street that there were no cars passing at that moment. M. Cassagne was most concerned and sat him on the pavement as we both spent some 10 minutes or so calming him down. He was clearly terrified but after a while followed reluctantly, now on a chain lead, through the doors and into the ground floor flat. 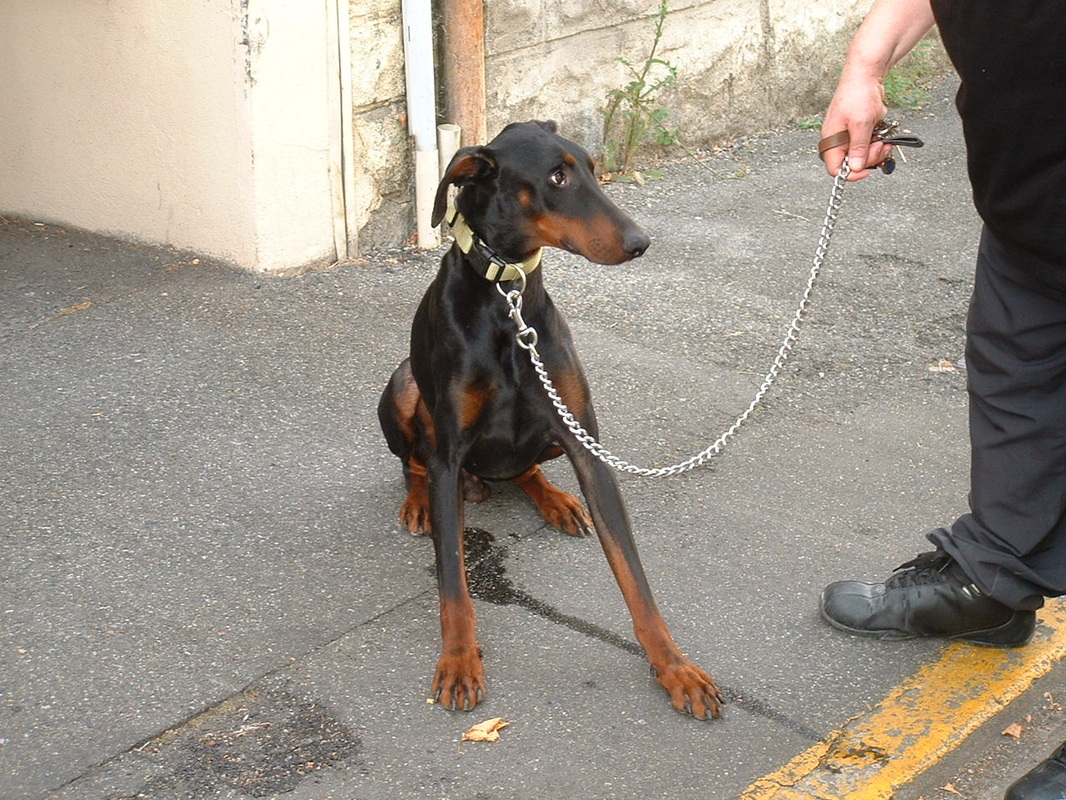 Once inside he sat again, nervously as we continued to talk to him. He refused water, and the new Kong toy bought specially for him. M. Cassagne confirmed that he was here as a foster but, in answer to my question, nodded his hope that it might become permanent. Sadly it wasn’t to be. They gave it a go for a week or so but Eros plainly didn’t like the city bustle and noise any more than the refuge in Paris and was returned to Virginie with a relative making the journey for a short holiday. There he remains, still looking for his permanent home. 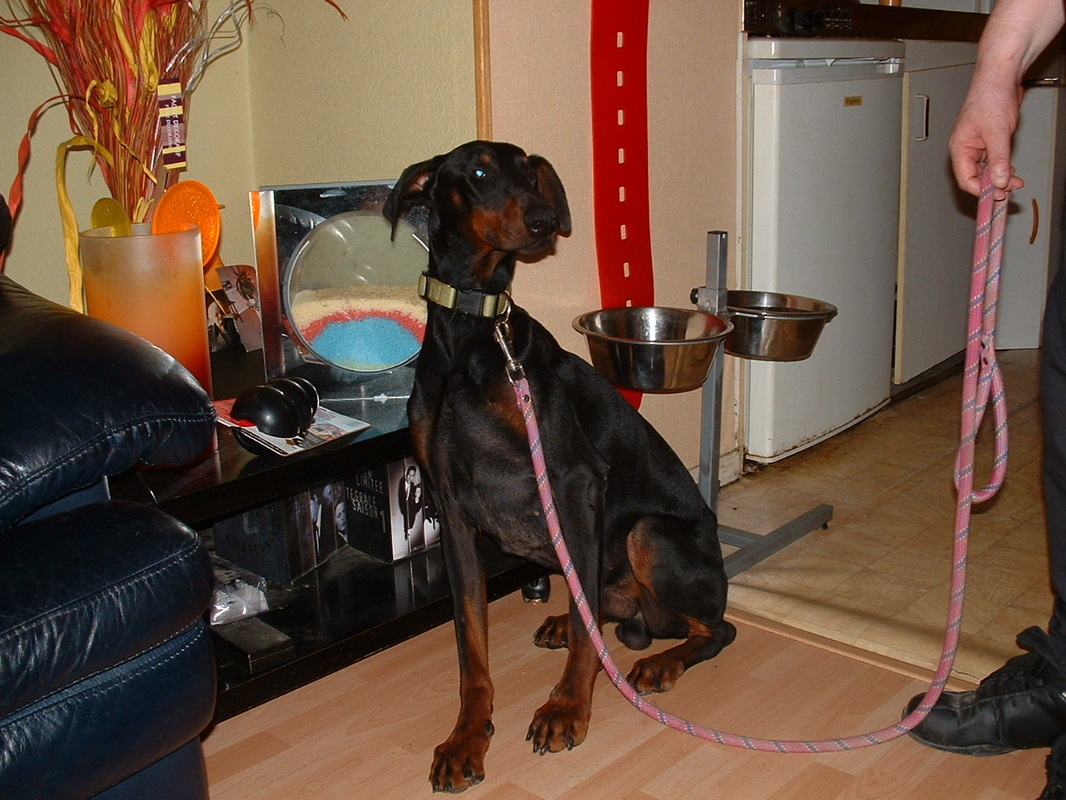 As for me, intending to stop at a routier next to the A 62 near Marmande, I was ready due to my delays during the day much earlier in the hamlet of Lusson, where I found Chez Maman waiting at the roadside. Enough. Parked up and car reconstituted from dog carrier to person sleeper I settled by a welcome cooling open window in the restaurant to dine. Most of the half dozen or so drivers on the park had already eaten but it only needs one willing soul to turn a meal into an event and the two of us nattered about things that concern transport drivers long after the excellent repas was finished.

My mate was up before me and left with a cheerful wave as I secured the dog cages inside once more, a quick couple of petit cafés, and I too was on my way to arrive back home three and a half hours later.