Why a record breaker? Well, simply because as a direct journey his was the longest that I had accomplished so far. Previously I had taken Barney the Otterhound from Argenton sur Creuse to Bath and that was in the region of 2,195 kms, only just pipping Astro from the Dordogne to Holland at 2,186 kms. But Moka was by far the longest. An international delivery like the other two he came in at 3,474 kms,  from the Charente to Rothienorman, between Aberdeen and Inverness. 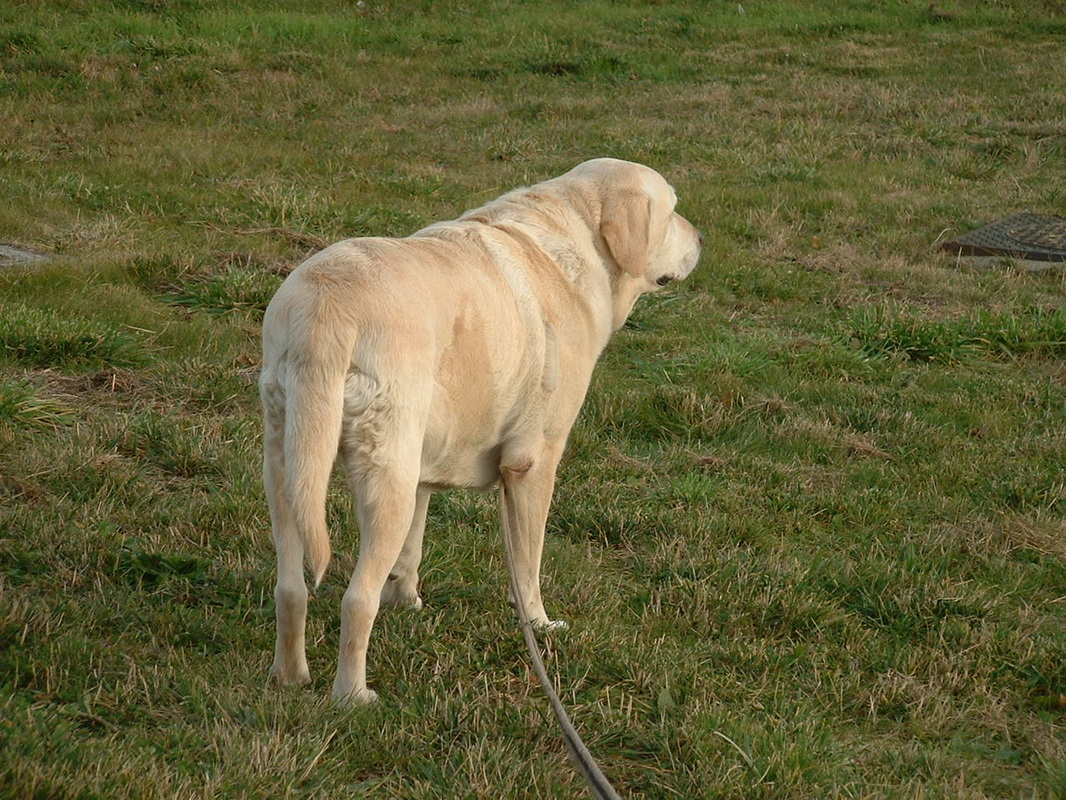 As with other journeys which require a day's journey to park at Dieppe for a morning ferry, I got myself within half an hour of the collection point the night before. That way there is a minimum of delay before the real roadwork begins so that I can arrive in good time at my goal, the routier on the old docks in the port, and time to eat a great meal before a walk with the dog and an early night. 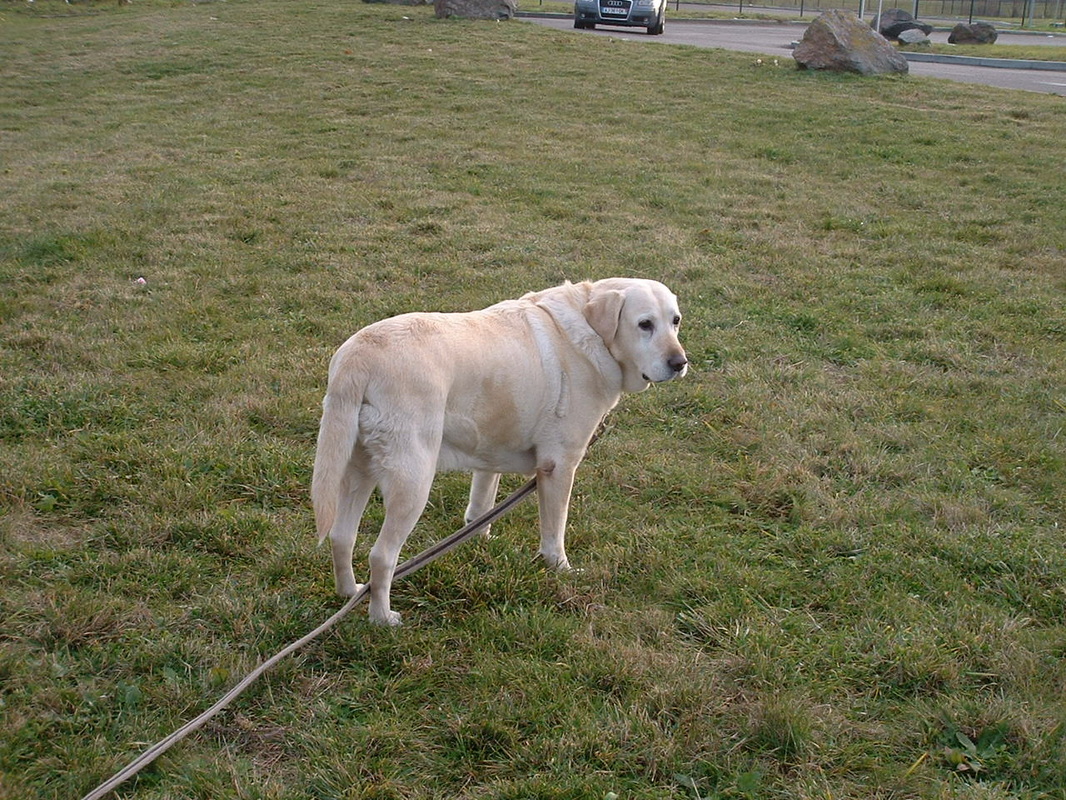 Thus, after eating at home I set out at 11pm for the one hour journey to St. Aulaye on the Dordogne/Charente boundary where I found a nice quiet spot in the centre of the town before leaving in the morning for the 10 minute drive over the boundary to a house out in the country near Bazac. There I found Simon with his own various animals and a great big blond Labrador. This was Moka. 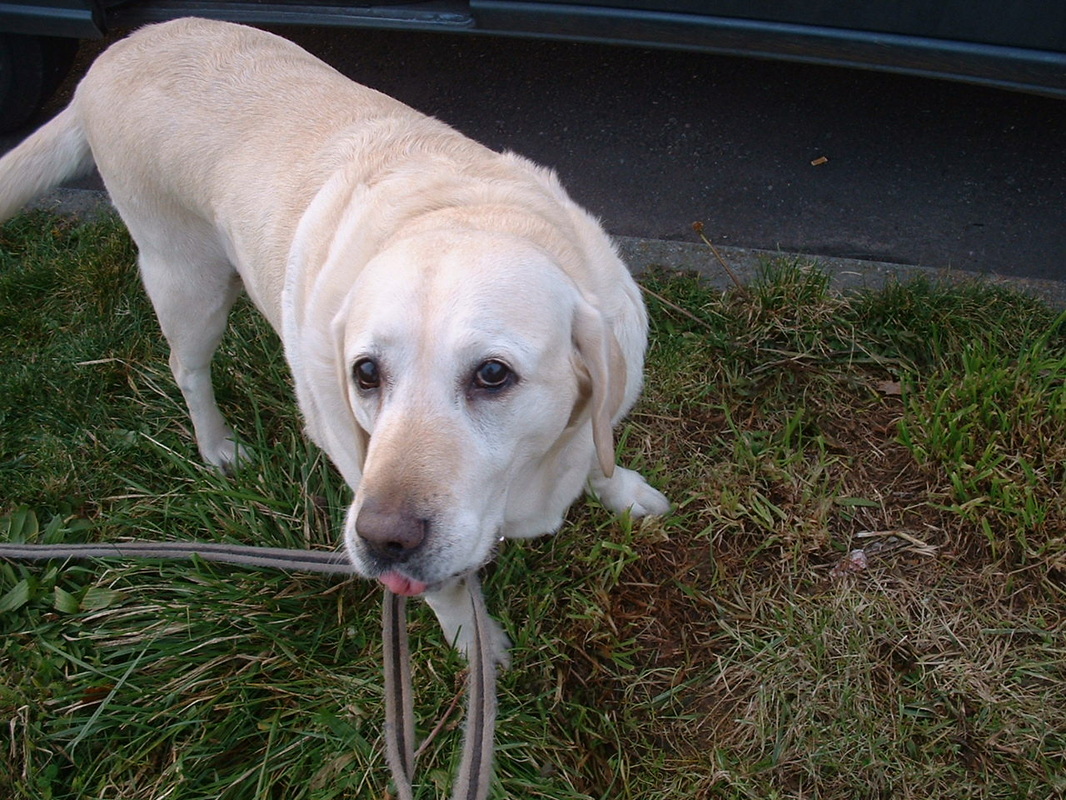 Moka had been owned by his friend who had sadly recently died and was looking after him and arranging his travel formalities before sending him on to his friend's daughter who lived in the north of Scotland. She knew Moka from visits to her father and was keen to adopt him and introduce him to her own family to live with them.

So it was that at 8 that morning I pulled up outside the lonely house and met Moka for the first time. He climbed readily into the car with the cage folded away. He was a very big dog and I preferred to give him more room initially. I would keep an eye on him and any sign of a tendency to join me in the front or to chew the seatbelts and I would have to secure him in the large cage. That did not become necessary at all over the whole of the 3 day journey, he was the model of a well behaved and obedient passenger.

We stopped a couple of times on the road north for water and a walk round and then arrived at the routier in Dieppe dead on time at 7pm. The restaurant opens for meals at 7.30 so there was just time to give him his food (which he refused) and a walk around the deserted dock. After the meal, during which I palled up with another semi-retired driver on a regular run from Calais, all three of us walked around again before my new friend peeled off to his own vehicle on the other side. Shortly after that we were both tucked up in our respective beds.

Check in and boarding were without incident, always a nervous moment when wielding the chip reader, and then on our way to Newhaven. There the border controls were light and rapid and off we went to the north. My target for today was a small transport cafe, a disappearing breed in Britain these days, The Cedar Cafe at Grantshouse which is between the border and Edinburgh. They close at 8pm but I had phoned ahead and the proprietor had said that they would save me a meal if I was running late. No such problem as we rolled, at 7pm, into the small car park off the large lay-by created when the A1 was diverted many years ago. That was good for the cafe. The car park being too small for HGVs, the lay-by provides a handy and large parking area for diners and overnighters alike. The meal, of Aberdeen Angus steak pie with all the veg and delicious gravy followed by apple pie and custard would have graced any routier south of the Channel but the expected reply to my hopeful question 'wine?' was answered with an amused shake of the head. I declined a pint of tea(!) and chose a nice glass of cold water instead. Again Moka refused his croquettes, like me he took only water and we were both in bed very early. 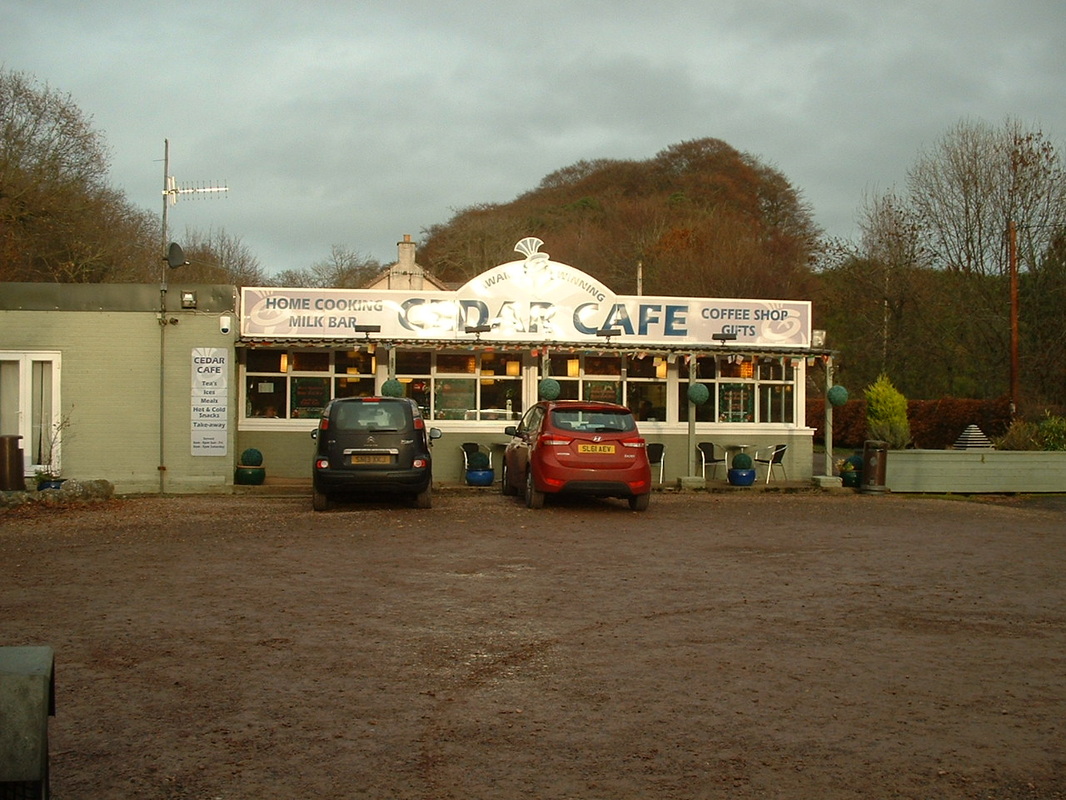 All the way through France I had been hearing warnings of very high winds through the north of England and Scotland. In fact speeds of 80 mph plus had been bandied about and, although there had been no sign so far, I decided on a very early start the following morning to try and beat the possible closing of the Forth Bridge. Thus we were off at 3am and had a trouble free run to the capital. Very few vehicles on the road, mainly night trunk lorries, and I hoped that those approaching me had passed over the bridge, an indication that it was open. The wind was gusting a little in exposed parts but nothing to worry about. My worry for the bridge was that the police would stop high sided vehicles and caravans and, although my Teardrop is extremely aerodynamic and indeed slightly lower than the car, some jobsworth might just have said caravan, no go.

Although accustomed, in my heavy vehicle days when venturing this far north, to driving right through the centre of Edinburgh, with such an absence of traffic I plumped for the quicker route via the southern by-pass and arrived at the bridge with no incident. Once there, it was deserted, not a single vehicle other than me – and no police. I sailed over in perfect harmony with the environment and hardly a breath of wind to help or hinder my passing. In fact, I had such a good run that I pulled up at the house of my destination at 7am, well before the between 8 and 9 that I'd estimated to them in a phone call the night before. All the lights were out so I decided not to disturb them and, after a walk round the block and a little park, we returned to the car to wait for signs of life. At 8 the lights went on so I made our presence known and soon his new family were making a big fuss of Moka as he at last tucked into some food, his first since leaving the Charente 48 hours before. 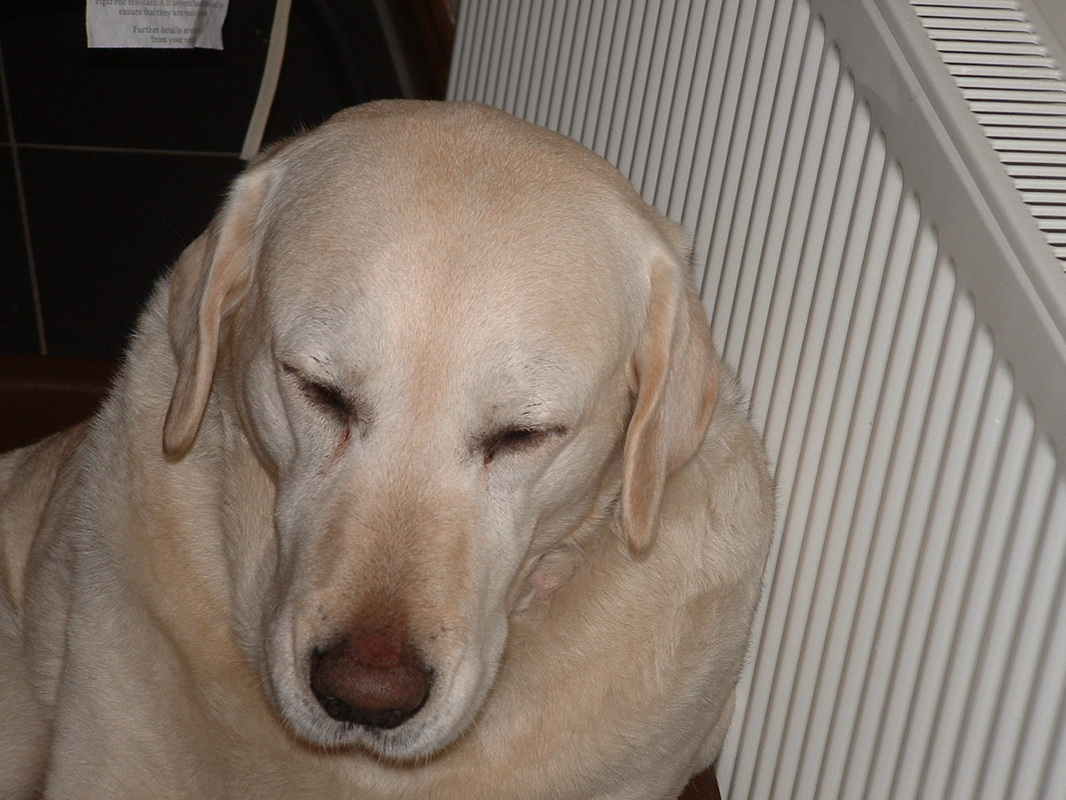 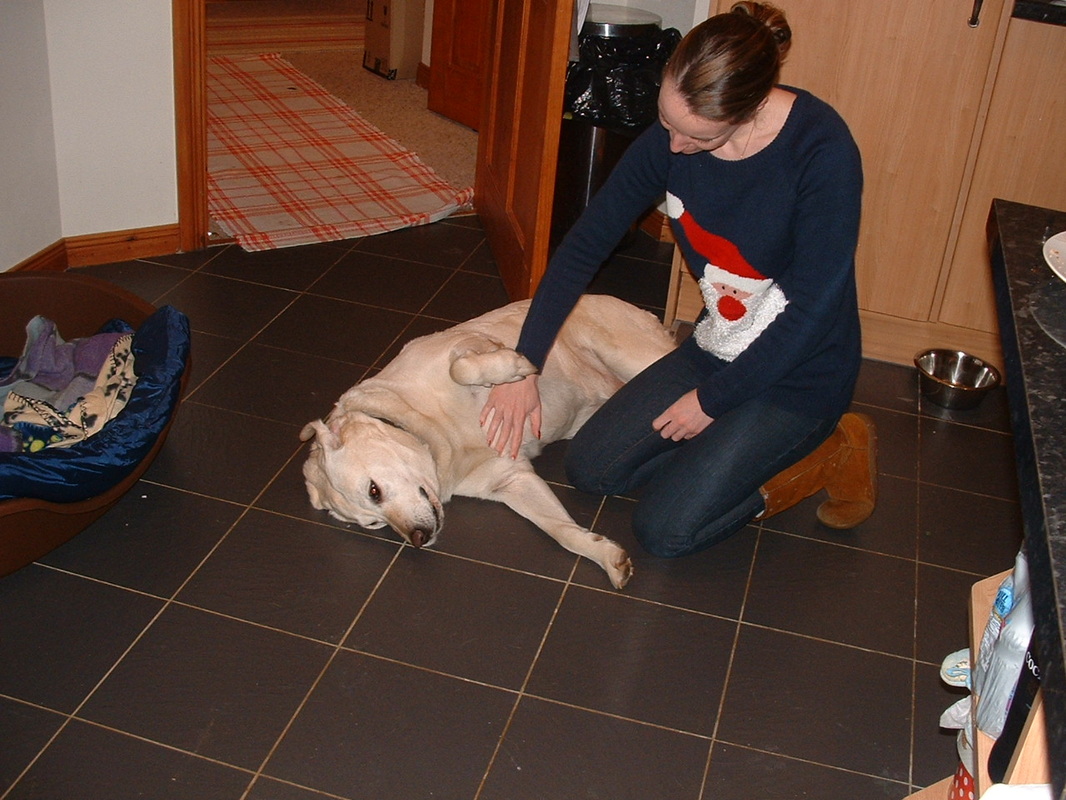 The hardest part of my trip had been the last 5 miles or so on a country road without clearly defined kerbs, just grassy tussocks. My well lowered and right dipping headlights gave me no help in the dark and I had had to concentrate hard on keeping to the left of the oncoming lights. No such problems on the return, now light and still in the absence of any wind I sped on south still thinking of spending a 2nd night at the Cedar Cafe before an easy run down to Sunderland to look up friends. However, I made such good time again that I pulled up at the cafe at 1pm, far too early to stop for the night, or even eat a full meal so, over a snack and a (small) tea, I rang ahead and arranged to arrive a day early. By 7pm my friends and I were walking from their sea front house the 5 minutes to the yacht club for a pre-dinner drink. The place was empty but on spotting the Guinness pump I asked for a pint of that. They had none so I settled for a bottle of local brew and very nice it was too. 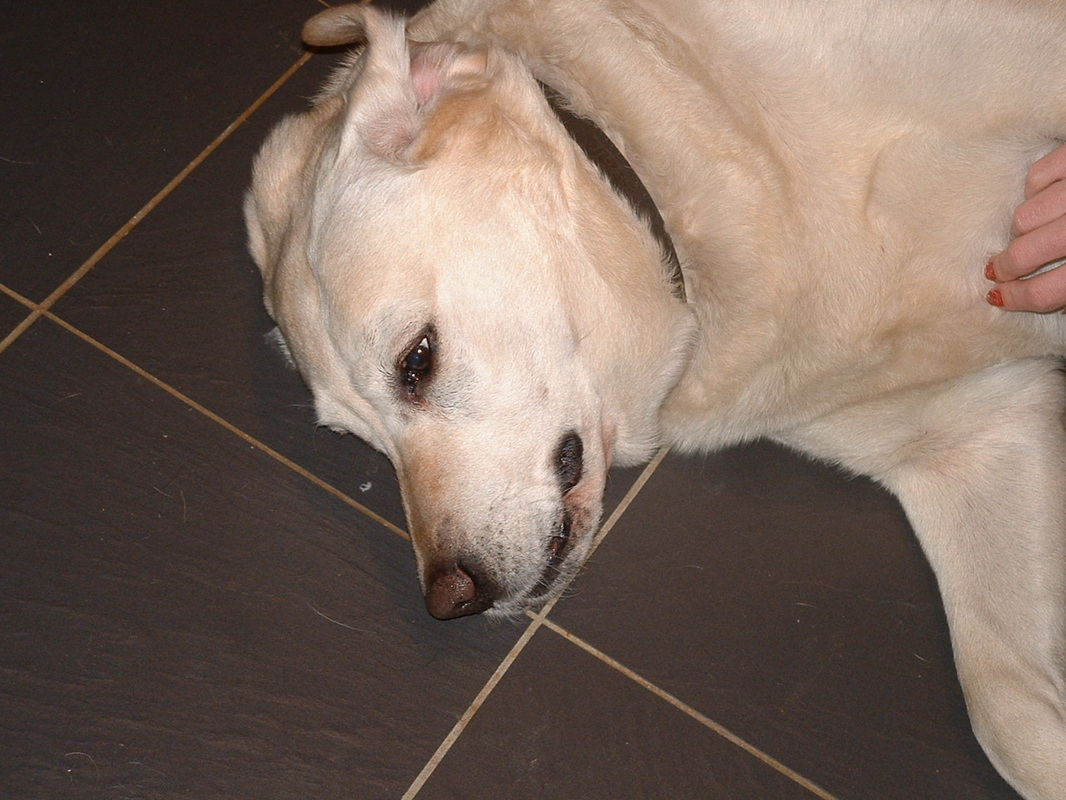 Another easy day just down to Nottingham to stay with more friends and look up family before returning to Newhaven. The reason for my leisurely progress was purely financial. I try to keep the costs down for my 'clients' as far as possible and only choose the cheapest sailings. Thus my return to Newhaven the next day was still 24 hours early so I ate in the port restaurant and settled down in terrible weather to read and listen to the radio till departure time. It was a Saturday night and I had enquired the day before if I could book on that night's boat but the cost was too high, however, it made no difference, the gathering storm cancelled the sailing anyway. I finally returned on the Sunday boat and, by the time we got to sea the storm had abated completely. I arrived home, as planned, on the Monday night, still musing on the irony of all the rush north to beat the violent weather predicted only to find myelf marooned in Newhaven because of it arriving late and much further south.